There’s a lot we could talk about but I’m going straight to the main topic of this report - birds! If you’re feeling down I suggest a good walk in nature with the addition of finding some birds would really help pick you up. At least it has helped me and I hope it works for all you too.

I forgot to mention two items in my last two reports. One was how special it was to bird in the Arb on Christmas morning. Can you guess why? It really wasn’t because of the birds but it was because of the quietness. There was little to no traffic, especially trucks, on the beltline. It was amazing. Secondly I forgot to tell you that seeing a sundog is thought to bring good luck in the annals of folklore. Therefore I’m expecting to have a great birding year. I’m not sure seeing a sundog second hand, from what I showed you in last week’s report, counts but if you have a good birding year you’ll know why.

Birding has been a bit slow this past week. The best place to find birds in the Arb is still at Spring Trail Pond (aka the Duck Pond). I went there today and saw a couple of my favorites, the Fox Sparrow and the White-throated Sparrow but I did not see our visitor from the west, the Spotted Towhee. If you like Mallards there are about 100 of them there and they do quack quite often and loudly too.

In the main Arb this morning the best birds I had were Gadwalls and the Great Blue Heron both in the outflow of water from the Big Spring. The heron was standing in the water mostly hidden by low hanging branches of buckthorn. However this time it was on the left side instead of the right. To finish the morning I saw a Pileated Woodpecker in a tree right next to Teal Pond. When it saw me it took off and flew over Teal Pond and got lost in Lost City Forest. I couldn’t get a photo of the Pileated but a Downy Woodpecker obliged me.

There haven’t been many American Robins in the crabapple collection recently. Did they eat all the good crabapple or what? I did see 36 over by Skunk Cabbage Bridge. They seemed to be feeding around the small creek that runs through that area. A robin stopped to be photographed and since it did such a good job of holding still while I took its photo, I promised the robin that I would share the photo with the birding group.

For many days now there has been only fog and overcast skies. On Saturday the clouds parted a little to expose a bright, shiny object. I’m not sure but I think it was the sun. While it was out in the open I heard for the first time this year a Northern Cardinal sing. It was such a welcome sound it brought a smile to my face! I looked around and found it at the top of a tree singing its heart out. Today I heard another cardinal sing its song. Attracting females and establishing territories start early for Northern Cardinals.

The last two birds I would like to mention are not Arboretum birds but are found in Dane County. The first is called a Long-tailed Duck and is a rare winter visitor from the far north. I actually saw three of them near where Upper Mud Lake drains into Lake Waubesa. To see them well you need to walk out on a relatively new boardwalk in that area that is part of the Lower Yahara River Trail. I have included two photos of the ducks. They are in winter plumage with dark brown and white parts but don’t have long tails. One of the photos shows all three swimming on the surface. These are diving ducks and the second photo shows one Long-tailed Duck underwater having just submerged. The second bird is an American Kestrel. When out driving in the countryside look for single kestrels perched on power lines. I saw this one on a line in the prairie parcel of Pheasant Branch. It was preening while I watched it. It spread its tail feathers at one point and showed off its beautiful tail feathers. I just happened to capture that moment.

The last photo is an ice photo taken at Teal Pond a few years ago. I liked it because of the colors and that it included oak leaves, a leaf skeleton, duckweed and plant seeds. 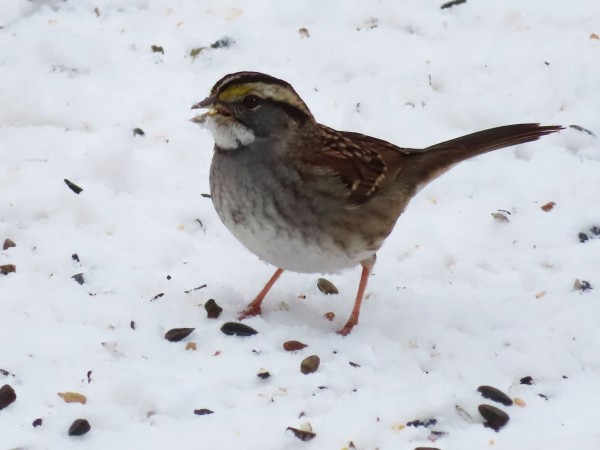 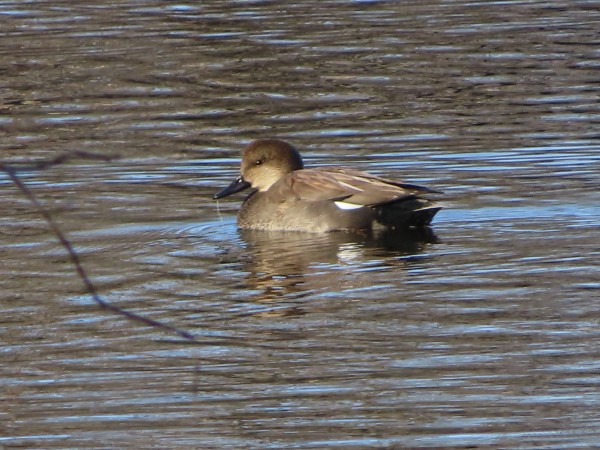 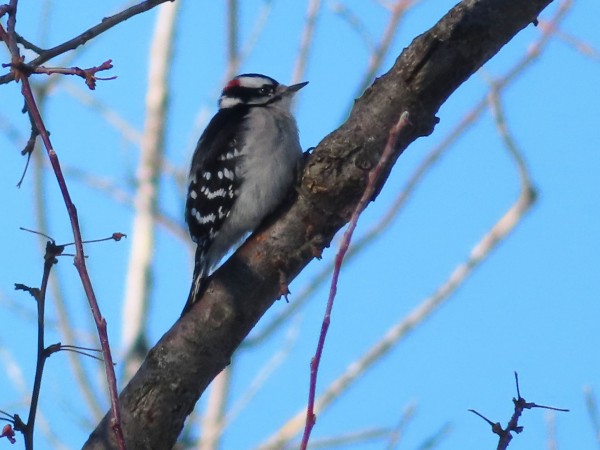 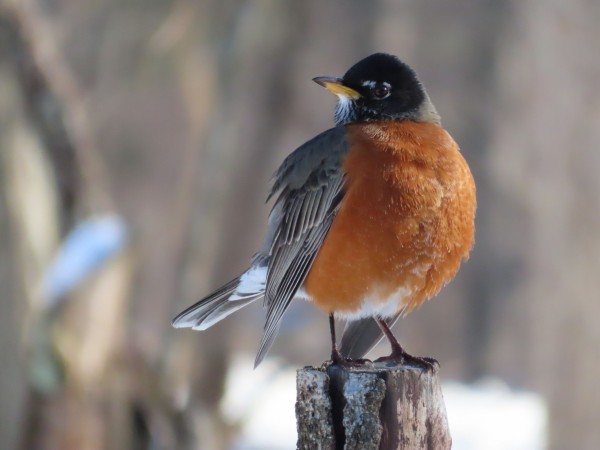 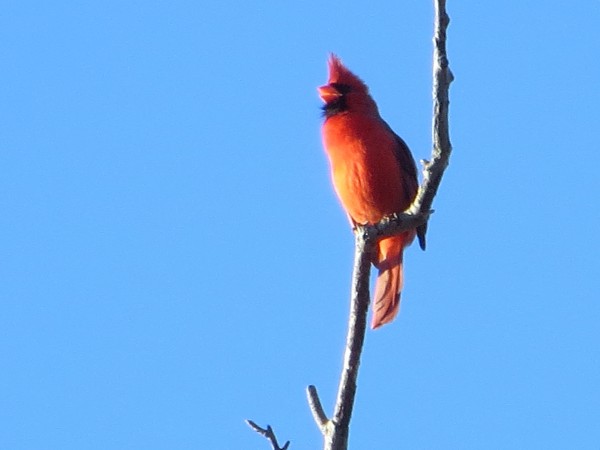 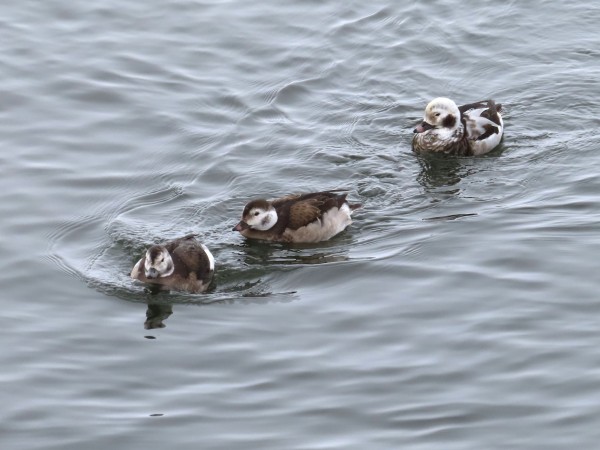 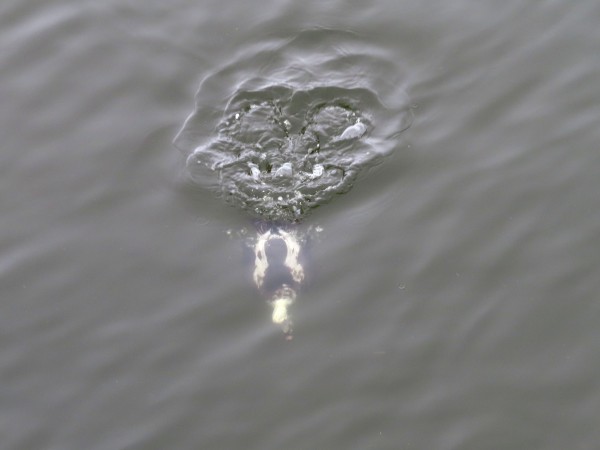 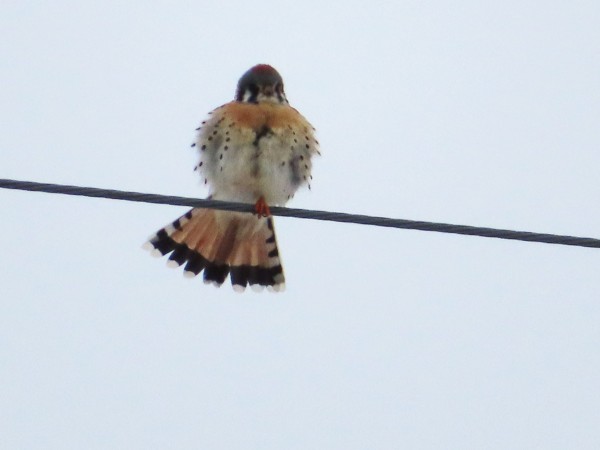 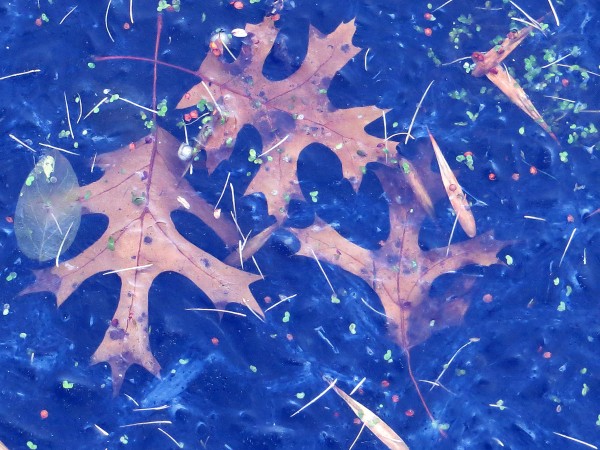