February 1st and one month closer to spring and spring migration. With all the shoveling and snow blowing I did yesterday I’m ready for spring. The worst part of yesterday was when I thought I was finished and went inside, the snowplow came by and dumped a 3 foot bank of snow at the end of my driveway.  Ah yes, winter in Wisconsin. But today I went birding in the Arboretum and all the new snow turned the Arb into a winter wonderland. All the trees and dried up wildflowers were flocked with snow. It was magical so we must take the good with the bad.

By the way did you hear that a Snowy Owl was spotted in Central Park in New York. One had not been seen there for 130 years or since 1890. I’ll bet that was a lifer for a few people, a few million that is.

The best recent day of birding for me in the Arb was last Thursday when I saw 23 species which is a great number for me in winter. As I drove in on MacCaffrey Drive 16 Wild Turkeys had just flown down from their nightly perch in the pine trees and were now sauntering down the road oblivious to my car behind them and in no hurry to move aside. Four American Crows were perched in the usual small dead tree welcoming me to the Arb. As I started my walk to the east I saw a Red-tailed Hawk at the top of one of the Burr Oaks looking for breakfast below. In the distance, probably near Teal Pond, I could hear the Pileated Woodpecker calling and a few minutes later it came flying out of the woods and continued to the west over Curtis Prairie.

I next went up to Juniper Knoll to see if the Barred Owl was perched on a branch in one of the junipers. Sure enough it was there. Recently it really has been putting a lot of branches between itself and my camera so my photos have been really poor. I pulled out a photo from the past to attach to this message to show a Barred Owl more out in the open. This photo can be interpreted two ways. Either the owl is giving me an evil eye and threatening me with its foot raised and talons exposed or it is just scratching its chin. Note how sharp the talons look. I would think scratching its chin with those talons would certainly draw some blood. From there I walked to Icke Boardwalk. As I looked around the marsh for birds 52 American Robins flew over heading east. Impressive number for winter! A couple minutes later 4 Pine Siskins flew into a European Alder near me to extract some seeds from the female catkins. Next I went through Gallistel Woods and saw two common woodpeckers, the Downy Woodpecker and the Hairy Woodpecker. The Hairy is a bit larger than the Downy but when not perched side by side that is difficult to tell. The best way to distinguish them is by the relative lengths of their beaks. If you use the beak of the woodpecker to measure the front to back length of the head and it is two beak’s worth, it is a Downy Woodpecker. If it is one or slightly more than one beak’s worth it is a Hairy Woodpecker. Try it and see if that works for you.

As I walked along Arboretum Drive and some houses with bird feeders I saw a couple winter only birds, the Dark-eyed Junco and the American Tree Sparrow. I also saw a pair of Tufted Titmice and American Goldfinches. At Skunk Cabbage Bridge I caught a glimpse of a skulky Winter Wren. Just beyond the bridge I spotted a Brown Creeper creeping up a tree trunk. The brown body speckled with white dots as well as a down-curved beak gave away its identity.  A fellow birder told me that the Brown Creeper makes its nest between the bark and trunk of a dead tree. That sounds like a tight squeeze for the little ones. I walked through Wingra Woods to Big Spring. In the outflow there were 12 Gadwalls and 7 Mallards. The Great Blue Heron didn’t show up that day. Then I spotted a small bird working the large rocks below me in the spring and I thought it was the Yellow-rumped Warbler that I had seen a couple times there before. It turned out to be a Swamp Sparrow also somewhat rare in the county this time of year. Walking farther west I came across another spring but much smaller and filled with green watercress. There was a male Red-bellied Woodpecker down on the rocks. It seemed to be searching for food. In the male the red on the top of the head extends all the way to the base of the beak whereas in the female the red stops farther up on the head. As I walked back to the car a flock of Canada Geese flew over me. It was great birding day.

My last bird photo is of three Hooded Mergansers. I did not see them in the Arboretum but in the Yahara River down in McFarland. There were two males with their hoods (crests) up courting one female. They were circling her, throwing their heads back and swimming toward and away from her. I don’t know if she was impressed but I certainly was. I don’t know that I’ve ever seen such an active display.

My last photo is my usual ice photo. This one was taken down at Pond 2 at a time when the pond was freezing over and bubbles were caught in the ice. How do you think the layers of bubbles were formed? 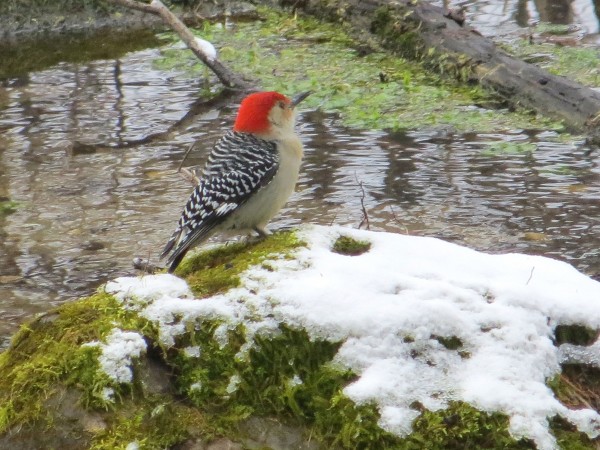 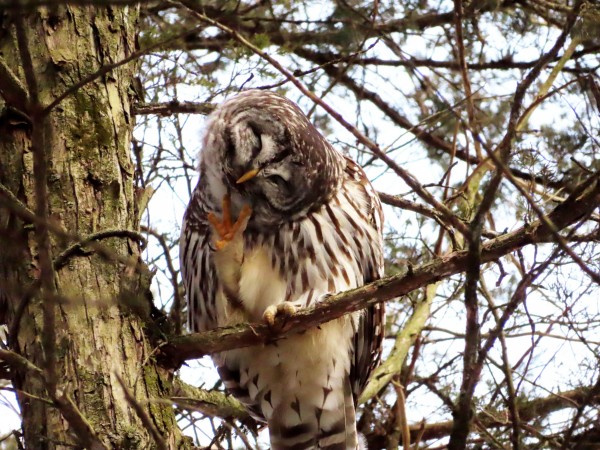 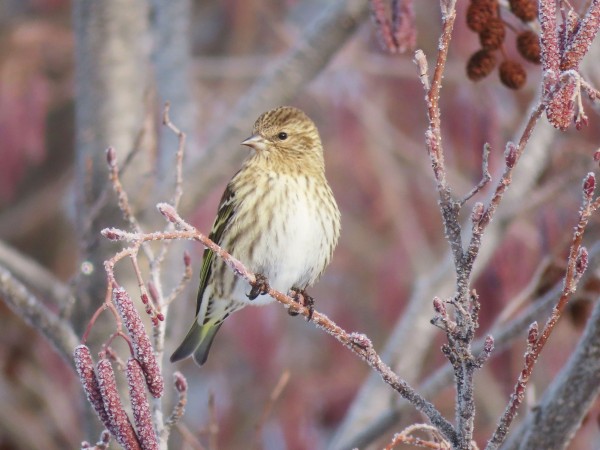 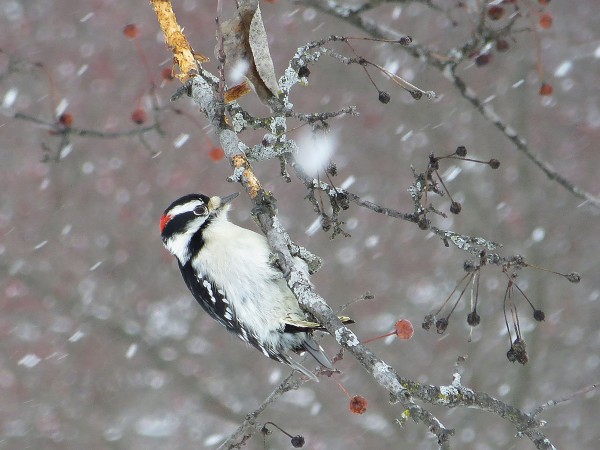 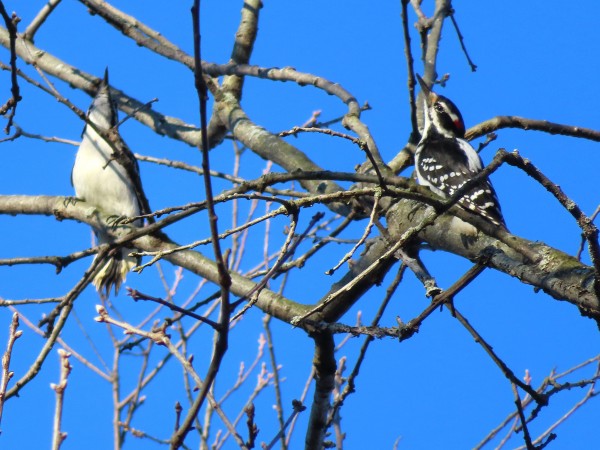 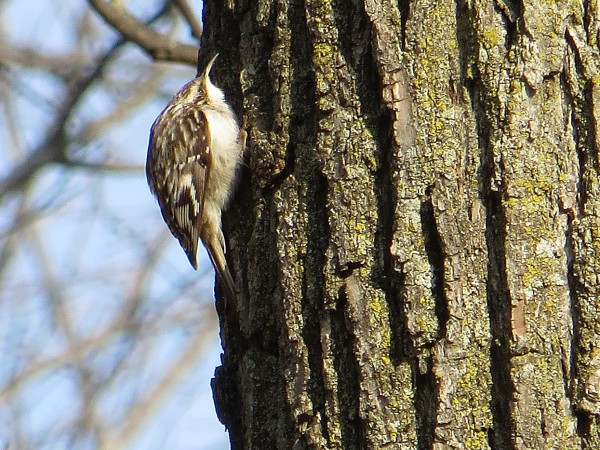 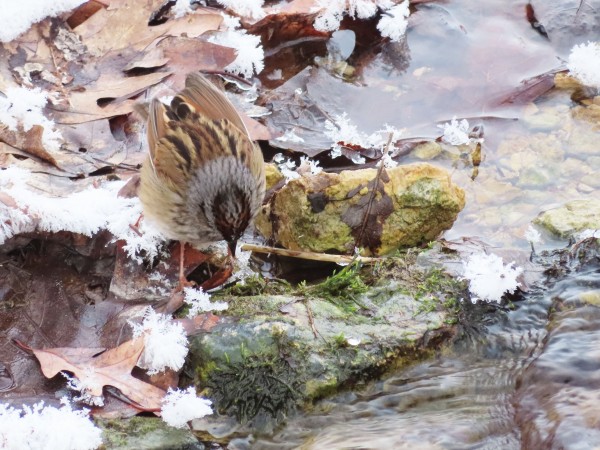 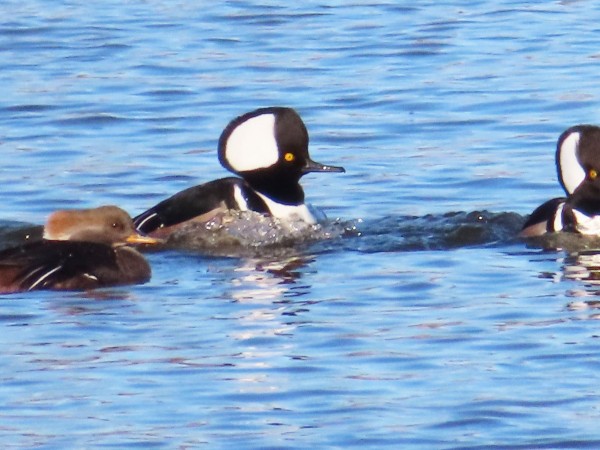 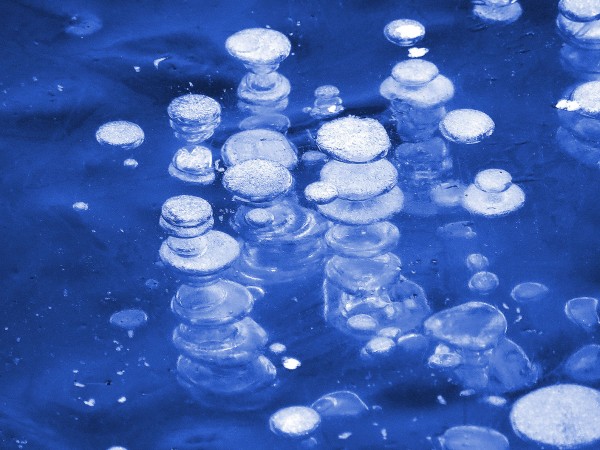