Let me first announce if you haven’t heard already that the UW Arboretum has been designated as a National Historic Landmark. This is quite an honor for the Arboretum requiring a lengthy application process and review. It recognizes that the Arboretum “represents an outstanding aspect of American history and culture.”

If you remember, Sunday was Super Bowl Sunday. Also on Sunday, as a member of the National Audubon Society, I received an email with the following title: Today is Superb Owl Sunday and You Can’t Tell Us Otherwise. By moving one letter (so clever) they created an unofficial bird holiday. Because of the really cold weather I was reluctant to go out birding Sunday morning, but after I saw that headline it inspired me to go looking for owls. I wish I could report that I found 10 different species of owls in the Arboretum but that would be a nose lengthening statement. I only found one owl species, the Barred Owl. It was not in its usual place at Juniper Knoll, but perched in a juniper along the short path to Teal Pond. I didn’t see it perched, so as I walked nearby, it flushed, flew a couple feet from my head and disappeared over the pond and into Lost City Forest. Boy did that get my heart beating! I attached a photo of an Arb Barred Owl to this message in celebration of Superb Owl Sunday.

I also attached a photo of a Great Horned Owl that I took some time ago. If I go out birding really early in the morning before sunrise I may hear the Great Horned Owls hooting in three possible places in the Arb, at Lost City Forest, in Leopold Pines or in the Grady Tract. They should be nesting about now. I learned a mnemonic a long time ago about Great Horned Owls that I think is useful. Great Horned Owls lay their eggs on Valentine’s Day (Feb. 14) and the eggs hatch on St. Patrick’s Day (Mar. 17). Of course this is just an approximation but it does tell us that Great Horned Owls nest early.

How do you like the below zero weather we are having right now and will have for several more days? Don’t you just love it when the weather persons tell us a Polar Vortex is descending upon us? It is really cold but I always tell my relatives down south that going out in this weather is all about wearing the right clothes. I’m not sure the birds like it. I seem to be seeing fewer species these days in the Arb. One of the winter birds that has been here for several weeks now is the Pine Siskin. It seems to like this cold weather and I often see them at Teal Pond or Icke Boardwalk eating the seeds of the European Alders. I really like them so I’ve attached a photo on one again this week.

Another small bird that I hear more often than I see is a White-breasted Nuthatch. They climb up and down tree trunks and also all over branches looking for food. I took a photo of the underside of one to show something that is a surprising feature of the White-breasted Nuthatch. It has a white breast but its vent near the base of the tail is surrounded by brown feathers. It’s normal. Can you see that on the attached photo?

When I visited the Big Spring today I was surprised to see the Great Blue Heron out in the middle of the outflow. Most of the time it’s standing win water off to the right or left hiding behind overhanging branches. A photo of the heron in the clear is attached.

My last three attached photos are of more large birds:  American Crows, a Cooper’s Hawk and a Red-tailed Hawk. I often see them near or not far from the Visitor Center parking lot. The crows in my imagination often come to greet me to the Arboretum. They love to perch in the small snag and caw at me. I wish I knew what they are trying to tell me. Maybe I don’t want to know. The photo of the Cooper’s Hawk was taken on one of those days when there was a lot of fog and cold weather so all the trees and bushes were covered with ice formations called rime. I often see the Red-tailed Hawk perched near the top of one of the large trees on or near Curtis Prairie where it can easily see all the numerous meadow voles below.

My last photo is of a crystalline structure whose triangles reminded me of an ice boat.

I wish you all good health and good birding too. I’m also sending warm thoughts on these super cold days, 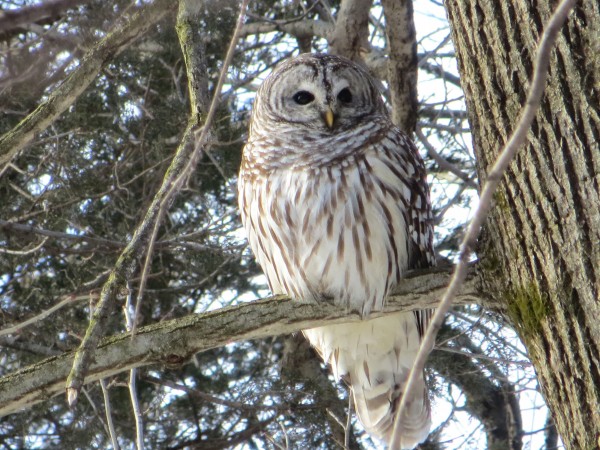 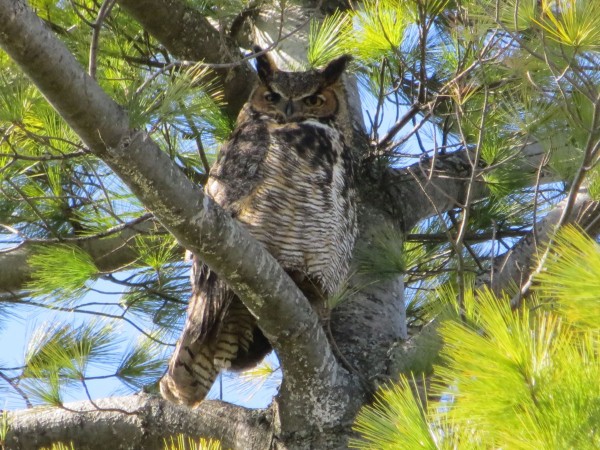 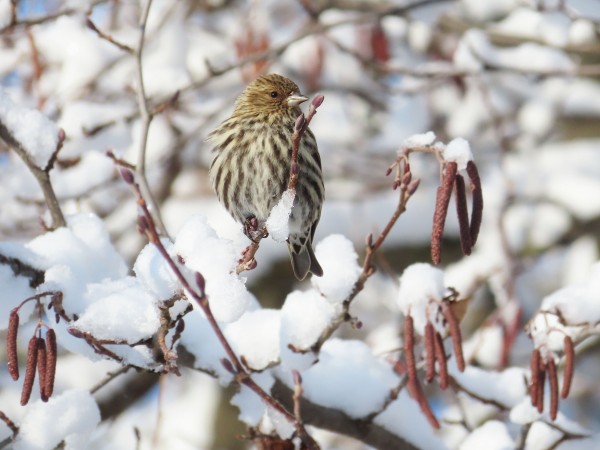 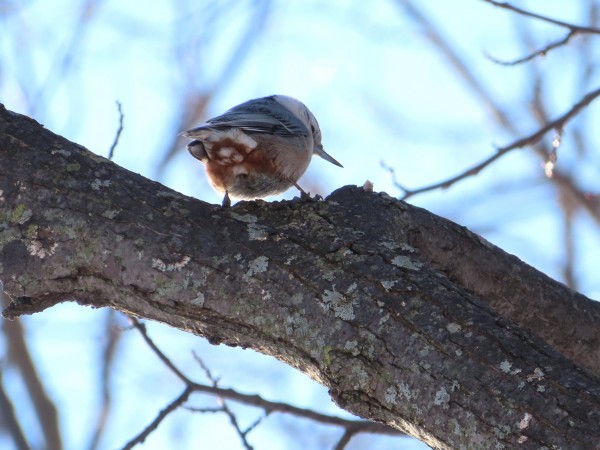 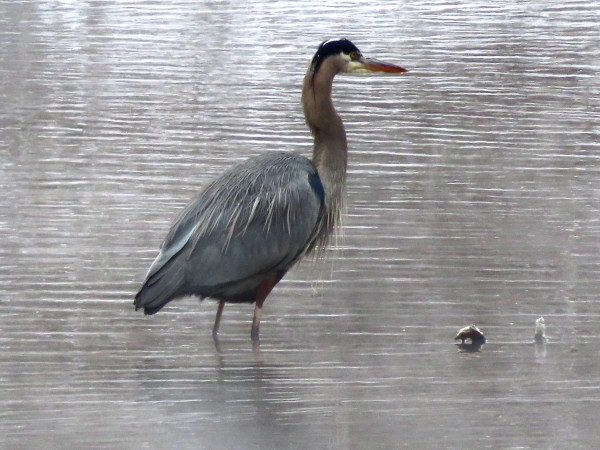 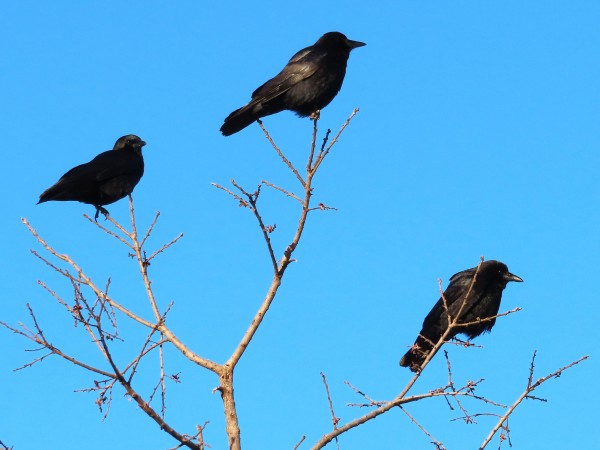 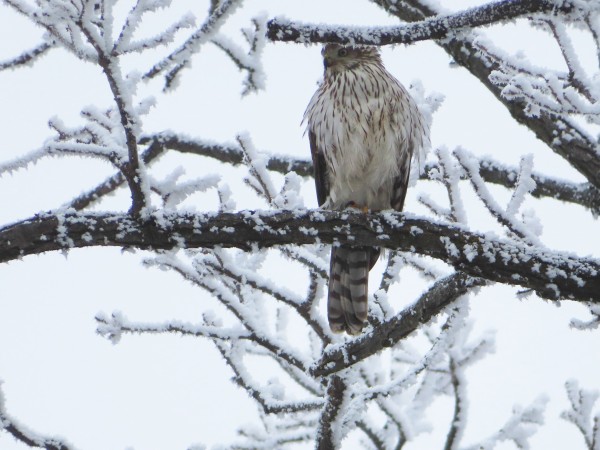 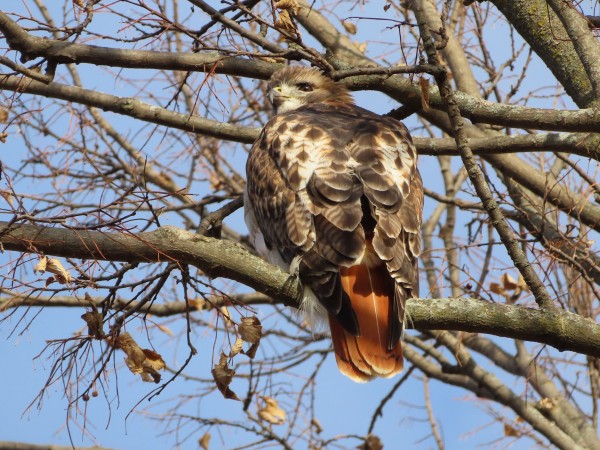 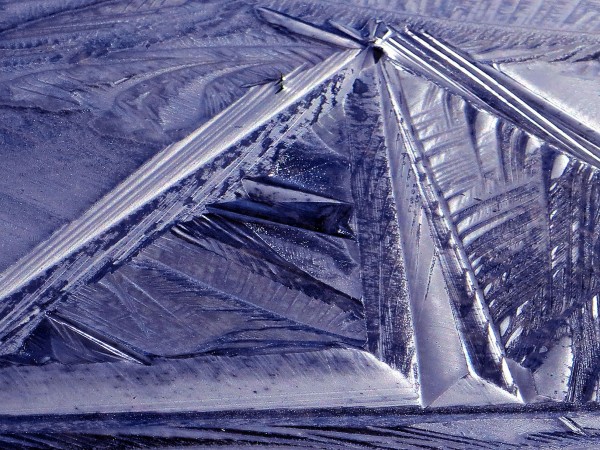