Today was quite a mix of weather. It started out with a new blanket of 3 inches of snow overnight that needed snow blowing and shoveling of the driveway and sidewalks this morning. I also had to uncover all the bird seed on the ground for the ground feeding birds. I didn’t get out birding until the afternoon. I always find afternoon birding less active than morning birding and it started that way today. The best part of this afternoon was the 36 degree temperatures. After several days of below zero temps 36 degrees was more than welcome and pleasant.

I checked the Juniper Knoll for the Barred Owl but did not find it. About 10 minutes later I got a call from one of our birders, Hiam Garner, who told me he had seen the Barred Owl on Juniper Knoll but that it was perched really high today. With that information I went back and looked high and higher and finally found it. Normally when I see the Barred Owl its eyes are closed and sleeping. Once in awhile I get a one-eyed look as if to say “Oh it’s only you Chuck” but today was different. It had caught what I think was a squirrel and it was pulling it apart and eating it. It used its talons to pin the squirrel to the branch and its beak and whole body to pull it apart. As usual it was behind a lot of branches so my photos were all partially obstructed.

The warmer weather brought a lot of American Robins out this afternoon near the water flowing under Skunk Cabbage Bridge and the outflow of the Big Spring. I counted 54 robins but there were probably more. I saw them in the water taking baths and drinking the water as well as at the edge of the water turning leaves over looking for food. They seemed to be really enjoying the day.

Yesterday, I birded both the main part of the Arb and Spring Trail Pond (aka the Duck Pond). The primary avian entertainment for the day was a Belted Kingfisher catching fish in the outflow at Big Spring. In fact there were about 10 people who gathered at the railing to watch the kingfisher perform. It initially came flying in announcing its presence with its rattling call. It perched on a branch overhanging the water. It then studied the water below for fish activity. Seeing a fish it would immediately dive into the water, grab the fish, fly to the opposite side of the outflow, perch on a branch and swallow the fish. This continued for several minutes with fish consumption at about 6 or 7 fish. I don’t think it ever came back from a dive empty-beaked. I never got a photo of this kingfisher but I attached a photo of one from a former time at Big Spring.

The Great Blue Heron was at Big Spring too standing in the outflow water behind some branches overhanging the water. Paul Banas told me had seen two that day, one in the water and another who had flown over. I think two have usually stayed all winter each year for several years.

As I walked along Arboretum Drive up from Skunk Cabbage Bridge I came across a pair of Northern Flicker. They were perched in a tree near one of the houses. They seemed to be interacting with one another. They may be migrants who have just come back to the Arb. They normally go south for the winter. Interestingly their feathers looked bright and crisp as if they were new. Unfortunately I did not get a photo.

At Spring Trail Pond I found the usual assortment of birds. The most colorful were the 17 Northern Cardinals that were feeding on some seeds dropped by visitors. Other favorites of mine are the White-throated Sparrows, American Tree Sparrows and Fox Sparrows. I did see a couple of European Starlings that are now speckled with white and show some iridescent colors besides black. The number of Mallards varies between 100 and 160 depending how many have flown across the street, walked up the sidewalk and turned right into the backyard of a homeowner who lays out corn for them.

I’ve attached two photos that were taken in Dane County but not in the Arboretum. One is of a Yellow-bellied Sapsucker which normally flies south but one or two stick around Madison. The attached photo is of a male with red feathers on the crown and throat. New feathers appear to be coming in. I did see that the sapsucker displays a light yellow wash on its belly. I also saw that a couple holes made by the sapsucker were actually oozing sap.

The other photo is one of an Eastern Screech Owl with its head peeking out of the entrance/exit hole of a nest box. This is a small owl with short ear tufts and comes in two flavors, a red (reddish brown) morph and a gray morph. This one is the red morph. Several years ago there was a gray morph Screech Owl who would spend the day in a hole in a tree near the Mills Street entrance to the Arb. Its gray plumage looked just like the bark of the tree so it was perfectly camouflaged. 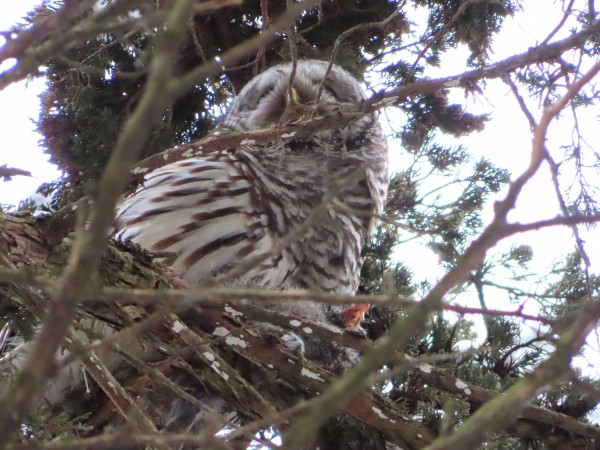 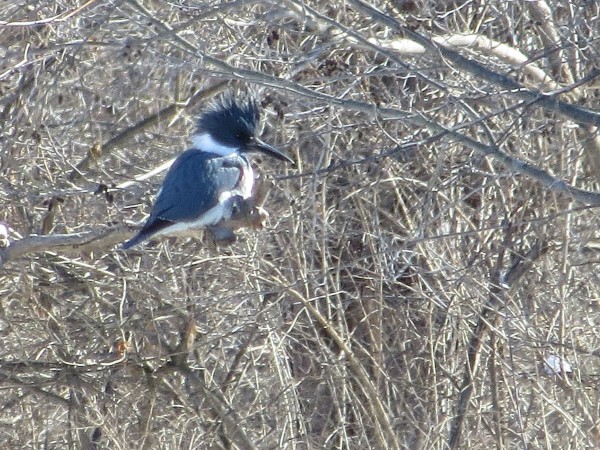 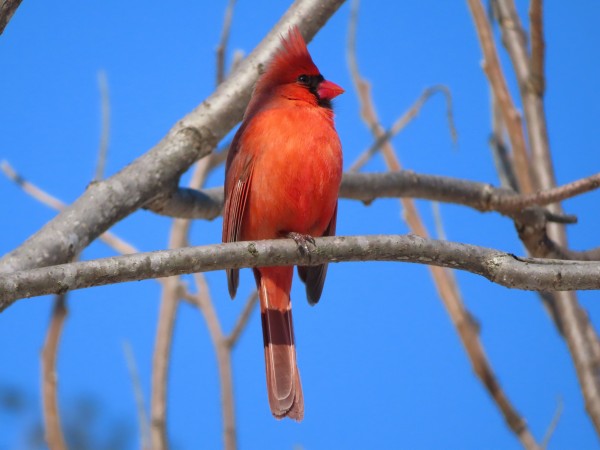 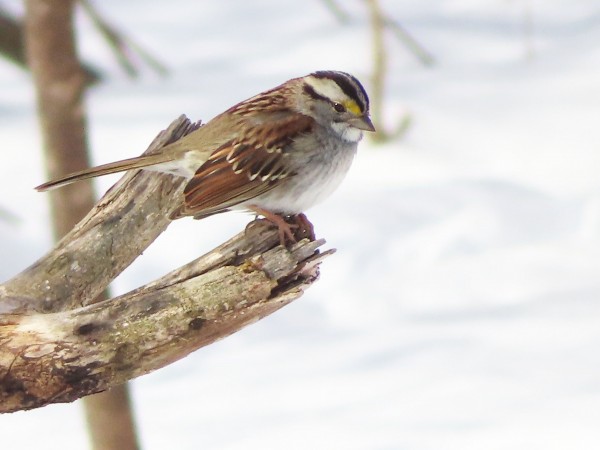 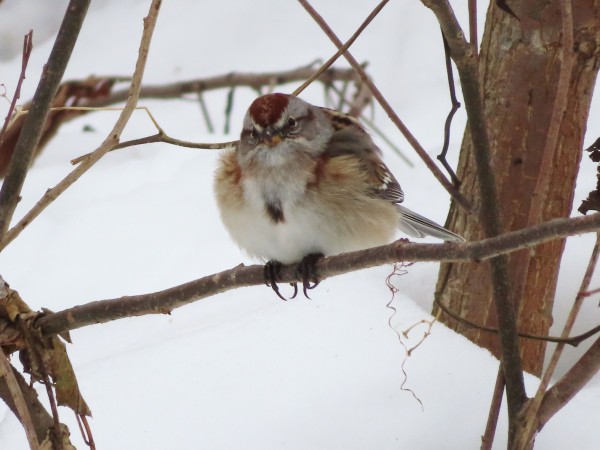 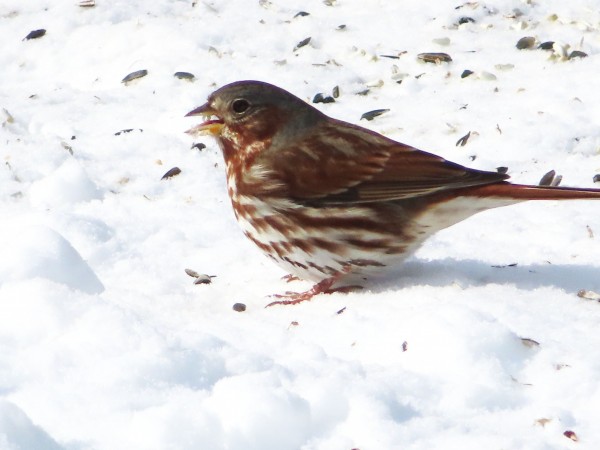 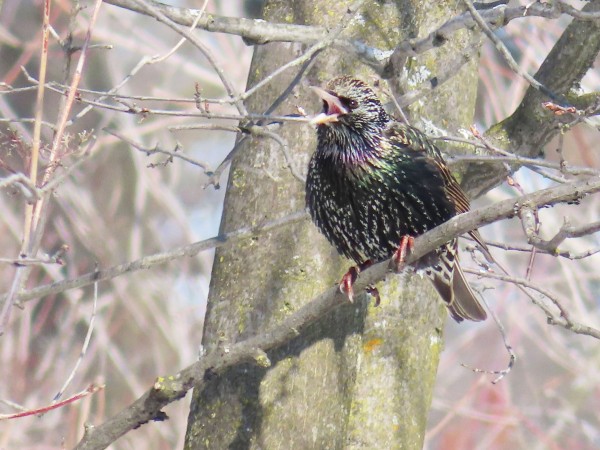 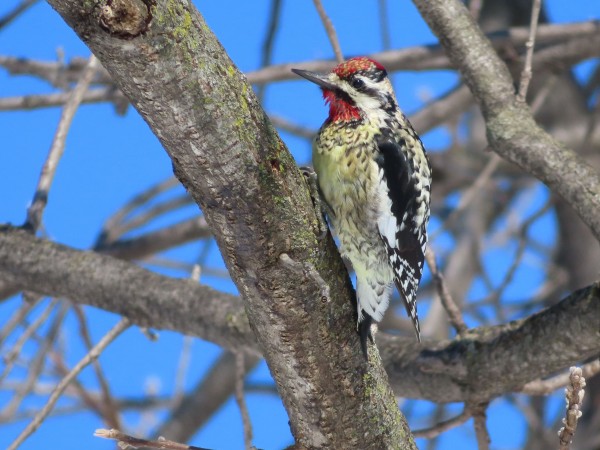 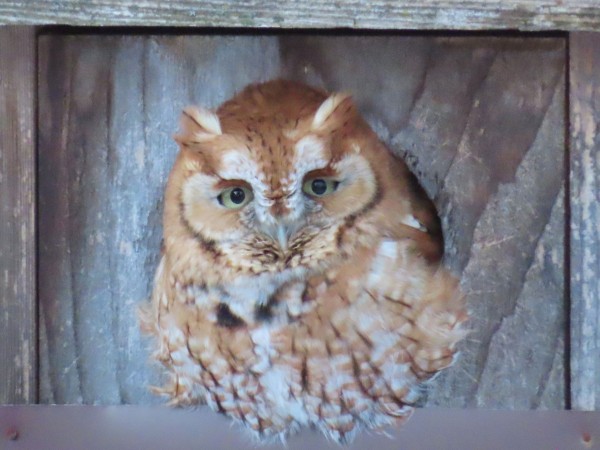