On my walk this morning in the main part of the Arboretum and at the southern part of Gardner Marsh I picked up two new species for the year, often referred to as “First of Year” species or abbreviated as FOY species. I saw both of them on Longenecker Gardens. They were a single Tree Swallow which flew over me and two Golden-crowned Kinglets which were searching for food in one of the specimen trees. Neither of the two species stopped long enough for a photo but I did include a photo of each from the past.

I also came across two Fox Sparrows whose numbers have increased in the past couple days. Both were singing their beautiful songs. If you’ve never heard their song, Google it and listen to it. It’s really very melodious.

While in Longenecker Gardens I looked at the Red-tailed Hawk’s nest in the White Pine stand northeast of the Visitor Center. The Red-tailed Hawks have repaired the nest that was used for several years and last used two years ago. They added new sticks. For the past few days I’ve checked the nest almost daily but could never see a hawk in the nest. This morning one was there. At first I could only see its head but as I continued to watch it stood up and moved around seemingly rearranging the furniture. There may be eggs or even young but I don’t know. Take a look for yourself the next time you’re there.

Next I walked through Lost City Forest to get to Carver St. and the southern end of Gardner Marsh (and Harvey Schmidt Park)  As I looked at the waterfowl on the pond I saw four Tree Swallow flying back and forth over the pond catching insects. I saw some small flying insects myself but refrained from eating them. I was most interested in looking at the heron rookery. When I searched the 12 or so nests remaining from last year I saw four nests with a pair of Great Blue Herons in each for a total of eight Great Blue Herons. More adults should be arriving soon. I wonder how many young will be produced in the rookery this year.

Yesterday when I birded the Arboretum I first walked west along Curtis Prairie. All of a sudden I heard a loud cry from a bird that was fast approaching me from above. As I got a closer look it turned out to be an immature Bald Eagle whose plumage is very different from the adult. The plumage of this eagle was dark brown with many patches of white here and there. It was an impressive flyer and I was lucky enough to get an action photo before it flew away. That is one big and impressive bird. Not long thereafter I saw an adult with a dark brown body but with a white head and a white tail perched in a tree on the north side of Curtis Prairie. Bald Eagles do not fly over the Arb very often.

As I walked to the east and around Pond 2 I noticed a couple small sleeping ducks with their heads partially tucked under their wings. Sleeping ducks always seem to have one eye open for approaching danger. When they saw me, danger personified, they perked right up and watched me closely. I did get a photo of one of the ducks, a Ring-necked Duck. Note the rings on the bill. I think it should be called a Ring-billed Duck but they never asked me.

Some birds are beginning to build nests already. I’ve been watching a pair of American Crows building a nest in one of the tall White Pines in the pinetum along Arboretum Drive. I did catch a photo of one of the crows carrying a stick to the nest.

My last photo is of a Merlin I saw in Dane County but not in the Arb. I saw it at Nine Springs perched only 15 feet on a branch overhanging the trail. I approached the Merlin very slowly.  The wind was really blowing so it was more worried about hanging on to its perch than it was about me. I was able to get pretty close for the photo. That’s not my usual experience. I was also able to point it out to three other birders who came along. They really loved the Merlin.

That’s the bird report for this week. Get out and find more spring arriving birds. It’s so much fun and satisfying. 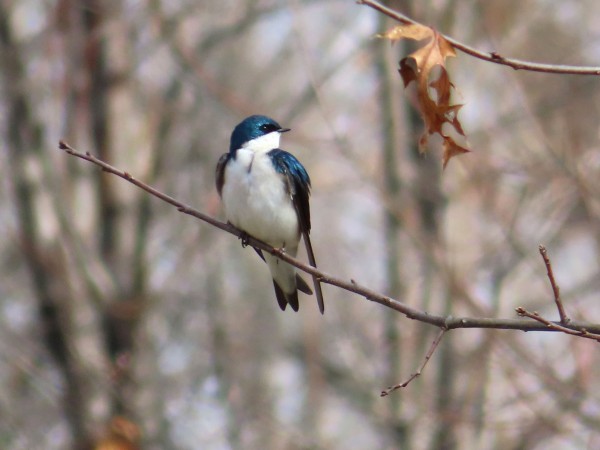 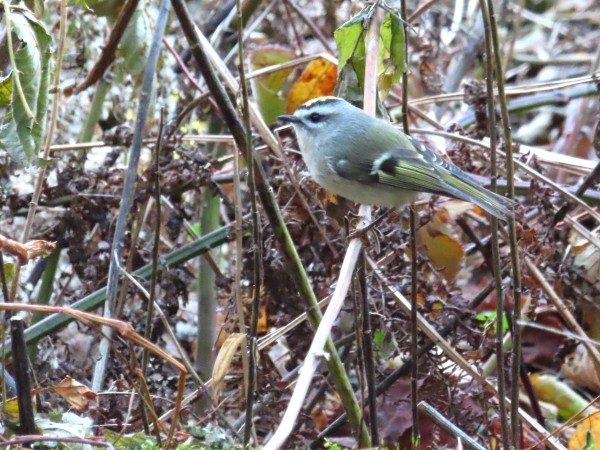 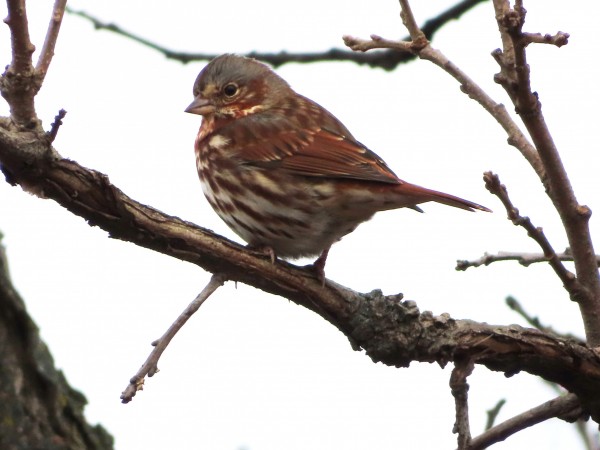 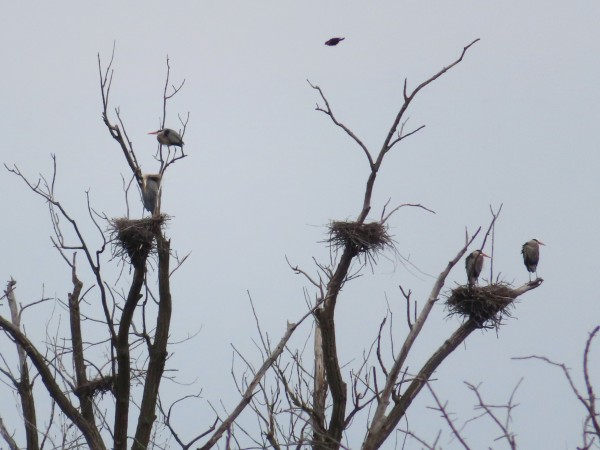 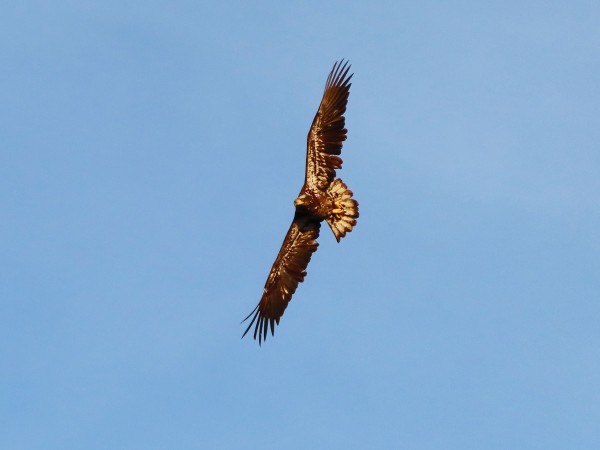 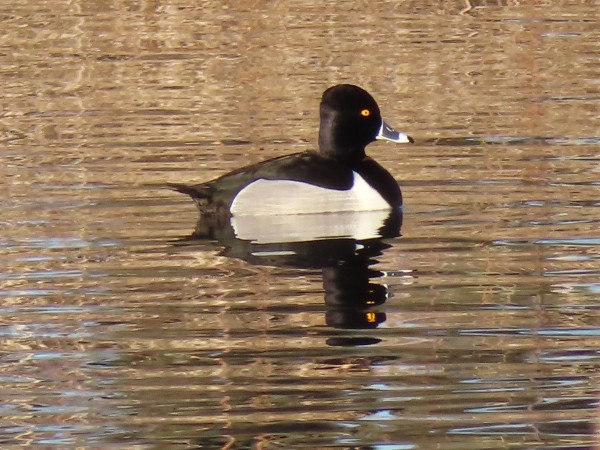 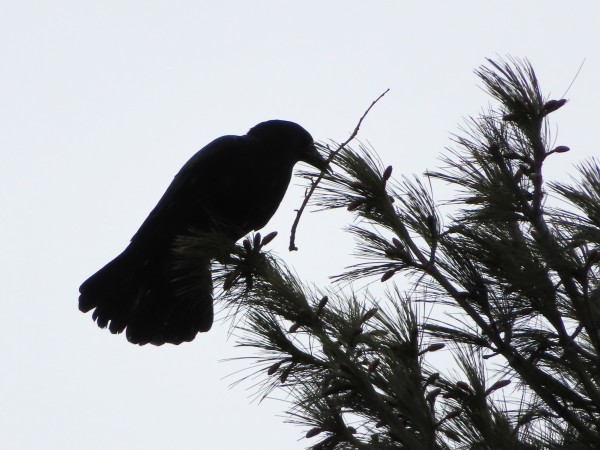 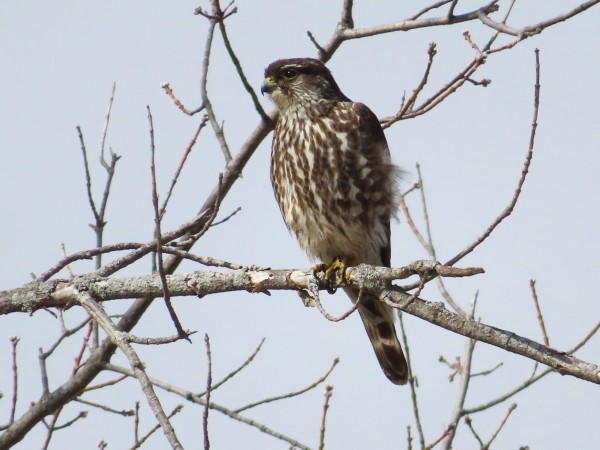