The recent weather has been all over the map. I guess that’s just the way March is. Saturday while out birding, I got rained on. It was a good test of my rain gear. Sunday the fierce winds were out of the northwest and it was cold. Today the winds increased all morning with gusts up to 40 mph but this time out of the south. Whiplash comes to mind.  At least with the winds from the south more migrating birds could be arriving. The radar showing bird migration and called Birdcast did show large numbers of birds heading north over the central US. I didn’t see anything new on my walk today but maybe tomorrow.

During my bird walk this morning I did have two interesting sightings. First the Red-tailed Hawks were in and around their nest in the white pine trees just northeast of the Visitor Center. At about 9:00am I saw both of the adults flying around the pines so I went over there and as I looked at the nest one of the adults flew away while the other perched on the rim of the nest with its back to me. After a moment it settled down into the nest as if to sit on eggs. Once down I could only see the tip of its tail. I look forward to seeing small heads of the one to three young peaking above the rim of the nest and the adults bringing food and feeding it to them.

My second sighting, not far from the white pines and on Longenecker Gardens, was a pair of Eastern Bluebirds. This is probably the same pair I saw last Tuesday. They were very near nest box #8 so could build a nest in that box or in any one of the 15 bluebird nest boxes in the Arboretum. What surprises me is that I haven’t seen any more bluebirds in the Arb other than that pair.  I have attached a photo of a pair of Eastern Bluebirds that I took over at the Lakeshore Nature Preserve. They look the same as those in the Arb but they posed side by side for a photo whereas the ones in the Arb refused. The blue of the male is so striking. Note how large the female is. My guess is that she may be laying eggs soon.

There have been more Brown-headed Cowbirds appearing in the Arb this past week. Most of the body is black but the head and neck are brown. Note how thick the bill is at its base. This is unlike that of the Red-winged Blackbird. Also note the cowbird with its wings spread out. This is really a part of courtship behavior when the male spreads its wings and bows before the female almost falling off its perch. Why males practice this behavior in front of other males is curious. By the way female cowbirds are all in gray plumage.

Yesterday I saw a Tree Swallow by the pump house and also by nest box #1. Tree Swallows always nest in nest box #1 so this was claiming the nest box for itself and its mate. Curiously I saw one Tree Swallow on March 22nd and now this one yesterday but no others in the main part of the Arb.

Another section of the Arb is Gardner Marsh. I’m especially interested in watching the Heron Rookery as the Great Blue Herons begin to populate the 12-15 nests in the rookery. I’ve counted the number of herons on and around the nest on each of my visits. Last Friday, March 26th, there were 10 Great Blue Herons in pairs around 5 nests. Since then the winds have been so bad that there were fewer at the nests.

In the water at the south end of Gardner Marsh I’ve seen several interesting waterfowl. To see this body of water and its waterfowl drive down Carver St. and park at one of the small parking lots. One of my most favorites is the small Bufflehead. The males have been really showing off for the females.  They fly toward the females and then sort of waterski, using their feet, right up to the females. They also bob their heads up and down and even make some rarely heard sounds.  his is all part of their courtship behavior. The black of the head is iridescent with colors of purple and green reflecting back.  The female is mainly black with a characteristic white spot on its face.

Another favorite in this area is the Wood Duck. They breed in the area so look for many parents and young on the water later in spring. The males are spectacularly colorful. The females are sexy in their own way with a white eyering and white eyeline, racing stripe, extending back from the ring.

There was an Eastern Phoebe catching insect around the expanded pond at the western end of Carver St. It has a dark gray head and upper body and tail but has a light yellowish white underside. Its most distinctive feature is that it bobs it tail up and down.

Have you noticed that the male American Goldfinches are beginning to molt into their bright yellow breeding plumage? The attached photo shows a male in plumage transition with some bright yellow feathers of spring and some subdued olive feathers left from winter.

Soon the winter birds visiting from way up north will leave to return to their breeding grounds. Some like the Dark-eyed Juncos, American Tree Sparrows, Pine Siskins and Common Redpolls are still here but I think the Crossbills have left.

That’s the Arb bird report for this past week. 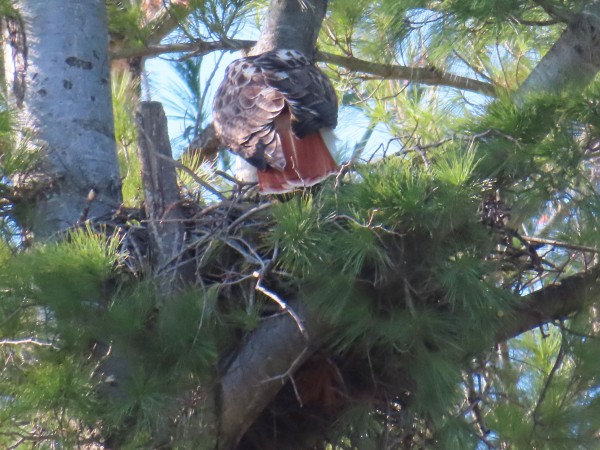 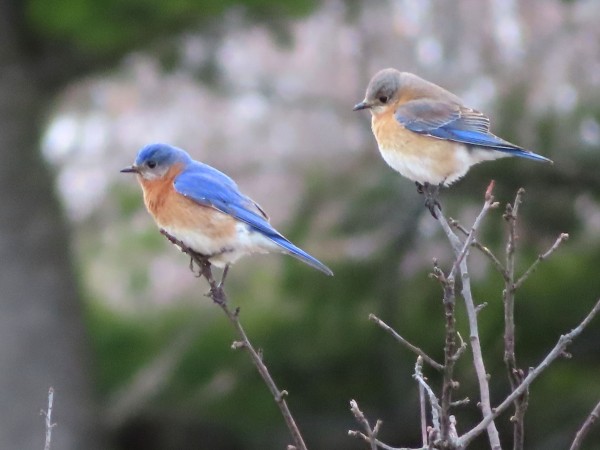 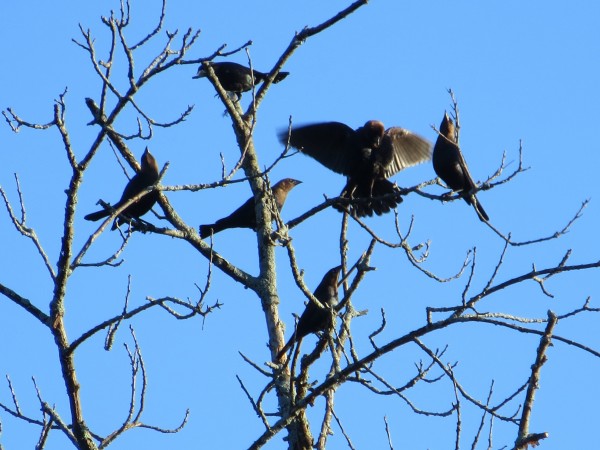 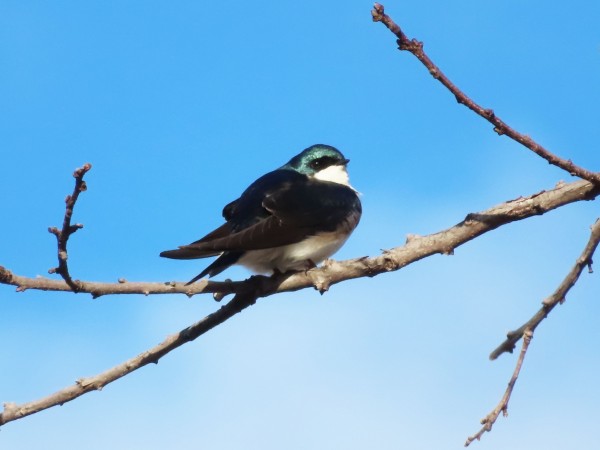 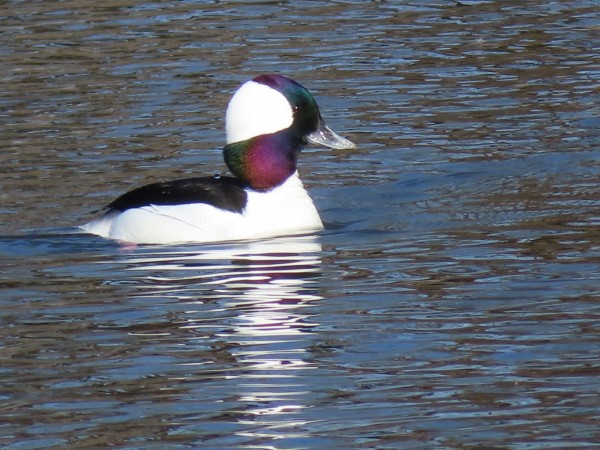 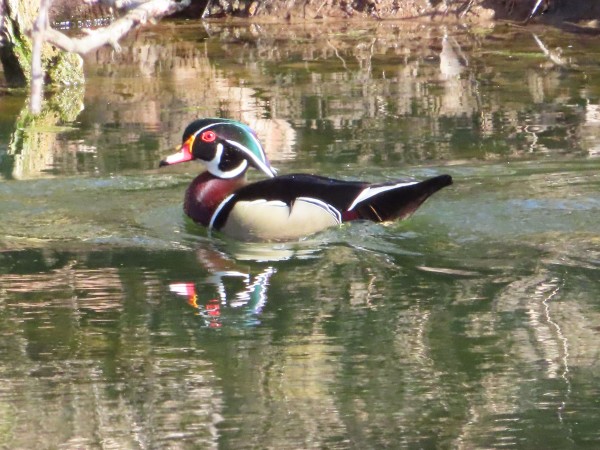 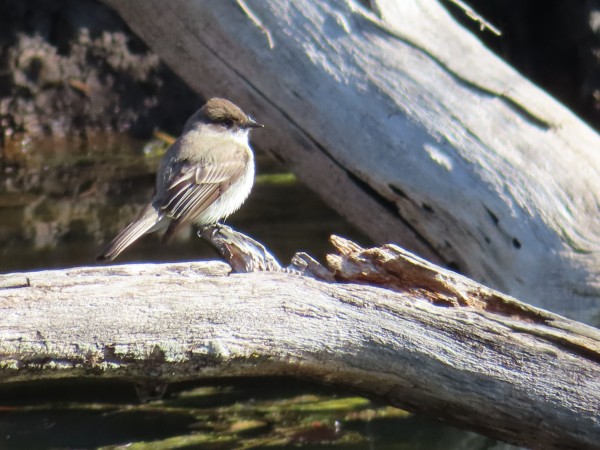 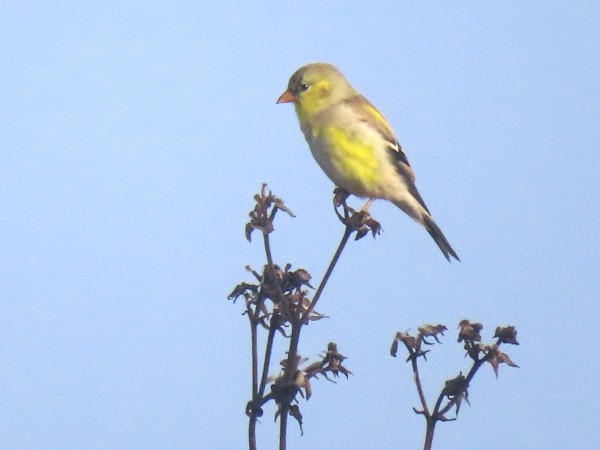