It was nice to get the needed rain but it was also nice to see the sun today. The weatherman said colder temps are coming and something about possible flurries tomorrow night. What! It can’t be. We are in spring and birds are migrating. We cannot welcome them with flurries. I hope the weatherman is wrong.

So what is happening with the birds in the Arboretum?

All this week I’ve been seeing Wood Ducks either perched in trees or flying through the woods. It seems so unusual to see ducks in trees but Wood Ducks actually nest in enlarged tree cavities made by woodpeckers, lay their eggs and have their young in these nest cavities. I always wonder how the young, not old enough to fly, can survive the fall when they jump out of their nest cavity and land on the ground. I hope there’s enough leaf litter on the ground to cushion their landing. Search YouTube videos for the young Wood Duck ducklings jumping out of nest cavities and bouncing on the leaves as they land. I’ve included a photo of a male Wood Duck perched in a tree. The male Wood Duck is one of the most beautiful and colorful birds I know. I’ve also pasted a photo of the head of a female Wood Duck in the bottom right corner. She is generally pretty drab but I think the white ring around the eye with a white racing stripe extending backward from the eye ring is really quite alluring. It’s the best part of her whole plumage.

I’ve been paying close attention to the Eastern Bluebirds and what nest boxes they choose to set up housekeeping in. There are still very few Eastern Bluebirds in the Arb. It seems unusual to me this year. I hope more arrive soon or the Tree Swallows will have taken over most of the 15 next boxes in the Arb. This past week I witnessed TWO 5-second copulations in Eastern Bluebirds. What are the chances of seeing one 5-second event let alone seeing two? I’ve also seen a pair carrying nest materials to a box.

The Wild Turkeys have been very active in their courtship behaviors. I’m not sure that females have any courtship behaviors other than ignoring the males. Longenecker Gardens seems to be the site for this activity. The boys are doing their best to attract the females. Their tails are fanned, their wings are dragging on the ground, their faces and necks are painted in reds and blues and their general plumage is all fluffed up. Ladies, what’s not to like?

Another species that has a unique approach to courtship behavior is the Brown-headed Cowbird.  I’ve included a photo of a male cowbird with a brown head and black body bowing before a female whose plumage is all gray. Usually the male spreads its wings at the same time. Another male looks on in wonderment.

I hope all of you have visited Curtis Prairie just after sundown to hear and see the American Woodcocks. In addition you may hear the winnowing of the Wilson’s Snipe. The Wilson’s Snipe has a unique shape and plumage. Note especially its long beak used to probe for food. They are not seen very often but hearing them is more likely.

Today on my walk on Longenecker Gardens I spotted a leucistic American Robin. It had white patches in its plumage. It results from partial loss of pigmentation in its feathers here and there. It is different that albinism in that in the latter there is complete loss of melanin and pigmentation.

My last bird photo is of a rare bird seen in Dane County this past week. It is a Cinnamon Teal. It is primarily a western bird.  As its name implies the body of the duck is cinnamon in color. When I saw it late in the afternoon it was hanging out with several Blue-winged Teal. It was really focused on eating with its head half submerged picking up food near the surface. It hardly ever lifted its head.

The Magnolias are blooming in Longenecker Gardens so I thought a photo of a pink variety would be appropriate for today.

That’s the bird report for the past week. Many more migratory birds are coming. I hope you are all out birding on your own. Bird migration just can’t be missed. 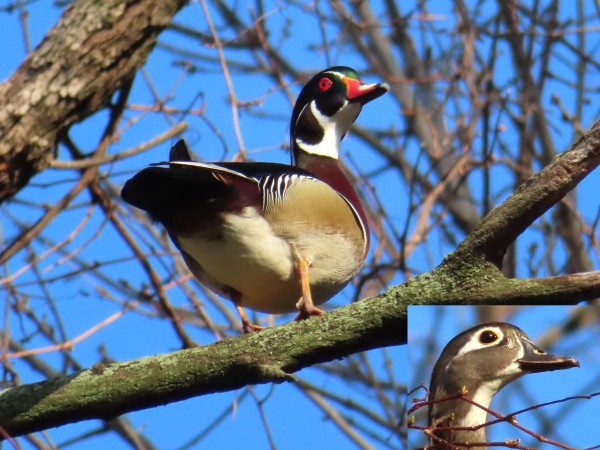 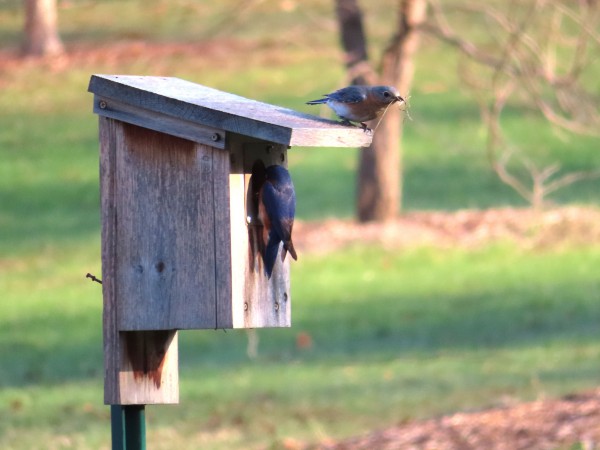 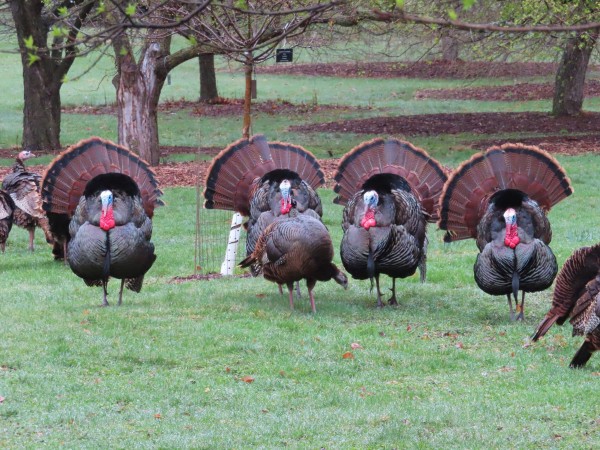 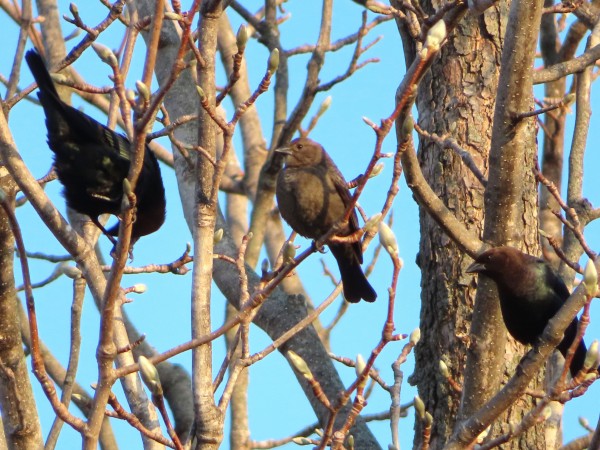 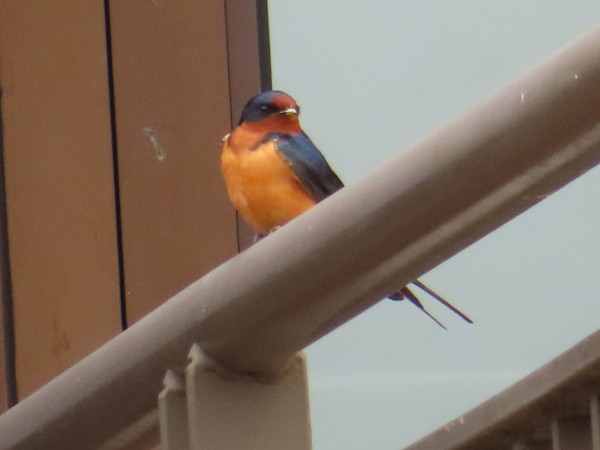 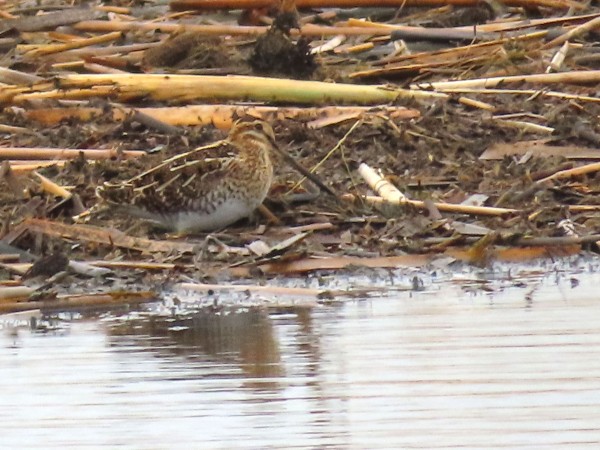 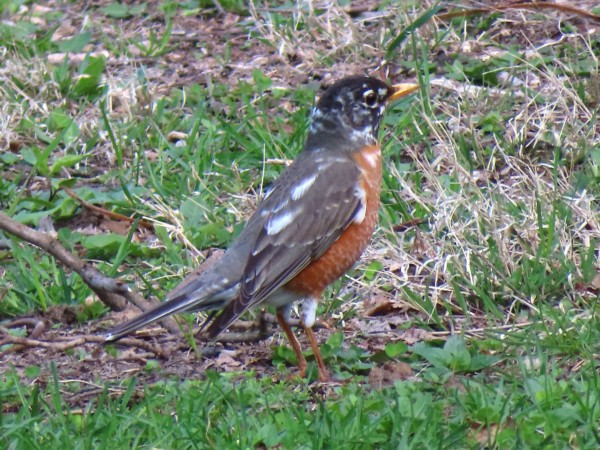 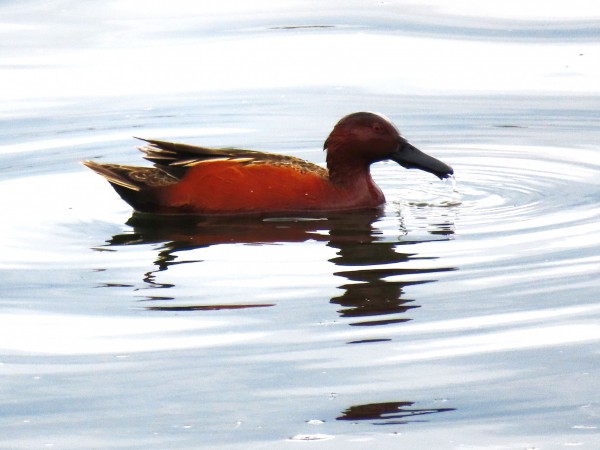 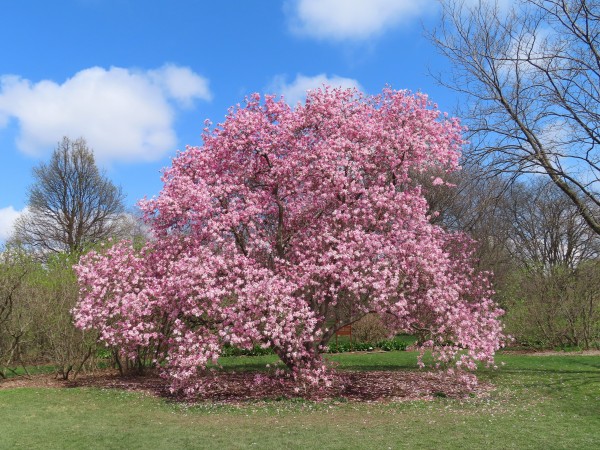