The number of sparrows has been increasing in the last week. Song Sparrows are the most numerous. There are a couple Swamp Sparrows. Field Sparrows are beginning to be seen. There are still a few American Tree Sparrows but their number should be diminishing since they are winter birds and someday soon, I hope, winter should be over and they will all have returned to the far north. The one that I particularly like is the little Chipping Sparrow. It’s cap is rusty red, just below that is a white eyebrow and below that is a distinct black eye line. It has a clean white breast and belly. It is most often found in the Pinetum where it often nests. A photo of a Chipping Sparrow perched in a pine tree is included.

Last Tuesday our group saw a Hermit Thrush just as we walked into Wingra Woods from the adjacent parking lot. I saw another one today in Gallistel Woods. They are brown above with white breasts and bellies. The breasts are dotted by dark spots. The eyes have narrow, white rings around them. The tail is rust colored. It has a unique and distinctive behavior characterized by raising its tail on occasion. It is not an up and down bobbing movement like an Eastern Phoebe or a Palm Warbler. It just raises its tail and a little later slowly lowers it again. A photo of a Hermit Thrush is included.

Last week I described how the Male Turkeys are really displaying their feathers to try to impress the females. They spread their tail feathers into a broad fan. They lower their wings so they drag on the ground. They puff up their body feathers to make themselves look big and manly. Their heads are mostly changed to blue with the caruncles on their necks a bright red. The overgrown appendage originating from above the beak and hanging down the front or side of the beak, called a snood, is especially long in older, more senior males. For all the showmanship that the males provide, the funniest part is that females seldom pay attention. Included is a photo of three males trying to impress a female.

I saw three Yellow-rumped Warblers today. One was at the Big Spring quite far out on the side of the outflow. Another was at Spring Trail Pond working the big rocks on the south side of the pond. I’ve seen one in that same place three different times. The third was on the edge of the east pond at the southern end of Gardner Marsh. All three were outfitted in bright black, white and yellow feathers.  They were all good looking males. A couple other species of warblers have been seen in Dane County but the numbers are still very low.

The number of Ruby-crowned Kinglets has increased recently making them a bit more common than the Golden-crowned Kinglets. I saw one in three different locations today. All three showed a bit of their ruby crowns. Sometimes the crown is completely covered so it can’t be seen. Other times, especially when two males are in the same territory the crowns can really be protruded. A photo of a Ruby-crowned Kinglet is included.

From Teal Pond I walked to Pond 2. There were Blue-winged Teal there too. A more frequent visitor these last few days has been several pairs of Bufflehead. The male is very showy with its white and black head as well as its white and black body. The female is much more subtle with a white spot on its head and otherwise mostly gray/black.  A photo showing the female and male is included.

Today I saw my first of year (FOY) Northern Rough-winged Swallows. At Spring Trail Pond six of them were flying low over the water and sometimes dipping their beaks in the water to pick up some food. They are mostly light brown with relatively small heads. I saw more of them at the east pond at the south end of Gardner Marsh. In fact they were mixed in with a few Tree Swallows and Barn Swallows. A photo of three Northern Rough-winged Swallows perched on a branch is included.

When I birded the south end of Gardner Marsh I checked the Great Blue Heron Rookery too. There are only two nests this year. Two years ago there were 12 nests and last year there were 6 nests. I’m not sure what has happened to all the nests but I do know that rookeries degrade over time so it’s not surprising. Today I saw one heron on a nest and two perched on branches nearby. It will be interesting to see if they build more nests or abandon the rookery completely. A photo of a perched Great Blue Heron is included.

I wish all of you good health and good spring birding too, 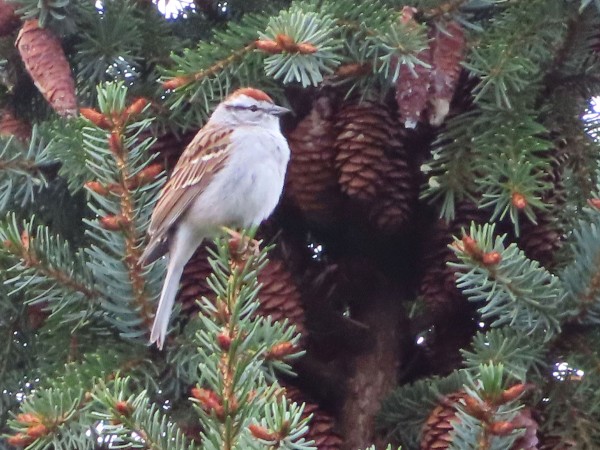 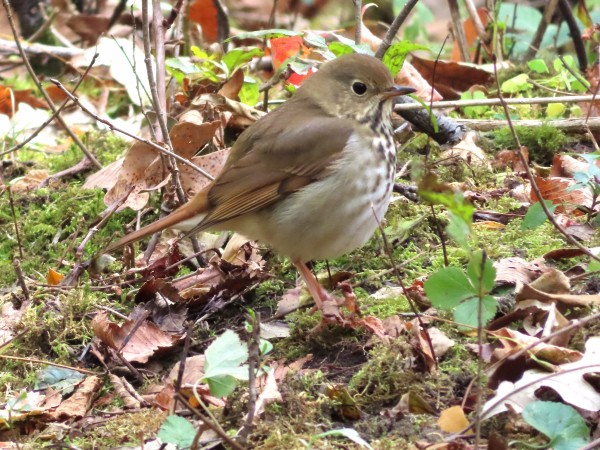 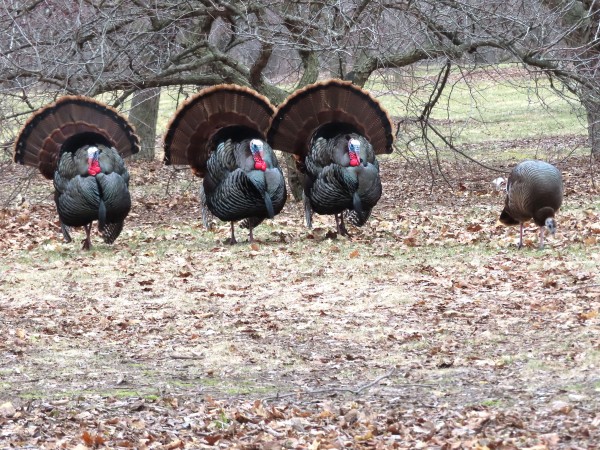 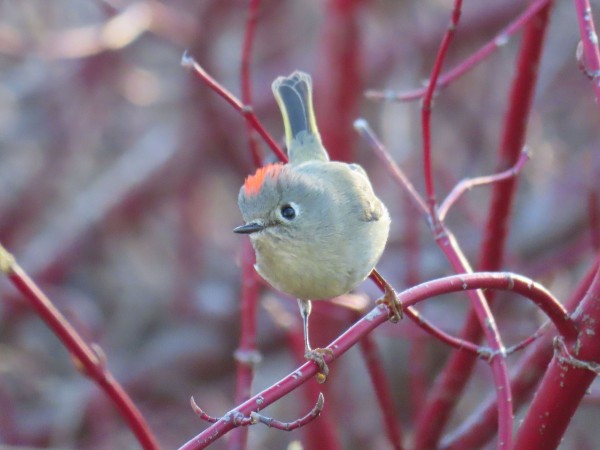 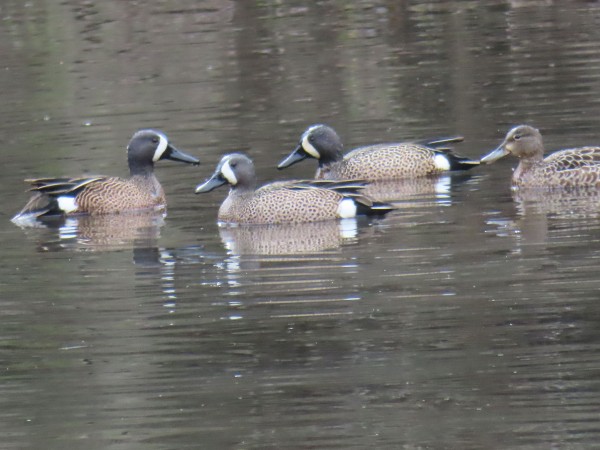 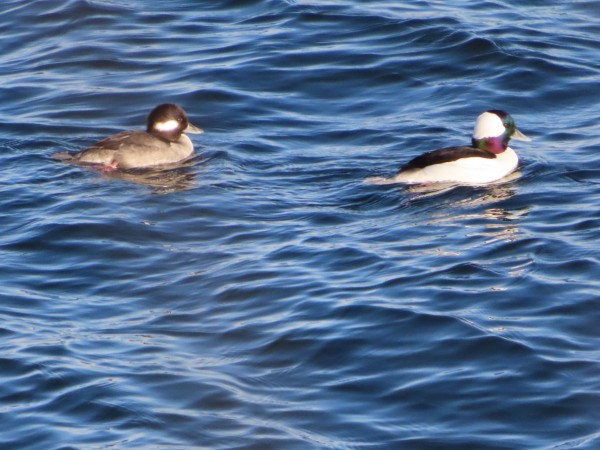 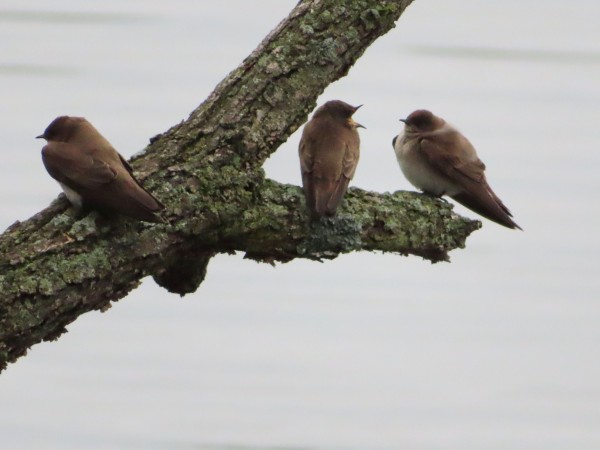 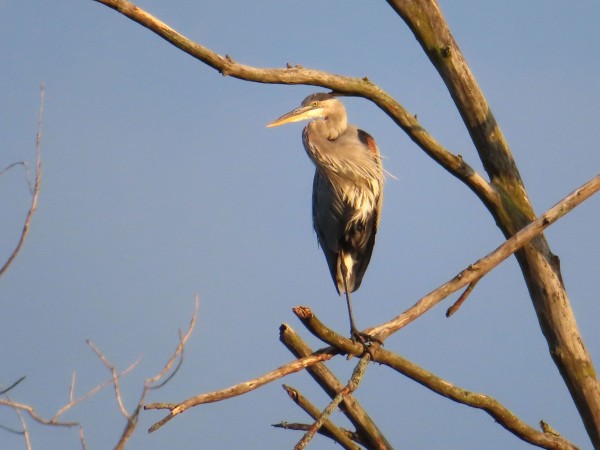 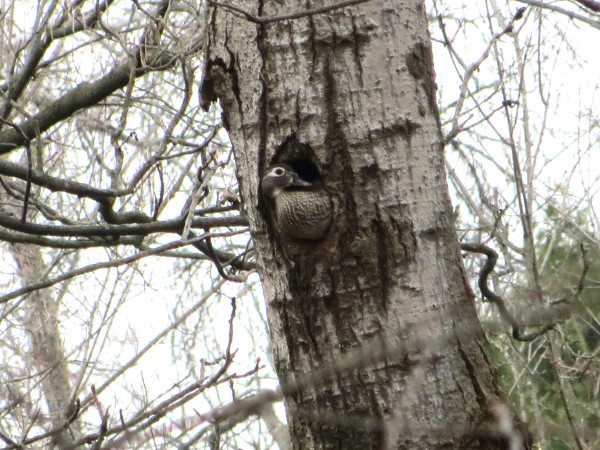 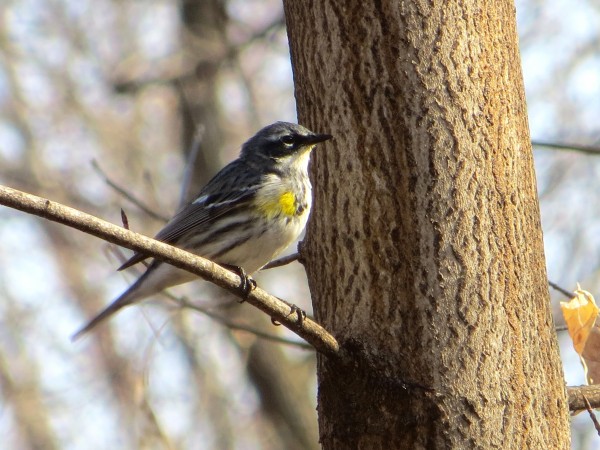