What is happening in the bird world these days?

Migration of birds continues to bring new species to the Arb and Dane County in general. Many birders are seeing between 20 and 30 species of warblers in spectacularly colorful plumages. Besides warblers many other bird groups are arriving too. Vireos such as Warbling Vireos, Red-eyed Vireos, Yellow-throated Vireos and Blue-headed Vireos are being heard and seen. In HoNeeUm I’m hearing and seeing the Baltimore Orioles in all their orange and black glory as well as the Rose-breasted Grosbeaks in their black and white base colors with a great accent of a bright red bib. The main swallows in the Arb are Tree, Barn and Northern Rough-winged. The Tree Swallows occupy some of the bluebird houses while the Barn Swallows are building nests under the eaves of the Visitor Center. These are just a few of the newbies.

The past two weeks one or two Brown Thrasher have been perching at the tops of trees and singing constantly just north of the Visitor Center. I hope they nest in the lilac like they did last year.

I’m seeing many of the warblers that will stay in the Arb and nest here. They are the Common Yellowthroat , the Yellow Warbler and the American Redstart. They seem to be singing and chasing a lot.  Tis the season.

Another event that is catching my attention is birds carrying nest material. For example many birds are carrying grass to build nests. I saw a Barn Swallow pick up grass and mud at the edge of Pond 2 for their nests. I’ve seen many female Red-winged Blackbirds carrying grass for their nests. I saw a Baltimore Oriole weaving its nest material into a hanging basket type of nest in a cottonwood tree.

Last week I mentioned that I saw two young colts with their parent Sandhill Cranes. I’m worried about the survival of the colts since I haven’t seen them in the last few days. However I have seen one white-headed nestling in the Red-tailed Hawk nest. That youngster will be a real treat to watch grow.

I’ve spotted several male Ruby-throated Hummingbirds perched at the top of 20-30 foot snags surveying their territory. Their throats are usually black but when the sun shines just right the black turns to red or ruby colored. They are really fast fliers.

I did see an Ovenbird the other day. It looks a bit like a thrush but the orange cap bounded by black stripes identifies it as the Ovenbird.

I saved the best for the last. For the past two days I’ve seen male Scarlet Tanagers. The brilliant red body with black wings and tail are truly striking. Their song does not match the beauty of their plumage. The song is often described as similar to that of a American Robin but with a sore throat. It’s a bit gravelly.

One more bird I saw about a mile south of the Arb at the Sub-zero pond. It is a shorebird not often seen in Dane County. It is an American Avocet. It has long legs and a long, upcurved beak. It’s feeding behavior is interesting too.

My last photo is the answer to the question I posed with an interesting non-bird photo. An enlargement is included. It is the wood grain of a telephone or power line pole. I’ve never seen a pole that shows all that wood grain. I thought the overall image looked like an owl and the dark spot in the center looked like a face. You may have had other ideas.

That’s the bird report for this week. 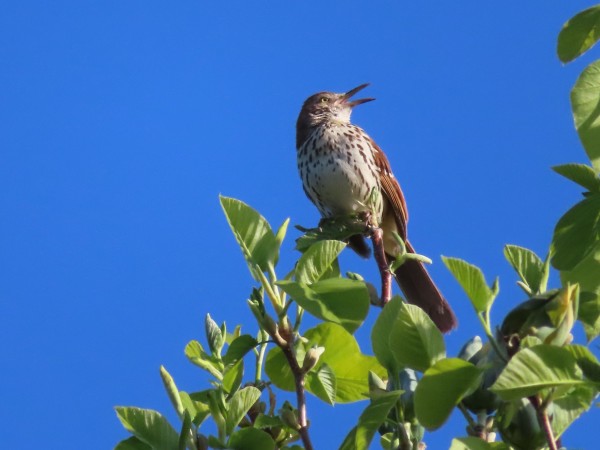 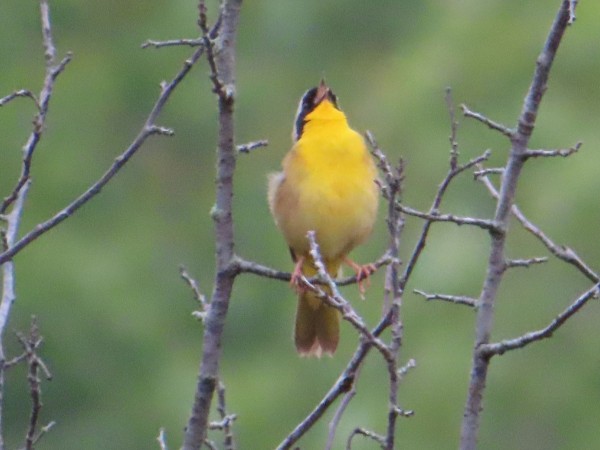 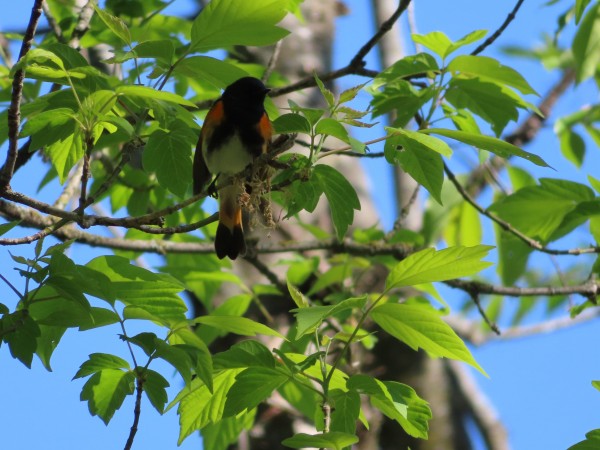 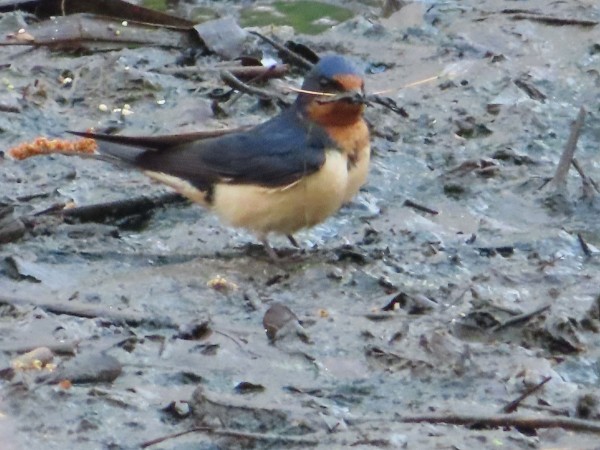 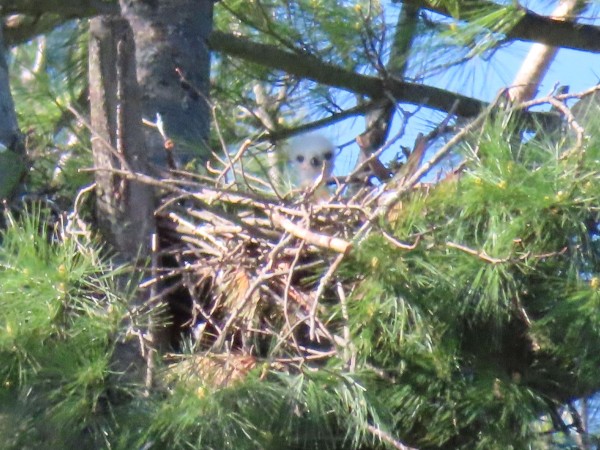 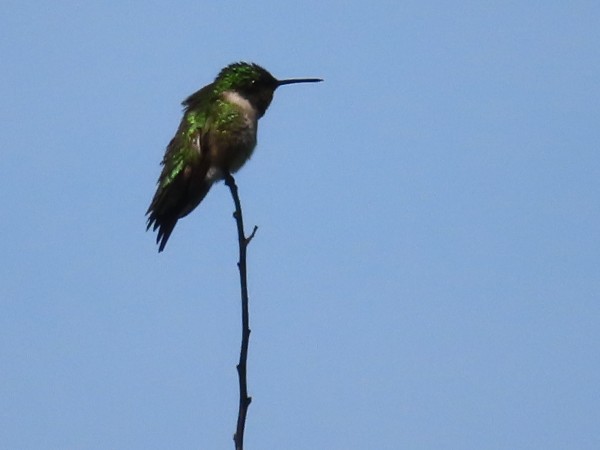 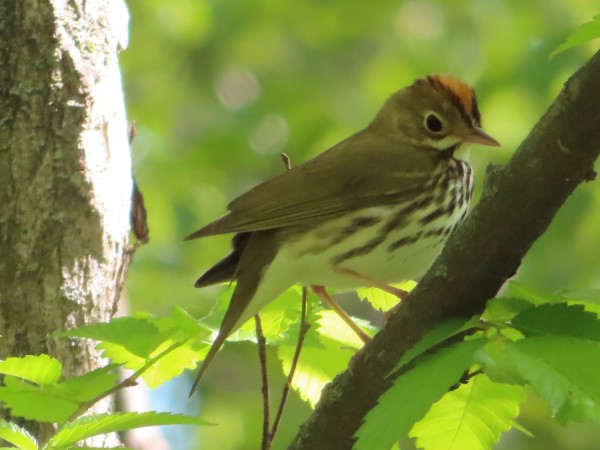 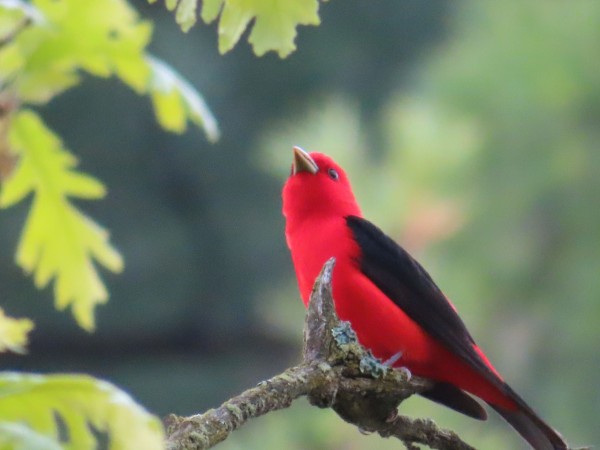 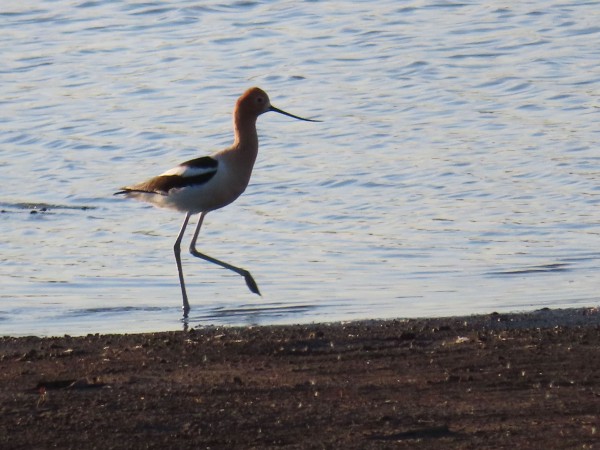 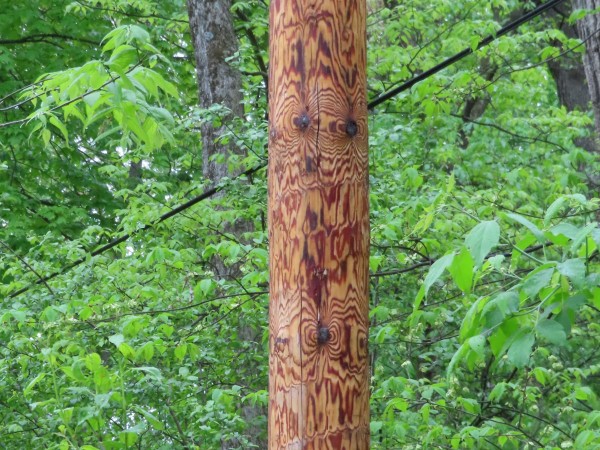