Bird migration continues but it seems like it has slowed considerably. All the groups last week at least heard a new warbler called a Hooded Warbler. One group was even able to see it. For those who were not on the walk or not in the group that saw the Hooded Warbler I have included a photo of the Hooded Warbler that I took a couple years ago. It is mostly yellow with a black hood.

A new bird in the Arb this past week was an immature or first summer Orchard Oriole that I saw and heard it sing its beautifully complicated song both on June 4th and today, June 7th. It is mostly yellow with a black head and throat. A photo is included.

The Scarlet Tanager is still around. I saw it first on May 16th and last on June 4th. It’s such a stunning bird with its mostly bright red body and black wings and tail. It would be very special to have it nest in the Arboretum this year.

I’m seeing more birds carrying material for nest building. This morning down at East Curtis Prairie I saw a pair of Cedar Waxwings gathering sticks and grass and flying to a small oak tree hanging over the trail to add to the nest. A photo of a Cedar Waxwing is included. It will be fun to see the nestlings from an easy vantage point.

I saw an Eastern Bluebird carrying nesting material, mostly grass, to one of the nest boxes. It could be a second nest. I also saw a Gray Catbird carrying nest material to a pine tree in the pinetum. So lots of nests are being built.

I saw my first speckle-breasted, fledgling American Robin today so the robins are nesting now. A couple days ago I saw two fledgling Eastern Bluebirds in the Crabapple Collection not far from a couple of the nest boxes there. A photo of the young bluebirds is included.

European Starlings are not my favorite birds but the difference between the plumages of the adults and their fledgling is quite dramatic. Adults are usually shiny black with some iridescence and also some light spots. Their beaks are light yellow. Fledglings are dark brown to gray and have dark beaks. Their begging for food is harsh sounding.

The other large bird with growing young are the Sandhill Cranes. There are two adults and two young. Initially they hid for a couple weeks before bringing their young called colts out in the open. Now they can be seen on Longenecker Gardens but most recently on West Curtis Prairie. A photo of the four on West Curtis is included. The adult crane parents walk in the prairie and find food by “jack-hammering” their beaks into the ground to find roots of plants which they present to their nearby colts. The transfer is quick and hard to capture but I tried and a photo is included. The colts are growing quickly.

My last bird is one that I have been seeing each day most often perched at the top of a small dead tree apparently surveying its territory. It is the male Ruby-throated Hummingbird. Today I saw one nectaring on the blooms of White Wild Indigo. They are amazing tiny birds. A photo is included.

That’s the Arb Bird Report for the past week. 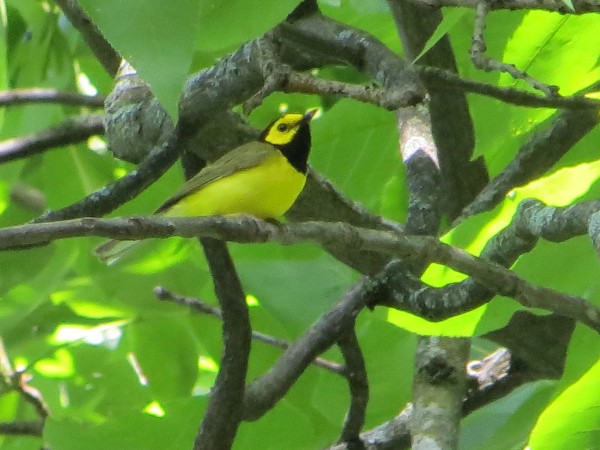 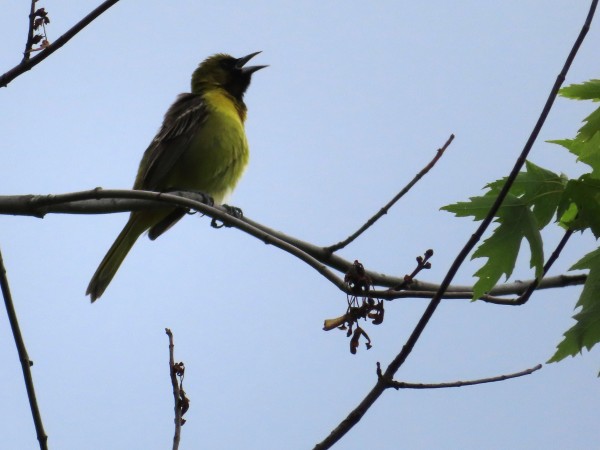 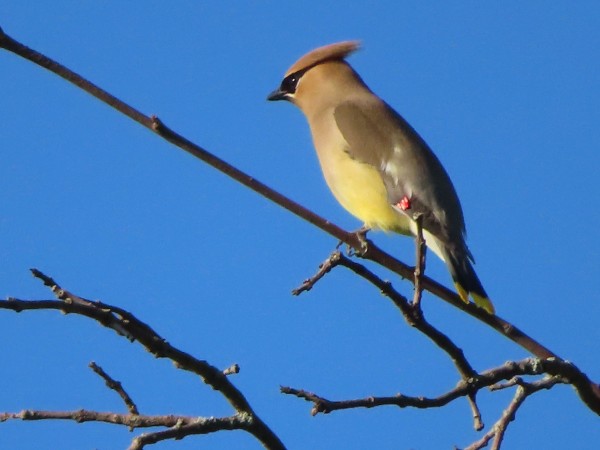 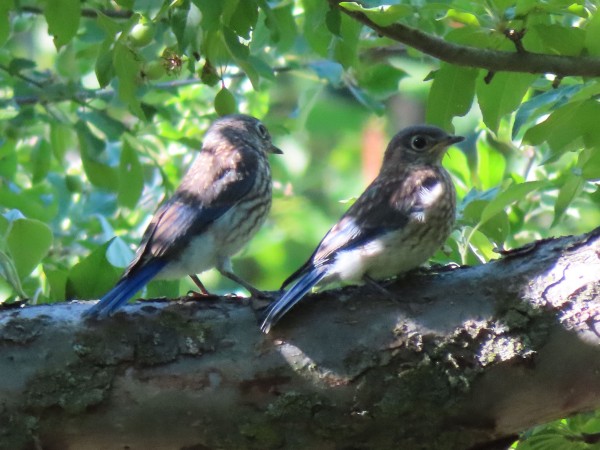 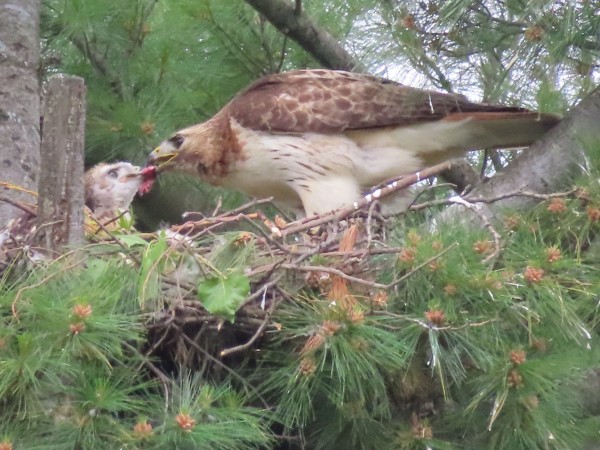 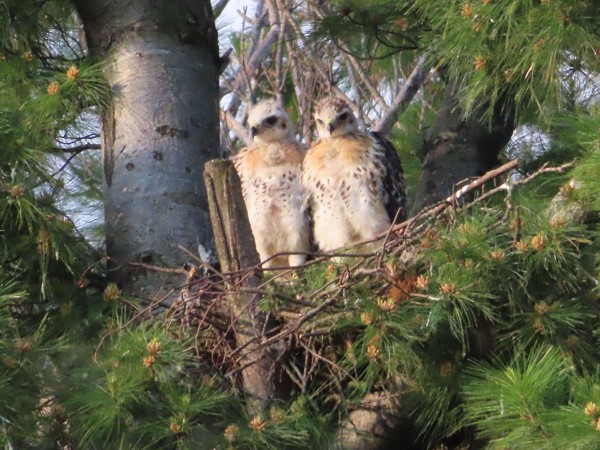 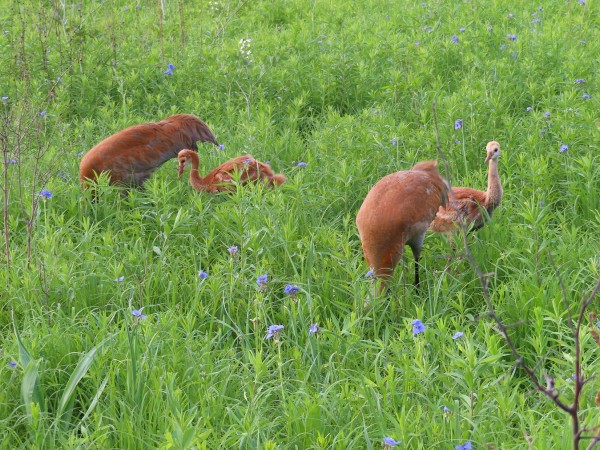 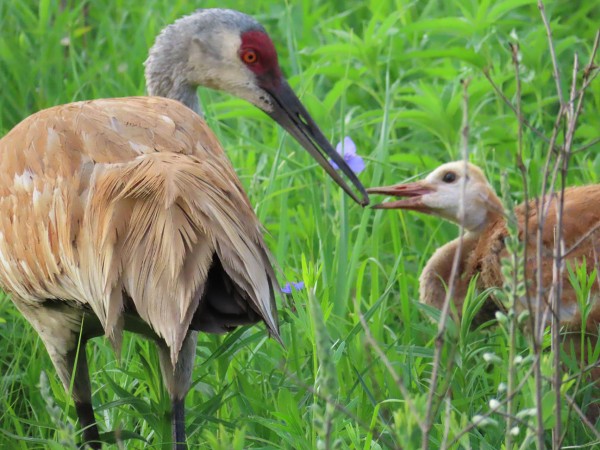 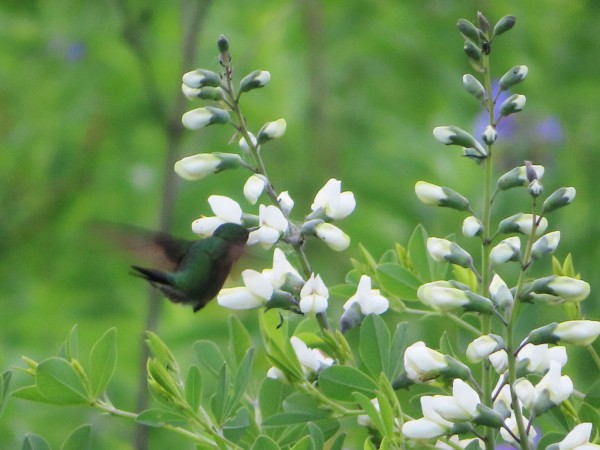