Let me start this week’s report by answering the quiz question about the identity of the butterfly that was perched on my hand. It is a Viceroy Butterfly. It is very similar to a Monarch Butterfly with its orange and black markings however the Viceroy has an extra black, almost horizontal, black line in its hind wing which the Monarch lacks. In addition the Viceroy is smaller but that may not be obvious unless the butterflies are near one another. Did anyone have a butterfly land on them this past week? It’s a special experience when it happens.

I really haven’t seen any new birds in the Arb this week so I think migration has mostly ended. What I am seeing is more nest building, birds sitting on nests, birds feeding nestlings or fledglings and birds being more quiet during this nesting period.

Last week our group saw two very young Killdeer accompanied by their mother down at the edge of the small pond just south of Pond 2. Actually we saw one young Killdeer first and then another that appeared after the adult Killdeer stood up. She was actually sitting on her youngster. Both youngsters were fuzzy balls of down feathers. A photo is included.

Very near that same area we also heard the one note call of a Baltimore Oriole. We found it perched at the top of a dead tree (snag). It was in a great place for easy identification and for picture taking. It was a male with bright orange and black markings. A photo is included.

Also last week I showed a photo of an American Woodcock seldom seen in full daylight. Chris Kregel, a member of the extremely important Arb land care team, was able to capture a photo of a young bird I’ve never seen. It was another fuzz ball. It was a young American Woodcock not more than a week or two old. What an amazing find not far from Teal Pond. The photo of the young woodcock is included. Thanks Chris for sharing your rare find.

I think I mentioned last week that I had seen my first speckle-breasted American Robin. This week I saw a couple more but I also so an adult feeding one of these young robins. I didn’t quite capture the feeding but the adult and fledgling are facing head to head for comparison. The photo is included.

It has really been a treat for me to watch the Red-tailed Hawk nestlings grow up. The adult would initially bring in a rodent, tear it apart and feed it to the nestling. A week or two later the adult would bring in the rodent, tear it apart and let the nestling choose the pieces they wanted to eat. More recently the adult has been bringing in a rodent and just dropping it in the nest for the nestling to tear it apart themselves and then eat what they want. As the young have grown they have moved out of the nest to nearby branches. They are now farther away from the nest but return to the nest to eat food dropped by the adult. I haven’t seen the young actually fly to catch their own food but I’m sure that will soon happen. They do flap their wings a lot. I’ve included two photos, one of the adult and the other of the fledgling.

A couple days ago I heard the characteristic doublets of the Brown Thrasher. I hadn’t heard its multiple calls for at least a couple weeks. I finally found it perched at the top of a Honey Locust tree. It such a beautiful bird in a beautiful setting. A photo is included.

This morning I saw a little bird feeding in some tall grasses right next to the parking lot. It was a Blue-gray Gnatcatcher which actually looked a bit blue today. It would feed for a minute and then fly right past me but very close to my head and land in a small oak tree behind me. This was repeated three times making me wonder if its nest were in the tree. I really like these little guys. A photo is included.

My last photo is of an adult Sandhill Crane. We’ve all seen a sandhill tuck its beak and even it entire head under its wing. What I like about this guy is that even though its in a sleeping posture it is still keeping an eye on me.

That’s my Arb birding report for this week.

All good health to each of you and good birding too, 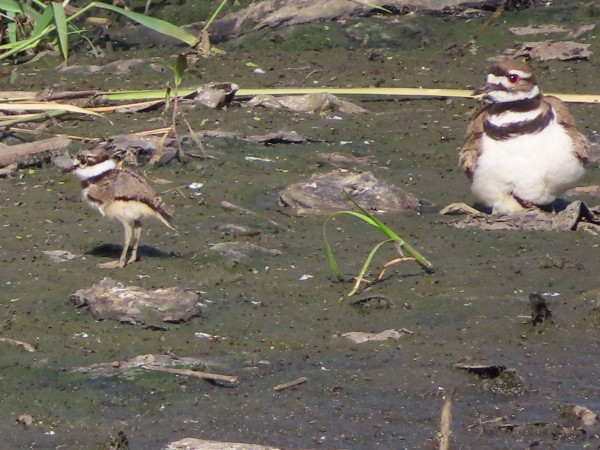 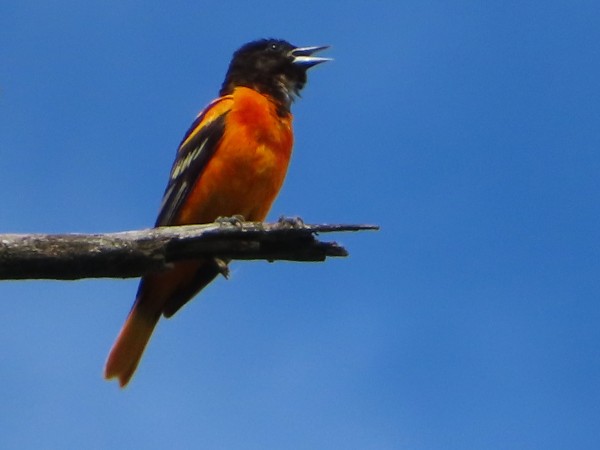 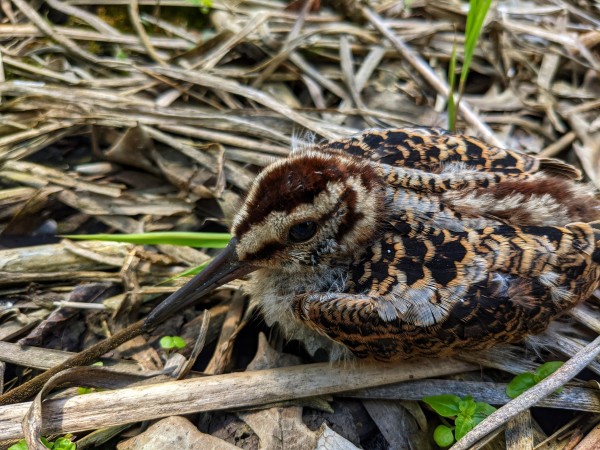 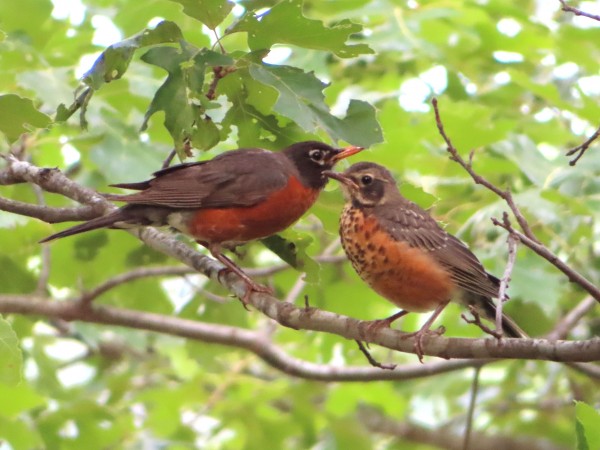 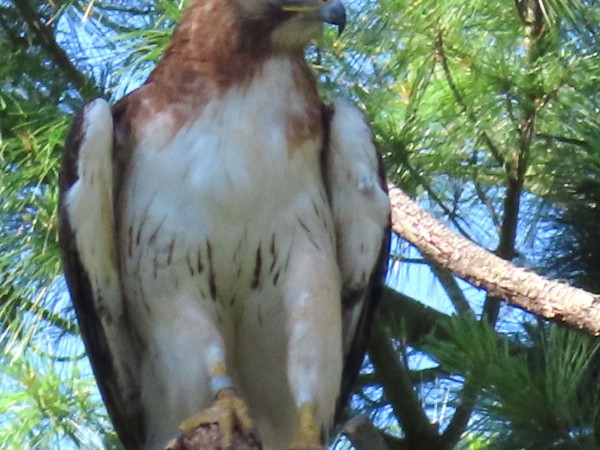 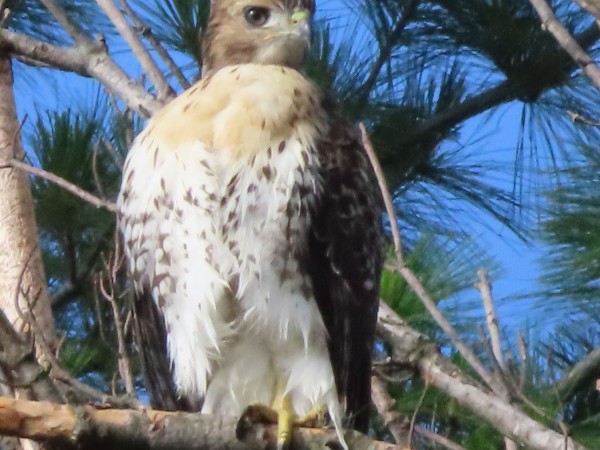 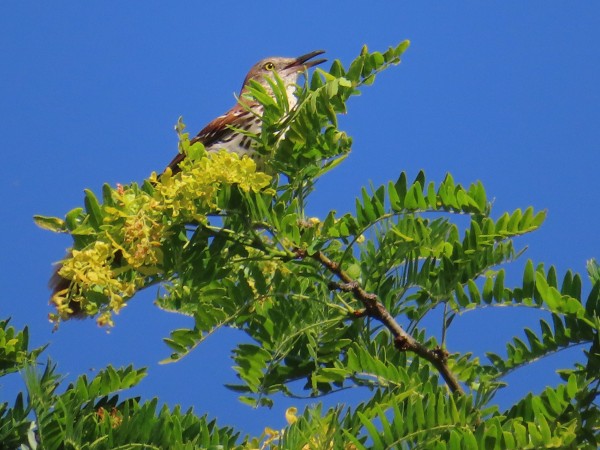 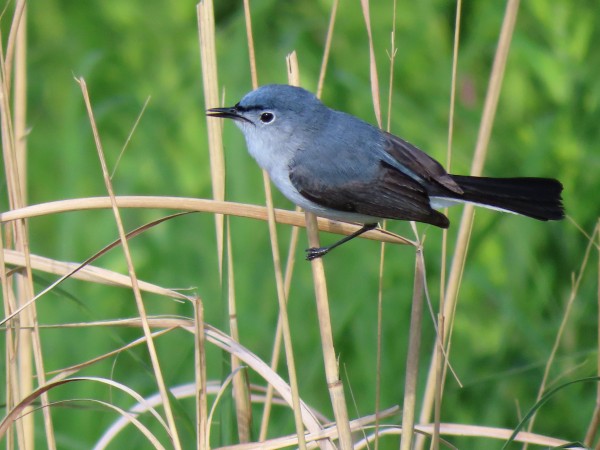 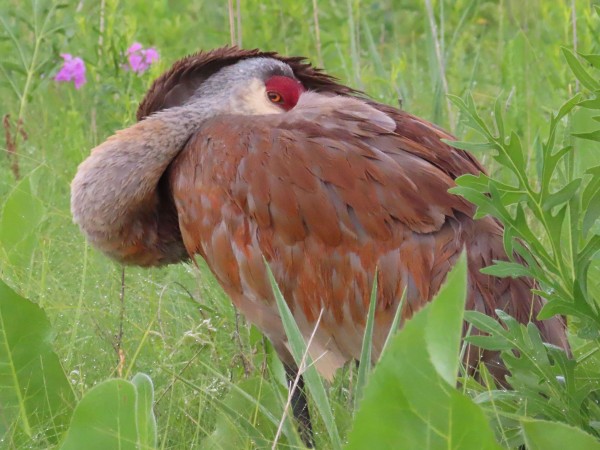