I hope all of you had a great 4th of July holiday weekend. The fourth of July was quiet in the Arboretum but I’m sure that’s how all the birds liked it. I always think of the American Chestnut Trees on July 4th. There are several of them in the Arb. These trees are in full bloom around the 4th and the male catkins that produce pollen for the females are 6-8 inches long and hang down making them look like arching fireworks that explode high in the sky. A photo of one of the many clumps scattered all over the American Chestnut is included.

If you visited the Arboretum over the past week you probably didn’t see any newly arrived birds but there are several new blooming wildflowers. My favorites are Bee Balm (aka Monarda and Bergamont) and the bees love them; Black-eyed Susans with their brilliant yellow petals and dark brown to black centers; Compass-plants with their long stems, up to 5 feet and more, holding many large yellow blossoms and finally Swamp Milkweed with their heads with tiny pink flowers.

Wait, this is supposed to be a bird report so what have I seen this past week. I’ve seen many species feeding their young mostly outside their nests. This morning I saw an adult Yellow Warbler stuffing food into the mouths of two juveniles. Yesterday I saw Barn Swallow juveniles perched on a powerline next to the parking lot waiting for mom to feed them. When mom approached the mouths of the young flew open and mom deposited the food in the mouths while she flew by.  A photo of the two Barn Swallow juveniles is included. Many other species are feeding young too.

The two juvenile Red-tailed Hawks are now out and about. They don’t seem to stay together but are both on their own. The other day I saw one of them on the ground. At first I thought it had caught something and was trying to eat it. I was wrong. It was attacking a stick, picking it up, throwing it on the ground and grabbing it with its talons and beak. I don’t know what it was doing. I guess that’s just weird teenage behavior. A photo of the juvenile hawk with a stick in its beak is included.

Every birder I know told me that there was a Sedge Wren in Curtis Prairie straight down the path from the pumphouse. I’ve been there many times. I can’t hear it so I need to see the bird. Finally it appeared from the tall grasses and perched high enough for me to see. It was a first of year bird for me.  I was the last birder in the county to see one. A photo of a Sedge Wren is included.

I’m still seeing the most Indigo Buntings I’ve ever seen in the Arb. I think there are at least 5 or 6 males between West Curtis Prairie and Teal Pond. That’s a lot for the Arb.  I’ve included still another photo of the male Indigo Bunting. That blue color is amazing. I hope all these males have found females and are nesting and producing young.

There are many Gray Catbirds throughout the Arb. They are always talking. They seem to have a lot to say. They also say it in many different ways. It’s really fascinating to listen to them vocalize. I never get tired of it. A photo of a Gray Catbird is included.

I heard the Scarlet Tanager singing today. It always stays high in the canopy so I seldom get a good look let alone a photo. I hope it has found a mate too.

Not in the Arb but in Dane County I went to see if I could find an Upland Sandpiper. I’ve tried several times but always strike out. A couple days ago I got lucky and heard its unique and somewhat bizarre call. Several years ago another birder and I walked out on the prairie and stopped nearby a large rock pile which had been made by a farmer years ago as he removed rocks from his plowed field. I can’t imagine how much work that would have been. As we stood near the rock pile we heard the Upland Sandpipers approaching us. We froze and did not move. Three landed on the rock pile. This is where I took control of nature. I told the sandpipers to stand at different heights on the rock pile and evenly space themselves apart. Just before I took their photo I told all three to look to the left. The photo I took is included. Of course my control of nature is fiction. I just got a once in a lifetime shot of Upland Sandpipers.

My last photo is of a Monarch Butterfly nectaring on a Common Milkweed flower head. I see at least 10-15 each day as I bird around the Arboretum. They are stunning and need all the help we can give them.

That’s my bird report for this week. 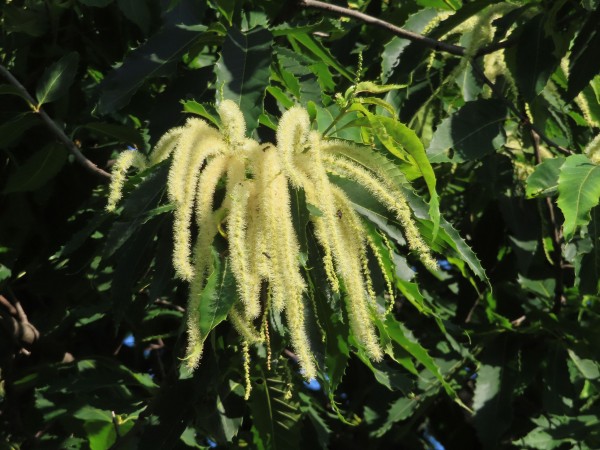 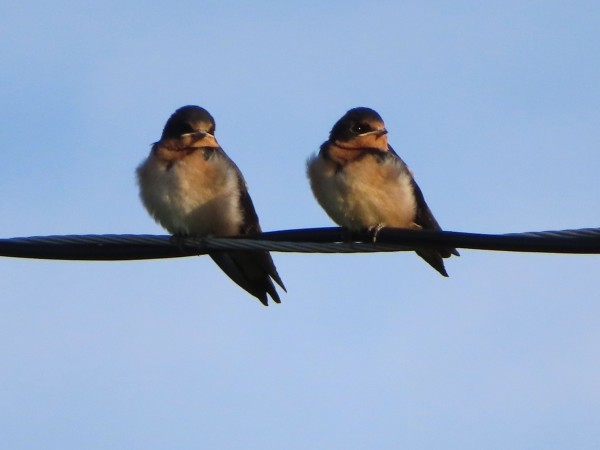 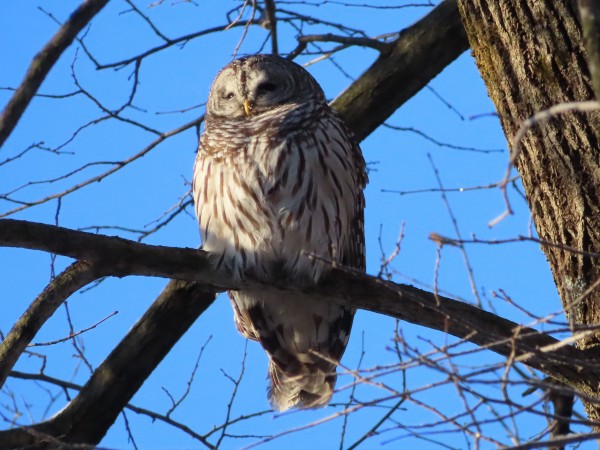 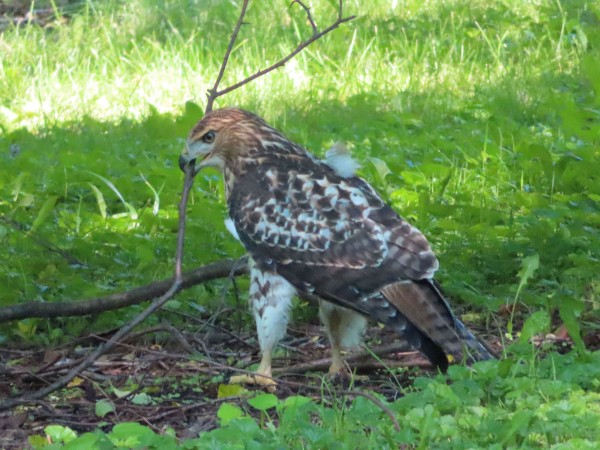 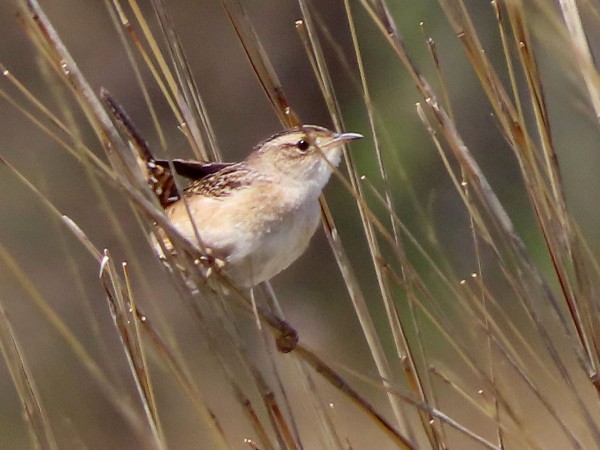 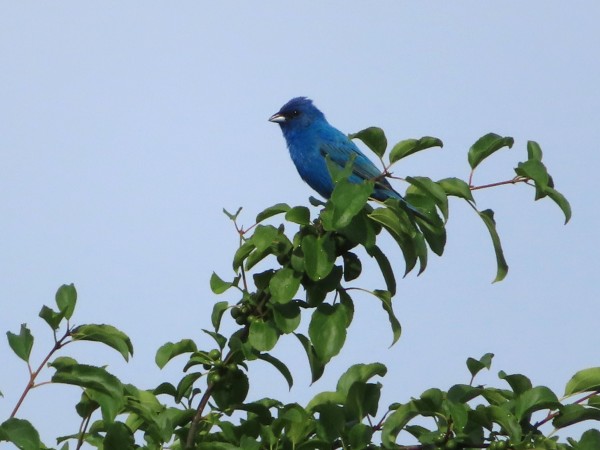 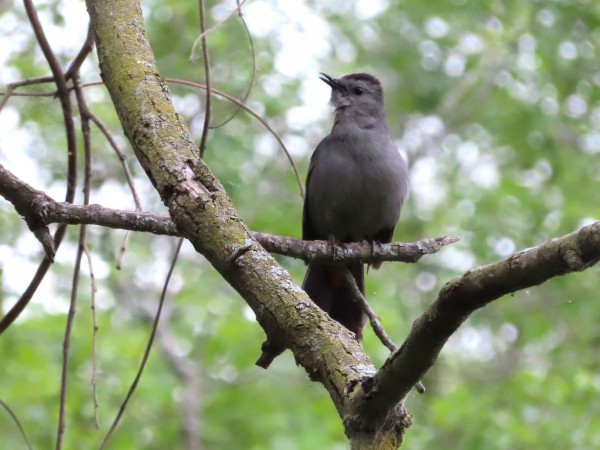 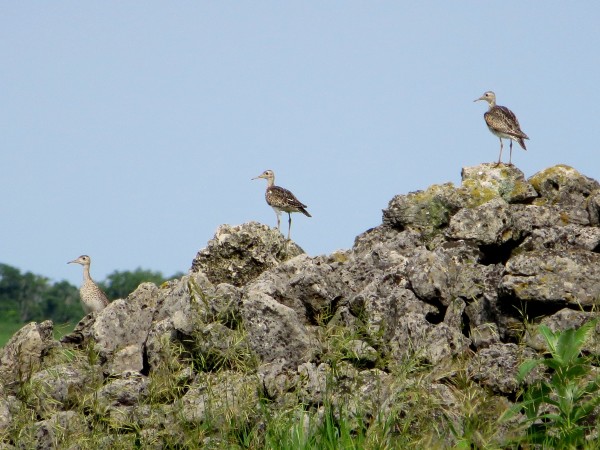 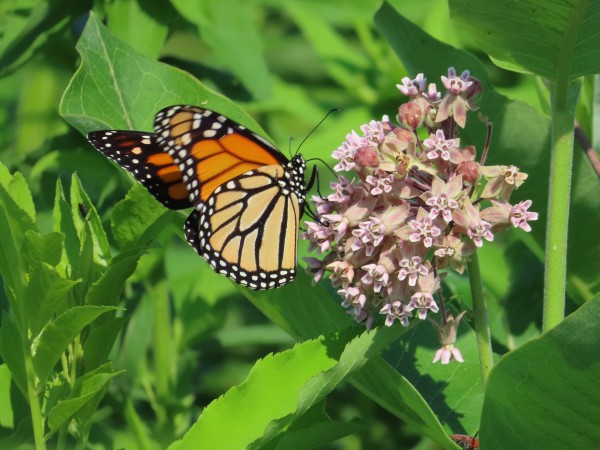