The plants in the Arboretum continue to grow and change. The tall plants I mentioned last week are taller and have more blooms. What I noticed this week was the growth of a grass called Big Bluestem. It has also been called Turkey Foot. Right now most of the Big Bluestem are tall spikes that are taller than I am. A few have sprouted seed head that have three or more prongs at the top end. When there are three it looks like the toes of a turkey foot thus the common name. Watch for the Big Bluestem when out birding. In the fall watch for birds eating the seeds.

Last Tuesday on our walk we cam across two large species of birds. Down at Pond 2 there was a Green Heron perched on a dead tree near the boardwalk. We walked all around it and it never flew away. It evidently liked having its photo taken. Thank you Green Heron. A photo is included.

As we stood on the boardwalk we could see an Osprey just north of us perched in a tall snag. It was eating something, most likely a fish. I did get a photo but it was too distant so I’ve included a photo of an Osprey from last year who was perched in the same tree eating a fish.

A common sight this past week has been fledgling swallows, both Tree and Barn Swallows perched on branches or powerlines waiting for parents to fly by and poke food into their mouths. We saw one group of 4 Tree Swallow fledglings huddled shoulder to shoulder and perched on a bare branch. It was just too cute. When an adult flies by they all flutter their wings and open their beaks widely. I wonder how an adult chooses which of the four mouths to put food in. A photo of the four fledglings is included.

Also on Curtis Prairie we often see and hear Willow Flycatchers. They often throw their head skyward and call “fitz bue” to attract females or protect their territory. A photo is included.

I’m seeing some Cedar Waxwings in the Arb but they are only singles or pairs. After their babies fledge and grow a bit they will begin to form flocks. Included is a Cedar Waxwing single in the dead tree next to the parking lot.

Last Tuesday one group saw or heard a Marsh Wren so I thought I would include a photo of one to this week’s report.

This morning on my walk in the Arboretum I came upon the family of Sandhill Cranes we’ve been watching all summer. They were at the east end of the Visitor Center’s parking lot near the big Oak Tree but feeding in the mulch pile near the tree. They evidently were finding good eats. The included photo shows their interest in something good to eat.

I will finish off my bird report with a non-bird and one of my favorite photographic subjects. It’s a Monarch Butterfly (what else) nectaring on a Purple Coneflower. Don’t they make a great pair?! 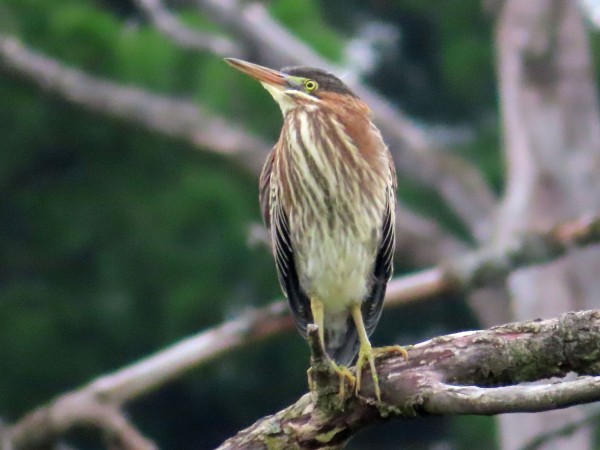 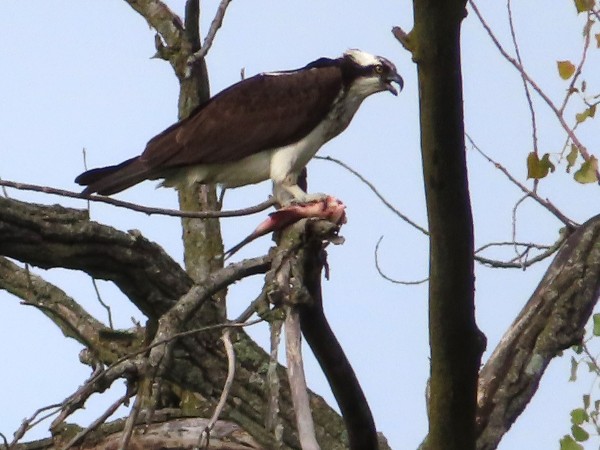 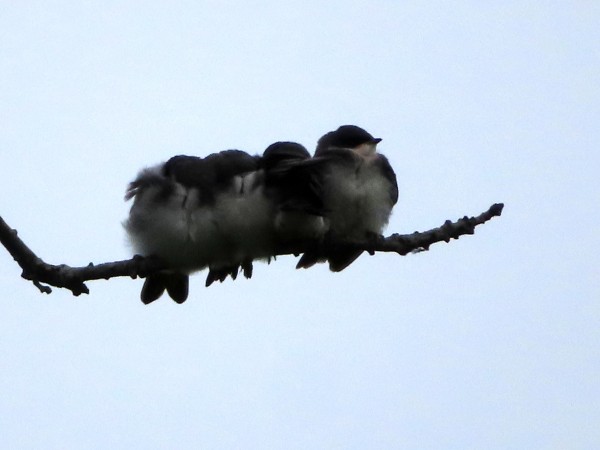 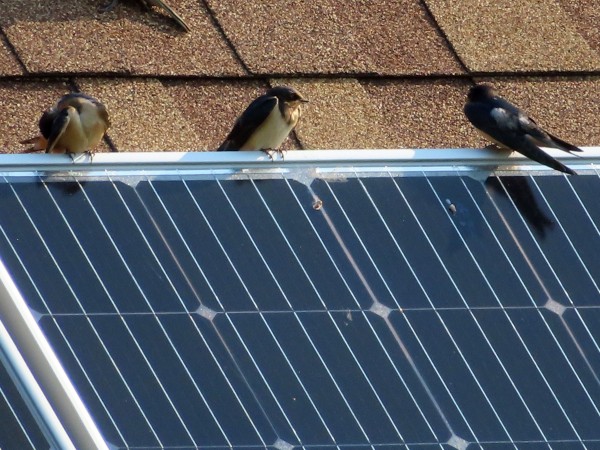 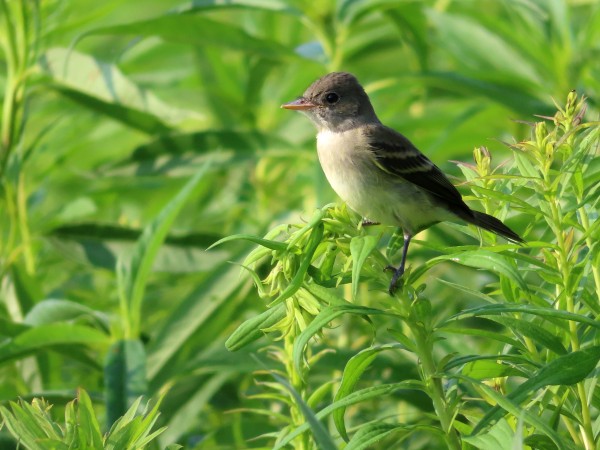 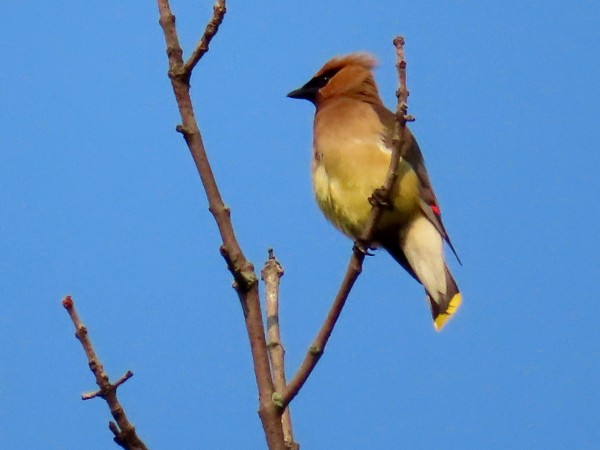 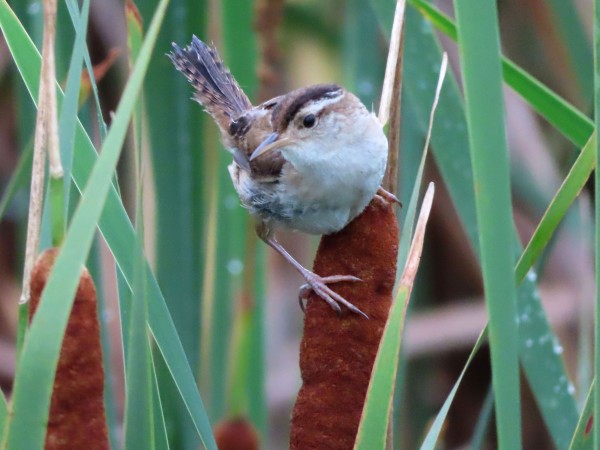 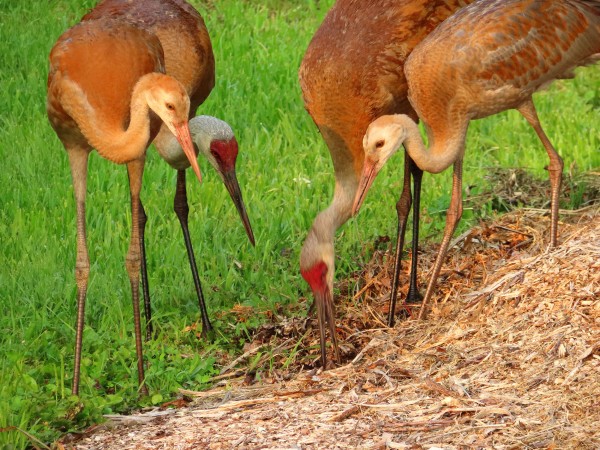 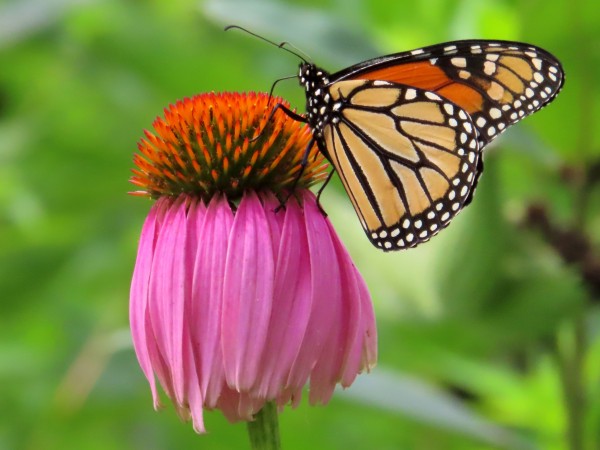