Are you suffering from the Covid-19 Blues or maybe political fatigue? I have the perfect cure for either or both of those. Come over the UW Arboretum and take a hike to any and all parts of the landscape. There are lots of birds to behold. Make a list of what you see if you prefer. If you don’t feel like birding, maybe the breathtaking blooms of the wild flowers, especially the yellows of the 10 foot tall Sawtooth Sunflowers will lift your spirits. There are also Monarchs and other butterflies still flitting over the prairie. Bumble bees love the thistle blooms and dragonflies are still making me think they are hummingbirds. Bathe yourself in nature and go home totally refreshed.

Bird activity this past week has really been affected by the weather.  It started with cold and wet conditions. I birded in it every day but it was not the most pleasant experience. It was more a test of my rain gear. Birding was rather slow and not very productive but I must say sometimes rainy days can be very birdy. The food for the week has been Gray Dogwood berries. The most numerous migrants eating those berries were Swainson’s Thrushes and Red-eyed Vireos.  Also gobbling down those little whites were Brown Thrashers, American Robins, Gray Catbirds, Northern Cardinals and several other species. To my surprise I even saw Downy Woodpeckers eating the berries. I think I mentioned this before but these berries contain almost 40 percent lipids/fats. What could better prepare birds for migration.

The weather in the latter part of the week began to warm up. On Saturday when I arrived at the Arb and stepped out of my car I was greeted by mosquitoes which were absent during the cold days. They were hungry.  (On the way home I stopped at the Red Cross and asked for a pint.) I also saw flycatchers flying around the tops of trees seemingly catching insects. When I walked through the woods on the north side of Curtis Prairie I saw through my binoculars a couple large swarms of insects. The rain and warming weather had produced a huge hatch of insects. I don’t know what kind they were but the birds loved them. There were over 50 Chimney Swifts (I normally only see a handful flying over the Arb) and large numbers of Barn and Tree Swallows too. They were flying through the swarms and having a feast. I’m sure they all took naps that afternoon. It was an amazing sight. The bluebirds were picking the insects off the branches of a snag. Today was the best day of the past week. There was a huge migration of birds during the night and they all came down today to rest and find nourishment for the next leg of their journey south. If you Google Birdcast and look at the active radar map for September 13th overnight into the 14th you can tell how good the migration was. Wisconsin is bright yellow indicating that during the middle of the night 1000s of birds were on the move south.

So how was birding in the Arb today? Paul Banas and I both counted over 50 different species in the Arb. A few special species I saw were 19 Swainson’s Thrushes (26 yesterday), 11 Red-eyed Vireos, 6 Ruby-throated Hummingbirds (not dragonflies), a Rose-breasted Grosbeak, a Merlin and a Philadelphia Vireo. But the special birds of the day were warblers. There were small groups here and there. I ended the day with 10 different species. I’m sure others around Dane County had 20 or more warbler species on their lists today.

My best spot to bird this morning was at Big Spring. The conditions were perfect. It was warm, calm and I could see numerous insects flying over the outflow of the spring. The Cedar Waxwings were flying from side to side capturing insects. The Eastern Phoebes were sallying out, grabbing insects and returning to a branch to perch and bob their tails.  A Ruby-throated Hummingbird was nectaring on the Jewelweed flowers on the edge of the spring. A Northern Waterthrush jumped from one large rock to another picking up food along the way. A Belted Kingfisher with its rapid fire, staccato call came flying in, perched long enough for the attached photo to be taken and then left. American Redstarts were also capturing insects around the bushes at the spring’s edge. I was most excited to see three Yellow-rumped Warblers flying from one side to the other, back and forth, feeding on insects in the air and in the bushes. Those were the first Yellow-rumps I had seen this fall. Yellow-rumps are the first warblers to arrive in the spring and the last to leave in the fall. I’ve attached a photo of one of the Yellow-rumps. Notice how bland its fall plumage is. It is mostly shades of brown but it still has a yellow rump but not shown in this photo. Its spring plumage is striking in shades of black and white and yellow. The arrival of the Yellow-rumped Warbler in the fall usually indicates that warbler migration is nearing its end.

The most surprising finding at Big Spring this morning was a juvenile Black-crowned Night-Heron. This was a first of the year bird for me. The adult looks very different.

Stay well and good birding to all of you, 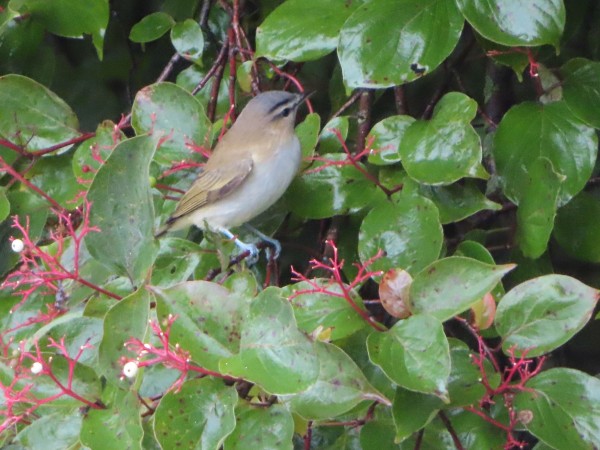 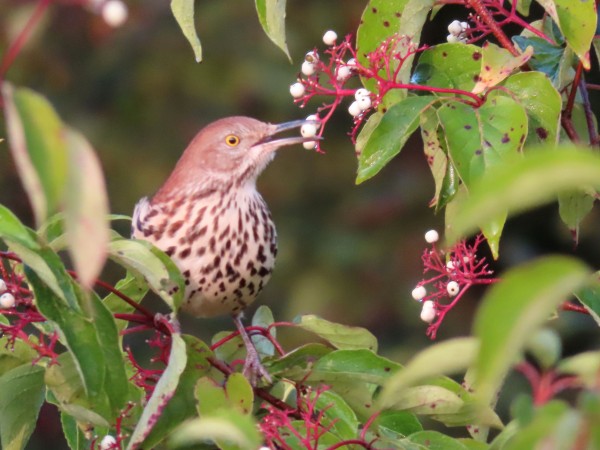 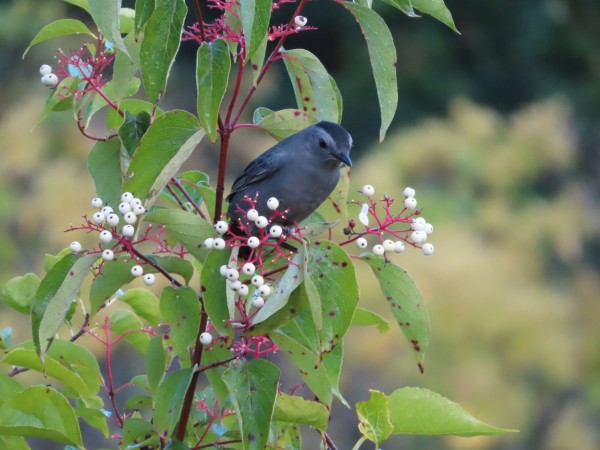 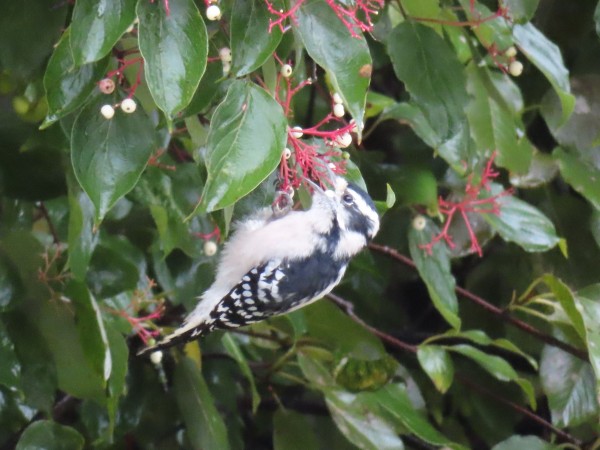 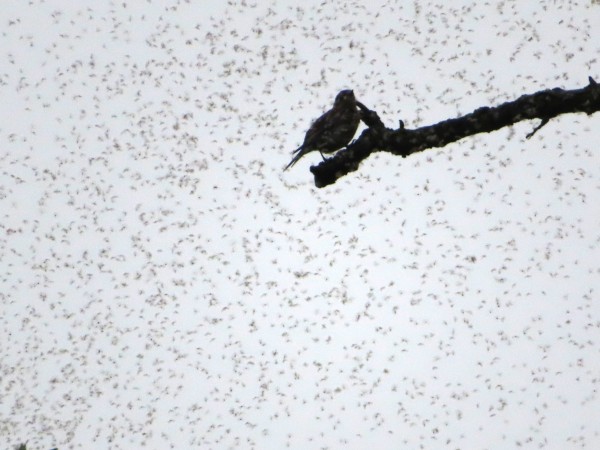 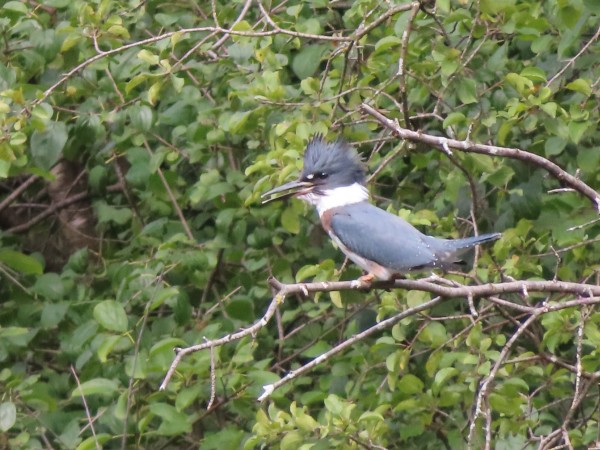 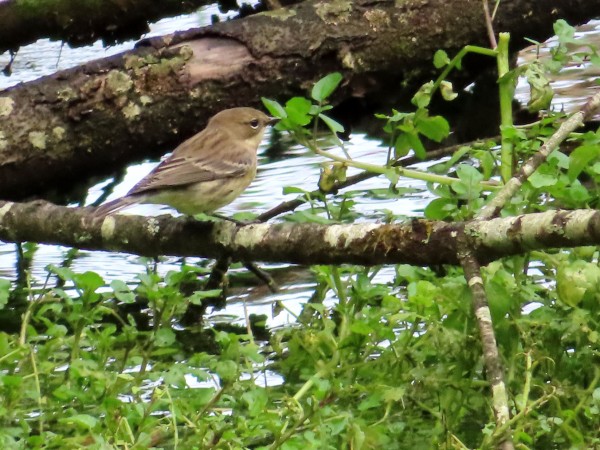 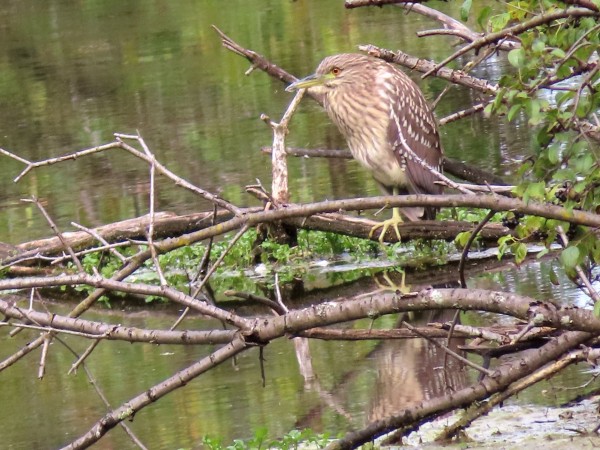