For the past three days I’ve gone to the Arb to bird and I’ve started between 6:30 and 6:40 am. I always start at the Visitor Center parking lot. For those three days in a row, a few minutes after I arrive in fly 8-10 cawing American Crows as if to welcome me to the Arb. Well, that’s how I interpret what they are saying. They always land in the small snag (dead tree) between the north and south parts of the parking lot. They may continue to caw a bit but usually get down to some serious preening. A photo of this murder of crows is attached. This morning a Cooper’s Hawk came flying in and landed in the same snag but perched just below the crows. I thought that would really set the crows off but they did nothing. I tried to capture the moment with my camera but being camera shy the Cooper’s took off before I could get the shot. I asked the crows why they didn’t raise a stink when the Cooper’s flew in but they remained uncharacteristically mum.

Have you noticed any changes in the environment now that fall has arrived? I mentioned leaves falling last week but neglected to mention that some tree leaves are beginning to change colors. Some maple and ash leaves are turning reds and yellows. The small trees that stand out on the prairie are the sumacs that have turned a brilliant red. I always encourage birds to hangout in the sumacs in the fall so I can take photos of them in the sumacs. Attached are photos of a White-throated Sparrow and a Black-capped Chickadee close by red plumaged sumacs.

What are the birds eating these days? There are still a few gray dogwood berries left but very few. Some new berries have ripened on Virginia Creeper, the Black Tupelos and the Junipers. Virginia Creeper is a vine that can climb to the top of tall trees.  In the fall the leaves of the Virginia Creeper turn red so a tree can have a trunk that is all red and have its own leaves a totally different color. In addition the Virginia Creeper has lots of dark colored berries.  In one vine I saw American Robins, Gray Catbirds, Swainson’s Thrushes, Red-bellied Woodpeckers and Scarlet Tanagers feasting on the berries. The Black Tupelo is more a native of the east coast but the Arb has a large one at the west end of the Visitor Center and a couple more at the east end of Longenecker Gardens. Its leaves will turn a rich dark red and tucked between are many dark berries. A couple days ago 3 flocks of Cedar Waxwings totalling about 70 birds were flying in and out of the Tupelo plucking berries on each entry. Other birds like the berries too. Cedar Waxwing were also gobbling up Juniper berries.

To my surprise there are still a good variety of warblers around but the most numerous is the Yellow-rumped Warbler. In past reports I’ve mentioned that many of the warbler species have a much different plumage in the fall when they are just trying to get to their southern winter habitats without being noticed by predators. As an example of plumage differences I’ve attached two photos of the Yellow-rumped Warbler. One shows the bright plumage of the spring Yellow-rump and the other shows the muted plumage of the fall Yellow-rump. Down at Big Spring this morning there were at least 10 Yellow-rumped Warblers actively feeding on insects over and along the sides of the outflow of Big Spring. Last week I said that the appearance of Yellow-rumps usually indicates the end of warbler migration. What I meant by that is that most of the warblers have migrated through the county and are still migrating but are farther south.

What new birds have arrived in or are passing through the Arb this past week? The one that has impressed me most has been the Blue-headed Vireos that I’ve seen for five days in a row. I even saw three on one of those days. I’ve failed at photographing them so please look them up in your bird books, bird apps or Google them for good images. They are handsome birds with their white eyerings joined across the top of their beaks forming spectacles. Some years I don’t see any so this year has been really special. Another surprise arrival were the Dark-eyed Juncos. I saw three of them on Longenecker Gardens the other day. A photo is attached. Some will stay all winter in the Arb and return north in the spring. When I see the junco I think of snow. No no, not yet! I had a Peregrine Falcon pass near me yesterday. I seldom see peregrines in the Arb.  I wonder if this is an offspring from the nest at the power plant in downtown Madison. I’ve seen a few Ruby-crowned Kinglets but no Golden-crowns yet.

I saw two interesting behaviors this past week. One was American Crows, Blue Jays and Wild Turkeys eating the nuts from the three American Chestnuts we have in the Arb in Longenecker Gardens. The small nuts are ensheathed by a spiny, burr-like capsule. The burr can open while still on the tree or drop to the ground and then open. Crows and jays were taking the nuts from the open burrs on the trees and flying to another tree to crack open the nut to eat the insides. The Wild Turkeys were under the trees finding nuts to eat on the ground. Oh, and they were all competing with squirrels on the ground and in the trees gathering nuts. The other behavior that was a first for me was watching European Starlings pecking on and possibly eating the tennis ball sized and colored outer covering of the Black Walnut.

To see the final adult plumage of the Wood Ducks go to the southern end of Gardner Marsh seen from Carver St. There are 15-25 Wood Ducks in the water opposite the first small parking lot on the north side of Carver St. Attached is a photo of a pair of males.

All good health to you and good birding as well, 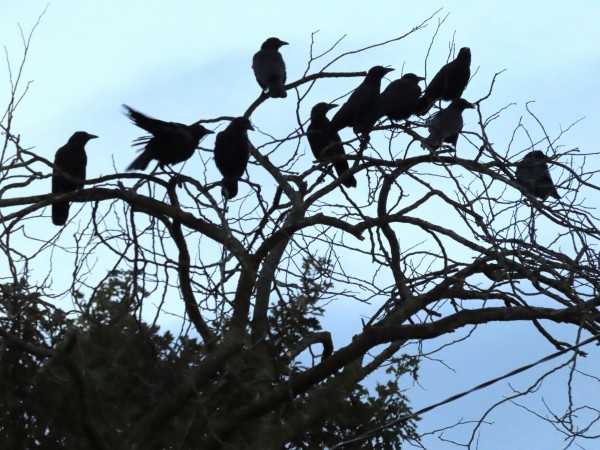 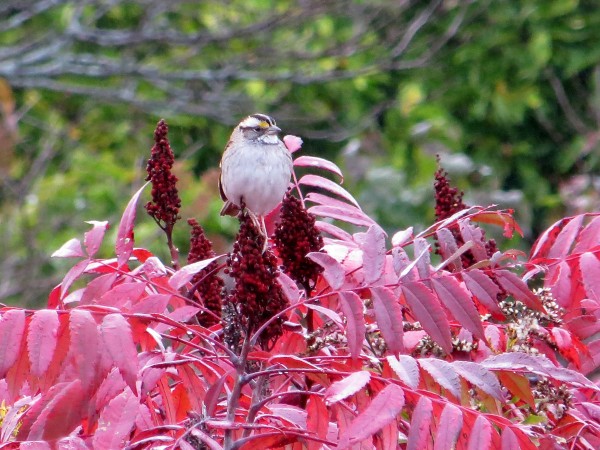 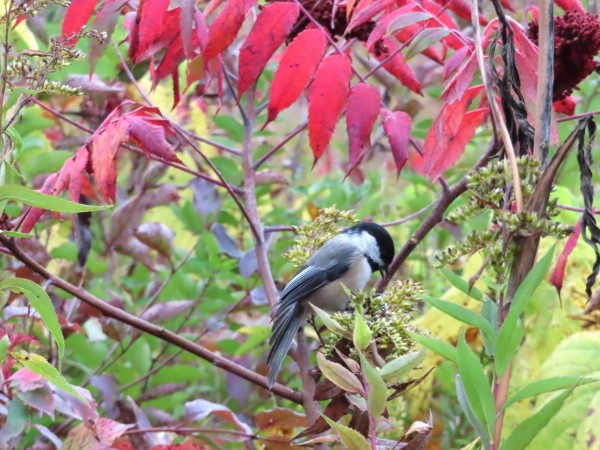 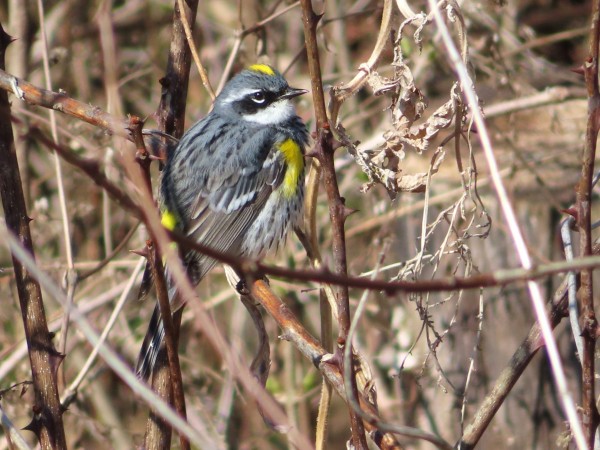 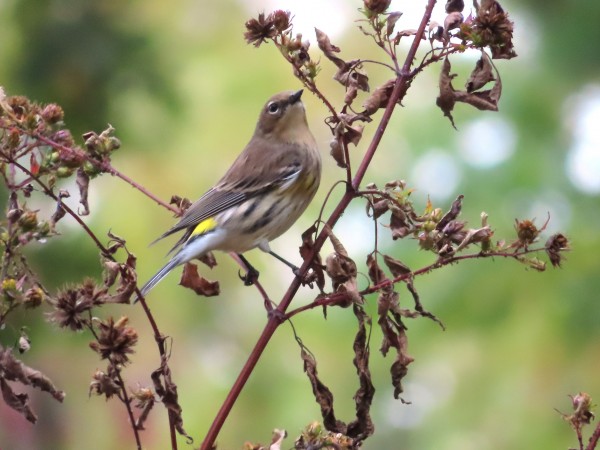 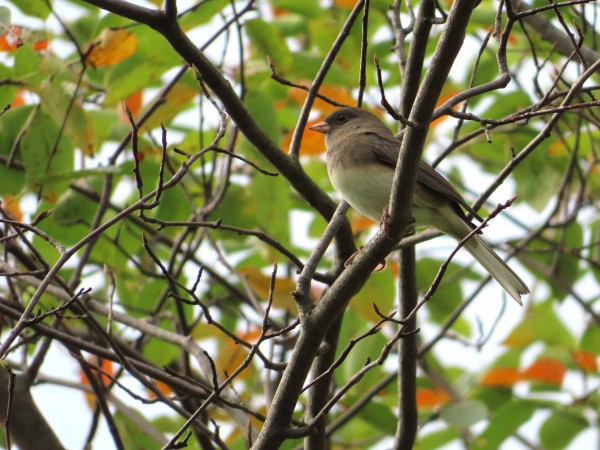 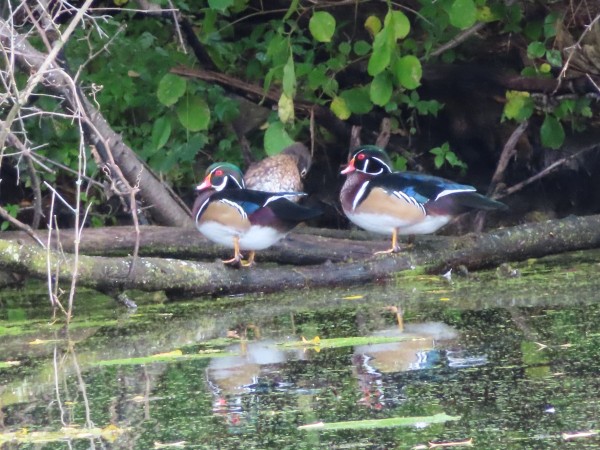