The colors of fall are glorious. They bring smiles to our faces and joy to our hearts. I hope all of you are outside taking in this beautiful time of year.

This past week has had its ups and downs in the bird world. Last Thursday, October 8th, was a way up day. I arrived at the Arb at 6:50am and the sun rose shortly thereafter. The American Crows were there to greet me as usual in the parking lot’s small dead tree. As the sun rose further the bird activity started to explode. There were birds all over the area around the parking lot. I felt like a warbler looking for insects as my head darted from one bird to another trying to identify one species and then another and counting how many of each I saw. A small flock of 4 Golden-crowned Kinglets and then another small flock of 6 Ruby-crowned Kinglets were in a small leafy tree at the west end of the lot. I counted 8 newly arrived Hermit Thrushes as well as 16 Eastern Bluebirds. In the warbler category I saw 8 Yellow-rumped Warblers, 4 Palm Warblers and 1 Tennessee Warbler. In the sparrow group there were 18 White-throated Sparrows, 11 Song Sparrows, 2 Swamp Sparrows, 1 Field Sparrow, 1 Lincoln Sparrow and a FOF (first of fall) Fox Sparrow. Also 8 Dark-eyed Juncos showed up in their tuxedo-like plumage. On the rare side I saw a Blue-headed Vireo, two Eastern Towhees and a straggler Red-eyed Vireo. I finished 4 hours and 40 minutes of birding with 43 species and 334 birds. I was exhausted but thrilled by the experience. What a day!! Could I have predicted it? Yes, if I had checked eBird’s Birdcast that showed the amount of bird migration over the entire U.S. the night before. A couple hours on either side of midnight Wisconsin was glowing bright yellow which meant 1000s of birds were migrating south over Wisconsin at that time predicting a great fallout the morning as I arrived at the Arb.

The next day, October 9th, I went to the Arb with high hopes of a repeat performance but it was not to be. Friday was a down day. The Arb was relatively quiet. I checked Birdcast again and this time Wisconsin was a black of the background indicating that no birds were migrating over Wisconsin the previous night. Was there any part of the U.S. that did have a good migration? Tennessee and Kentucky were glowing yellow. That probably meant that many of the birds that stopped at the Arb the previous day were up and migrating south again creating the bright yellow over those states.  Birdcast can really help all of us birders predict what kind of a birding day we can have.

Besides the Fox Sparrow another FOF bird for me was a Brown Creeper. It crawls on the trunk of a tree like a White-breasted Nuthatch but only climbs up hunting for food in the crevices of the bark. Once reaching the upper levels of a tree it flies to the base of another tree and starts a new journey upward. It’s a small brown bird with white speckles and a downward curved beak.

Have you noticed that there are no bright yellow male American Goldfinches around? Male goldfinches are around but all have changed to their winter plumage which mimics that of the females so you can’t tell the sexes apart. It won’t be until next spring when they change their feather coat back to the bright yellow once again. Have you also noticed that not many birds sing in the fall? I’ve heard a few Song Sparrows sing a little bit. I’ve also heard some Red-winged Blackbirds sing or at least attempt to sing. The poor singers are the young ones just learning their song. Most other birds make short one or two note sounds just to maintain contact with each other. Their main goal is to get to their winter habitat without getting eaten by a predator so they don’t make themselves obvious by singing or wearing a flashy plumage.

Once in awhile I see Downy Woodpeckers out on the prairie pecking on the stems of wildflowers. This seems like odd behavior because I always associate woodpeckers with pecking on trees but I’ve seen enough Downies pecking on flower stems to know this is normal for them.

As I mentioned last week I saw a Yellow-rumped Warbler eating white berries from a vine climbing a pine tree. At the time I did not know what plant these berries came from. However one of our birding group, Janis Cooper, emailed me and told me that the berries were from Poison Ivy. Thank you Janis. Yikes I thought. Does that inflame the GI tract as it passes through? It most likely doesn’t  cause any problems for the Yellow-rumped Warbler or it wouldn’t be eating them. Another photo of the bird and the Poison Ivy berries is attached. Along the same lines are birds that eat Pokeweed.  Pokeweed is poisonous to us but not so for several bird and mammal species. The color of Pokeweed this time of year is striking. 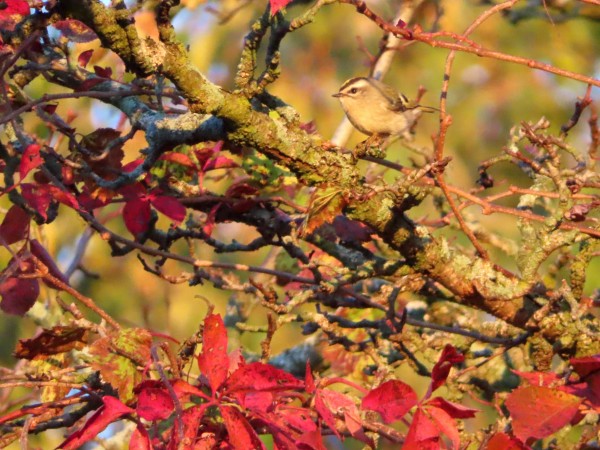 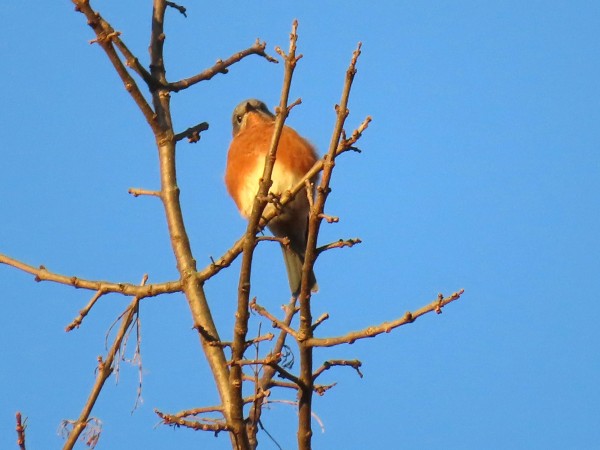 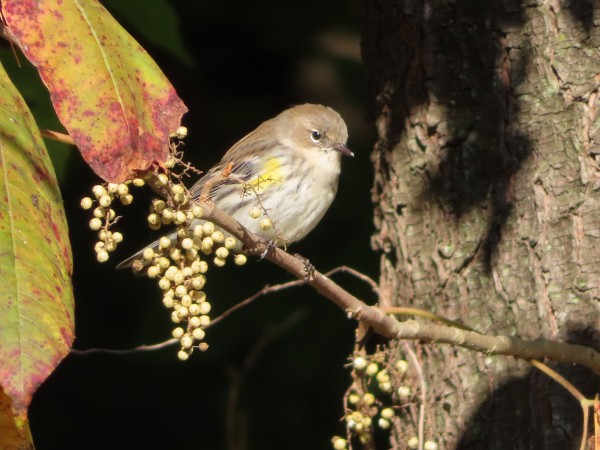 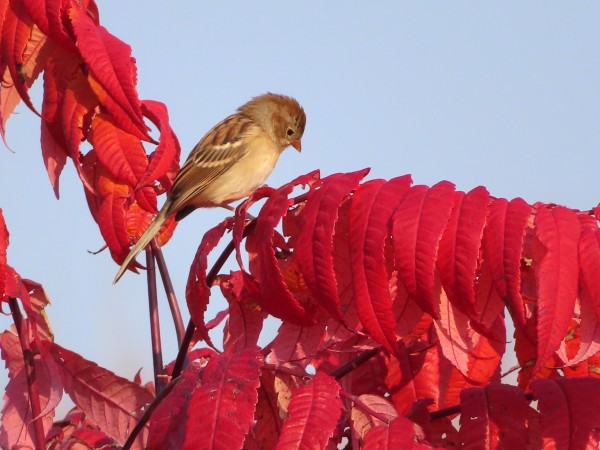 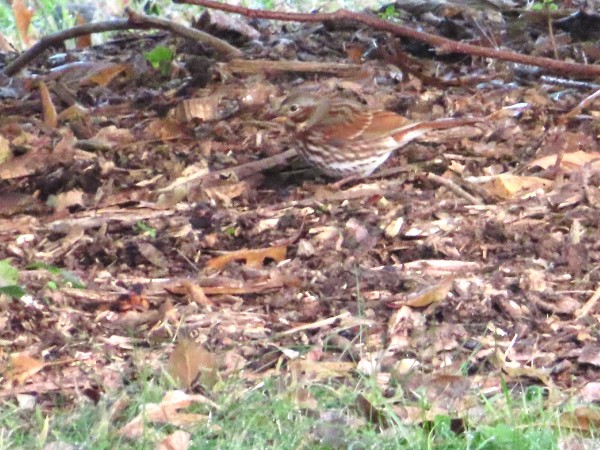 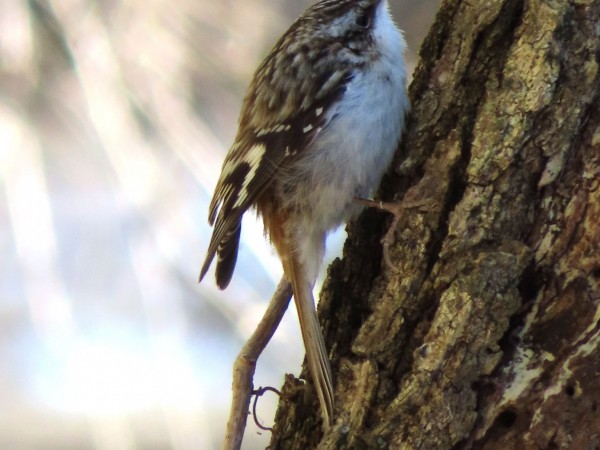 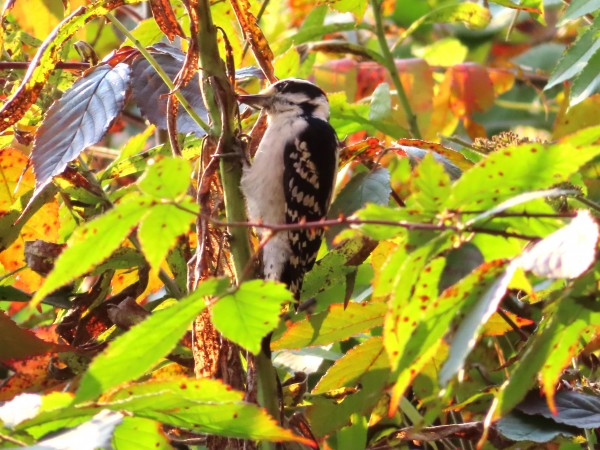 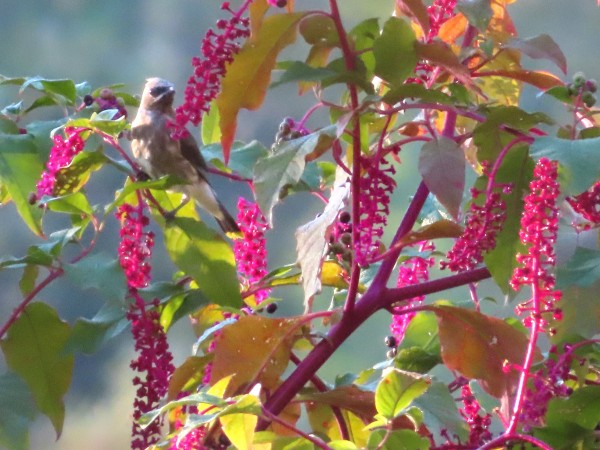