So how did you like the snow we had yesterday and a little more this morning? It was not my favorite form of precipitation in October either. I would rather have fall until, let’s say, Thanksgiving. Luckily not very much snow fell. When I went to the Arb this morning to go birding there was a thin cover of white on the road going in, on the trails and on the fading wildflowers. I think the birds slept in this morning because they were not very active initially. I got better as the morning went on.

Last Tuesday was a perfect day for birding. At first I didn’t know exactly why but then I realized it was a very calm day with no wind. The previous week had been windy every day and the winds were strong. On Tuesday all the birds were out in the open feeding and seemingly having a good time. On Thursday it rained pretty hard most of the day. I still went to the Arb to go birding but it was more a test of my rain gear than a great birding day. I didn’t even bring out my binoculars. I tested myself on naked-eye birding. I was really great with the Wild Turkeys, American Crows and the American Robins but failed miserably on the small passerines. My rain gear did well.

So what are the birds doing in the Arb these days?

Let’s start with hawks. On the Tuesday that was a good birding day, a Cooper’s Hawk was really feeling its oats. It came flying into the dead tree where the American Crows were perched and asked if there were any crows that wanted to play tag. Immediately the Cooper’s started chasing one of the crows and in return another crow chased the Cooper’s. That continued for a few minutes. I enjoyed the avian acrobatic flying entertainment. The Cooper’s kept on flying around stirring up trouble. I started to walk to the east and just as I passed the southwest corner of the Visitor Center the Cooper’s Hawk came in and perched on the railing for the ramp to the front door. I was only 10-15 feet away so I slowly took out my camera and photographed the Cooper’s. It was a superb model who allowed me to take multiple photos without moving except for its head. I thanked the Cooper’s when finished.

My other hawk experience was in the Crabapple Collection with a Red-tailed Hawk yesterday. This hawk is one of the two that was born this spring over by Curtis Pond. I see one of them flying in among the crabapple trees quite often. It doesn’t seem to be bothered by people in general or me with my camera. It was flying from one crabapple tree to another searching for some varment to eat. I stood quietly taking photos as it move to different perches and even down to the ground toward the end. Again I thanked the Red-tailed for the show as it flew off.

Today started slowly but then picked up with a small flock of four Eastern Bluebirds flying in. I can hear their two-note call which is a signal to look for them. A little later a flock of ten flew over me calling. The presence of bluebirds is always special to me. I know they will be leaving soon and I will miss them.

As I walked down the trail in East Curtis Prairie toward Pond 2 I looked up to see what I thought was a pair of Canada Geese flying. I had already seen five or six flocks totaling over 100 and thought it’s only two more. But obediently, remembering the old saying I learned long ago, “bird every bird”, I looked at the pair flying over and to my surprise found that they were Tundra Swans not Canada Geese. I had seen a flock of 13, my first sighting of Tundra Swans for this fall, a few days before over Lake Monona so this was only my second sighting. More will arrive soon especially in November and December, so look for them in some of the larger lakes in Madison.

I walked around the southern end of Pond 2 and stopped at the boardwalk. Across from the step-up to the boardwalk I heard twittering in a European Alder. There was a small flock of eight Pine Siskin extracting the tiny seeds from the small pinecone-like female catkins of the alder. The male catkins for next year are the elongated, pinkish structures mixed in with the female catkins from this year.

Other sightings today include a Red-breasted Nuthatch in the pines across the road from west Curtis Prairie. There were still three Yellow-rumped Warblers down at Big Spring. One was finding food while walking on the floating algae/fungus mat on top of the outflow of the spring. I saw a Fox Sparrow looking for food in the mulch under a crabapple tree on Longenecker. Fox Sparrows are really good at uncovering food by jumping forward and back multiple times. Some of the other birds make this movement too but Fox Sparrows are the experts. The last two birds were both in crabapple trees. A Golden-crowned Kinglet was moving all over one tree looking for food and a Hermit Thrush flew up from the ground to perch in a crabapple tree so I could take a photo.

It’s time to start looking at the lakes in Madison for a variety of ducks. I saw several hundred Ruddy Ducks on Lake Wingra today and have seen many other species on other lakes. I’ve also begun seeing Common Loons.

To close I would like to suggest that you visit a website for writers and poets called Entropy. One of the birders in our Birding Group, Catherine Jagoe, has an article in Entropy about House Wrens that I enjoyed reading and thought members of our group would too. Here’s the link:

Good health and good birding to all, 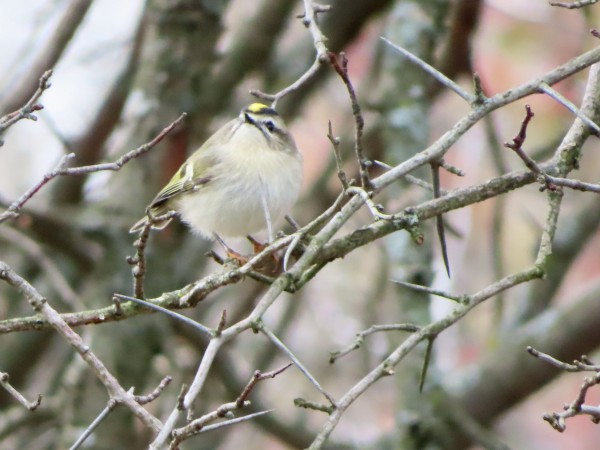 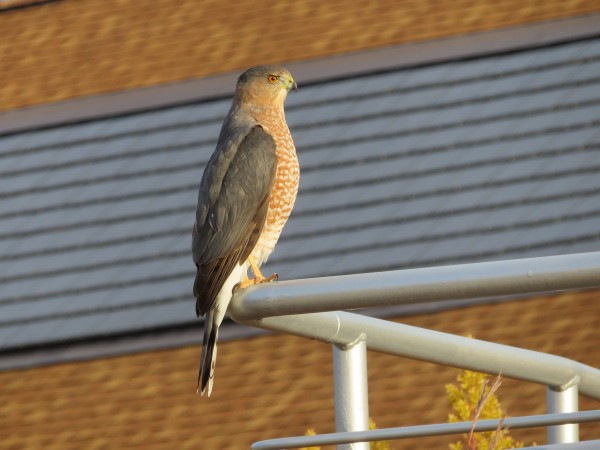 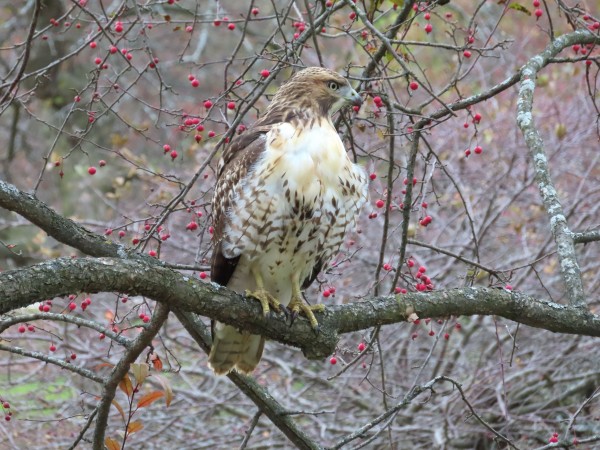 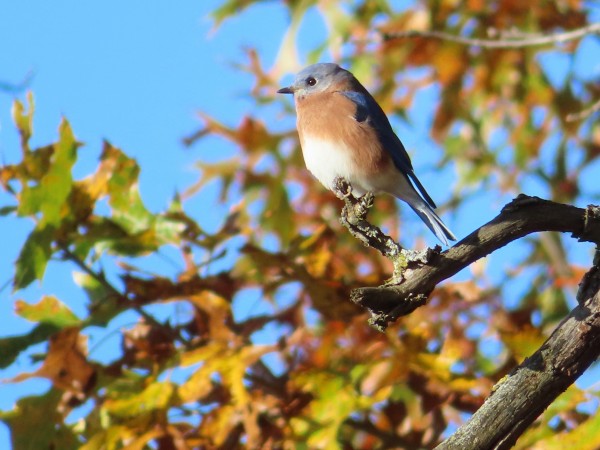 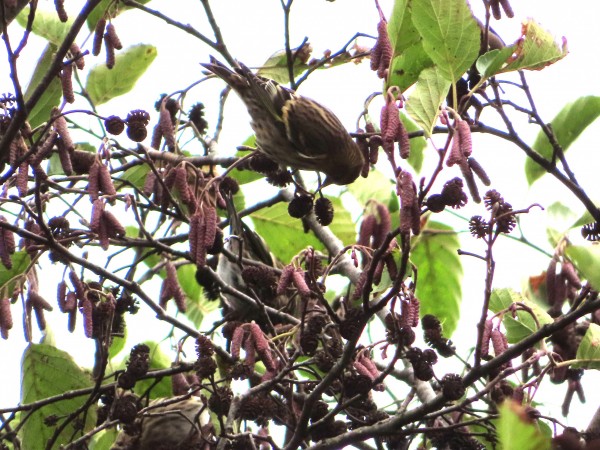 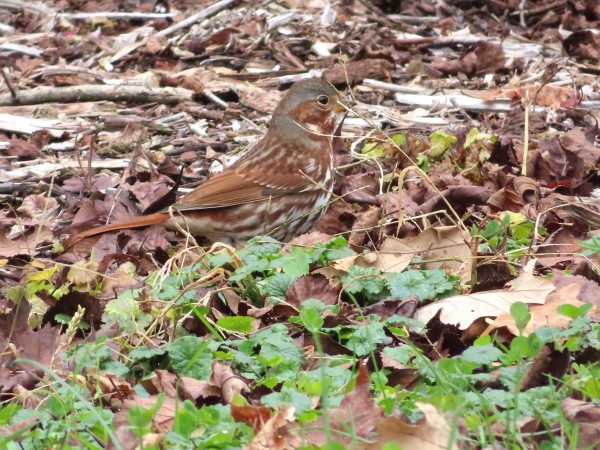 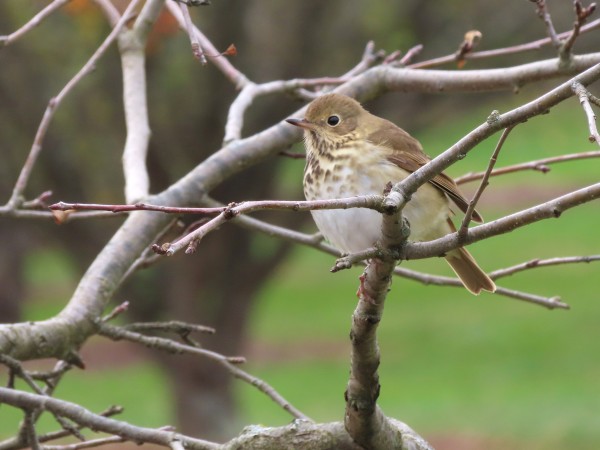 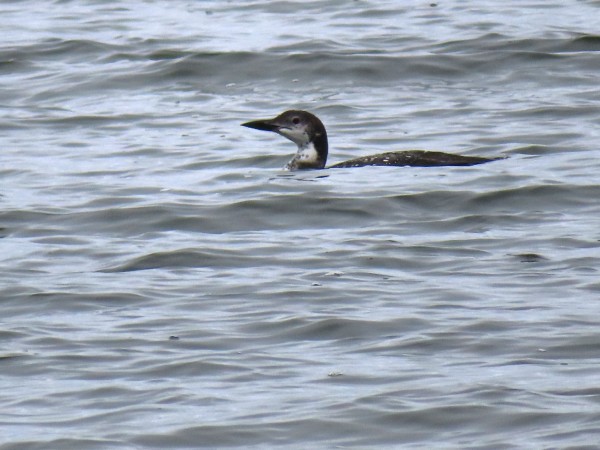