Again this past week the birding was another slow week. As I told you in last week’s report many of the smaller migrants have already left the Arboretum and many of the waterfowl have not migrated to Madison because they have not been pushed south by cold weather and freezing lakes up north. Nothing has changed.

My bird walk in the Arb today was a bit cold with a few snowflakes falling. It was also overcast with wind from the west. I did see two great birds today.  First there was a Great Blue Heron down at Big Springs. There’s usually at least one and sometimes two that stay in the Arb all winter. Once the lakes freeze over the only place where there is open water for the herons to fish and also stand in the shallow water overnight is in the outflows of the various springs around the Arboretum. Today the Great Blue Heron was standing in water at the far north end of the spring outflow and tucked behind some medium-sized bushes, probably buckthorn that hangs over the water. Look for it there all winter. The other great bird I saw was a Barred Owl perched high in a juniper on Juniper Knoll. I haven’t seen or heard a Barred Owl in the Arb for several months. In past winters a Barred Owl often perches in the junipers. As I walked by it the Barred Owl opened its eyes momentarily, gave me a two second look and then closed its eyes again totally undisturbed by my presence. During my whole photoshoot it slept. Listen for its “Who cooks for you” call in your neighborhood.

Speaking of owls there has been a Northern Saw-whet Owl in the pinetum (pines in the eastern part of Longenecker Gardens) for three or four days. It has mainly been heard at about 4:45 pm and once seen. Several of our birding group just happened to go to the pinetum on Sunday at the appointed time but the Saw-whet was a no show. We all hope the little owl, only 8 inches tall, is still around and will be refound.

There are still many birds feeding in the Crabapple Collection. The most numerous are the American Robins 30 or 40 of whom will stay all winter feeding on the crabapples and also turning over leaves around the springs to find other sources of food as well as good water for drinking and bathing. More and more Wild Turkeys are in the crabapple collection and they love crabapples too. I’m seeing 20 to 30 there each day. I’ve attached a photo of one male Wild Turkey that was feeding on the ground near the crabapple trees. If the sun is just right the turkey feathers display a variety of colors created by the molecular structure of their feathers that produce the fluorescence.

Starting now and lasting throughout the winter many of the birds of the Arboretum spend their days visiting the homes that surround the Arb. Many of the homes have feeders and the birds say why should I spend all my time trying to glean scarce food in the Arb prairies and woods when I can go to a feeder and find an absolute buffet of seeds and suet in one concentrated area. The Spring Trail Pond, affectionately called the Duck Pond, located just before Nakoma Rd. enters Monroe St. is a great example of what I’m talking about. Lots of little birds as well as ducks in and around the pond fly over Nakoma to raid the feeders. In addition some of the birds that would normally migrate south stay because of the great supply of food and water. It can be a good place to see Fox Sparrows, White-throated Sparrows, Red-winged Blackbirds and occasionally a different duck species besides the numerous Mallards.

A few duck species besides Mallards can be seen on Lake Wingra. A few can also be seen in the waters at the south end of Gardner Marsh. Right now there are a few Gadwalls and Ruddy Ducks. I’ve attached photos of both species.

Some of the birds that stay all year round are found in the Gallistel and Wingra Woods. They are the Downy Woodpeckers, the Hairy Woodpeckers and the White-breasted Nuthatches. The two woodpeckers are very similar but the Hairy is somewhat larger. The key in differentiating them is to look at the beak of each. In the Downy Woodpecker it takes two beak lengths to measure the head from front to back.  In the Hairy Woodpecker it takes about one beak length to measure the head from front to back. Most of the white and black patterns are similar in both species. Red on both species’ heads indicate males. Females lack any red. White-breasted Nuthatches crawl all over the trunks and branches of trees.

I’ve included another ice crystal photo but this time it incorporates some vegetation and an oak leaf too. 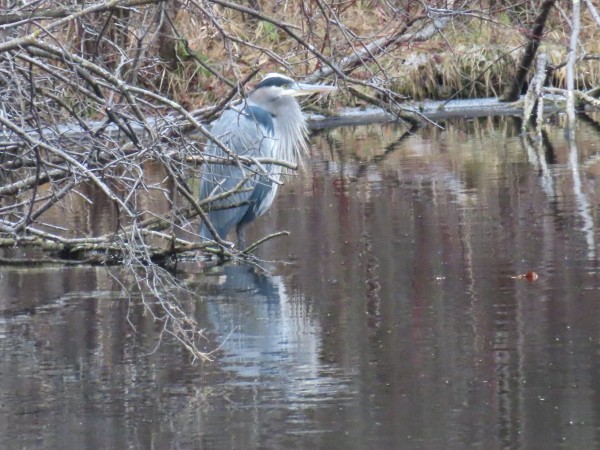 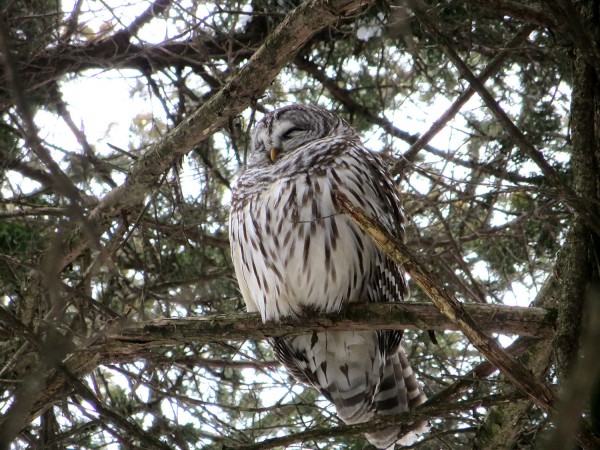 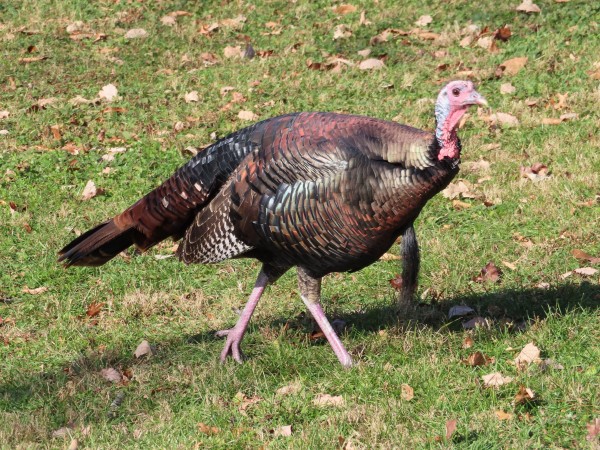 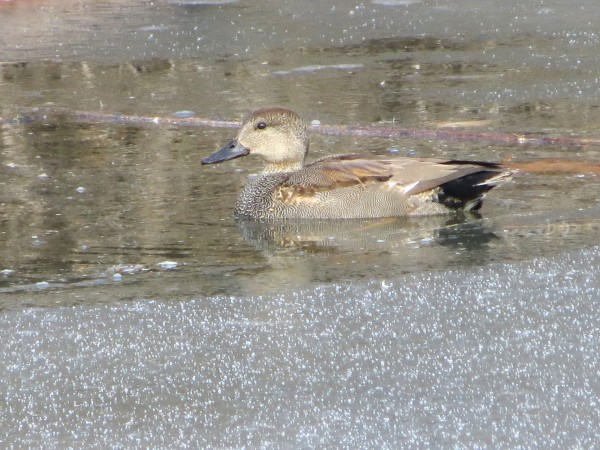 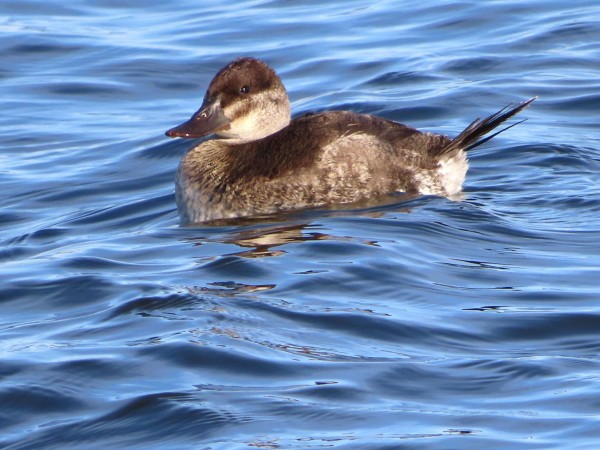 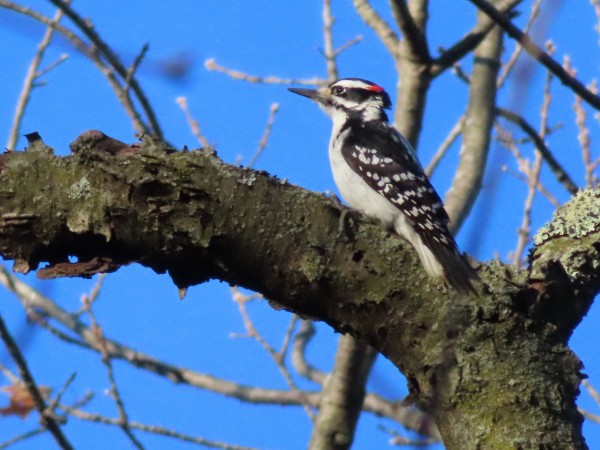 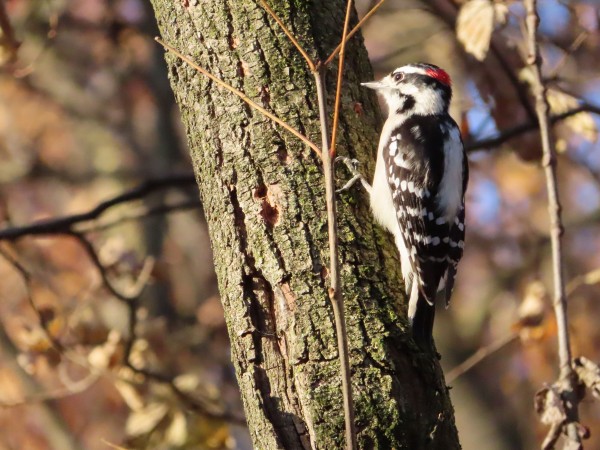 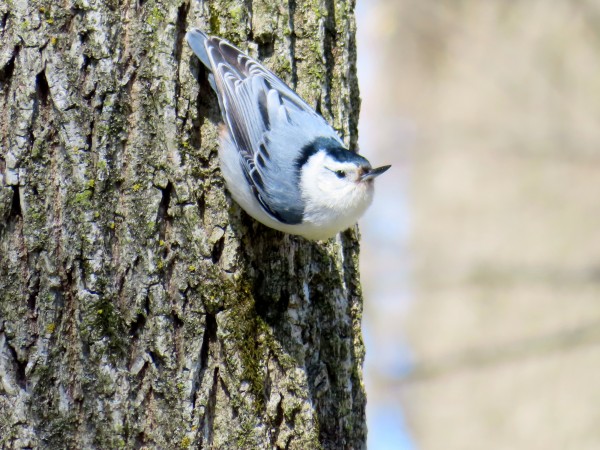 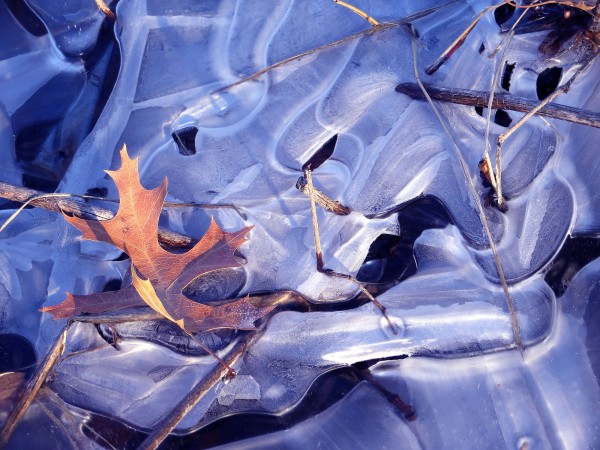