2020 is coming to an end in just a few days. I’m sure all of us will be glad to put that one behind us. Let’s hope the new year, 2021, will bring us some relief from Covid-19, the renewal of in person visits with family and friends and maybe even the return of our Tuesday morning bird walks.

Are there any birds left in the Arboretum in the middle of winter? Yes, but many are concentrated around the periphery where there are houses and bird feeders. The best place to find a good variety of species and also some species that normally migrate but stay for the great food is the Spring Trail Pond (aka the Duck Pond). The rarest bird right now is a western species, the Spotted Towhee. It is still here and was “spotted” today by one of our birders. And yes it still has many more spots than the more common Towhee for this area, the Eastern Towhee. Other migrants that stay are the Fox Sparrow, the White-throated Sparrow, the Great Blue Heron, the Belted Kingfisher and an occasional Red-winged Blackbird. So if you are looking for more variety in the winter try birding at the Spring Trail Pond. It’s also the place to be entertained by the Mallards that fly over the road, slightly higher than the roofs of passing cars, and land on the sidewalk on the other side. They then waddle up the sidewalk to turn right and enter the backyard of a generous corn-feeding owner. When full the Mallards make the return flight to the pond, quacking all the way. What fun!

On Christmas Day my wife and I were home alone and I’ll bet that was the fate of many other couples. I did something special that morning. I went birding in the Arb. Would there be any surprise gifts for me in the Arb? There were. First I saw the Great Blue Heron down at Big Springs. This year it has been standing in the water on the right at the end of the outflow. In past years it prefered the left side. Maybe it’s not the same heron that stays the winter. It usually tucks into some overhanging branches of the buckthorn to semi conceal itself so you need to look carefully to find it. Next at Icke Boardwalk I found five Cedar Waxwings at the top of a tree preening and joyfully warming themselves in the full sun. I hadn’t seen any Cedar Waxwings for a couple weeks. Also at Icke were Pine Siskins eating seeds from the female catkins of the European Alder. The female catkins look like miniature pine cones. Later I walked through the junipers on Juniper Knoll and found the Barred Owl. It has become a regular percher there in the past two weeks. It was also sunning itself to keep warm. It never gave me one open-eyed look but slept the whole time. Lastly I heard the loud calling and then saw the black and white bird with a prominent red crest, the Pileated Woodpecker, fly over me while I stood on the dock at Teal Pond. It’s such an effortless flyer. I can’t think of any better Christmas presents than seeing those five special species.

There are always Black-capped Chickadees throughout the Arboretum as well as at the perimeter. They are so cute and have so much energy. Another favorite is the Northern Cardinal. During one of our snow storms I was able to capture a photo of a male in a snow-flocked crabapple tree.

The last three bird photos were not taken in the Arboretum but are of species that can be found not far from the Arb. The first attached photo is of flying Tundra Swans. The Tundra Swans have finally arrived at University Bay about 2-3 miles north of the Arb. This past week the numbers have reached into the 500s and 600s. It’s fascinating to watch them fly in and land as if water skiing and then settle into the water. With large numbers the amount of hoo, hoo, hooing is music to my ears. It is also fun to watch them tip up, plunge their heads into the water and feed near the bottom. The second photo is of a Northern Pintail out in the Middleton business park area where there were 100s of Canada Geese and Mallards and one lonely Pintail. It’s such a stunning duck with a dark brown head and long neck, a white underside that sends a distinctive vertical white stripe up the side of the neck. The rest of the upper body is  covered by gray feathers with some with tan fringes. It’s tail is long and pointed. The last bird photo is of a Ring-necked Pheasant that I saw today while Levi Wood and I participated in the Baraboo Christmas Bird Count. If you take a ride in the country pheasants can be seen along roadsides or in fields most anywhere. The one I photographed raced with me along the roadside until it finally crossed the road right in front of me. The colors of the male Ring-necked Pheasant are magnificent.

The very last photo is of ice crystals and at the top is an egg-shaped bubble that appears to have an embryo developing within it. What does your imagination see?

I wish you the Happiest, Healthiest and Birdiest New Year ever, 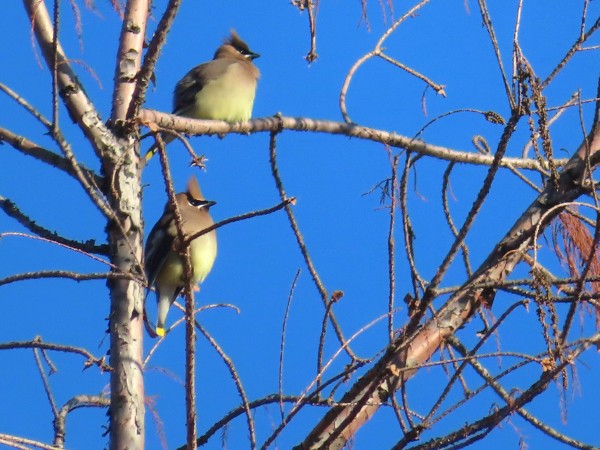 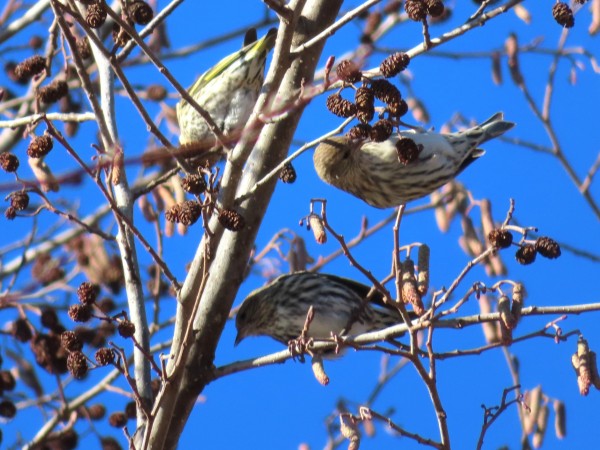 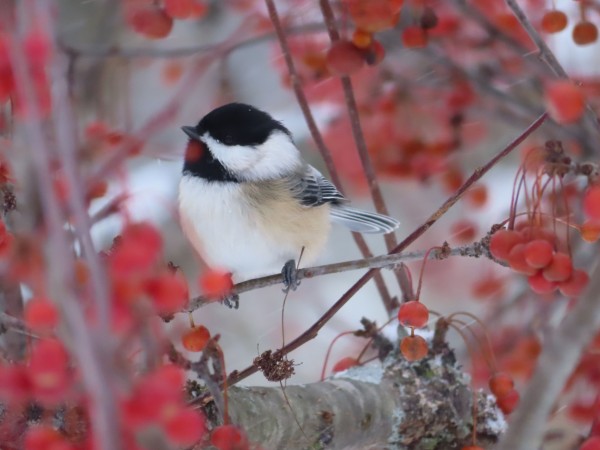 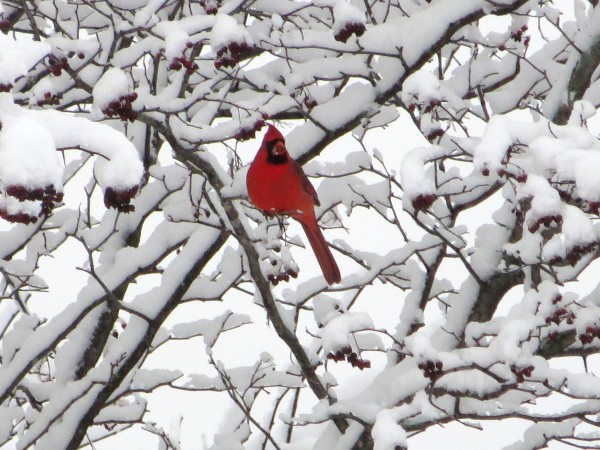 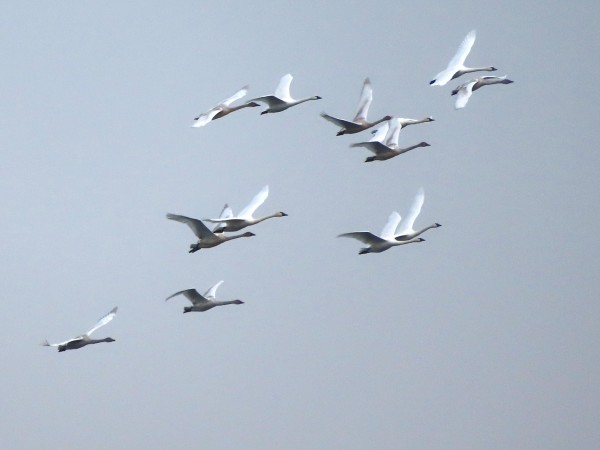 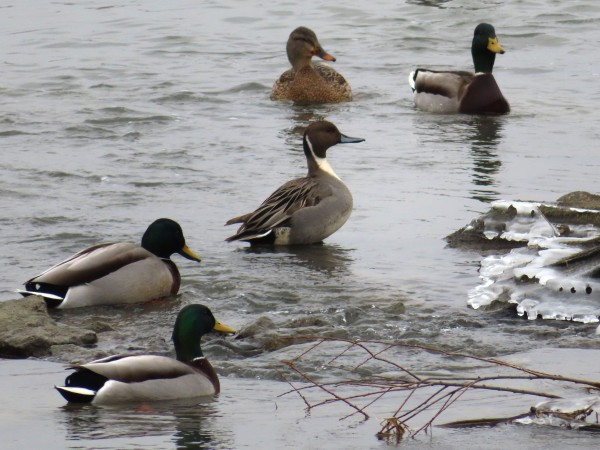 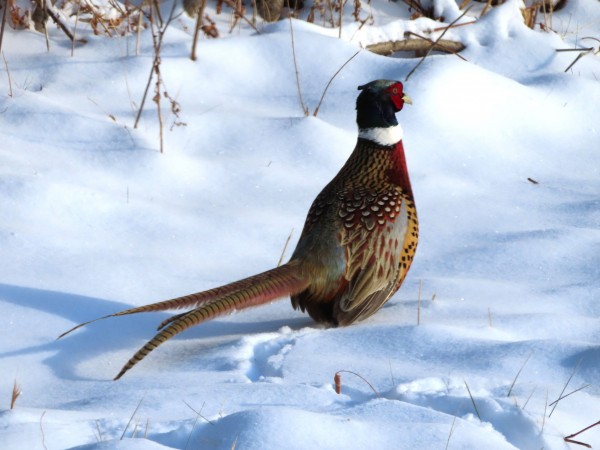 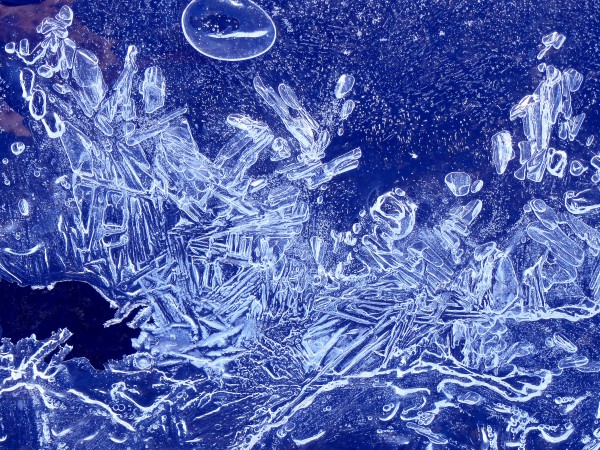