Q. How much do hummers weigh?
A. Male ruby-throats weigh 2.4 - 3.6 g, females 2.8 - 4.5 g. Male rufous hummers average 3.2 g, females 3.4 g. You could mail nine or ten hummingbirds with a single stamp, says hummingbird expert Laura Erickson! A hummingbird weighs about the same as a U.S. penny.

Q. Why are females larger than males?

A. Females are 15-20% larger. They need to be a tiny bit bigger to be able to produce eggs, to afford to share their body heat with the eggs while incubating, and to be able to share their food when feeding nestlings. Male hummingbirds are the tiniest warm-blooded animals on the planet.

Q. Why are they called hummingbirds?
A. That’s an easy one! Their wings beat so fast (in normal flight about 75 beats per second, and during courtship flights both ruby-throated and rufous hummingbird wings can beat 200 times per second!) that they make a humming sound.

Q. What do hummingbirds sound like?
A. Besides the humming of their wings, hummingbirds make chittering, chirpy sounds.

Q. How fast do hummers fly?
A. Ruby-throated hummingbirds have been clocked in a wind tunnel flying up to 27 m.p.h. One kept up with an automobile going 45 m.p.h.; another kept up with a car going 55 - 60 m.p.h.

Q. How does hovering help a hummingbird?

A. It can hover long enough to suck out all the nectar it needs from a flower.

Q. How smart are hummingbirds?

A. Hummingbirds are very intelligent, and are able to remember places and individual people from one year to the next.

Q. How do hummingbirds communicate?

A. They communicate with each other primarily by chittering and other vocalizations, and by flying toward one another aggressively, to chase each other away.

Q.Why do hummers have such brilliant iridescent throat feathers?

A. It’s only male hummers that have the brilliant iridescent throat feathers. They use these to display to one another. Females find it attractive, and other males are repelled. Male hummers are VERY feisty and territorial and constantly bickering with one another, and the red feathers are part of this territorial display. So they have two functions-attracting a female and defending their territory.

Q. What causes a hummer’s colors to have a metallic sheen?

A. The brilliant, iridescent colors of hummingbird plumage are caused by the refraction of incident light by the structures of certain feathers. Like any diffraction grating or prism, these structures split light into its component colors, and only certain frequencies are refracted back to your eyes. The apparent color of any particular part of a feather depends upon the distance between the microscopic ridges in its gridlike structure. The resulting colors are much more vivid and iridescent than those of birds with only pigmented feathers. Not all hummer colors are due to feather structure, however; the duller, rusty browns of Allen’s and Rufous Hummingbirds come from pigmentation. Iridescent hummingbird colors actually result from a combination of refraction and pigmentation, since the diffraction structures themselves are made of melanin, a pigment.

Q. Why are some hummingbirds all or partly white?

A. A very few hummingbirds are true or partial albinos. That means their feathers (and sometimes their whole bodies) have no pigment.

Q. What do hummingbirds look like when they’re flying?
A. Hummingbirds never stop beating their wings, and with their tiny size can look like large bumblebees in the air. They fly in a direct path unless they are making a male display flight. Displaying male ruby-throats fly in a wide arc—about 180 degrees, looking like a half-circle—swinging back and forth as if suspended at the end of a long wire. Their wings make a loud buzz at the bottom of the arc. Displaying rufous hummers trace a steep U, climbing high, diving steeply, and making whining and popping sounds at the bottom of the dive. Females sometimes join them.

Q. What is unusual about a hummingbird’s flying?

A. They can fly backwards and upside down and to hover. Few other birds can do any of these things, and none as successfully as the hummingbird.

Q. How can hummingbirds hover in one place?

A. When a bird flaps its wing forward it creates forces called ‘lift’ and ‘thrust’, which move the bird up and forward. Hummingbirds can rotate their wings backward, which creates downward ‘lift’ and backward ‘thrust’. By alternating flapping their wings forward and backward, the up and down forces and forward and back forces cancel each other out, so the hummingbird hovers in one place.

Q. How are ruby-throats and rufous hummer different from and similar to other hummingbirds?
A. These two species have wider ranges than other North American species, the ruby-throat predominating in the eastern half of the continent, the rufous in the western half. They’re smaller than many hummingbirds, though bigger than the tiniest.

Q. How is a hummingbird’s body adapted to its lifestyle and habitat?
A. The muscle fibers in hummingbird pectoral muscles are 100% of the red type (the opposite of the kind of muscle fibers in “white meat,” in chicken and turkey pectoral muscle). This enables hummingbirds to keep a rich supply of blood and oxygen flowing into their muscles as they fly, so they don’t tire even with their rapid wing rate. Their beaks are designed to probe into many species of small flowers and to snap up tiny flying insects; their tongue is fringed with tiny hairs and curls into a “double straw” shape in the back, allowing them to “wick up” nectar.

Q. I have never seen a Ruby-throated hummingbird on the ground. Do they ever land and if they do, can they wak around?
A. They do land on the ground occasionally, but aren’t capable of walking because their legs and feet are not very strong, and their legs aren’t in the best location relative to their center of gravity. They can hop a little, assisted by their wings.

Q. How do a hummer’s senses compare with a human’s?

A. Hummingbird vision is much more discriminating than ours—they can see things at a farther distance, and are able to see a wider spectrum of colors than we can, into the ultraviolet range. They are especially attracted to the color red. A hummer reacts to sights much more quickly than we can. A hummingbird’s hearing is more finely tuned than ours. It can hear higher-pitched sounds than we can, and can hear tiny differences in sound quality that our ears just simply can’t detect. It’s sense of touch is not as discriminating as ours in some ways, though it can construct a nest with amazing accuracy relying partly on this sense. Hummers can probably not taste as many flavors as we can, though they apparently notice exactly how sweet necar is, and prefer it very sweet. They probably cannot smell as many odors.

Q. What is the Ruby-throated’s scientific name? How is it classified?

•    Species colubris (which means “snake” in Latin—Linnaeus probably made a spelling error when he named it. The French colibre means “hummingbird”).    Q. What is the Rufous Hummingbird’s scientific name and how is it classified? 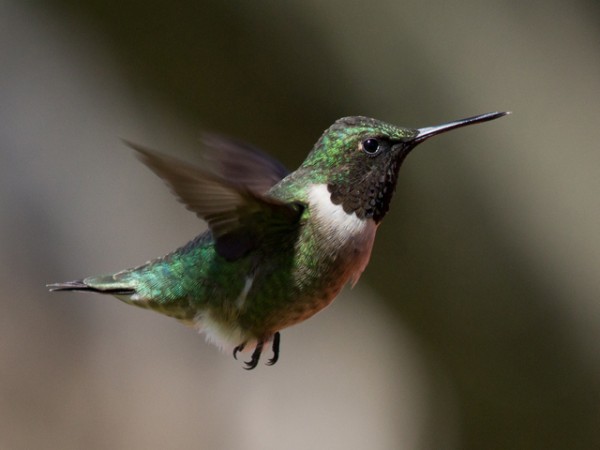