Q. Where do hummers spend the winter?
A. Ruby-throats winter in Central America from Mexico to Panama. At the northern extreme, a few rufous hummers winter in southern and coastal California and along the Gulf coast from southeastern Texas to Florida. Most winter in Mexico.

Q. Do hummingbirds migrate by day or night?
A. By day, except in one situation: when ruby-throated hummingbirds light out over the Gulf of Mexico, they are over water when night falls and must keep on going until the reach the other side.

Q. I love my Ruby-throated hummingbirds and I always worry about them during migration. Are there places where they can rest & refuel on their way over the ocean?
A: No. Flying nonstop across the Gulf of Mexico is an important part of the natural selection process that has made these little birds so tough, and not all of them pass this harshest of tests. Before leaving land, hummingbirds double their weight by gorging to add fat as an energy reserve; in good weather they can go 600 miles without stopping, and the crossing is only 500 miles. The ones that don’t add enough fat won’t make it, and their genes aren’t passed on; that’s how nature works. It’s just a bit more dramatic with hummingbirds, because they’re so small and we love them so much.

Q. How do hummers prepare for the journey north?
A. By putting on a lot of fat! They may double their body weight.

Q. How much do hummingbirds eat?
A. Hummingbirds are BIG eaters. No animal on earth has a faster metabolism-roughly 100 times that of an elephant. Hummingbirds burn food so fast they often eat 1.5 to 3 times their body weight in food per day! In order to gather enough nectar, hummingbirds must visit hundreds of flowers every day. Just one day of cold temperatures or bad luck finding flowers can mean death.

Q. What are a hummingbird’s enemies?
A. Predators such as crows, jays, roadrunners, cats, and mice all eat baby hummers. Hummers have also been caught by dragonflies and praying mantises, caught in spiders’ webs, snatched by frogs and fish, and stuck on thistles. Use binoculars to watch from a distance as much as possible so you don’t “tip off’ any predators.

Q. What happens if a hummer doesn’t have enough food?
A. To conserve energy, it can go into a sleep-like state known as “torpor.” During torpor, the tiny bird’s body temperature can drop by 50 degrees, the heart rate can slow from 500 beats per minute to fewer than 50, and breathing may even stop for a period of time. A hummingbird uses as much as 50 times for energy when awake than when torpid, but a torpid hummer can’t respond to emergencies.

Q. How long does it take for them to return to an active state from torpor?
A. It can take as long as an hour.

Q. What makes hummingbirds migrate?
A. Hummingbirds migrate in response to hormonal changes that are triggered by changing length of daylight. Nothing people can do will make them stay too long in fall, so it’s not necessary to stop feeding them to force them to go south.

Q. Do males or females return first to the breeding grounds?
A. Males. Females follow a few days to a couple of weeks or so behind them.

Q. What do hummingbirds eat when getting ready for their migration?
A. LOTS of nectar and insects.

Q. How do scientists learn where hummingbirds from one state/province migrate for the winter?
A. Scientists study bird banding data in hopes of learning where hummers go. They put thousands of numbered bands on hummer legs, but very few hummingbird banders have ever found out what happens to birds they’ve banded. It takes a long time to amass enough data for them to draw accurate conclusions. Meanwhile, hummers may change some of their migration patterns, making the research even more complicated.

Q. Will keeping feeders up prevent hummingbirds from migrating on time?
A. No. The birds have an instinct to move with the maximum availability of natural food. The feeders do not entice them. If migrating birds could be easily enticed to stay for food, none of them would get anywhere because they would have the maximum food available right up until fall’s first killing frost—when it would be too late for so many hummingbirds to be moving. Migration is an innate or instinctive behavior. Any hummingbirds that are stragglers are just not in condition to move when they should. They need your feeders in order to have the best chance at catching up. Keep your feeders up, clean and filled at least two weeks after you see your last hummingbird in order to help those stragglers.

Q. Do hummingbirds travel together when they migrate?
A. No, hummers are solitary migrants. However, when many are on the move in a good migratory pathway, you may see many in a day—just like human commuters may be traveling mostly alone, but there can still be a LOT of cars on a highway at rush hour! For example: Because so many of them are migrating during August/September, when there are a lot of days with rain and/or unfavorable winds, any day with good conditions means a lot of hummingbirds will be on the move.

Q. What might be some advantages for hummingbirds to migrate alone?
A. Each hummer must stop fairly frequently to feed, and since only one can feed at a flower at a time, it’s easier for them if they don’t have to be waiting for one another. Also, they have no real advantages to flocking—they’re so tiny that the eddies of air current their flight produces break up by the tiniest breeze, so others can’t follow in their wake, and they are so tiny that most predators ignore them, so they get no added security from more eyes to spot predators.

Q. How long does hummer migration take?
A. Most Ruby-throated Hummingbirds only migrate as far as Panama. To go from Vermont down to the Gulf coast of the United States would take about 5 days, assuming the hummer did not spend more than one day resting at any one place. To cross the Gulf of Mexico takes 18 hours if the weather is good, 24 hours if the weather is bad, so adds another day. It would then take another couple of days to reach its destination in Central America. So, with no big rest stops, it would take a hummingbird about a week to reach its wintering grounds. In reality, it takes about 2 weeks, since they do spend time at various places feeding, resting, and waiting for good weather. Spring migration can be faster if the weather if favorable, because hormones are making the birds more restless so they can start the nesting cycle.

Q. When do the hummingbirds arrive on their breeding grounds?
A. Usually as sapsucker holes or flowering plants are first opening.

Q. What do hummers do first when they return in the spring?
A. After fattening up, males start chasing away other hummers and doing their flight display, in order to attract a female to their territory. Females fatten up and then start nesting.

Q. Do hummingbirds migrate on the backs of geese?
A. No, hummers are fully capable of traveling astounding distances on their own wings; many experts support the idea that many ruby-throats fly non-stop across the Gulf of Mexico at least once a year.

Q. What are some of the hazards that hummingbirds face on their long migrations?
A. Lack of food, windows, unexpected predators (hummers nesting in far northern forests may never have seen a snake in a tree before they reach the South, for example), getting caught in storms without shelter.

Q. How do we participate in the Journey North Hummingbird Migration Study?
A. Report the FIRST hummingbird you see in the spring. Also, report “leaf-out” of your trees. For many small bird species, the timing of spring migration may be related to leaf-out. This is because when leaves emerge, so do lots of insects. Insectivorous birds may fuel their migration by following the leaf-out, and eating the millions of insects available at that time. With your help, we’d like to explore how these spring events are inter-related.

Q. What is the range of the ruby-throated hummingbird?
A. Ruby-throated breed over much of eastern North America.

Q. What is the ruby-throated hummingbird’s habitat?
A. Ruby-throated hummingbirds can be found in many habitats, from forest to streamside. The one thing they always need is nectar or another very sweet liquid. In early spring they find it at sapsucker drill holes—otherwise they are virtually always found near flowering plants. 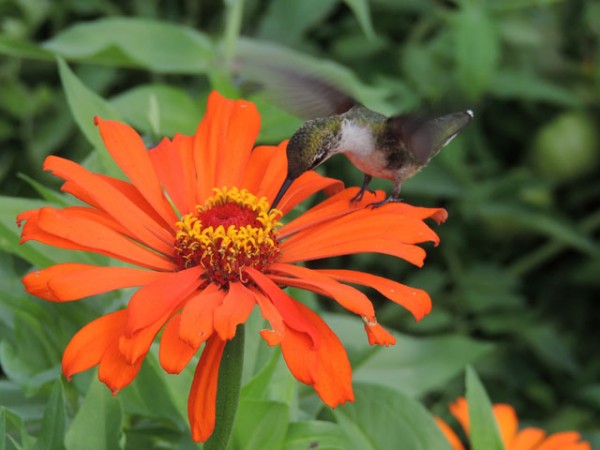