Visitors and nearby residents are enjoying observing the surprising increase in monarchs this season at overwintering sites throughout California. A few intense rainstorms blew through the area recently but the monarch population appears to be weathering them well so far. Meanwhile small pockets of monarchs are also present in southern California and the deserts of Arizona this winter as well, a harbinger of the season.

As 2022 dawns we start with a new slate of maps to enter your monarch and milkweed sightings. Your monarch observations are valuable! Why milkweed? It’s helpful to know where milkweed is still available each winter for monarchs.  Following the monarch trail helps us all learn about their survival strategies in winter. Keep your camera or phone handy!

Rhonda in Wickenburg, Arizona, spotted one monarch on January 4. “Flying through campus.”

Pam in Florence, Arizona, reported 2 monarchs on January 5. “Saw one a few days ago but saw 2 on a bush with trumpet flowers.”

James in Green Valley, Arizona, found one monarch on January 6. “I observed one fast moving female monarch which appeared to be in great shape at 1:20 pm MST, 71 degrees and sunny, no breeze. She fluttered around my purple lantana w/out nectaring. Then she bounced on several leaves of my A. angustifolia but did not oviposit. She came back several times in 5 minutes and gone. Could not get a picture.”

In addition to the annual Thanksgiving Count as a point of comparison in California overwintering monarchs, volunteers are also just completing their New Year’s Count. The numbers provide a snapshot of the stressors of overwintering as a monarch. Monarch numbers typically decline as the winter season progresses. In fact, the monarch population is normally at its lowest ebb just before the Spring migration begins. Lipid levels can be reduced if nearby nectar resources aren’t available nearby to easily access on warm, sunny days. The hardship of the fall migration itself can take a toll as can weather-related stressors such as storms with strong winds. Breeding monarchs in the area will also reach the end of their lifespan. Usually, the New Year’s Count results in lower numbers than the Thanksgiving Count. We are all waiting to see the results of these two major counts as soon as they are tabulated by the Xerces Society.

Many sites also host weekly counts to see the smaller incremental changes in the monarch population or movement at specific locations. Early in December Pacific Grove Museum’s Stephanie Turcotte counted Dec 17 was 11, 954 after a three-day storm event. Many monarchs survived, and some moved to different trees. There were also some casualties. On Friday, January 7, Stephanie reported, “Our count in Pacific Grove this morning was 9,511! They have moved up higher in several of the Monterey Pines where they were earlier in the season, as well as some pines where they were not previously. This included an approx.125 live monarchs on the ground, trying to dry themselves. They were also active earlier than previous weeks, despite temps being 48 degrees when we began counting at 7:15am.”

Diana Magor has been watching the monarchs in Santa Cruz, California. “I went with friends to see and do a rough count of monarchs at Lighthouse Field. I estimated about 700 at LF at noon on Dec 26. Most were on the south facing cypress tree just starting to open their wings as the sun was out and the temp warming. It warmed to over 55F and some started flying, but usually just short flights to different basking spots.”

“At Natural Bridges, we saw very few clusters…only 1 with 25 adults. Many were flying very high up above the Eucalyptus over the main viewing area. Staff said they were nectaring up there (presumably on Eucalyptus flowers). However, we spotted only about 70 flying and a few in the high leafy parts of the trees, but not in clusters, so perhaps 100. However, we could not see the tops of the trees, so there may have been many more. There were no staff down at the viewing area for updates. It appears to me that some may have moved to Lighthouse Field or perhaps Moran Lake, though I didn’t visit Moran Lake. My ‘preferred’ survey spot is Lighthouse Field. John Dayton says that a move from Nat Br to Lighthouse is normal late in the overwintering period.”

On December 27th Diana went out again. “Here are a couple of photos of monarch’s basking in the sun on Monday, Dec 27 at 3:37 at Lighthouse Field. I counted 635 there yesterday. A few were flying, and I’m sure I missed a few as well, but these numbers were verified from my photos.”

“Saw very few at Natural Bridges on Sunday, but they were flying very high above the trees and very few clusters noted. Some may have moved to Natural Bridges, which is not uncommon. You may notice that several are still hanging under the cypress branches, wings closed, which is their normal behavior during cold rainy days (which we’ve been having). That protects them from the rain and cold frost if it comes. I just caught some of them opening their wings and basking in a little sunshine! It was warm enough to fly, and several did.”

“We’ve had lots of rain and snow as I’m sure you’ve heard, and we’re all so happy about that! We’re hoping for an end to the drought, or at least a significant dent in it!” We’ll look forward to Diana’s updates as they come in.

This year with its exciting western monarch numbers, their locations become extremely important! If you are seeing monarchs, be sure to report to Journey North whether they are adults or if you see eggs or larvae as well. Provide as much information as you can such as weather conditions (it’s okay to estimate). Your detailed description of what you see can include, but is not limited to, the monarch’s gender or activity and, if known, the type of flowers if they are nectaring. If you can, observe the condition of the wings – are they fresh and new or worn and tattered or something in between – helps us learn more about monarch age and survival. We realize it isn’t always possible, but please take a photo if you can. Thanks so much for your help. 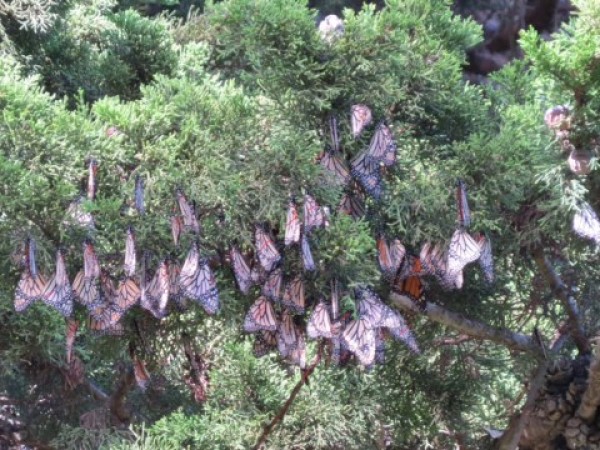 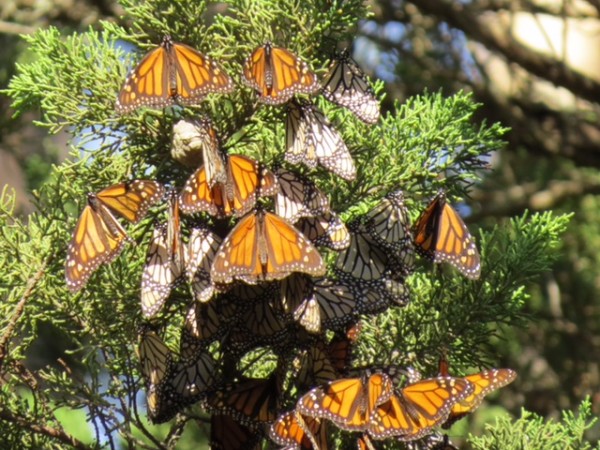 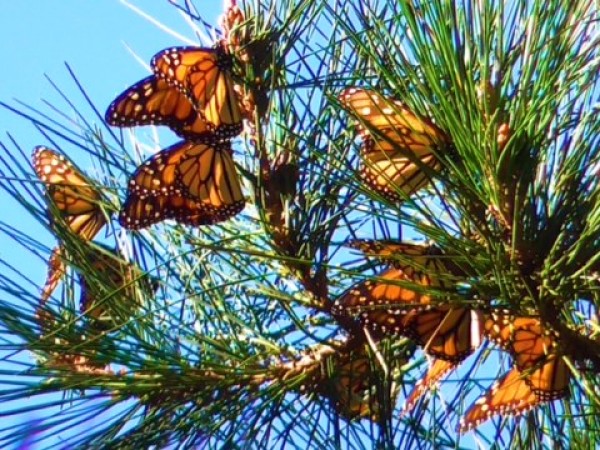 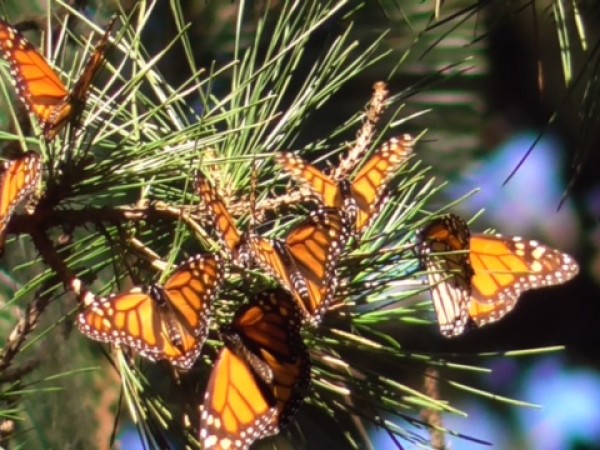 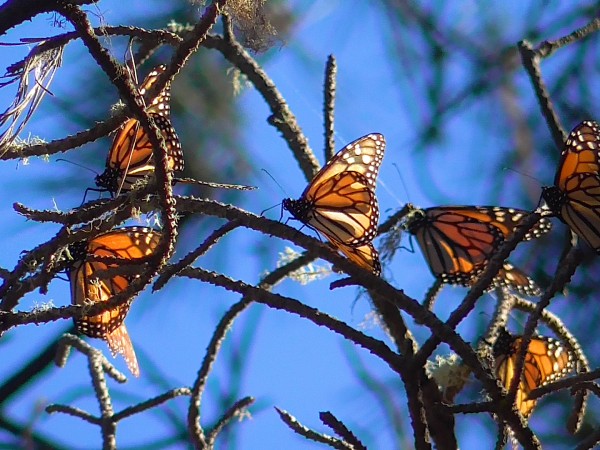 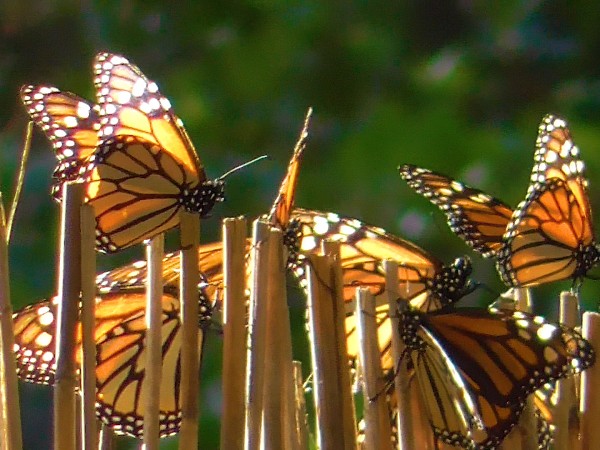 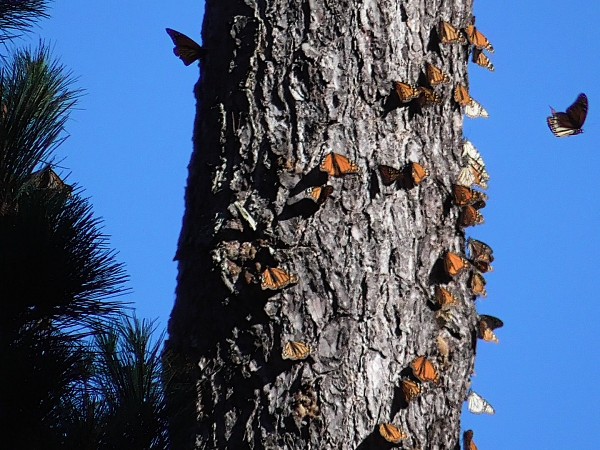 Monarchs Grace the Trunks of Trees 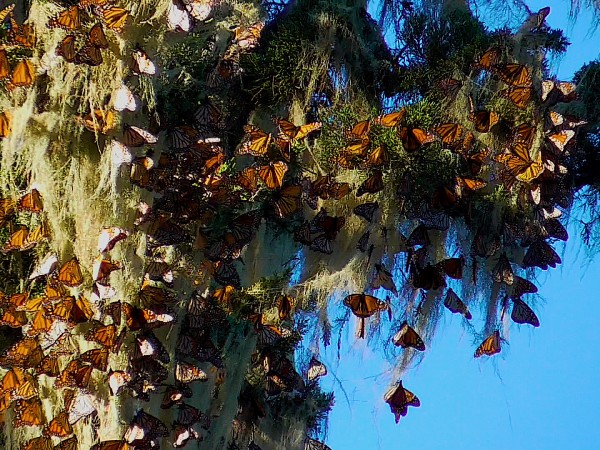 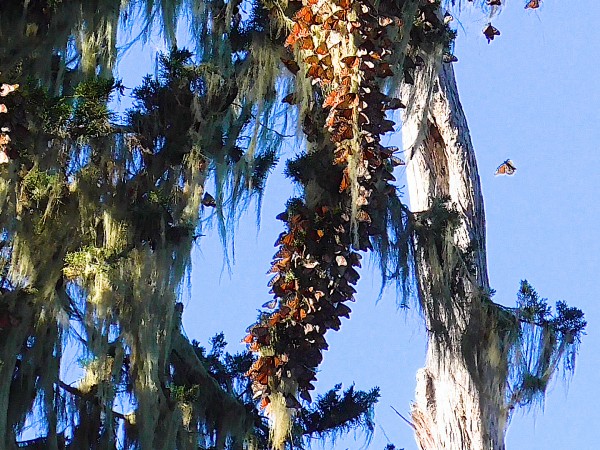 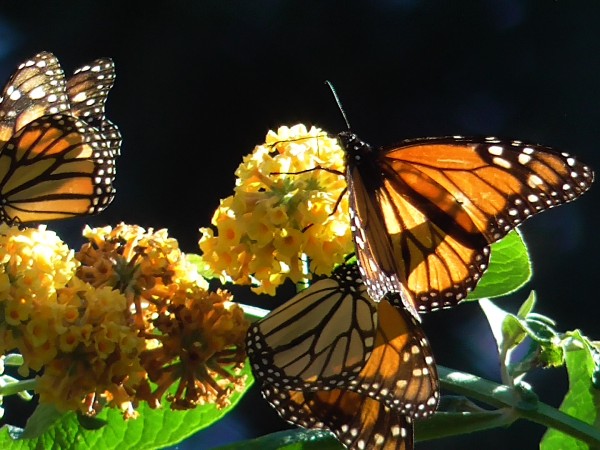