Monarch reports this week reveal larger numbers of monarchs rather than only singletons of earlier years. Southern California sightings include 50 and even 100 monarchs flying in nearby trees and nectaring on flowers. Warmer temperatures are making monarchs more active as well creating “waterfalls of monarchs” further north in Pacific Grove!

Significantly more monarchs were reported mainly in coastal California and the deserts of Arizona this week:

Christine spotted 50 monarchs in Huntington Beach, California on January 21. “By 10 am the sun finally hit the top of the Eucalyptus trees and the butterflies started fluttering. No sheets of butterflies were visible that I could find.” Be sure to see her airborne monarch photo.

Joyce found a number of monarchs in Mountain View, California, on January 24. “Saw 8 Monarchs at Google today. Most flying around enjoying the sun. This one nectaring on Sea Lavender. Calm, sunny day in the mid 60’s.” Further south, Linda reported 100 monarchs in Los Angeles, California on the same day. “The Getty Villa had adult Monarchs throughout the outdoor spaces.”

Patty in Tempe, Arizona, spotted a tagged monarch in her yard. “I saw an adult male Monarch with a blue tag flying around my yard near the Desert Milkweed but I could not catch him. It may have been a male I tagged on Dec. 14th and recaptured on Jan. 15th with the tag from Southwest Monarch Study of BU422 . Today is a nice sunny 64 degree day with wind at 4 mph from the South.” The Southwest Monarch study is researching winter monarchs in Arizona including tagging to monitor their movements.

On January 25, John in Cambria, California, reported, “One more adult appeared just after I submitted my previous report. Now appear to be two adults mating?” On the same day Susan saw three monarchs in El Segundo, California. “2 flying, one open wing, resting in a pine tree around 11 am.”

The next day, Don found two monarchs in Los Angeles on January 26. “Two spotted flying by. Photo shows one of them.”

Notes from the California Overwinterng Sites

Stephanie Turcotte is seeing a change in monarch behavior at the Monarch Butterfly Sanctuary.

“I will try to make it brief, but there is so much going on in the grove right now.”

“There has been another dynamic and impressionable shift in movement in the grove since we last counted on 1/22/2022.  The temperatures in the last two weeks have been very warm, mid to high 60’s. The monarchs are now up high the tallest parts of the Monterey pines and the Monterey Cypress trees, spread across their canopies. They are clustered in the north eastern part of the habitat on trees on which they have never been before, but that generations before have also gone in this later part of the season. Their pattern of movement, from the beginning to the end of the season, often mimics their predecessors. This is fascinating.”

“And because the temperatures are so warm, so early in the day, we see waterfalls of monarchs leaving the clusters and taking to the sky. There is plenty of activity to observe. Many of them land in south facing trees at the lower end of the grove, at the southwest end of the sanctuary, to gather the warmth of the sun. They are on the ground drinking dew collected on the sour sop, miner’s lettuce, clover and other plants There are early courtship rituals being displayed as well. Yesterday a crowd gathered around as I explained that the two joined monarchs were not in trouble nor hurting each other, but that the male was attempting to clasp onto the female as part of the mating ritual. This male monarch had about 90% of both right wings missing. The attempt failed but we all watched as this male was still able to fly off, although not so easily, with his heavily damaged wings. There are also plenty of monarchs utilizing the nectar beds, mostly on the yellow flowers of the butterfly bush and the red flowers of the bottle brush.”

“We will try our best to get a count on Friday, February 4th.”

“The monarchs are definitely mating frequently. Both John Dayton and I have observed mating over the last 2 weeks.”

“John Dayton said the numbers seem to be increasing at Natural Bridges State Park, which may account for the declines at both LF and possibly Moran Lake. John’s counts at LF are generally higher, but the Santa Cruz area monarchs seem to move about quite a lot. John says this is normal. The clusters at LF get a lot more sun and heat than at NB, (which is ~5-8F cooler) and the habitat, as you have seen, is completely different. John says estimating #s at NB is very challenging, since the clusters move around within the site a lot, and that they are often very high up in the trees, or densely clustered. It’s also cold and dark there, and there are almost always many people walking on the boardwalk, so it moves making it hard to focus on a cluster. However, he’s the most experienced monarch counter I know.”

“Most of the remaining monarchs are males, but there are still some females at the site. John says this is normal. They are, however, leaving earlier each year that I have been observing.”

On Sunday Diana returned to both sites:

“Checked LHF [Lighthouse Field] this a.m. and found 160 monarchs, all clustered, there. It was cold, low 40s, sunny, but the sun had not reached clusters yet. 5 clusters: no activity. 3 on S side on normal 3 cypress branches. 2 on the NW side on 1 cypress branch. Total: 174 monarchs.”

“Natural Bridges State Park: At least 300, several clusters, but I have to review my photos. Very dark, hard to count.”

A special “Thank You” Diana Magor, Robert Pacelli, and Stephanie Turcotte, for their detailed reports and photographs as well as everyone else who submitted sightings this week. 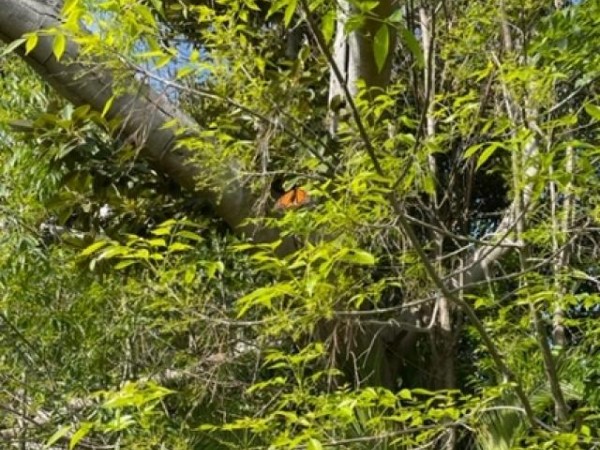 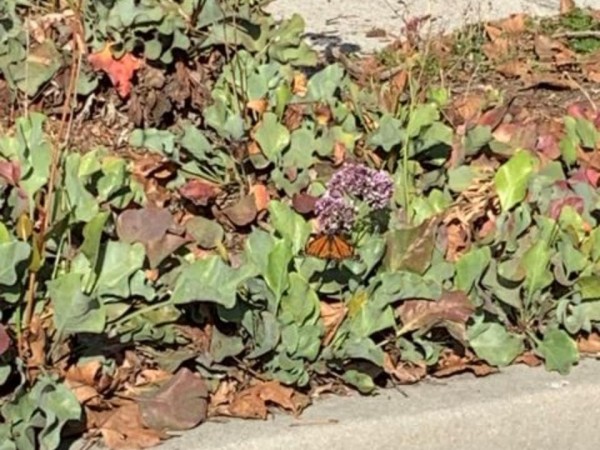 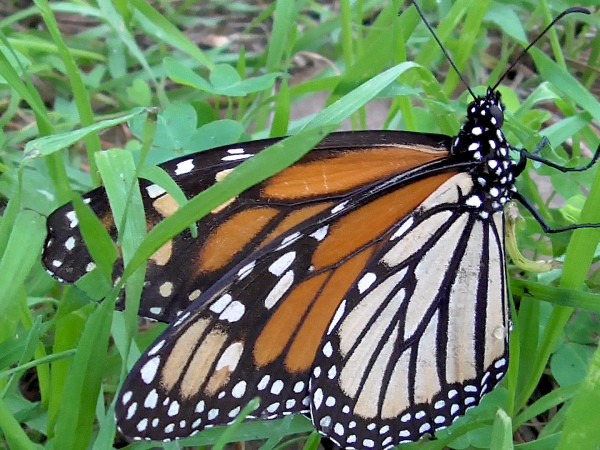 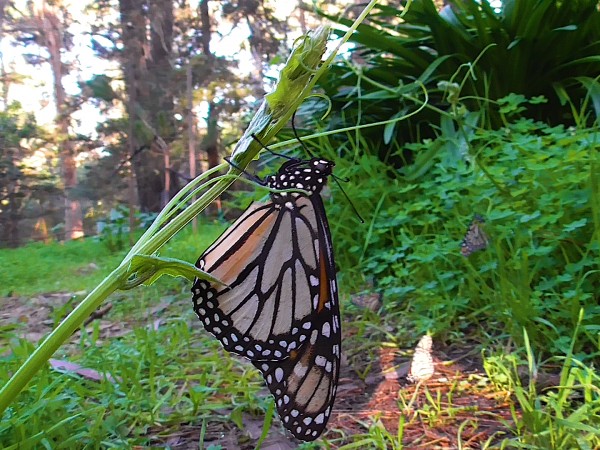 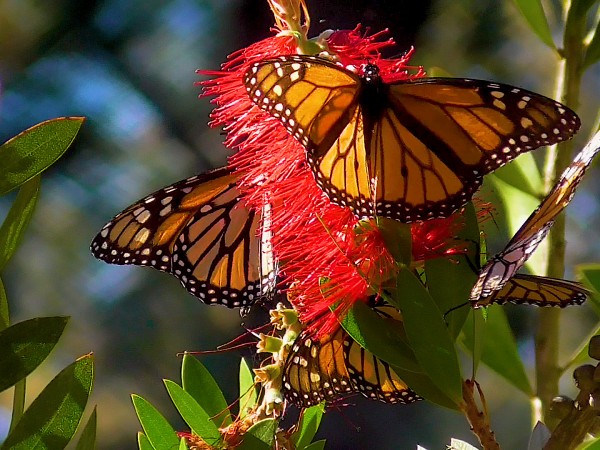