Where did they come from? Where will they go?

As Western monarchs slowly leave the safety of their groves along the California coast on their spring migration, where will they go? Knowing where they came from may give us a clue. Let’s look where monarchs tagged by citizen scientists in the West were spotted at the California overwintering sites.

In the West, every fall trained citizen scientists participate in tagging monarchs in three regions led by three organizations: Monarch Butterflies of the Pacific Northwest, Monarch Alert and the Southwest Monarch Study. The recovery maps (at right) show the flights of monarchs as straight lines but these lines are representational; the lines should not to be viewed as exact routes. We can learn where monarch butterflies started their migration and where they ended their flight at overwintering grounds.

Isotope studies by researchers show many monarchs at the California overwintering sites are from California, but other studies indicate that monarchs migrate from locations around the West. Through tagging in the Pacific Northwest, monarchs appear to migrate primarily to locations north of Goleta Butterfly Grove (Ellwood Main) in the Sperling Preserve on the Ellwood Mesa in Goleta, California as well as nearby locations along the California Coast. Citizen scientists in the Southwest meanwhile have their tagged monarchs spotted as far north as Pacific Grove, California. But not all monarchs in the west migrate to California. Almost equal numbers of monarchs tagged in Arizona migrate to both California and Mexico.

Where will monarchs migrate in spring? Through tagging, we have learned that monarchs from throughout the West overlap in the overwintering region in California indicated in yellow on the map at right. Many questions remain. Could this be a significant area where monarchs from different locations in the West genetically mix as they breed in the Spring? Could monarchs from the Southwest migrate North and East from these locations? Where do you think they will go? 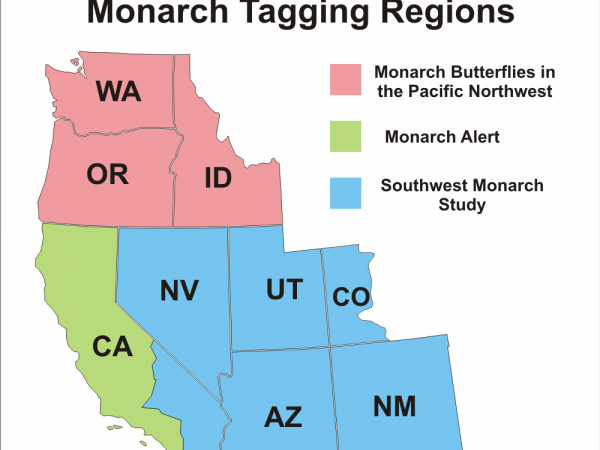 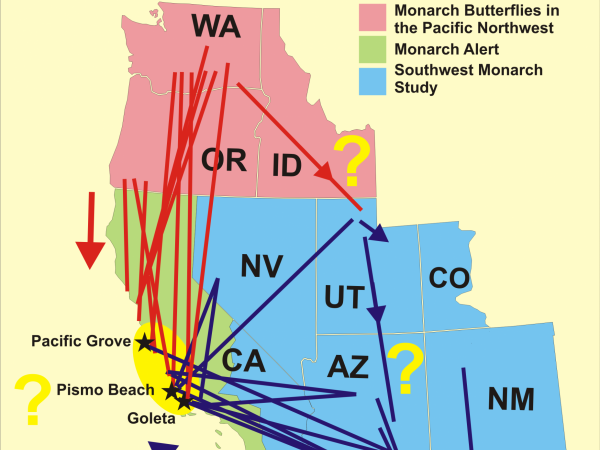 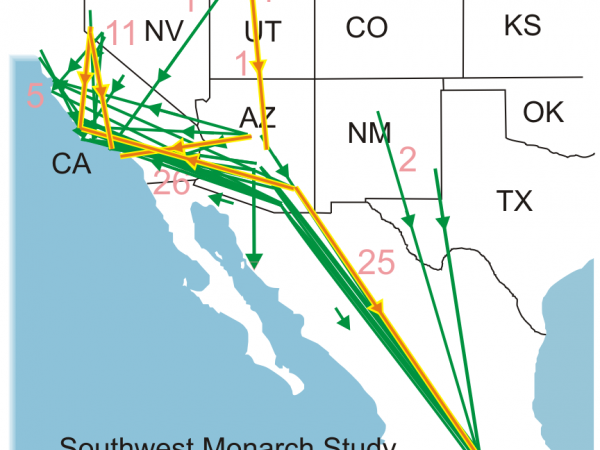