Throughout the week, streams of butterflies have been coming down the mountain and passing along Angangueo in a clear northern direction. The waves come intermittently, from around 9-10 in the morning to the early afternoon every day. Indeed as they pass they are announcing the closing of the season. I was prepared to observe, for sure, trees lightly dressed in orange and at the most, some scattered tiny clusters here and there. On driving up to El Rosario Sanctuary this Monday morning, as I went

up to the colony and approached the main spot, guides announced Monarchs had relocated going back to the very near, eastern-forest area right beside and only a few meters inside from open meadow area where they had been staying for weeks now between the  “Llano Cruzado” and the “Barranca Honda” sites.

Coming closer to the site became more and more a spectacle, since Monarchs could be found either flying around in a harmonious but hurrying way, streaming down here and there inside the forest.

But the best…oh, my gosh, mating was now everywhere! Every meter after meter Monarch couples seem unstoppable. Males and females are really crazy at each other. This is what we locals were waiting for during the last days to see and now it has been happening for days. Strong male Monarchs land like bats on the strong females and mate vigorously. Both male and female really look very healthy and strong to mate and make it north. BRAVOOO, HURRRAAAH!

There I went with a few visitors more coming to the main spot.  Suddenly, a few guides were seen a the short distance extremely quiet and silently sitting around which felt suspicious. A few steps more, Monarchs… mating… flying… streaming amidst a total silence… and… all of a sudden,  at turning our heads into a group of some Oyamel trees surrounded by heavy canopy as if hidden for self-protection and quietness…ohhh! One could hear the low exclamations of surprise in every one - surprising… magnificent… 4-6 trees with really heavy, dare I say even huge heavy clusters, hanging from every tree covered maybe from bottom to top…oh, no, I just could not believe my eyes!

Just previous to the final massive leaving, this might be the last massive concentration seen in such wonderful clusters, not common at this rather very late time in former years.

For how many days more will they continue at their Sanctuary, we do not know. The leaving of Monarchs has been taking now days and days and it has been gradual and varying  in quantities from El Rosario. Their passing incessantly through Angangueo since last Monday is now is a real spectacle as children, youngsters, adults and visitors keep contemplating the wonderful flight North.

The two sanctuaries present quite a contrast as the season closes. In contrast to El Rosario, Sierra Chincua Sanctuary now gets quieter and quieter, since Monarchs surprisingly left massively one week ago now as announced by local guides then.

Scarce visitors come now to the Sanctuary deciding to enjoy the beautiful nature of it, no matter that Monarchs have left.

Ejidatario families now sit here and there, women doing their beautiful embroideries and men getting together to feed-back themselves on the activity of the season and the aspects to improve in the different services offered to visitors for next season.

Raúl and José sit down happily and welcome everyone assuring that the nature of the area is superb and that it should be visited all over the year starting right now so many tourists and visitors coming to live the old, traditional Easter time celebrations in Angangueo just coming next!

Ambrosio and me, (he is my young Journey North student in former years and guide today, 12 years old now and attending first year of middle school), go into the forest as he tells me:

“I will take you to see the cemetery of the Monarchs, Estelita;  this is all what is remaining now;  they left so suddenly and rather soon;  last week this time they were still here and we were all so happy… now we are all so sad; our grand-parents should now organize for reforestation in the summer but meanwhile, our fathers should leave now to the nearest cities to look for a job while the next season comes again; our moms should close their kitchens at the sanctuary and go home to care on us children and to anxiously wait for the season again… we are so happy every season coming with them to learn to be guides, to care of our forests, to learn more on the names of plans and animals, to play when there are no tourists during week days, to eat the same delicious dishes moms and grandma’s prepare for tourists ,” he sighed.

Once there at the bottom of the great rock/boulder, right below “La Cabaña” site, this seems indeed to have been one of the very last main sites occupied by Monarchs before their final leaving.  The perishing and predation is really evident and abundant. Trees all around are back to bright green as if assuring visitors there are not more Monarchs hidden anywhere in the forest anymore.

The beautiful chipping of hummingbirds, the varied magical songs of different kinds of beautiful local birds and even the far, lonely crawling of crows amidst the silent magical, lonely forest make us both, Ambrosio and me, silently sit down at our enjoyment, each one at his favorite spot, and while Ambrosio contemplates the treasure to which he should be a proud heir, I take my time to pray my inner farewell to Monarchs and my spiritual act to thank for the divine equilibrium of Universe, to thank for plant, animal and human life in it and to thank nature and Monarchs for having been with us once again this season, letting us see how tiny a part off it we humans are and how much in debt we humans are to nature.

Ejidatario families at Sierra Chincua admit that, as official numbers just revealed, Monarchs were not higher in number this year, but on the contrary, slightly lower;  they assure Monarchs’ mating was presenting a good activity during the last days anyway;  “We know that the climate change and many other aspects are really determining their staying at their overwintering sites; we have not been successful enough on our efforts on reforestation, and we need to find different ways to reinforce it,” they confirmed, reflecting a gesture of a certain disappointment at it.

Last, they invite all lovers of nature, specialists on plants and above all, fans and experts on mushrooms and bird watchers to come next summer during which the raining season turns this forests into a magical site to camp, to hike, to picnic and enjoy contemplating and studying the more than three hundred mushrooms species of our region and numerous bird and insect species as well as wonderful blooming during our season.

The Sun’s rays falling upon our region now, makes it feel so hot and bright at noon time now, that the sunlight feels as if hurting our eyes; we inhabitants in the region cannot help telling each other how unusual the spring temperatures are starting to raise, just as it has happened during the last few years, a total contrast now to the very cold winter days we just had two months ago.  The arrival of the spring make us feel all happy but concerned at the same time at this very unusual climate not really belonging to what we have been used to the last decades.

Here we should continue, every hour, every minute now is critical, since the very final massive leaving from this still very important part of the population remaining at El Rosario Sanctuary should be taking place any time now, either leaving all at once and by surprise, or gradually, as their capricious leaving way has been happening during the last days. 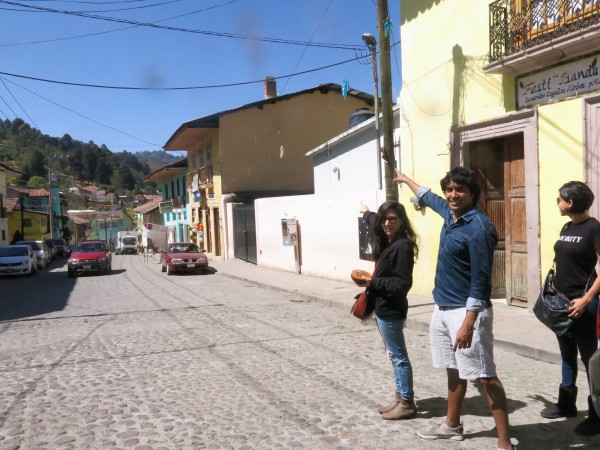 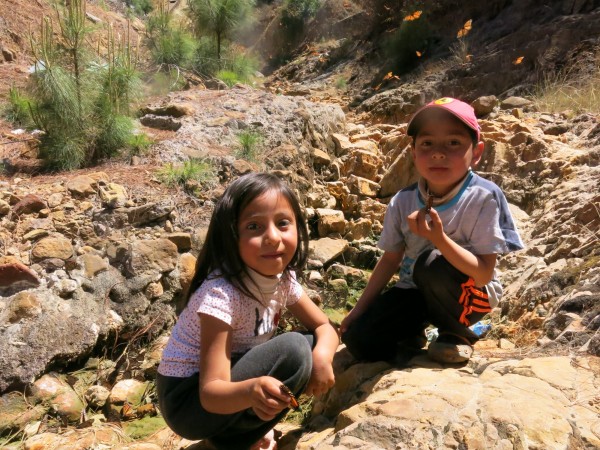 Streaming Down the Mountain 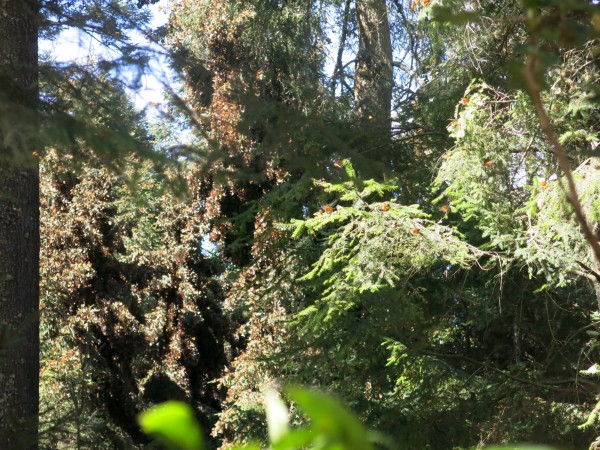 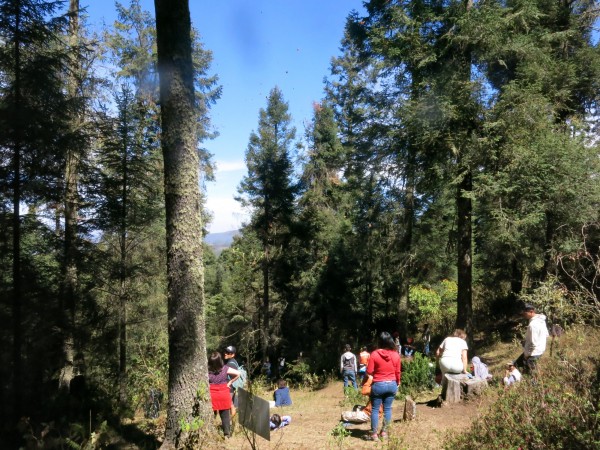 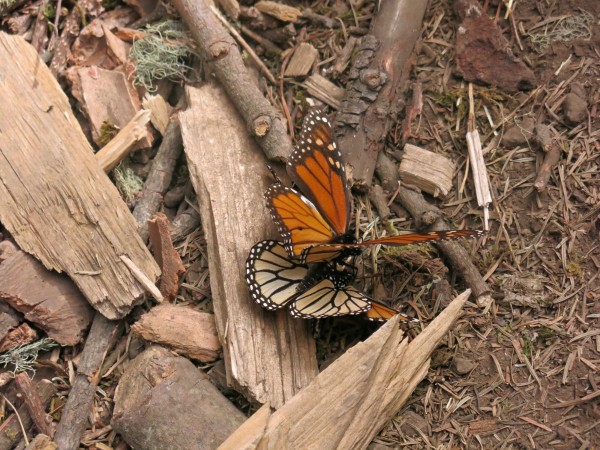 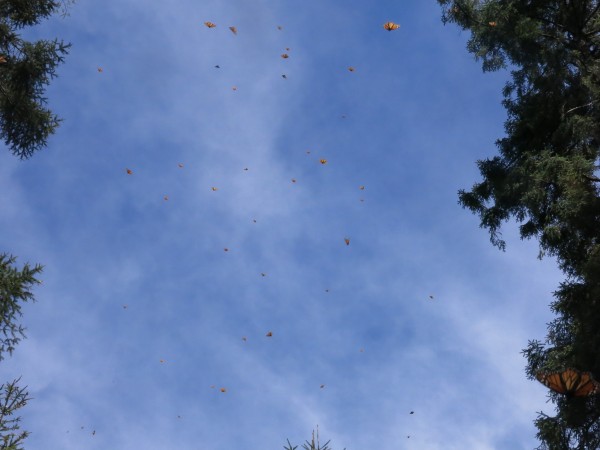 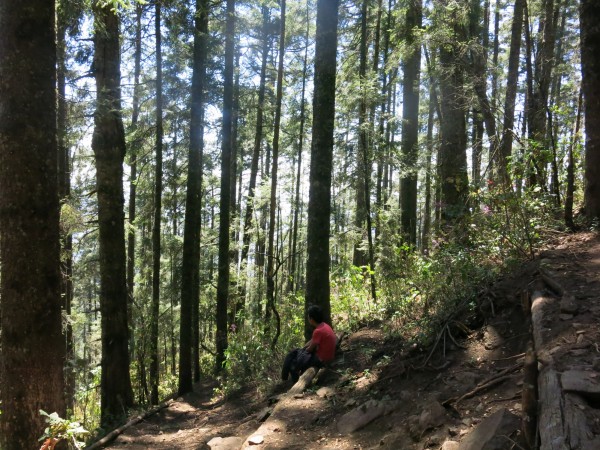