The moment for our farewell to Monarchs this season has arrived. On Monday, March 25 our regal butterflies simply decided it was time to leave. Most had already left by the time I arrived to El Rosario Sanctuary at 8-9 am.

“It is really over now. They must have started leaving before 8 a.m. as soon as the sun hit the site,’ sighed Mr. Silvestre, a passionate guide at the Sanctuary.”

For sure, and for a long time now, this has been the sanctuary holding its concentration longer than any of the other two Sanctuaries in the region,  “Sierra Chincua” and “Cerro Pelón.” Sanctuary “El Rosario” is last being emptied.

The colony still seemed really normal last weekend (March 23 and 24).  Many visitors still came and the Monarchs presented a rather normal activity with flying and mating all around.  A considerable quantity , on the other side, streamed down the mountains as usual during the many last weeks.

It was only some time around 8:30  a. m. on Monday and all what we could see at the core area was many, many scattered left Monarchs flying all over really high up in the sky as if rather in an east/northeast direction, only visible to humans’ eyes and  impossible to clearly shoot with a really good camera.  They would not immediately take their west/northwest emigration corridors as the former groups had been doing in advance for several weeks now, but triggered themselves as in a wide spectrum not defining a real direction.

Along “Rio Grande” at “ La Salud” location (the immediate neighboring community to “El Rosario” area),  and along  “Rio San Pedro”,  one of their favorites to stream down into Angangueo, only a few solitary Monarchs were flying along without one single stop at all.

A poor handful of Monarchs at the most can still be seen here and there at the very tip of a few branches of the now all thoroughly bright green Oyamel trees.  Perished butterflies look beautiful on the ground (if allowed to say it so). The combination of the monarchs’ wonderful fresh colors trap one’s eyes inevitably.  They will be soon disappearing, though. Predators will make a feast of them.

Swallows have been just arriving for nesting in our region, wasps increase their population, and temperatures increase to over 25 Centigrade. The soft sound of the wind and the singing of birds announce that the Spring temperatures are falling sharp upon us already.

It’s time for the magnificent monarchs to leave indeed.

I patrolled around in Angangueo town and the surroundings villages to collect testimonies. Everyone was conversing in nostalgia and sharing pride and commitment:

“My brothers and me had so much fun at the weekends helping mom and dad selling our pine-needle baskets…  so many people came … many “gringos” taught me some English and next season I will shout offering our baskets in English;  I feel so excited about it.  I wish we could get some English lessons at school.

Linda and her mom Griselda, running their own restaurant at the Sanctuary:

“We thought Monarchs could last a little longer as they did last year leaving until beginning of April;  they were so many more this year… but it has not been so, —the Mother said.

Linda,  age 16, born and living with her family in El Rosario added:

”we have met so many people with so many different professions here at our restaurant, but those studying monarchs  sound so incredibly interesting! we listen to them while we serve dinner to them, they know how monarchs are a signal that our forests and resources are still in healthy conditions, but we should be really fighting for conservation…  our fore-fathers used to preserve better than we present generations.  Monarchs have taught to us families how important this spot in our country is in terms of natural beauty and value! and besides, here me, learning how to run an own family business like ours.  Grandma’ says we would have not dreamed of this many years ago before Monarchs were known to the world. Monarchs have given us so much! what are we giving back to them in correspondence?”.  –-It was such a beam of hope to listen to Linda as the voice of our present generations…—

Virgilio, a young dad, living with his wife and children in the area too, said:

“It has been so impressive to see so  many people coming to us.  all is so fine but  I should say I can see our Monarchs every single year at their traditional overwintering sites up there in the forests since I was a little boy and now it has been so unusual that this year they were roosting down here so far from their ancestral sites up in the forest… what does that mean now?“.

For Virgilio, bringing a couple of his horses loaded with timber to offer and sell for sure at any of the local restaurants for their wooden stoves, allows him to make around 300  pesos which means a good fee for the day. This is an ancestral and very local activity regulated by local ejidatarios themselves in order not to damage our forests at all.

“great-grand-father and grand-pa and dad have been wondering at home while we sit together for dinner whether Monarchs might someday move on and choose a different forest area anywhere else and not anymore their traditional overwintering sites where we’ve seen them roost for years and years;  that could be a signal of many important things in our environment; Grandpa’ and Great-grand pa’ say; “ animal behavior is a signal to many things good and not so good around us and happening in nature and we should learn how to interpret it”, they say;  —Gaspar told us as if inviting us to reflect on such a possible events—.

Rosario 8, Lorena 8 and José 7, sisters and brother, born at one of the surrounding communities to the location, attending elementary school and loving to come as they leave school help their mom to sell at El Rosario Sanctuary, commented:

“What can we do to have as many for next season?   We hear that they do so much in USA and Canada, even rescuing baby caterpillars if necessary to grow safe and healthy at families’ homes  and schools… but they are not born with us here.   Our school science books tell about the conservation of our forests as the most important thing to do to preserve Monarchs.  Monarchs are now n important chapter in our books, did you know that?”.

Rosita and Carmelita, both 7:

“Yes, teacher Estelita, they indeed left yesterday; they did; we could see them passing by while we were arriving to school early in the morning, they flew high, high up in the sky!”.

Marco, 12, middle school attendant, shouting to me on passing by in his bicycle:

“Did you know they left already?.  They are nowhere in the forest to be seen now.  It had got to be! it is too hot now!”.

Pedro and his dad passing along “Río San Pedro”, in Angangueo:

“Yeah, yeah, they left already;  too many pouring down from the mountains all over for weeks and weeks! they would hardly stand the hot waves hitting us anymore!”.

Ramiro, Rogelio and Hernán coming out from inside the woods where “Río Grande”, —one of Monarchs’ favorite rivers—runs, as they leave el Rosario and fly down into “La Salud” neighboring  community:

“We mostly see them making at least a very short halt inside here; the previous groups did along the past few weeks;  not this last group anymore; they seem to have been in real hurry!”.

“Tell children in Canada and the Unites States that there they go to them.  we did it! we did it! until next year our friends! it is now your turn! until next season!”.

The impressive brown to gold velvet costume that the overwintering site where Monarchs were unusually roosting this season in Sanctuary “El Rosario”,  not allowing visitors to see where the border edges of the colony reached for weeks and weeks, was gradually being removed as the season drew to its end now.

Monarchs leave amidst a shower of friendship and cultural festivities organized in their honor at their departure, both in El Rosario Sanctuary and in Angangueo town!!

A Corn Fest on purpose of the conservation and protection of our creole corn grains, where Rufino, 8, proudly showed us around.

The  “Monarca Route”, bicycle race, running around our region in their honor.

“The Papantla Flyers” doing a special offering to the four cardinal points in Universe and  the 4 elements on Earth: fire, water, air, and soil, thanks to which every form of  life in our planet is possible.

Our now “Monarca” Beer, a really serious consolidation of a craft delicious beer created by a long experienced Chemist on Foods engineer,  born in Angangueo and now placing her registered product to the market, if possible all over Mexico for all Mexicans to be proud of Monarchs.

And all of this with Mexican dancing and our extraordinary, representative Mariachi music making “goose bumps” on us at hearing it among all these festivities!!

She’s a symbol of friendship, plurality, solidarity, commitment and the feeling for one single identity all over and across borders! That’s what the Queen of butterflies, the Monarch, shall represent all over the world!! 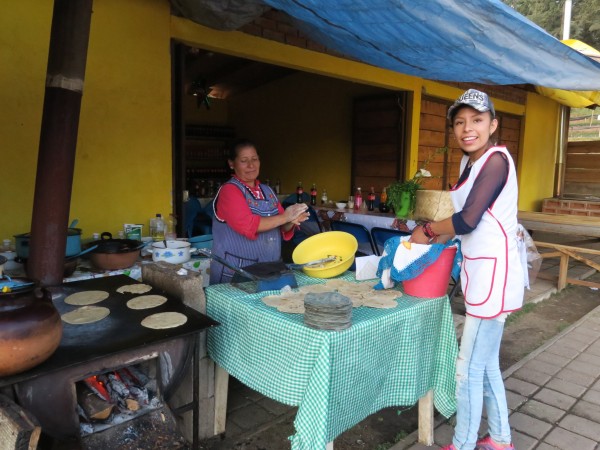 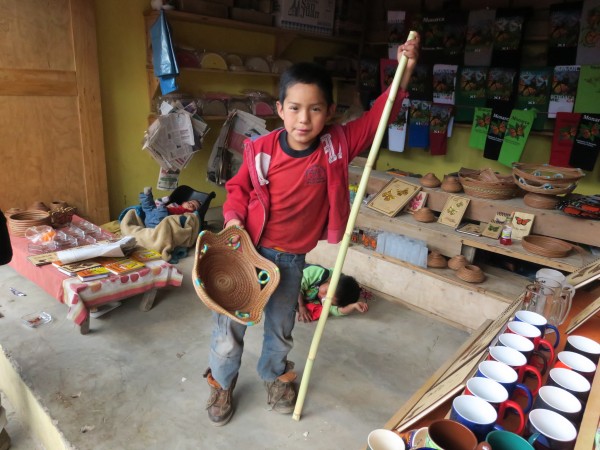 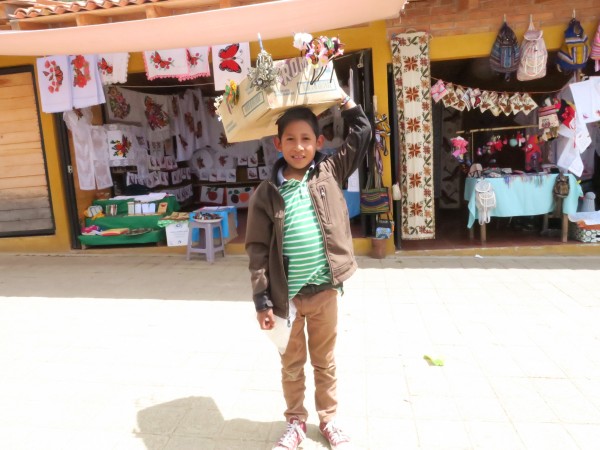 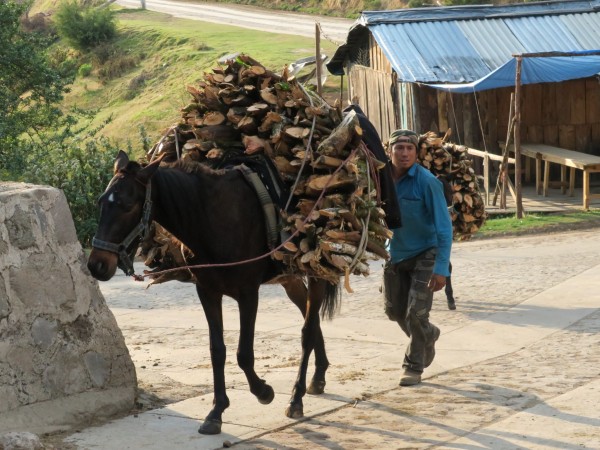 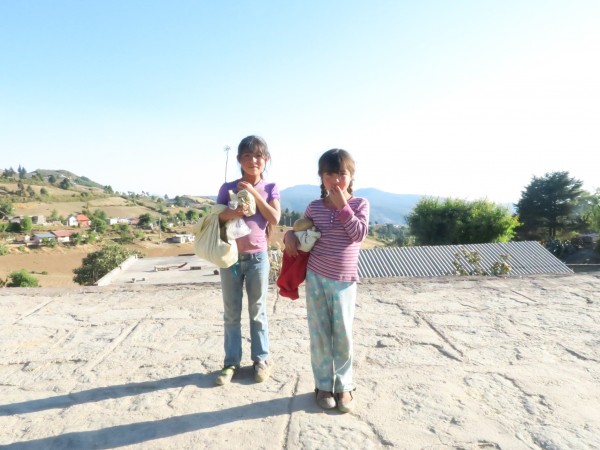 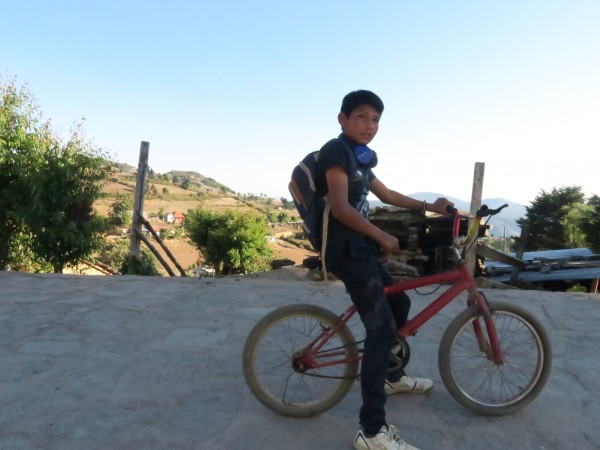 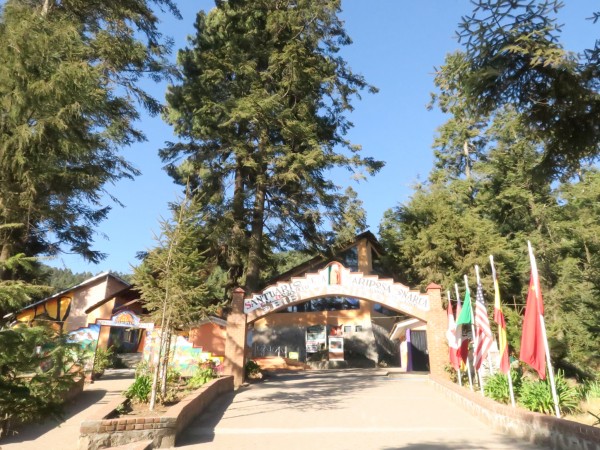 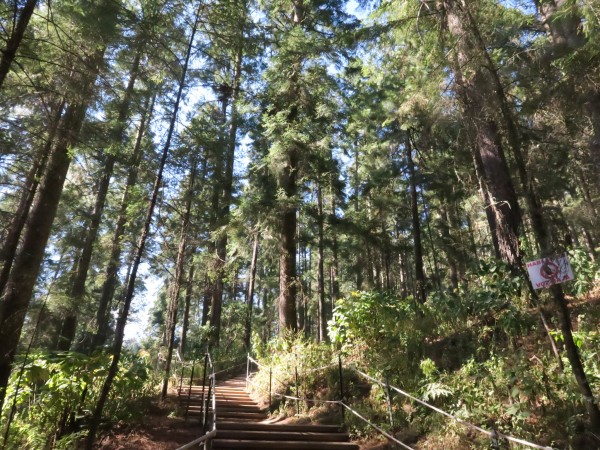 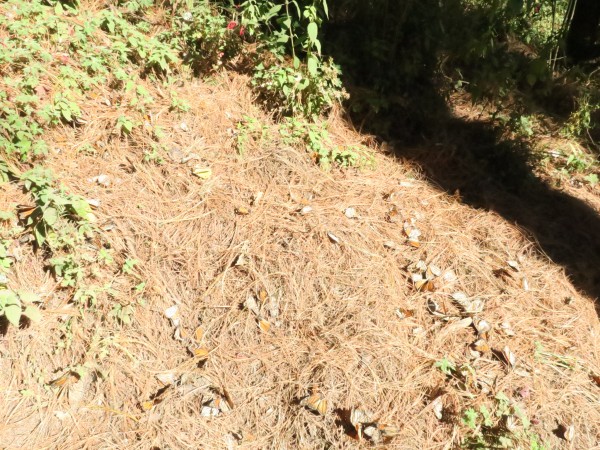 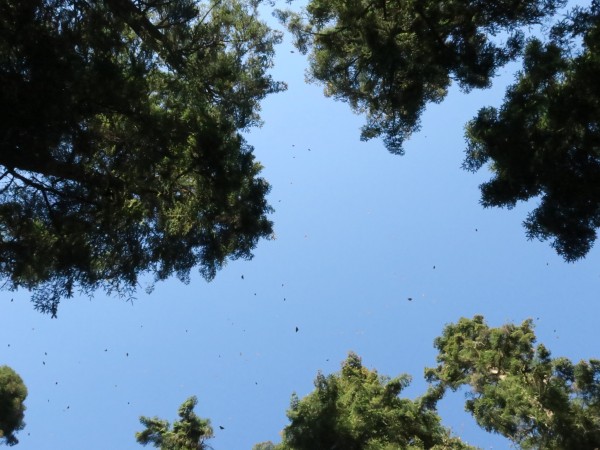 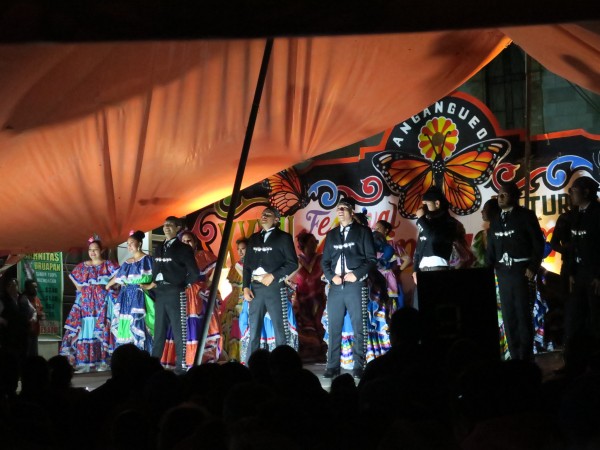 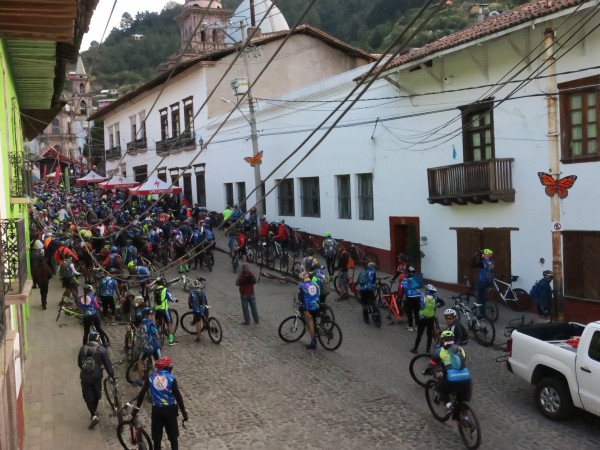 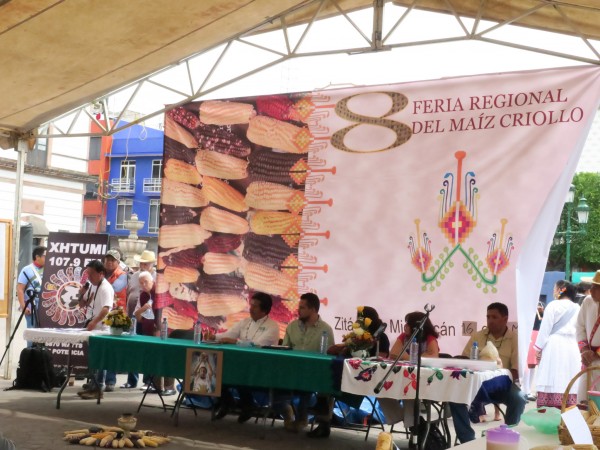 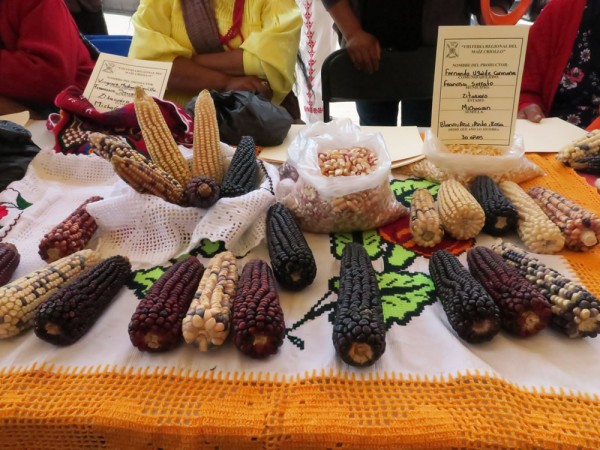 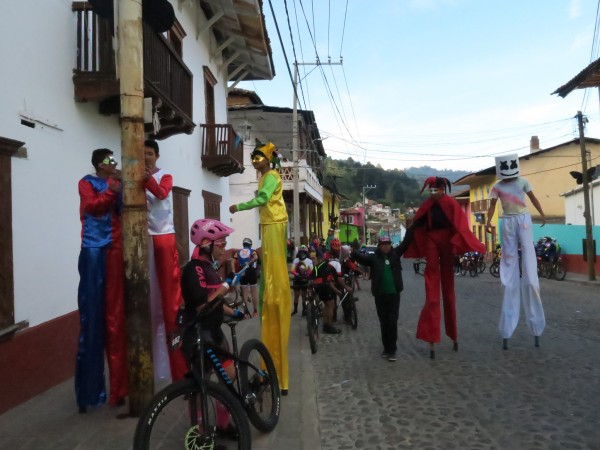