A cheer filled the air as monarchs surged north into the Nevada deserts this week cruising the Colorado River flyway! Meanwhile, monarchs also journeyed north into Arizona and New Mexico as new sightings appeared. Almost all of the new observations reveal worn and frayed monarchs. A few new sightings appeared in California along the coast near San Francisco this week as well. Monarchs are now spanning four states in the West! Be sure to look at the Journey North Monarch First Sighting Map to see their movement the last few weeks.

Megan Goyette is a Wildlife Biologist and monitors monarchs at Bosque Del Apache NWR near San Antonio, New Mexico. This year she noticed an exciting change!

“Just wanted to update you on what I am seeing here in New Mexico. We have had about 6 monarch adult sightings on the refuge, the first one was the last week or so in March. They have all been very tattered. The milkweed is starting to emerge, most plants are barely breaking ground and some are around an inch tall. I found a milkweed cluster yesterday with about 20 eggs in the small milkweed patch, some plants even had two eggs on them. I found a few eggs in another area on the refuge in a larger milkweed patch. Seems to be many more monarchs than usual this spring!”

“saw 6 monarchs today. Two of them were mating in the tree and then flew attached together (mating.) I also saw another one nectaring from the pods of a Gooddings willow tree. Exciting stuff!!”

“I saw the first monarch of the year this afternoon in the University of Nevada Cooperative Extension Botanical Gardens. A beautiful female laying eggs on the newly emerging shoots of our Asclepias speciosa patch! She was laying eggs on even smaller, barely emerging shoots. She was very busy looking and she could find them. I hope she is still there tomorrow and finds our nice vigorous A. erosa shoots!”

Thanks to the recommendation of a friend, Kelly Piccinini reported her first monarch further north in the Las Vegas region this week from March 24.  It’s never to late to report sightings, so please do! Just make sure you record the correct date of observation.

Arizona saw more monarchs this week, too. The Nature Conservancy at Muleshoe Ranch staff, located north of Willcox, reported their first monarch of the season on Thursday.

Sharon Marmaduke witnessed the first monarch in the middle elevations of north-central Arizona.

“A faded monarch flew by this morning. First time I’ve spotted one in Camp Verde this early in the year! Although I never got a close look, I think it was a female looking for milkweed as it passed lots of flowers by. We do have Horsetail (A. subverticillata) and Arizona (A. angustifolia) milkweed just beginning to sprout.”

“(The monarch was flying) from East to West. It was really moving. One of my Horsetail Milkweed plants is about a foot high. I was hoping she would find it, but she got moving on to the next pasture where there is more horsetail milkweed.”

We’re all worried about the monarch population in the West, but the many sightings of worn monarchs this Spring are hopeful. Everyone is very excited! So, the questions continue. Where are these old monarchs coming from? By your reports you can see a northward movement. Are they remigrants from Mexico or California or both? We’ll continue to explore the possibilities as we see more sightings this month. Every sighting counts and helps fill another gap in the Western Monarch puzzle. 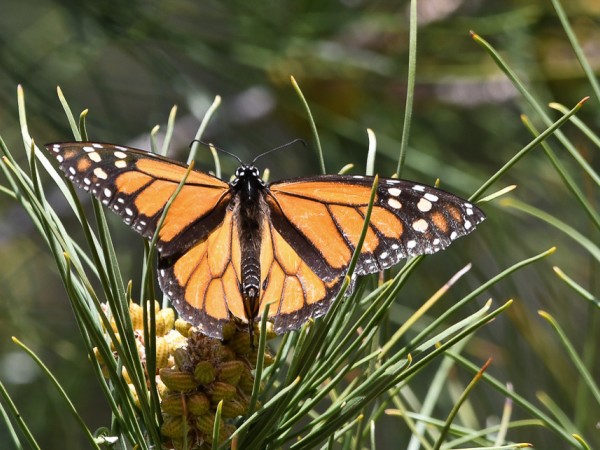 A Monarch with Warn Wings 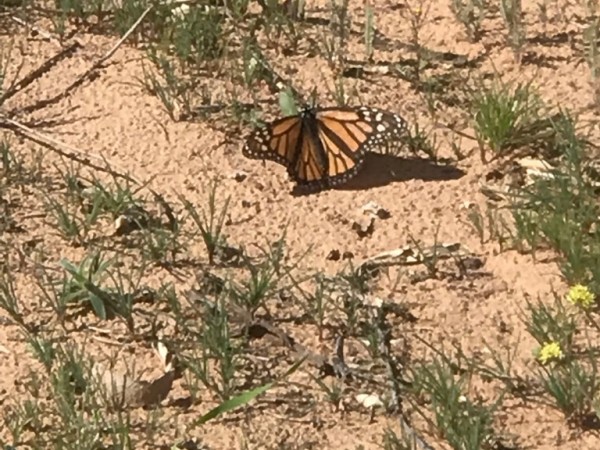 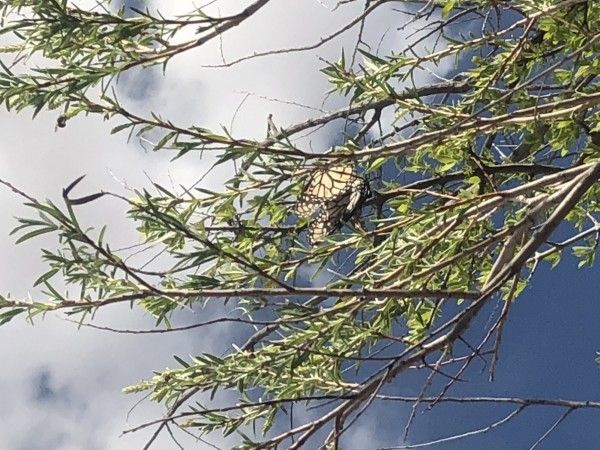 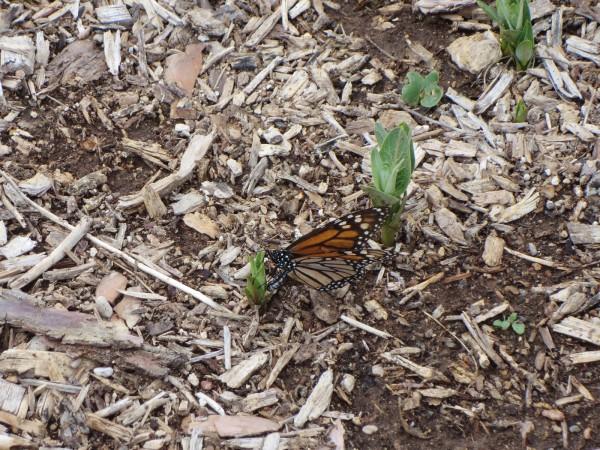