Monarchs are on the move in the West with a giant leap for monarchs this week into Utah! Monarchs are on their way with summer right around the corner to their seasonal breeding grounds. Meanwhile, they expanded their numbers and sightings were more numerous in California as warmer temperatures set in. Arizona saw an uptick in monarch movement too.

Sightings increased across California this week. Here are some samples from across the state.

Meghan in Wildomar spotted a monarch on May 3, “Our first Monarch butterfly this year!”

Theresa in Sunnyvale saw her first of year monarch on May 4. “It just flew into the backyard and then flew onwards. I have lantana but the monarch didn’t see it.”

Joyce in Union City saw two monarchs on May 5. “Two monarchs dancing together in the sky around my garden.”

Bob in Escalon saw his FOY monarch on May 7. “Sighted feeding on a butterfly bush in the backyard, about 30 feet away from a large milkweed plant.”

Saritha in Los Alamitos saw one monarch May 8. “One monarch feeding from a white yarrow flower.”

On May 9 Laura in El Cajon saw one monarch, “We aren’t sure what kind of flower that is though!” Do you know?

We are seeing a late surge of new sightings in the lower deserts of Arizona this week. We usually see this trend towards the end of April but this is about ten to 14 days later than usual. Where do they come from? Other areas in Arizona or perhaps from Northern Mexico locations, a new generation. What do you think?

Angela just moved to Arizona from Oregon one month ago and knows her monarchs. She was excited to see her first monarch on May 5. “I live near the Estrella Mountains outside of Goodyear, AZ. A very fast-moving Monarch flew by my blooming cactus, almost landed, and then kept going. 100% sure it was a Monarch.”

Charlotte found monarch larvae on her Desert (Rush) Milkweed, A. subulata, on May 5 in Phoenix. “I saw at least three caterpillars.”

Dale spotted his foy monarch on May 7 in Surprise. “Male…was at Red Bird of Paradise for only a few minutes…First butterfly I have seen this year. He had yellow pollen on wings. Seemed to be in good shape.”

I found five fifth-instar monarch larvae munching on Arizona Milkweed, A. angustifolia, in my backyard this week as well.

Annette lives in Garrison, near the state border with Nevada, and spotted the first monarch in Utah last week on April 30! “I was out walking and it flew directly in front of me, I tried to get a photo but it was moving pretty quickly and flew up into a tree and I lost track of it.” She saw another monarch on May 3.  We love to see a photo of first sightings especially, but Annette has been active in reporting monarchs in Utah in the past and we are excited at her discovery. This sighting is within a week of the normal first sighting of monarchs in Utah.

Spring weather is great for a walk so be sure to take your camera or phone along on your neighborhood stroll or hike and tell us what you see. Your reports can help everyone know the “status of the breeding habitat” where you live. Don’t forget to report milkweeds up and, of course, any monarchs you see! Remember, monarchs may lay eggs on milkweed before they flower so other nectar resources are important. A photo from your phone or camera can help us all see the progress early monarchs are now making in the spring migration. Warm weather and southerly winds can help monarchs move into your area! Be sure to watch https://www.windy.com frequently to see when winds favor monarch movement in your area. Where will monarchs fly this week? 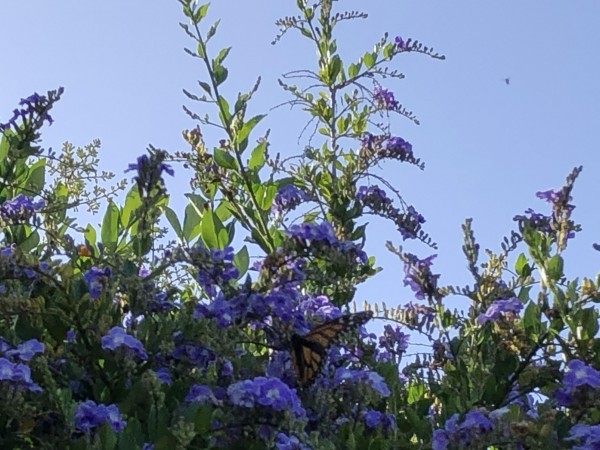 Do You Know the Flower? 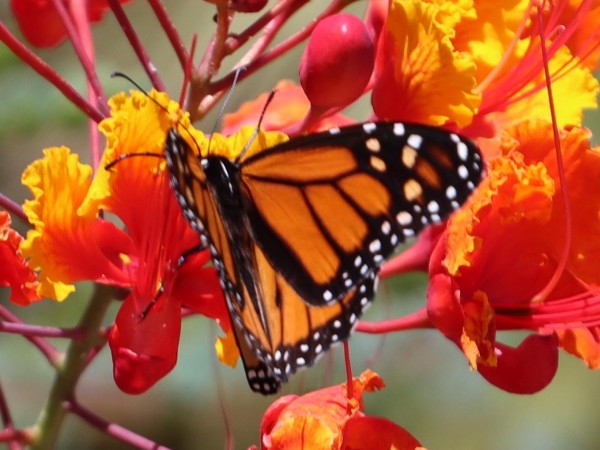 Monarch on Red Bird of Paradise 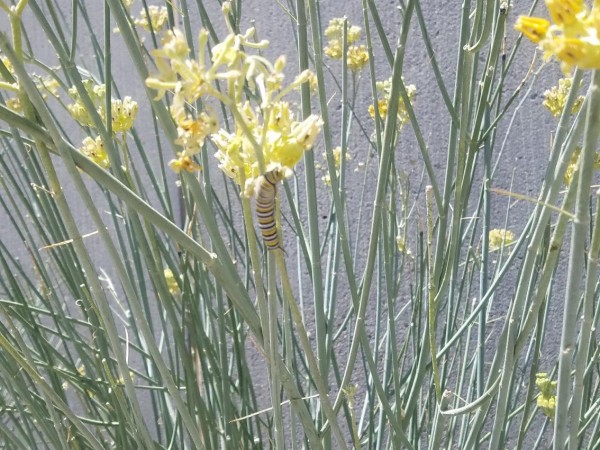 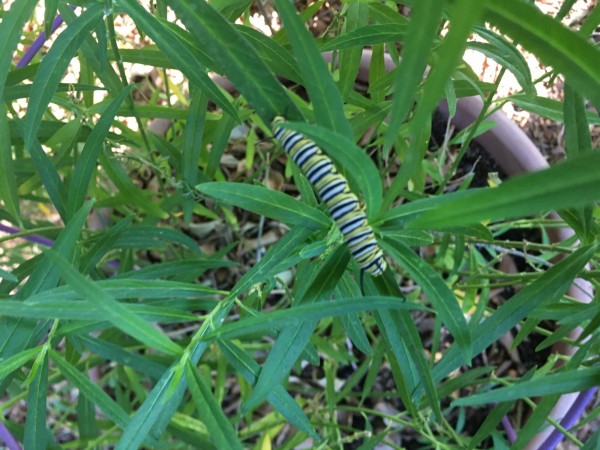