Since February we’ve reported monarchs nestled in coastal California and the lower deserts of Arizona and California. From the data you’ve reported, it appears to show some monarchs stay in some parts of Southern California and others seem to move outward on their Spring Migration. Even with the low overwintering population, some have sailed inland and also to Northern California with reports now of monarchs entering Oregon and even Washington but without a photo verification. (So many other butterflies can be easily mistaken for a monarch but having a camera in hand when you see one is also a challenge.) Southern Nevada and Utah also have now seen monarchs arrive and move on as has New Mexico. It’s been a busy three months! Soon, as we approach the Solstice in late June, monarch movement will stop as they navigate nearby breeding grounds rich with native milkweed in bloom.

Sample of Monarch Sightings this Week

Rachel found one monarch in Saratoga Springs, Utah, on May 29. (Monarchs are now only about 25 miles south of Salt Lake City!)  “Female spotted near showy milkweed not quite in bloom.”

On June 2 Rusk Ranch reported a monarch in Cave Junction, Oregon. “One visited our butterfly garden.” (We are still awaiting photo documentation of monarchs in Oregon.)

On June 1 Della found 5 monarchs in Cardiff by the Sea, California. “At 9:50am, 64°F, light breeze, cloudy. No tags seen on any. Outside Glen Park on the side of Chesterfield Ave. #1 was a very faded male on lantana; #2 a fresher looking male on lantana, light skirmish with #1, but mostly feeding; #3 Female on a cactus flower, good condition.  I returned at 3:30pm: #4 a female on Buddelija good condition; # 5 also a male (not sure) flew in while #4 was there, good condition, Both feeding.

Della reported a monarch on June 6 in La Jolla, California. “My friends Dave and Jill saw this male in good condition near Hermosa Avenue & Bird Rock Ave, La Jolla at 10:30am 6/6/21, 63°F light breeze, over cast. They also saw another in La Jolla yesterday afternoon, no pic of that one.”

Movement during the summer months tends to be narrower in scope, often within 30 miles according to some observations. It’s an important time in a monarch’s life-cycle as numbers can expand when conditions are perfect or stall when they’re not. Balmy sunny days in the 70’s and 80’s with occasional showers are ideal to keep milkweed fresh for tiny caterpillars to consume. But raging storms can harm larvae sometimes and record high temperatures over 100° affects female monarch fecundity. Studies have shown temperatures over 108° can be lethal for monarch larvae as well. Prolonged record heat spells can affect the monarch population, so be aware of the conditions where you live or are visiting and the number of monarchs you are seeing.

All eyes are now on Oregon, Idaho and Washington for these next two weeks. As Dr. David James, Washington State University, recently reported:

“Getting Closer! ‘Several’ monarchs were seen today at the Klamath River Club property near the small town of Klamath River in northern California just 9 miles from Oregon! This sighting was confirmed by video and photograph (taken by Tom) and reported courtesy of Suzie Savoie. Milkweed patches were established on this property 4 years ago as part of a restoration project Suzie was involved in and the monarchs today were the first seen taking advantage of the blooms (and perhaps laying eggs). Time is running out though for the northern push. Most northward migration will cease in about 2 weeks. Eyes to the blooming milkweed!”

Will Western Monarchs have a Good Year?

Like trying to predict the weather accurately months in advance, it’s difficult to say exactly what monarchs will face during this summer breeding season in the West. But we still asked Dr. David James, Washington State University, to share his thoughts.

“What do I think will happen this year?! Ha! Nostradamus hat on!

“Well, I think we will see some monarchs in Idaho, progeny of the Mexican influx.  Less likely to see any in WA but I don’t discount it yet.  The next 2 weeks will tell.  With good winds, the few migrants there are in N CA may yet make it to WA.  There will be a small population of monarchs in southern Oregon during the summer.

“Summer breeding may be good (numbers of natural enemies are possibly lower this year according to some reports) and the fall migration may be comparable to last year.  The big unknown is whether the migrants will join traditional overwintering colonies or whether they will winter-breed in SF and LA?  I think this will largely depend on prevailing weather conditions in California in September.  If it’s like last year, i.e. record heat, the majority of migrants will become winter breeders.  If September climate in CA is ‘normal’ then we may see good numbers at overwintering sites, perhaps higher than 2020/21.

I do think the monarch is capable of surprising us!”

Not only the Northwest!

Not all monarchs will be in the northern stretches of the West. Monarchs also are found in the higher elevations of both Arizona and New Mexico where temperatures are cooler. They are often first noticed in early to mid July in the Mogollan Rim region of Pinetop, Lakeside or Show Low, or Flagstaff or Grand Canyon National Park as well as in New Mexico. During July and August monarchs they can found in be pretty much every state in the West!

This is the final report of the Spring migration, but your reports continue to paint a picture of the summer breeding patterns in the West. We’ll focus on your data for a Western Journey North Monarch update during Pollinator Week June 21-25. So, grab your camera or your phone to snap a shot of what you see whether it is an adult monarch, egg, larva or pupa. Help us all learn where monarchs are active – or where they should be but are not. This is an important summer in the West after the extremely low overwintering population in California and each sighting is important and hopeful. Happy Summer! 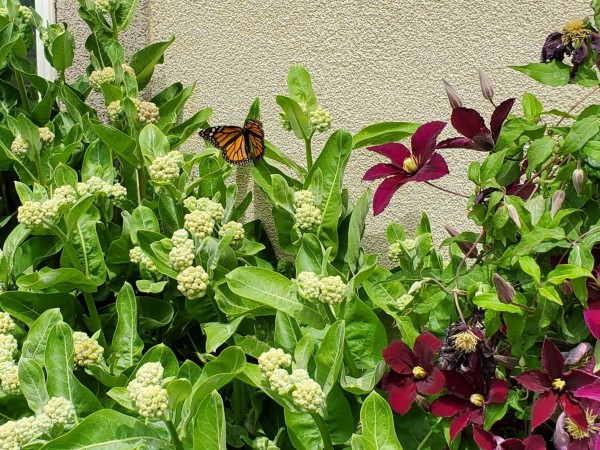 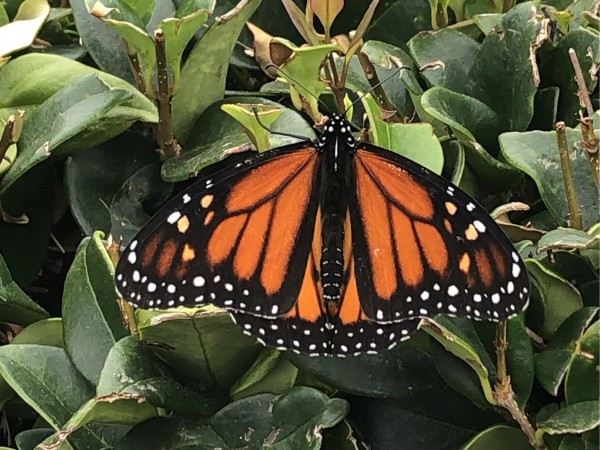 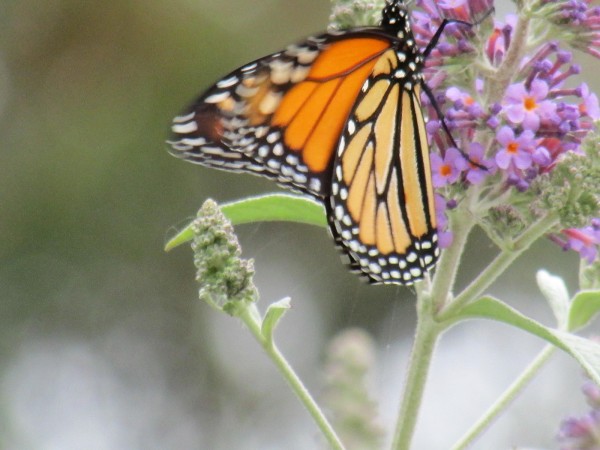 One of Five Monarchs Seen

Cardiff By The Sea, CA
Photo by: Della