Monarchs on the Run!

A major snow storm belted the northern states of the West this week blanketing some mountains in feet (not inches) of snow in portions of Washington, Oregon and Idaho! While an early snow in late September has occurred in the past, the depth of snow surprised everyone. Citizen Scientists looked at the snow-capped mountains in the distance and hope monarchs are racing to the safety of their overwintering grounds.

Connie Masotti is eagerly watching for the first monarchs to arrive at the Monarch Butterfly Sanctuary in Pacific Grove, California.

“I have not seen a monarch since April….However, some of the folks that I trust know a monarch when they see one, have seen some in the area although no clusters in the sanctuary. We were really hot for a couple of weeks and so while temps have dropped here on the coast, we are not having anything drastic. We did get some wind on Saturday and I checked the sanctuary to see if any came in to get out of the winds but nothing. However, it is still not unusual to not have clusters this time of year.”

Monarchs are on their way and continuing to move through the area. Maria in Woodland, California, found a monarch in her yard on September 28:

“Female fed on butterfly bush for about a minute at 2:45 in the afternoon. Viewed through binoculars from kitchen window. She took off before I could get a photo.”

“At the 9/20 thank you bbq for the more than 100 coast clean-up volunteers a fresh female monarch glided over all to the newly established pollinator garden to find the blooming native milkweed! All week reports have come in from all around the greater SF Bay Area (yes! Albany and San Leandro, Ardenwood and Bolinas, Stinson and Green Gulch, Lake Merritt and Santa Rosa, Ukiah and Palo Alto!) of a monarch here, a monarch there…most nectaring (tithonia a big hit this year!) but then there was the dramatic report of a whole posse of 10 bravely crossing the Golden Gate and making it to the Presidio of SF!,plus excited students finding caterpillars to set up for one of the best first biology lessons ever: metamorphosis! Now for the next sign of the season: Welcome Back Monarch events throughout the overwintering coastal zone of California…docents are reviewing notes and updating their stories and the 5Ms (Mostly Mediocre Musical Monarch Melodies) are tuning up!”

This week new monarch sightings were not limited only to California. Marc in Los Alamos, New Mexico spotted one vivid colored monarch on September 28 as well.

“Observed male on Buddleia in the late afternoon.” (link to report)

In early September Annette found a chrysalis in her yard in Canelo, Arizona attached to a purple coneflower. On September 15 Annette was delighted to find a new monarch eclosed.

Terri in Sedona, Arizona, finally found monarchs in the community garden on September 24.

“This afternoon I finally saw 3 monarchs and one Caterpillar looking for a place to hang I think cause it looked full grown and not on milkweed. This summer I’ve seen very little activity even though there were plenty of flowers. More swallowtail than last year though. Milkweed is mostly untouched.”

From tagging, some monarchs will migrate to California while others may migrate to Mexico. Where do you think the monarchs in New Mexico and Arizona are heading? 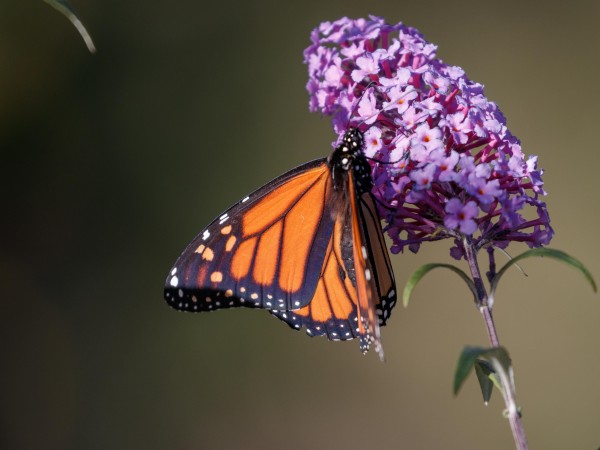 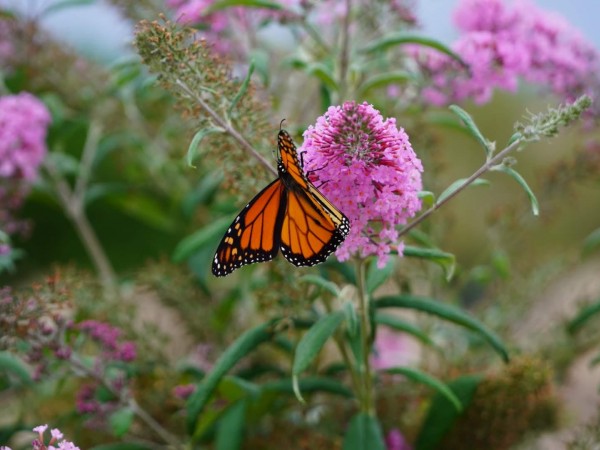 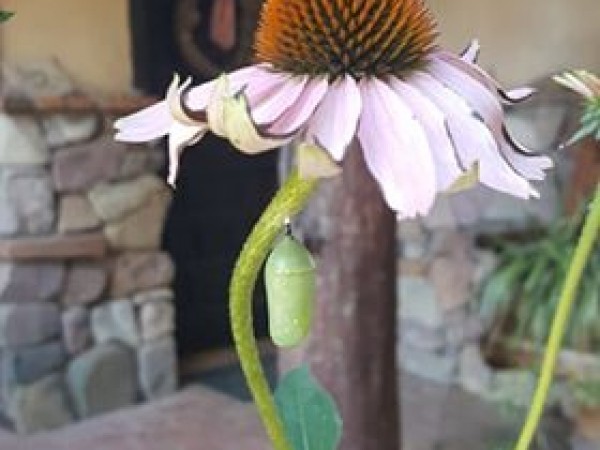 On A Purple Coneflower