Change is in the air as monarchs move closer to their winter destinations at their overwintering sites. Night temperatures are dropping and winter storms are beginning to slide through the Western states with northerly winds pushing monarchs onward.

Summer Intern Lindsay Martinez at Dinosaur National Monument in Vernal, Utah finds the season in the field in transition.

“Temperatures are getting colder - below 40 degrees most mornings - and monarchs don’t come out until a little later in the day when it is warmer. It’s definitely fall here, and a lot of the good nectar sources have finished blooming. A couple monarchs are still around though and nectaring on the later season stuff.”

Monarchs continue to move through Arizona appearing in backyards and natural areas with reports of single monarchs visiting fall flowers in bloom.

Rabbitbrush or chamisa is a major nectar source in the West during the Fall Migration. Abundant throughout the region above 3,000 feet elevation, it can provide a river of nectar fueling monarchs long journey. Kathryn in Edgewood, New Mexico, spotted a monarch refueling in her yard on October 7.

“Solitary adult Monarch butterfly sighted at 11:51 a.mm. in a large chamisa in our backyard.”

Monarchs are also moving towards the California coast. Michael in Sonoma, California, saw a monarch on October 6.

As cooler temperatures progress through the northern part of the West some monarchs are beginning to appear in the northernmost California overwintering sites. Connie Masotti is eagerly watching for the first monarchs to arrive at the Monarch Butterfly Sanctuary in Pacific Grove, California.

“Just was in the sanctuary and saw three separate monarchs flying through.  Those were my first of the season. Folks in Pacific Grove are spotting many along the beaches and in neighborhoods that without a weather incident they are not in the sanctuaries yet. However, that is not unusual and we are just waiting to see what happens”.

We anticipate a major weather change this week with a large weather system moving into the West bringing high winds and the coldest temperatures of the season. Many areas may experience their first hard freeze while gusty winds from the north will push remaining monarchs in Utah and Nevada into California, Arizona and New Mexico. You can watch this wind change where you  live on Thursday and Friday as well as follow other changes by watching the winds in motion on Windy https://www.windy.com. When monarchs appear, be sure to report them to Journey North! 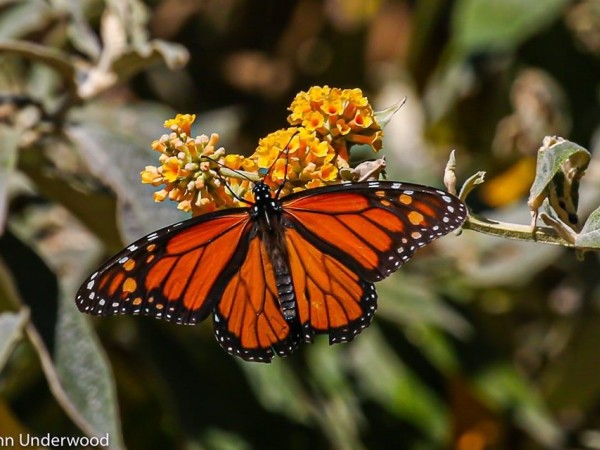