Note: Observations highlighted in this report are from October 5 –October 12 . To explore more recent observations, check out “The Leading Edge” section of the news update and explore our maps.

A major cold front and winter storm roared through the West this week bringing near record-breaking low temperatures and the first snow of the season all the way south through the central Arizona highlands. How will this affect monarchs still on the way on their Fall migration? Your reports will help us find out! But for this week there is good news: Monarchs are beginning to arrive at the coastal overwintering sites in California and larger numbers of monarchs are now reported as the migration gathers monarchs along the way.

Both singletons and larger numbers of monarchs appeared this week in Oregon, California, Arizona and New Mexico.

Daniel in Paso Robles, California, spotted one monarch high in the sky on October 5. “Adult flying north to south.”

Kristen found monarchs on October 7 in Morro Bay, California. “8 adult monarchs observed at one time, with several other individual or pair sightings at the same location. Windrow of about 8 blue gum (Eucalyptus globulus) trees at a local park in Morro Bay near Alva Paul Creek. Monarchs landed frequently on showy honey-myrtyle (Melaleuca nesophila) trees, as in this photo.”

On October 8, Akimi in Klamath Falls, Oregon, reported one monarch. “On Oct.8, 2021 this migrating male monarch was seen on my tomato plant in Klamath Falls, Oregon. This is the first sighting of a monarch in three years after tagging over a 100 in 2018 through Dr. David James at WA State University. Skidaddles my friend, and be on your way soon as temperatures are going to dip down to 19 degrees F tomorrow night. Safe travels as you head to your wintering habitat in coastal CA.”

Bernice counted 24 monarchs in Avila Beach, California, on October 9! “Many monarchs landing on the bed of orange flowers, and flying all over.”

Michelle in Peoria, Arizona, saw one monarch on October 11. “Monarch was nectaring on Asclepius subulata in my front yard in Phoenix, AZ.”

Early monarch arrivals are appearing at the overwintering sites along the California coast and the initial reports are hopeful. Last year the total number of monarchs were just under 2,000. So far, there are more monarchs than expected. Be sure to check out the photo of monarchs clustering on October 15 at Pacific Grove sent in by Robert Pacelli. Last year there were no monarchs reported at all, so this photo gives us all hope for the official counts in November. Robert reports, “I think it is fair to say we have monarchs all over Monterey County. 1,316 monarchs counted by the museum this morning (Saturday at Pacific Grove). Lots flying around and hundreds of visitors.” The monarch numbers are very fluid right now as monarchs are arriving and will continue to move around the area, but they are good indicators to remain hopeful.”

Dr. Chip Taylor of Monarch Watch shares, “Wow! Good news. After two years with near zero this signals a good recovery and is much better than expected. There are several differences between this year and the last several - one being that the temperatures, being cooler this year, favor the migration relative to the hot temperatures of the last several years.”

Other monarchs still on the way…

This week we drove out to the Arizona – California border and camped along the Colorado River chasing the monarch migration. On the drive out on October 13 we saw three monarchs flying South across the road, one crossed I-10 just outside of Buckeye while another flew over near the Vicksburg exit. The last one was spotted on Highway 77 near milepost 33.

When we arrived at our campsite at Cattail Cove State Park south of Lake Havasu we were surprised to see 16 monarchs fly off the Colorado River into nearby Sissoo, Ficus and Carob trees as singletons. We talked to the rangers who reported the monarchs began appearing two weeks prior and they would find them on the grass sipping dew in the morning at the residences. Approximately 20 monarchs appeared each day and some were mating. Cattail Cove hosts a Monarch Waystation with Desert (Rush) Milkweed, Asclepias subulata.

The next morning, we drove out to Rotary Park in Lake Havasu. We’ve been monitoring monarchs at this location for many years and the last two years showed few monarchs. But this year was different. There were at least 60 monarchs present over 90 minutes nectaring mainly on the nearby Chaste Trees and Lantana and occasionally on A. subulata blooms or roosting in nearby Aleppo Pine trees earlier in the early morning chill. There was also a good population of Queen butterflies, Danaus gilippus, joining them to feed on flowers as the temperatures warmed. No monarch or queen larvae were seen on the milkweed.

Friday morning we made one more trip to Rotary Park. It was cool in the low 60’s but sunny and windy as you can see in this short video yet the monarchs still came out to nectar.

The number of monarchs was much lower today with an estimate of 25 to 30. But when the monarchs disappeared in the higher wind we found them seeking refuge in the Aleppo Pine trees on the lower branches of the South side. Winds were strong from the Northwest. At first the monarchs spread as singletons, but then they started forming tiny clusters of two monarchs and later four that added two more to their group a short time later. There are still more monarchs on their way!

When you are out for a walk keep a camera in hand to document any monarchs you see or that fly by. Include as much information as possible such as what the monarch was doing, feeding on, or any noteworthy find. Thank you for your support. Your contribution of data increases the understanding about monarchs. 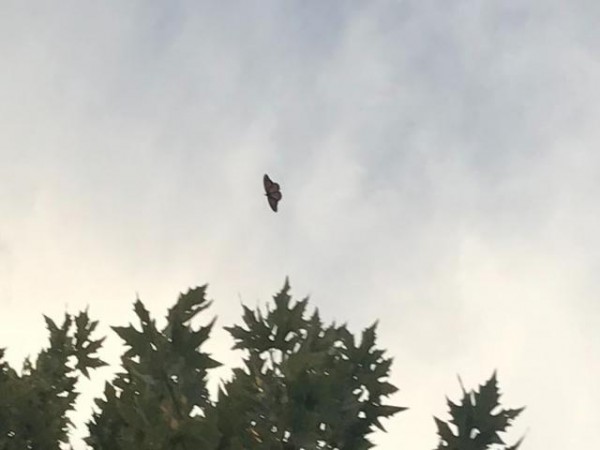 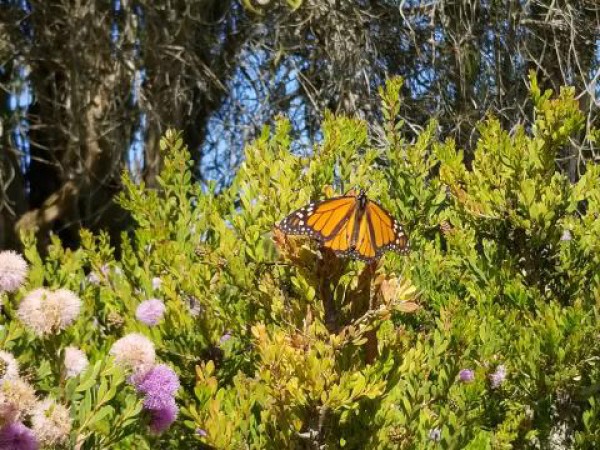 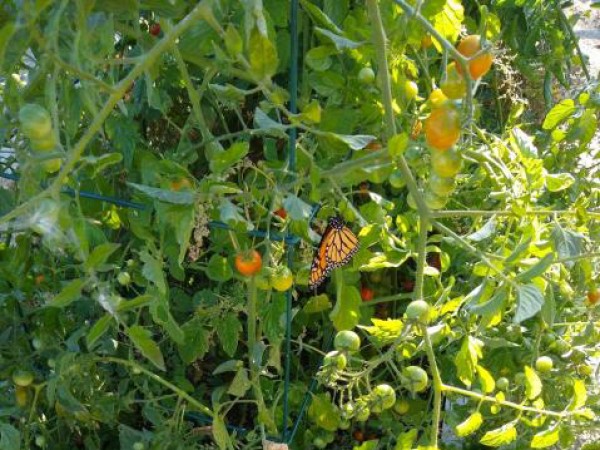 Klamath Falls, OR
Photo by: Akimi 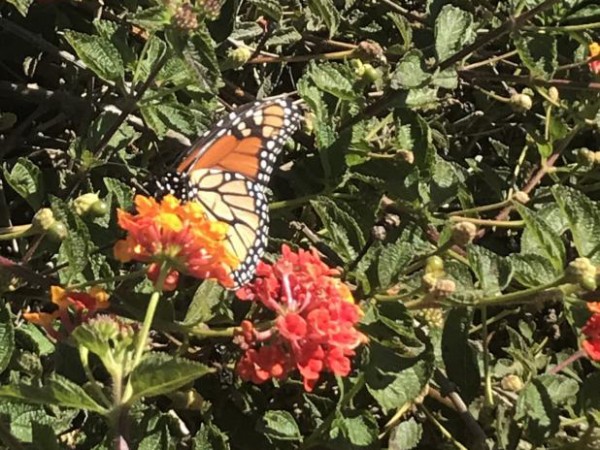 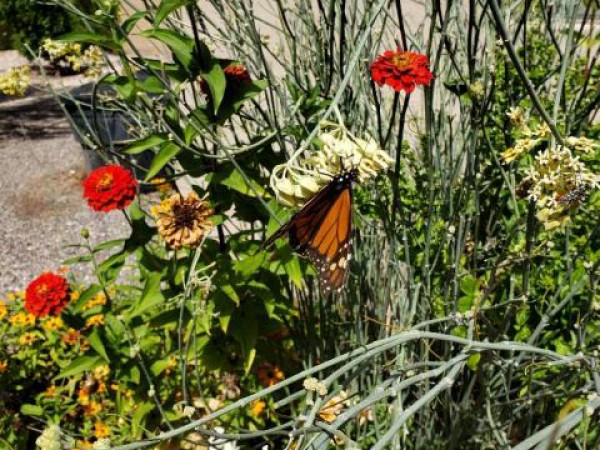 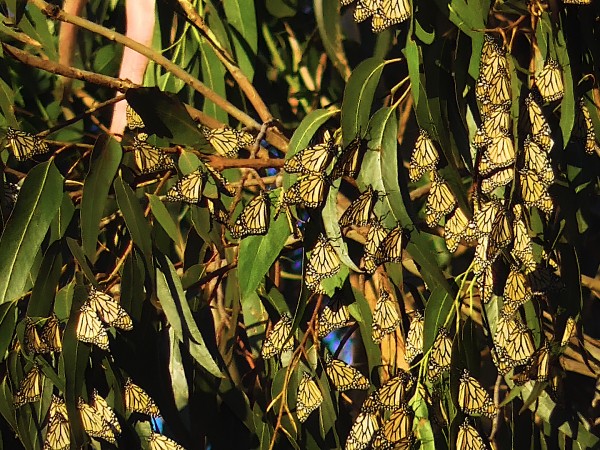 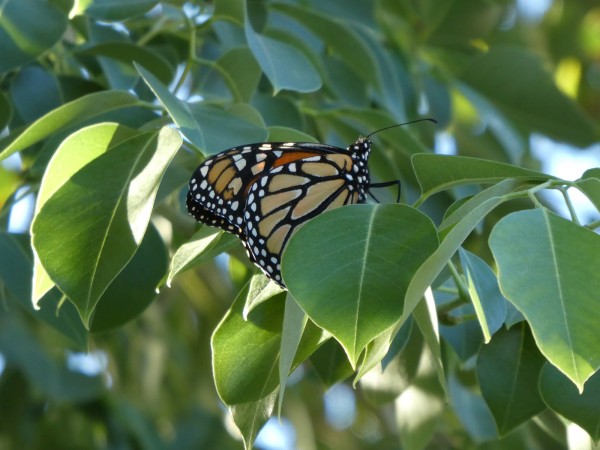 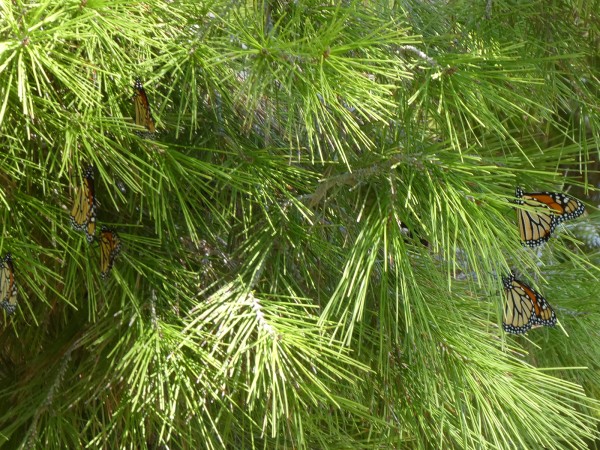