Cape May a “Highway” of Migrating Monarchs!

Situated along the shores of the Atlantic Ocean, the New Jersey (NJ) Audubon Cape May Bird Observatory provides an ideal location for bird and butterfly watching, especially during fall migration. Cape May is a narrow peninsula with Delaware Bay on the west and the Atlantic Ocean to the east. The Cape May peninsula forms a bird funnel, directing migrating songbirds, hawks, and monarchs along the coastline during spring and fall migration.

Cape May typically sees several peaks of migrating monarchs during September and October. We had a lot of monarchs from Sept. 27 to October 5, followed by a long lull when a weather system with southerly and easterly winds lingered. Numbers started to climb again 2 days ago, when northwest winds returned, and yesterday afternoon we found 2 roosts with an estimated 1500+ in each roost. We have received several reports of monarchs streaming down New Jersey’s Atlantic coast over the last 3 days, and numbers are rising here in Cape May Point again today.

We have had two amazing pushes of monarchs this fall. In addition to the late September/early October push, a second big wave passed through from Oct. 19th through 23rd. On October 22, beginning around 9:15 am, the dunes in Cape May Point became a highway of migrating monarchs. Some butterflies stopped to rest and refuel but the majority kept right on going. We noticed, around 1 pm, that the movement was slowing down. Yesterday afternoon, the 23rd, we saw more of a migration in the dunes again, although nothing like the numbers from the day before. It’s cloudy this morning so who knows what today will bring. Keep looking up!

Photo and Video by: NJ Audubon Cape May Bird Observatory 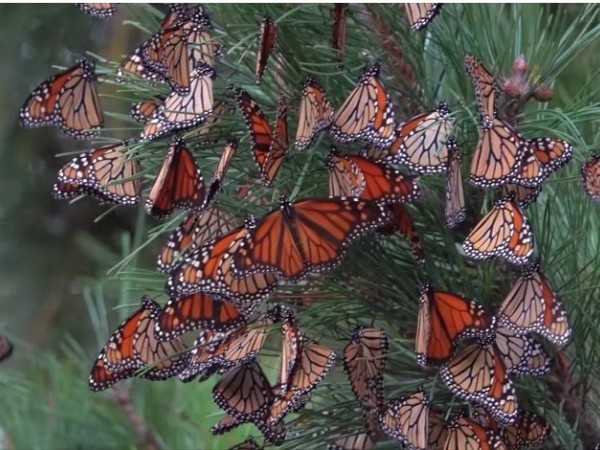