Note: Observations highlighted in this report are from October 9–October 17. To explore more recent observations, check out “The Leading Edge” section of the news update and explore our maps.

Excitement is in the air as monarch numbers grow at the California overwintering sites! Monarchs in Arizona, California and New Mexico continue to increase as they hurry on their way. Many observers report the largest numbers of monarchs seen in the last few years, an exciting grand finale giving renewed hope of an increased overwintering population.

Here is a sample of sightings reported this week as monarchs near the end of their journey.

Susan in Prescott, Arizona, saw five monarchs sweep through on October 9. “We have been fortunate enough this year to have at least a month long travel path thru the property. I counted 5 on this bush but they seem to be everywhere! So exciting.”

Exciting numbers of monarchs also appeared in Glenwood, New Mexico near the Western border of the state. Duke reported 60 monarchs on October 11 as a peak migration event. “On a hike on Mineral Creek, Catron County, NM, we saw at least 50, maybe more, adult Monarchs feeding on the rabbitbush and other flowers. They were mixed in with more Queens, but there were tons of Monarchs, up and down the canyon. Very cool to see.”

Cynthia in Stockton, California, spotted a single monarch on October 16. “This beauty was feeding in my backyard butterfly garden for a good hour. My last sighting was 2 years ago. Favored my cosmos and zinnias. I took a million pictures because sightings are so rare. He was pestered from time to time by my more common Gulf Frittilaries. Also, I kept a few praying mantis at bay. Finally, it seemed he had fed enough and was suddenly gone. So happy to be able to report this to you!”

Angela found one monarch on October 17. “Laying in the sun in the wet grass. 0900 sunny day near Goodyear AZ.”

Be sure to look at the explosion of new sightings on the Journey North Maps.

Monarch Numbers On the Rise in California!

Robert Pacelli is reporting good news at Pacific Grove. The count on Thursday morning grew. “Pacific Grove‘s monarch count this Morning revealed 2,593 monarchs in the ‘sanctuary’” Meanwhile an observer in Carmel noted a change. “The clusters here yesterday morning are not here this afternoon.  And few flyers compared to bunches from 9 to 3.  Maybe on their way to PG (Pacific Grove)?” Monarch movement is common this time of year as they first arrive. Stay tuned as new reports reveal more information.

Monarchs continue to arrive in good numbers this year at the California overwintering sites. While still small in comparison to much earlier years, counts are over five times higher than last year’s Thanksgiving Count and there are still more monarchs on the way. The Xerces Society reports, “On October 16th, 2021, over 1,300 monarchs were counted at the Pacific Grove overwintering site; this site did not have a single monarch butterfly during last year’s count. Pismo State Beach Monarch Butterfly Grove and an adjacent site tallied roughly 8,000 monarchs on October 20th, 2021; last year, these sites hosted less than 300 butterflies.

“Additional smaller estimates and observations from volunteers and the public have started to pour in from the Bay Area, Santa Cruz, Monterey, Big Sur, Ventura, Los Angeles and elsewhere, with numbers ranging from a few to dozens to hundreds, of monarchs. Altogether, there appear to be over 10,000 monarchs easily accounted for at the overwintering sites.”

More Monarchs Still on their Way

On our final night along the Colorado River, we watched monarchs fly in from the river in the late afternoon to find a night roost in nearby trees. Video here.

As morning dawned, we took one last walk to the water’s edge. There we found three shrubs in bloom, two Baja Fairydusters and one Mexican Bird of Paradise, and now covered with butterflies. We were delighted to see monarchs (and queens) slowly fly in from nearby trees to nectar and bask in the morning sun. Video here.

After refueling, they launched to the sky veering south along the Colorado River rather than West across the river to California. Where is their winter destination? Will we have tagged monarch recoveries perhaps in the Baja peninsula in Mexico from these southern flying monarchs or will they turn west and maybe be seen in California? Only time will tell!

When you are out for a walk keep a camera in hand to document any monarchs you see or that fly by. Include as much information as possible such as what the monarch was doing, feeding on, or any noteworthy find. Thank you for your support. Your contribution of data increases the understanding about monarchs. 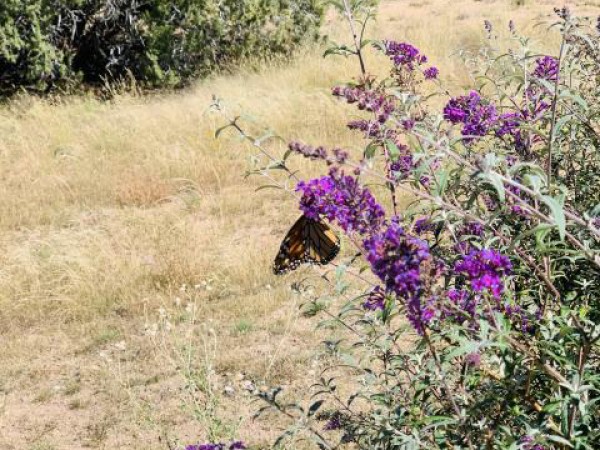 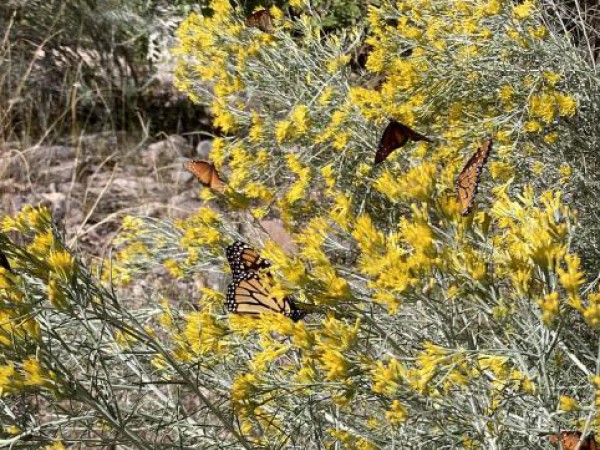 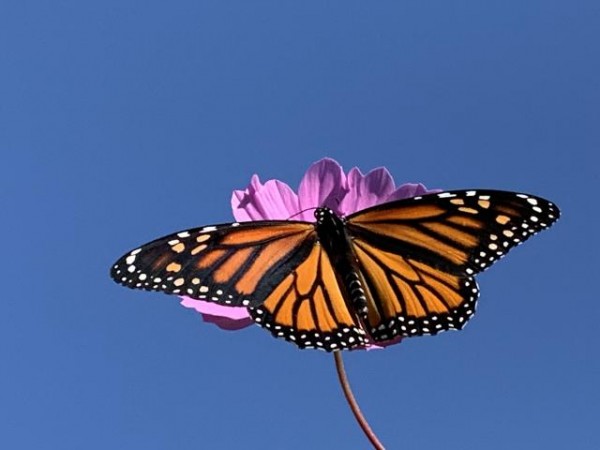 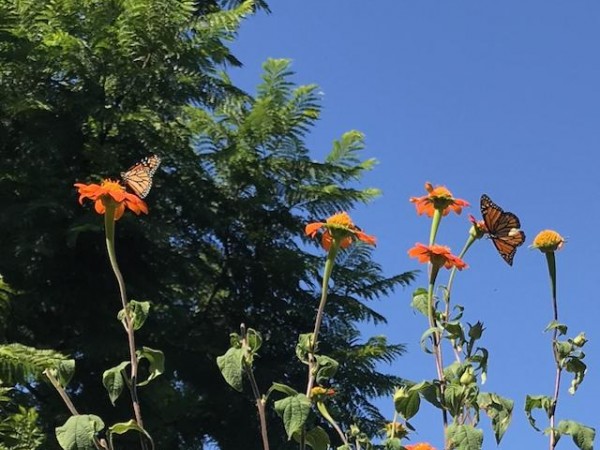 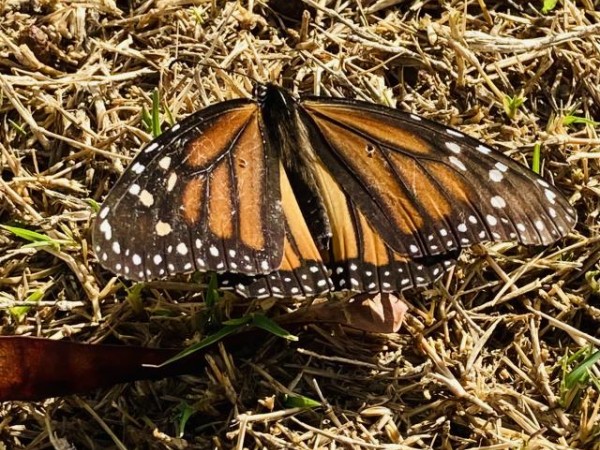 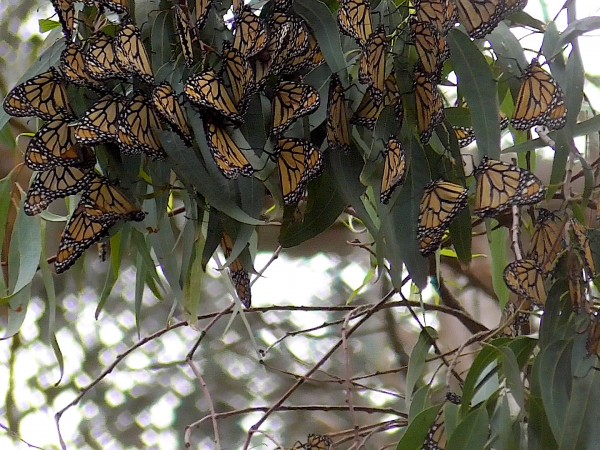