Note: Observations highlighted in this report are from October 16–October 27 . To explore more recent observations, check out “The Leading Edge” section of the news update and explore our maps.

The news is exciting – over 26,000 monarchs have already gathered along the California coast and more are on the way! This is especially hopeful as a major storm slammed the coast with high winds and rain last week, but monarchs found safe locations to nestle in the protective canopy of trees to ride it out. Meantime monarchs continued to move on good weather days in California, Arizona and New Mexico.

Here is a sample of sightings reported this week as monarchs near the end of their journey.

Lucille in Jenner, California, reported a monarch while hiking on October 16. “My husband and I were hiking on the scenic coastal trail at Stump Beach, in Salt Point State Park (N. California). It was a glorious mid-afternoon, warm and sunny with just a breeze. Suddenly, we saw a beautiful monarch butterfly fly in front of us at high speeds, heading north along the trail that follows the coastline! Wow - this is our 3rd sighting this past month, of a beautiful monarch butterfly, flying fast in front of us to an unknown destination, in totally unexpected locations! :)”

Steve found a monarch in San Simon on October 17, “only this one seen, about 1 PM, a male, nectaring. location approximate, along S. Fork of Cave Creek upstream from parking area,”

Della in Peoria, Arizona, spotted two monarchs on October 18. “On a windy Monday afternoon, I stepped outside my work building to see 2 Monarchs float by. Both looked to be very worn but I could not decide on genders. They were circling the Vitus Agnus Castus (Chaste tree) blooms but not stopping on them. They circled around and around and then took off flying higher over the building, south east. It was 83F and blustery.”

Cathie in Discovery Bay, California, spotted one monarch on October 26. “This may be the same female seen the day before.”

On the same day, David in Desert Hot Springs, California, noticed one monarch by his house. “1 monarch top of tree this afternoon.”

Reports are fluttering in from numerous sights that paint a different picture from last year. Diana Magor shares, “As you may know, we had a huge early storm last wknd, with 60mph winds and about 6” or rain in the Santa Cruz Mtns (4.6” in Santa Cruz). It wasn’t as bad in the Monterey peninsula, but they got lots of rain too, thank goodness! I counted 121 monarchs at Lighthouse Field on 10-26-21 at 10:00 -10:45 . Mostly in 5 loose clusters on E side of sanctuary basking in early am sun.  7 flying. At Scotts Valley (2 daily +eggs and larvae) and 8 at La Selva Beach, 10-3-21 which is a new (unreported) aggregation site. We also have a lot of butterflies eg: 10, flying around our neighborhood near King St and Escalona Dr on the West side of Santa Cruz,

An observer in a private neighborhood in Carmel counted 2,445 (plus or minus 10%) in 12 clusters in trees on his property on October 27. “The number in each cluster grew as the afternoon went on.”

Robert Pacelli watched the monarchs as the big storm rolled in last week. In the mornings monarchs stayed in the Eucalyptus trees. But when the winds began picking up, they quickly moved to pine trees that were easier to grasp for safety. Pacific Grove also experienced an uptick in monarchs after the storm. The Friday morning count at Pacific Grove reported by the Pacific Grove Museum monarch team was 9,544 monarchs! (Last week the count was 1,316 monarchs.)

After under just 2,000 monarchs last year overwintering at traditional sites along the California coast, the increase in monarchs gathering in California along the coast this year is amazing. Emma Pelton of the Xerces Society shares with us on Thursday, “While it is still early, there are signs of hope at the California overwintering sites, particularly along the Central Coast. Counts at Pismo State Beach and an adjacent site this week totaled nearly 20,000 monarchs! Additional reports from Pacific Grove, a private site in Monterey, and a site in Ventura total an additional 6,000+ butterflies. This puts the grand total easily over 26,000 monarchs and it is particularly welcome news after the recent “bomb cyclone” that hit the West coast. The 25th annual Western Monarch Thanksgiving Count begins on November 13th, so many volunteers up and down the coast are getting ready and hoping for clusters.” 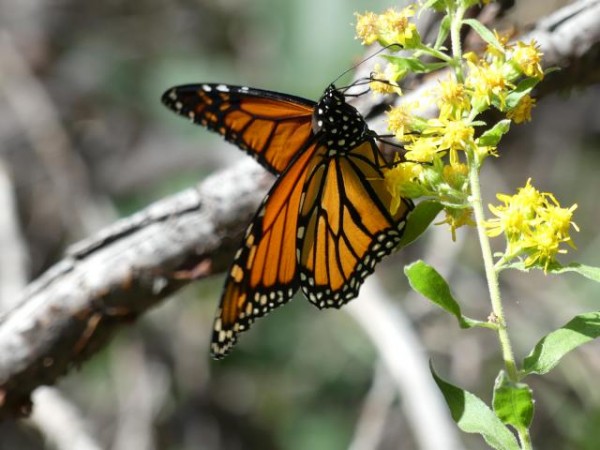 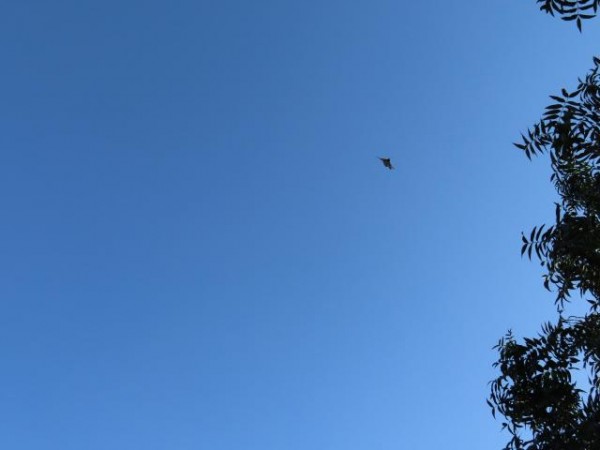 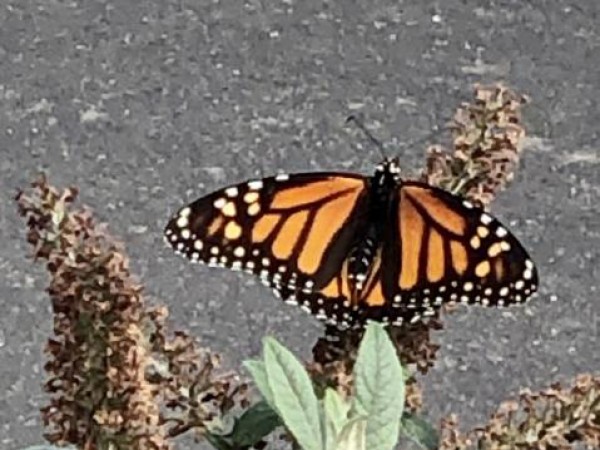 Top of the Tree 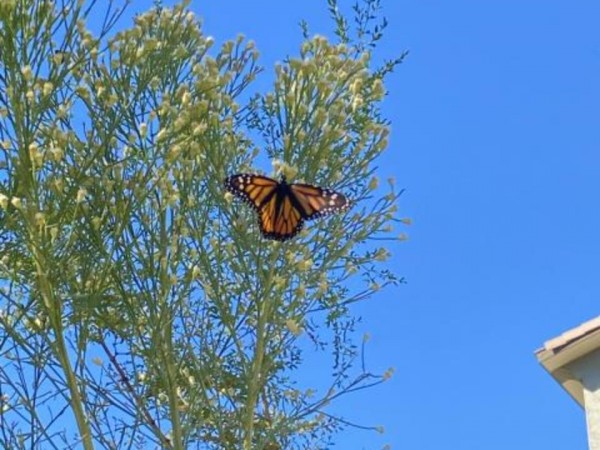 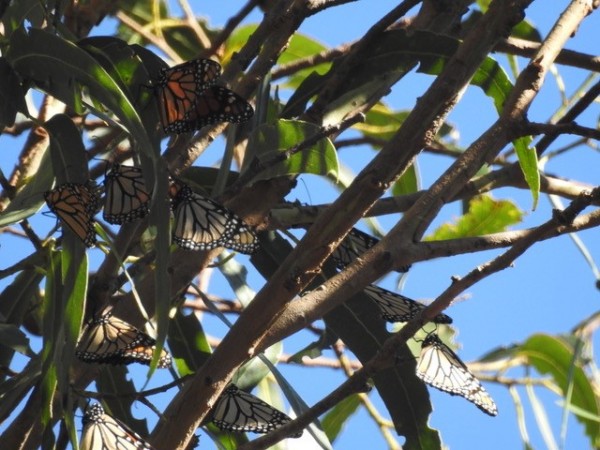 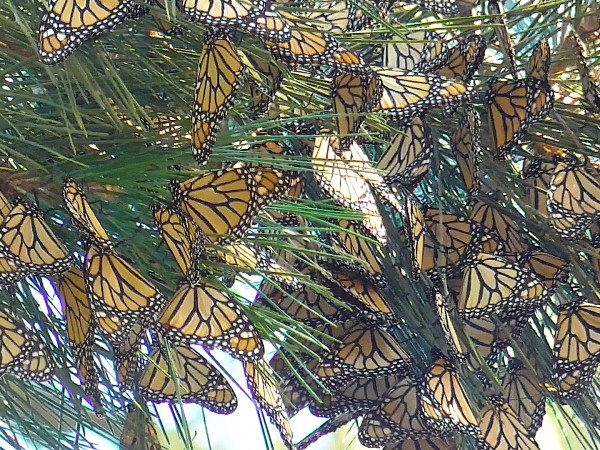 Moving to the Pines 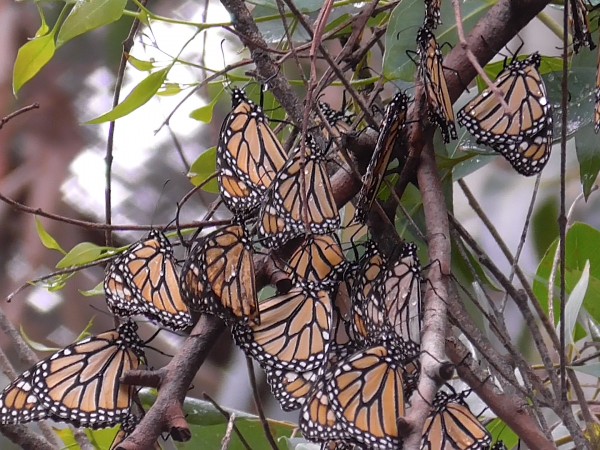