Our sanctuary is closed to visitors this season, and so we decide to film our first virtual tour, given by my sister-in-law Ana, who’s an experienced butterfly guide. When our 12-year-old nephew Alex finds out we’re going, he wants to come along. Then his younger brother Carlos wants to come too. As we are leaving our yard, their younger cousin Ahren runs after us shouting, “Tia! Can I come too?” We walk slowly to the entry to give Ahren time to throw cookies, fruit and water into a back pack, and then we start walking up the mountain together.

We begin by making time lapse videos of our ascent. Watching them as soon as we stop recording, our jerky cartoony movements crack us up. The videos make us look like we move fast, but we are moving slowly, especially me. It’s my first time doing this four-mile hike with a 2,000 ft elevation gain this season, and I’m the tortoise of the group.

The nephews are happy to dally, especially Ahren, who notices everything. “Look! a caterpillar!” I film its furry scurry across a mossy rock. “Look what I found, acorns!” I film them in his hands, happy for a moment to catch my breath.

At last, we enter a different microclimate, a cool and cloudy contrast to the hot, sunny hike up rocky switchbacks. Before we see the butterflies, we see Ana’s brother, Pato, a forest ranger, lined up with the Butterflies & Their People forest guardians to greet us. Each of the nine virtual tours we will produce this season answers one of our frequently asked questions, and for this episode, the question is, “Why do the butterflies come here?”

I start with Ana, and as often happens when I turn a camera on her, she collapses in a gale of giggles. Older sibling Pato, who’s also filming, gets stern with her. She gets it together and manages to say, “I think they come here because it’s protected.” The guardians, shuffling like nervous schoolboys and arguing about who will go first, take turns opining on this subject as well.

The didactic part over, we pull out our jackets and proceed to the butterfly trees. Despite the chill, the butterflies are flying around like crazy. Ana takes pictures. The boys pull out their cellphones too.

Ranger Pato leaves our group deal with an intrusive herd of cows and I follow. “Don’t film me.” He’s camera shy like his sister Ana. Then he relents. “Actually, go ahead, this is what I do.”

“Because they’ll scare the butterflies” he says, his face suddenly big on my cellphone screen as he passes me on the narrow trail.

Cows or no cows, the butterflies still seem scared. They are pouring off the trees and into the air, the colony seems to be dissolving before our eyes. The trees are young here, all recent reforestation, thinned out again by illegal logging.

This area that we call La Lagunita is part of Ejido Nicolas Romero. I train my phone on forest guardian Jose Carmen, who’s from that community, and ask why his neighbors cut trees. He pauses for a moment before explaining, “There’s no other work. They cut down trees so they can eat.”

The intensification of the rustling of butterfly wings overhead catches our attention. Eyes glued to an ongoing explosion, Pato remarks, “I don’t think they’re going to stay in this spot very long.”

On the way down, the nephews have already run ahead on the short cut, but Ana suggests taking the long way because it has more wildflowers. The side of original trail is indeed sprinkled with tiny effusions of white, yellow and violet that I stop to document. As we start the steep part, the high-pitched squeals of the nephews waiting below reach our ears just as we find our path blocked by a felled tree.

It’s an oyamel fir, it’s needles still bright green as if it were alive. As I crawl over it, I get resin on my hands that I won’t be able to get off until my shower back home. We find a tree stump next to the trail, one of four recent cuts. I film Ana’s reaction.

“It makes me sad to see this,” she says.

Ana is a smiley person in general, and she’s smiling as she says this. I make her do another take. “You can say it in Spanish if that helps.”

“Me hace triste.” She looks more serious this time.

Then I try to show the expanse of the toppled tree, but it’s like my camera is smiling too, failing to convey the enormity of yet another core protected area tree laid low, bleeding sap.

Once we are home and cleaned up, Ana comes over to chat with me in our back yard at sunset.

“What was it like doing a virtual tour instead of a regular tour?” I want to know.

“It’s more difficult,” she says. “I like to show people this beauty, to see people’s faces, to see their reaction. I don’t like this, there are too many cameras.”

I get it—I used to hate being filmed too. But a lot of my self-consciousness has gone by the wayside as I’ve gotten older. Now I know that it’s not about me; what we’re doing is in the service of something larger. In this season without visitors, we have been given the gift of time, the time to create things that can potentially reach more people. It’s my hope that these words, images and videos will lead to questions that move beyond the refrain, “the monarchs go to Mexico,” and into a more serious consideration of what happens after they arrive.

P.S. You can see a sneak preview of our virtual tour and listen to Ana’s infectious laugh here. And if you’re wondering about who the rangers and the guardians are, Will Wright and I wrote this piece on the history of forest conservation on Cerro Pelon.

Ellen Sharp is the co-owner of JM Butterfly B&B, located at the Macheros entry of the Cerro Pelon Monarch Butterfly Sanctuary. She is also the co-founder of Butterflies & Their People, a forest conservation non-profit that employs six guardians in the Cerro Pelon Sanctuary. Sharp holds a PhD in cultural anthropology from UCLA. More of her writing is available at ellensharp.com 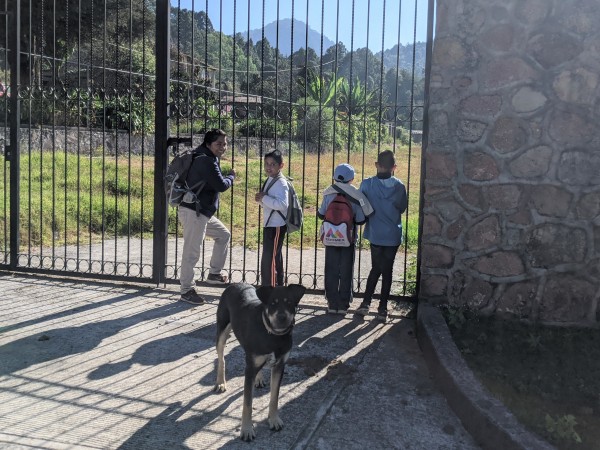 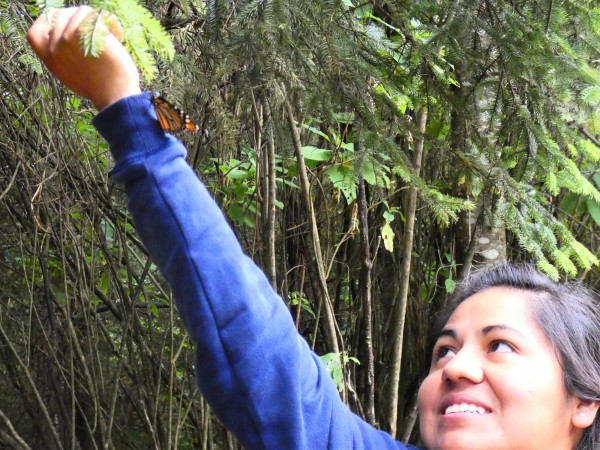 Ana Moreno With A Visitor 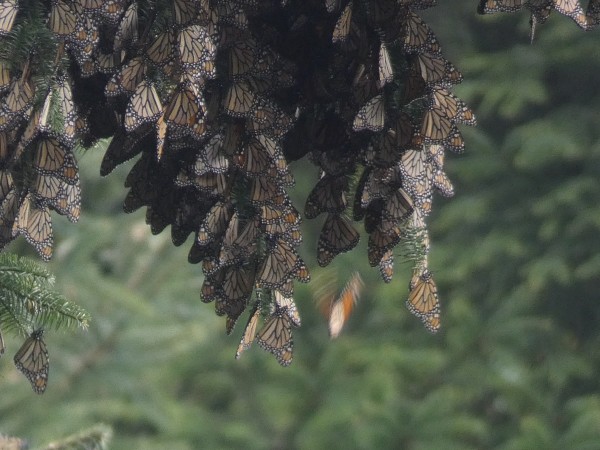 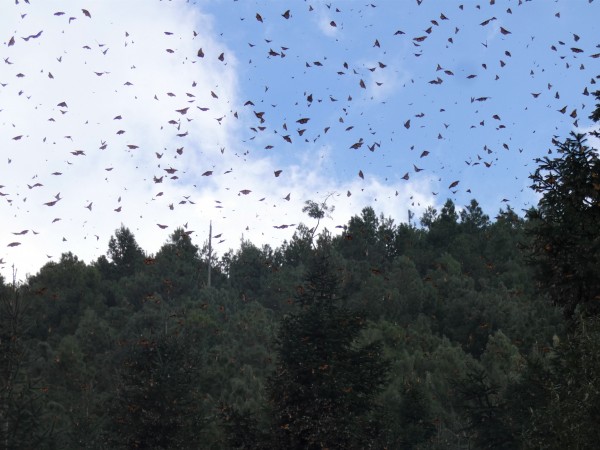 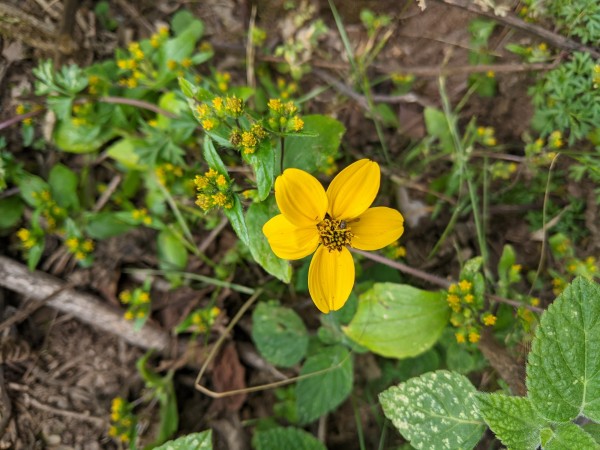 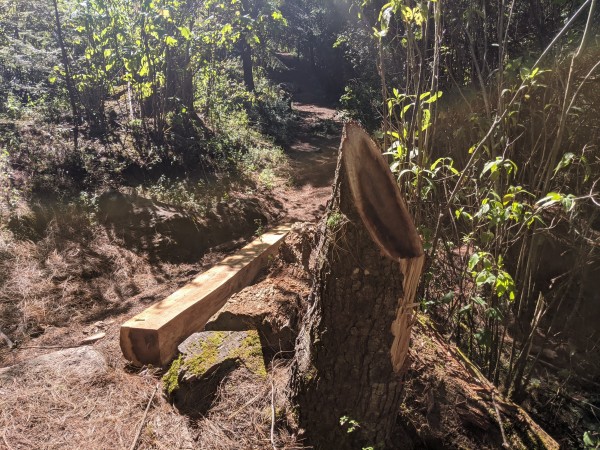