The Massive Arrival Is Simply Overwhelming!

Wintry conditions have hit the northern states of México with temperatures ranging from 2  to 6 degress Celsius. Yet, despite the chilly and foggy weather conditions in our region, Monarch Butterfly Sanctuaries officially opened last Saturday on November 16th. With the announcement, there was a burst of festivities, color, excitement and celebration by local communities and outsiders!

Monarchs have finally reached their overwintering areas at the Oyamel spots in their three main Sanctuaries, “El Rosario”, “Sierra Chincua” and “Cerro Pelón” at nearly 10,000 ten thousand feet altitude in these mountains of Central México.

While driving up the road, visitors marvelled at the fantastic spectacle of seeing waves of hundreds and hundreds of powerful, energetic Monarchs. People stopped every few meters. The Monarch flight could be easily confused with the flight of birds and bats as the monarchs chose which of the three Sanctuary to roost. The majestic mountains practically stand face-to-face with one another.

“We are so glad another season is starting! Grandpa and grandma say have seen the Monarchs here in the forest since they were little children by the millions, making the forest dark. Grandpa and grandma never imagined that the monarchs would be so important to the world and to nature. We now know we have a treasure in both the Monarchs and our Oyamel forests!”, said Ramiro (age 9) and Genaro (age 13), both part of the El Rosario community.

The weather bringing still a little rain to our region might compensate for the rather late and at times scarce rain we had over the season. Humidity levels might rise which is needed by Monarchs as well as other insects in our forests over the spring.

Leonardo, grandchild of a Ejidatario family, is doing his debut as a tour guide in the Sanctuary.  “I am so glad to know that I will spend the next 5 months with my family and being a guide here. My visitor guide and Monarch training is so inspiring and has made me proud of my homeland,” Leonardo stated.

Once at the core of Sanctuary “El Rosario”, the largest of all three in population, we could hear from the guides there: “Monarchs have not yet concentrated totally in their traditional and definite spots, “Las Balsitas” and “Los Orcones”. Many are still flying around and occupying surrounding areas, and others, maybe because of the bad weather, might have not even arrived. We will see the final numbers for sure by end-December”

Due to the intense fog and light rain, our camera could not catch the silhouette of several big and heavy clusters hanging in a few trees, and many medium to small others in many more trees.

Many Mexican families with their children and visitors from other countries, attended the grand opening and would simply elicit expressions of admiration at the mystic atmosphere experienced at what promises to be an extraordinary and an exceptional season this year! 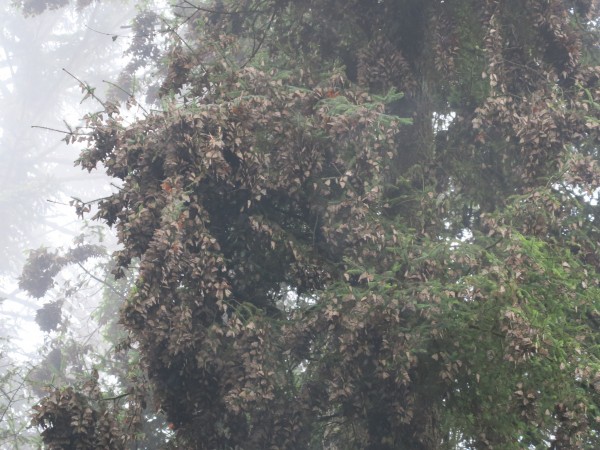 A Tree Heavy with Monarchs 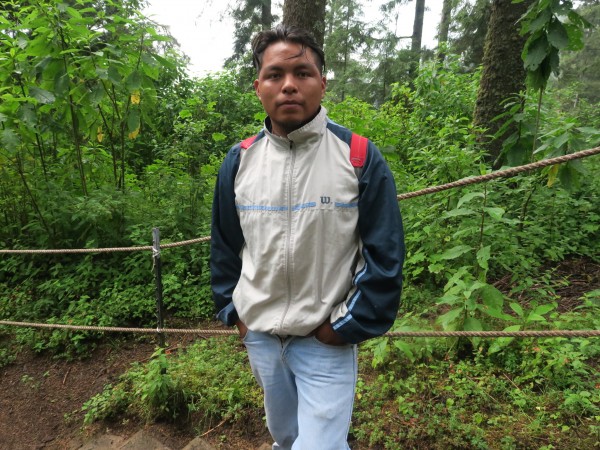 Leonardo, grandchild of a Ejidatario family, on his first day as a sanctuary tour guide
Photo by: Estela Romaro 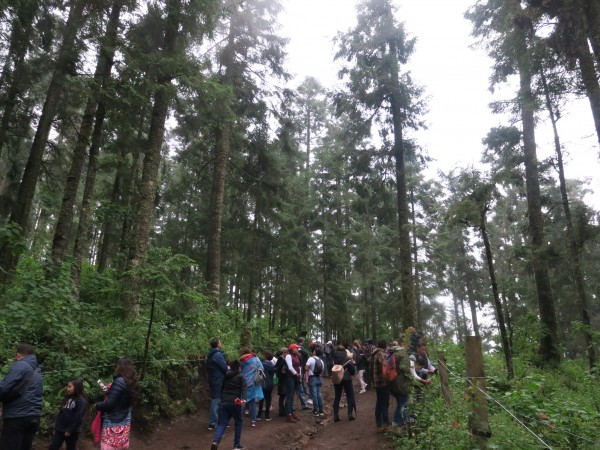 …From near…
Photo by: Estela Romaro 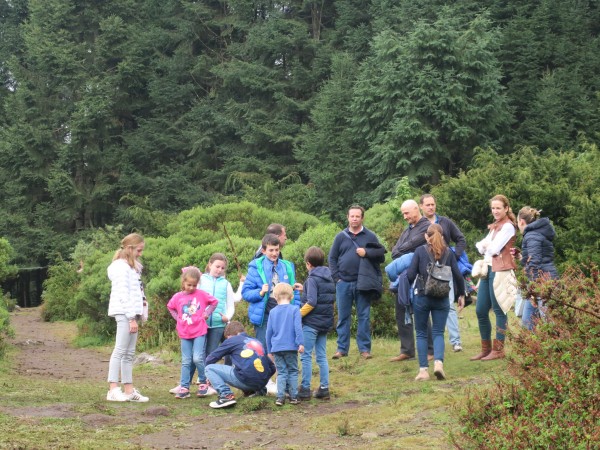 …And far…
Photo by: Estela Romaro