Signs of the Season!

Monarchs in the Deserts

As Thanksgiving approaches, monarchs are racing to their overwintering homes. Many have already arrived but others are still present in the lower deserts. They’re faced soon with a decision: Continue to fly or stay where they are as their urge to migrate wanes in early December.

Monarch sightings flourished in the lower deserts of Arizona in November as they hurried on their way. Patty in Tempe found monarchs flying through her yard on November 14:

“Female monarch that was floating in pool yesterday afternoon and held overnight appears to be fine. Released her this morning onto Desert Milkweed [A. subulata] in my yard. Also saw a male Monarch flying around our yard this morning.” Link to sighting

Patty also tagged some of the monarchs visiting her yard in November and is finding that a few monarchs leave and return a few days later to nectar rather than migrating.

Last week, Laura and I decided to camp along the Colorado River, the boundary between Arizona and California. We go every Fall to watch for monarchs on their migration. We’ve learned over time many monarchs use the Colorado River as a migration flyway but late in November some monarchs decide to spend winter there as well if it is too late to reach the California and Baja peninsula overwintering sites.

Several years ago we found small groupings of 8 – 12 monarchs in pine trees in Lake Havasu and 10 to 20 monarchs scattered nearby in Willow Acacia (Acacia salicina) trees in Parker. But this year the monarch sightings in western Arizona were much lower than usual during the migration. We were curious what we would find.

Laura quickly spotted two monarchs flying in the Acacia trees shortly after arriving at our camp on Sunday, November 17. The acacias were in bloom and a favorite nectar source and a perfect “bed and breakfast” resource for migrating monarchs in the area. She also observed the following monarch behavior.

“One monarch was feeding on the Acacia flowers but the other monarch was chasing a painted lady butterfly away nearby.”

One question we always try to answer this time of year is to determine how many monarchs are breeders or nonbreeders. A male monarch chasing other butterflies or birds often is a sign of a breeding monarch defending its territory. Nonbreeders tend to be non-aggressive and feed leisurely on nearby flowers or stay in trees.

Monday morning, we jumped in the truck and drove up to Lake Havasu City, about 30 miles north. We were hoping to see small numbers of monarchs in nearby Aleppo Pine trees in a park along the river. Laura and I spent several hours searching the area and walking nearby trails looking for monarchs in the trees they’ve used in the past or visiting flowers. Over two hours we observed one lone male monarch in excellent condition in the pine trees. He mainly stayed in the tree and only occasionally would fly to a nearby palm for a short time only to return to the pine tree near the same location we originally spotted him. After several hours of monitoring, Laura and I were ready to leave when Laura shouted out,

We verified the male monarch was still in the pine tree and watched the female for about 30 minutes feasting on the native milkweed nectar and also laying eggs before she flew off to the south, stopping to visit nearby milkweed on her way.

When we returned to our campsite in Parker, we sat outside with our families after lunch and compiled our observations from our stay. The Colorado River makes a sharp bend, creating a small peninsula. Laura was the first to notice the orange wings flying high overhead!

“Monarch flying south at the top of the tree tops!”

That first sighting was at 1 p.m. Before the sightings stopped an hour later, we counted six more monarchs flying overhead, taking a short cut over the land and back to the river. A wonderful few days observing monarchs along the Colorado River in Arizona!

Monarchs appeared along the coastal regions in California during November as well. Liz in Manhattan Beach found monarchs in a nearby tree in Southern California on November 22.

The annual California Thanksgiving Count is now in progress and early indications are the news is good! Several overwintering sites are already hosting more monarchs than last year, a sigh of relief after the all-time record low numbers reported last year. At a few of the California overwintering sites known for their larger monarch populations, you can now track the number of monarchs arriving in real time as the counts progress. Follow the Xerces Western Monarch Count Resource Center for “live” coverage.

Thank you to the many observers who reported sightings in the West this Fall season! The Southern tier of the West often sees monarchs all winter. Please continue to report all adult monarchs as well as eggs, larvae and pupae so we can learn more about these individuals. Also look for small aggregations of monarchs in trees – especially check the southeast sides of trees, where monarchs like to warm in the morning sun if a nectar source is nearby. Help us all learn more about monarchs in the West in winter! 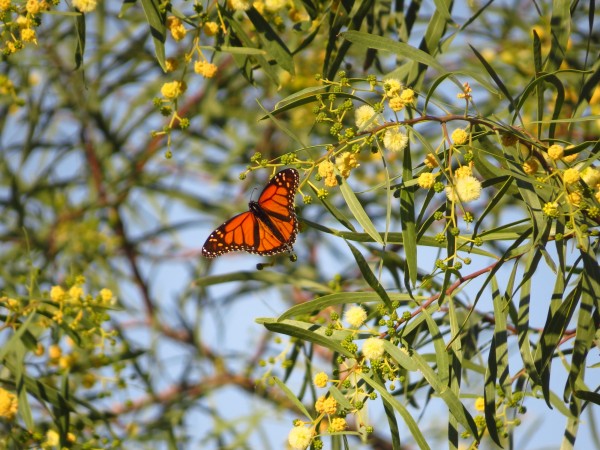 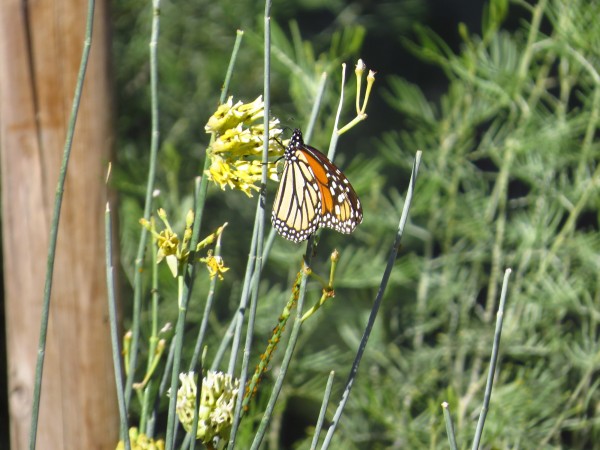 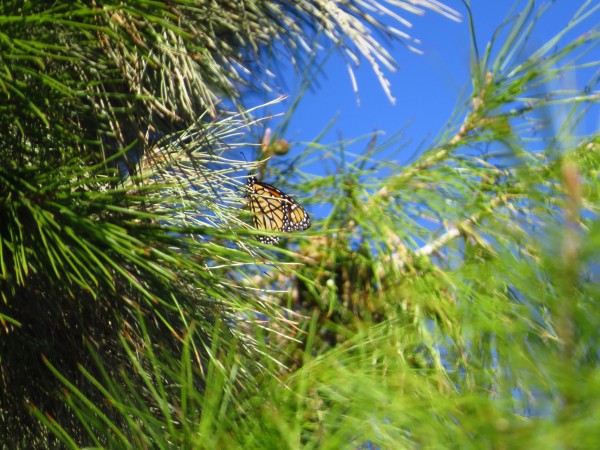 One Lone Monarch in Aleppo Pine 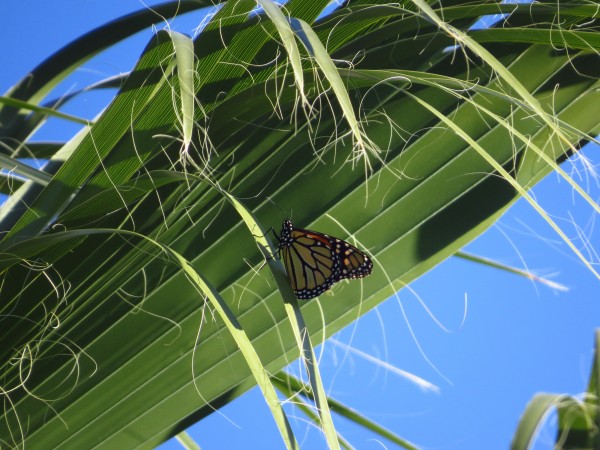