Q. How big is the monarch butterfly?

A. Monarchs have bodies that are about 10 cm wide (including their wings).

Q. How much does a monarch butterfly weigh?

A. Monarchs weigh, on average, about half a gram. This can vary from about .27 grams (a very small monarch!) to about .75 grams (a very big monarch!)

Q. How do you tell the male monarch from the female?

A. Males have a small spot on the inside surface of their hindwings that is not present in females. The ends of their abdomens also look different. Females tend to look slightly darker than males, and have slightly wider wing veins. If you were standing here next to me, I could show you these differences more easily than I can explain them - I’d recommend looking at some pictures!

Q. How come only male monarchs have a big black spot on their wings?

A. These dots are made of specialized scales that, in some butterflies, emit a chemical used in courtship. Even though this chemical does not appear to be important in monarch courtship, the males still have the spots. The spots are much larger on close relatives of monarchs.

Q. Why do the females have thicker wing veins?

A. I don’t know. This is a good question! It’s possible that insect physiologists know the answer, but not me.

Q. Can they fly in the rain?

Q. How do Monarchs keep dry if it rains, and how do they dry their wings and what happens to them if they get wet?

A. When it’s raining, monarchs do not fly. Butterflies in my experimental cages hold onto the sides of the cages until it stops raining. In the wild, they hold onto trees or bushes. If wet monarchs get knocked off these perches, they sometimes get stuck on the ground. If they’re too wet, they can’t fly because their wings are too heavy. However, monarchs do not need to stay completely dry. If they do get wet, they simply remain still until the water evaporates off their body. They often bask in the sun to dry their wings.

Q. Since the wings are thin how come they don’t wear out?

A. They are thin, but they are very strong. They do wear out, though, and can be torn or damaged during the butterflies’ lives. I’m amazed at how worn some of them look, with nicks, tears, scratches and worn spots. We saw some butterflies in Mexico that were missing over half of their wing area, but could still fly. I don’t think they will make it very far north on their spring migration, though!

Q. About how many scales can fall off before the monarch has to stop flying?

A. Monarchs can fly after they’ve lost a lot of scales! However, they probably can’t fly as efficiently when they’ve lost significant numbers. But, if you’re asking for an exact number, I have no idea!

Q. How should we handle the wings?

A. Monarch wings are pretty sturdy, so as long as you aren’t too rough with them, they should be fine. From my experience, monarchs don’t lose scales as easily as many other butterflies and moths, and can be handled without causing much scale loss.

Q. How many times do their wings flap in a minute?

A. About 5 to 12 times a second, so about 300 to 720 times a minute. (This is actually quite slow compared to many other butterflies.)

Q. Why do they fly like they’re dizzy (referring to erratic flight)?

A. I have seen these flight patterns in many contexts. In some cases, monarchs fly in erratic patterns when they have been threatened, especially after I try to catch them with a net! Males and females sometimes fly erratically during chases, when the male is trying to catch a female to mate with him, and the female is trying to get away. There are probably many explanations, but I think that predator avoidance and sexual chases are probably the most important.

Q. What kind of tags are used on the butterflies, so as not to weigh them down?

A. We use small (less than 1 sq. cm) stickers that are applied with a thin layer of glue. These are light enough that they don’t interfere with the butterflies’ flight. It’s kind of like you wearing a shirt, which doesn’t interfere with how fast you can run.

A. The larvae respond to loud noises, so I guess they can hear, or at least sense air vibrations. Hearing is probably not an important way for them to learn about their world, as it is for us. They sense the world mostly through smell and vision.

Q: How do monarchs breathe?

A. Monarchs breathe through tiny openings on the sides of their bodies called spiracles. (The spiracles are in their cuticle, like our skin). The holes open into a system of tubes in their body (called trachea) that carry the oxygen all over their bodies. They don’t have lungs. This is different from the system that we and other mammals have. We breathe air into our lungs. Special cells in our blood pick up the oxygen, and the arteries of our circulatory system carry oxygen to the rest of our body.

Q. Do monarchs breath in their chrysalis, and if they do, how do they? If they don’t, why don’t they need air?

A. The pupa “breathes” just like the larva and adult, through tiny holes in the side of the abdomen and thorax called spiracles. The reason that I put quotes around the word breathes is because this is very different than the kind of breathing you do. The air goes into these holes and through a whole series of tubes in the body called trachea. The trachea carry oxygen throughout the monarch’s body. They don’t have lungs.

Q. Do monarch butterflies have brains?

A. Yes, they do. All insects have brains. Just like our brains, their brains receive messages from the rest of the body, and send messages to the muscles and other organs in the body. They are relatively smaller than our brains, though.

Q. How do monarch butterflies excrete?

A. The purpose of excretion is to keep a constant level of salts and water in the haemolymph, or blood of the butterfly, and to get rid of toxic compounds that are produced during metabolism. Adult monarchs do this using a system of tubes called Malpighian tubules, which are found throughout the body. These tubules pick up materials from the haemolymph, and then carry them to the rectum of the butterfly. All of the materials that the butterfly doesn’t need, or would be harmful to it, are then concentrated in a liquid form.

Q. Can butterflies overheat if it gets too hot?

A. Yes! Butterflies of many species need to avoid extreme heat, and have many strategies for doing so. Monarchs retreat to shady places when it’s very hot.

Q. At what temperature is it too cold for monarchs to fly?

A. We generally assume that monarchs can fly if it is above 60 degrees F, and above 50 degrees if it is sunny. The sun allows them to warm their flight muscles enough to fly. I’m not sure of the lowest temperature ever records, but these temperatures seem to be accurate representations of monarch flight ability in my experience.

Q. Is it true that monarchs can only see one color?

A. No, butterflies have the broadest visual spectrum of any known animals, and can see more colors that you can! They can see UV light, which humans can’t.

Q. Are butterflies nocturnal or diurnal?

Q. Do monarchs sleep or do they just rest?

A. Sleep is a funny thing. Monarchs are inactive when it’s dark, but they can’t shut their eyes, because they don’t have eyelids. Do you think they sleep? How would you tell?

Q. Where do they go and what do they do at night?

A. They remain still at night, probably on vegetation like bushes and trees, but as far as I know, no one has done a detailed study that involved finding monarchs at night.

Q. How do their internal clocks work?

A. We don’t know exactly. Can you think of a good way that they should work to allow the monarchs to do what they do?

Q. Do monarchs communicate with each other? How? What kinds of things would they communicate about? Is anyone studying their communication?

A. There is a great deal we have to learn about how monarchs communicate. We know that at roosting sites they communicate through their coloration—by opening and closing their wings, they seem to be saying, “Don’t land on me”. It is also suspected that the male monarchs communicate with the female monarchs by emitting a scent, referred to as a “pheromone.” In a famous experiment, Dr. Fred Urquhart placed twenty living monarchs in fine nylon bags and hid them behind clusters of leaves on the branches of trees. Within 20 minutes, free-flying migrants approached the trees, with some resting on neighboring branches. A few flew into the cluster of leaves to come to rest on the nylon bags. He concluded that monarch butterflies do communicate in some manner as yet unknown. 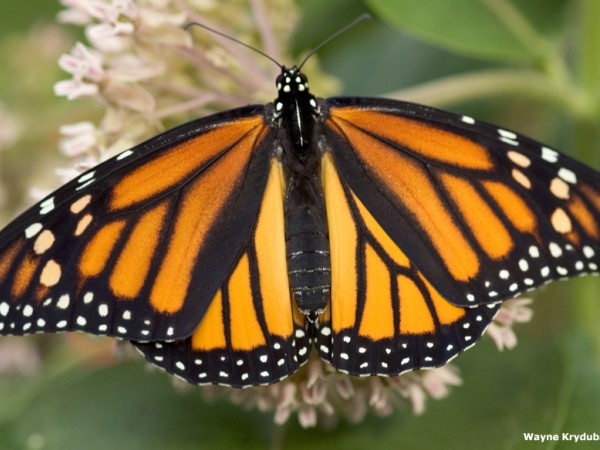