A. This depends on when they live (summer or winter). It also varies a lot among individuals (just like it does it humans). In the summer, adults live from 2 to 6 weeks in captivity, and probably about that long in the wild. The ones that migrate live longer, from August or September to about April (although a lot die before this). When people hear this, they say they’d rather be a migratory monarchs, but these butterflies probably face many more risks, and are likely to have a smaller chance of getting offspring into the next generation. These times I told you only refer to the adults. It takes them about a month to go from the egg to adult stage, so we should really add four weeks to those times. After all, we count human childhood in the human lifespan!

Q. How many inches are the eggs of a butterfly?

A. They are about the size of a pinhead. How many inches is that?

Q. How many eggs do monarchs have at one time?

A. They only lay one egg at a time, but they can lay many in a single day. (The most I’ve seen is 205 in one day, but this is very unusual.)

Q. What is the most eggs a monarch has ever laid?

A. I have no way of knowing how many eggs wild females lay. However, I have studied fecundity (number of eggs laid) by captive females, and they highest number I’ve seen was 1179. The average is about 700, but this varies from year to year. They lay fewer in hot, dry summers.

Q. Do the butterflies die after they lay their eggs?

A. No, they don’t. Adult monarchs live for anywhere from 2 to 6 weeks, and females lay eggs and males mate throughout most of this period. (Assuming that they aren’t in the generation that migrates.) They die when they get “old,” just like people do. In many cases, females still have eggs in their bodies when they die, so they don’t always get a chance to lay all of their eggs.

Q. How do they know which plant is a milkweed?

A. They use a combination of visual and chemical cues to find milkweed. Once they land on a plant, they use sensory organs on their feet and heads to tell them if it is a milkweed, and probably the quality of the milkweed.

Q. Can a female monarch have babies without the help of the male?

A. No, a male and female monarch must mate before the female can lay fertile eggs.

Q. If the female mates and is ready to lay her eggs and can’t locate milkweed plants, what does she do? Does she lay them on any plant she finds? If that is so, what becomes of the caterpillars?

A. Females will wait a long time to find milkweed. Sometimes in our cages we keep mated females without milkweed, and VERY rarely, we will find a few eggs on other plants or the sponges we use to feed the females. The caterpillars then die. That’s a bad situation for females to be in, and their reproductive cycle is closely coordinated with their environment so that it doesn’t happen too often. We have done studies here at the University of Minnesota of females that were overwintering in Mexico. The studies have shown that having milkweed around actually speeds up egg development.

Q. How long are the caterpillars (larvae)?

A. They grow from being less than 1 centimeter (cm) to about 5 cm.

Q. Can you tell the difference between a male and female monarch when they are in the larval state?

A. Only if you dissect them and look for the male’s testes. In some butterfly species you can see these testes from the outside, but not monarchs.

Q. How do the gold spots on the chrysalis form?

A. We don’t know just how they form, or what their function is.

Q: Does any structure of the caterpillar survive in the chrysalis? Is it a gelatinous mass?

A: While the popular metaphor of “pupa soup” or “gelatinous mass” composed of broken down larva body parts is often used, this is a gross oversimplification of an amazing process. At no time between egg fertilization and death do all body parts break down. Some do, but many don’t. Many of the features unique to the adult—such as the wings, eyes, internal reproductive organs, and long antennae—are actually present as tiny clusters of cells even in the egg. These cell clusters grow and differentiate throughout the larval stage. During the pupa stage, they rearrange and develop further.

In some cases, the cells that will form the adult structure are present in the larva stage, but they don’t start developing until the pupa stage. For example, the adult compound eye forms from cells that were behind the larval eyes.

Some body parts, especially muscles, degenerate at the end of the larval stage and are replaced by new muscles that allow the new kinds of movements associated with the adult stage. Larvae move very differently than adults, and thus most of their muscles are completely broken down by enzymes early during the pupa stage. These broken down muscles do form a liquid within the developing pupa.

Q: Does the skin of the chrysalid play a significant role in the formation of the wings and other organs?

We have been “raising” monarchs in our yard for about 12 years. I try to video the whole cycle. I notice that, during the first week of a chrysalid, it looks like it is empty, except at the top. This is why I have always wondered if the skin, itself, of the chrysalid, plays a significant role in the formation of the wings and other organs. I think this because of the immediate visible pattern of the wings, etc. on the skin. It appears that the wings grow from the skin inward. Is there a lining against the inner skin that begins to form the wings?

A: The skin (or exoskeleton) of the chrysalis is shed, in a way similar to that in which the exoskeleton of each of the previous larval instars is shed. While it may appear that the wings and other organs grow from the skin inward, they are actually present in the larva, and grow continuously in the last larval instar. During the wandering stage (after the larva has stopped eating), the tracheal system that fills the wing veins develops, and as the larva pupates, the wing assumes the shape that it will have in the adult. The inner layers of the pupal exoskeleton, just like the inner layers of the larval exoskeleton, does break down before the butterfly emerges (that’s why it looks thinner at the end of the pupal stage) and some of its component nutrients are used by the developing butterfly, but the wings are not actually part of the exoskeleton.

Q: Can cold temperatures cause monarchs to emerge with deformed wings?

We are in Louisiana and trying to have monarchs breed all winter. Some of the monarchs are emerging but their wings are slightly bent. Is it because it is cold? There are still a couple of chrysalises that look healthy, but most don’t.

A: It’s possible that the cold temperatures are causing the deformed wings; temperatures that are outside of the optimal development temperatures (either too cool or too warm) can cause problems for the developing butterfly. However, if you are breeding monarchs year around, you definitely run the risk of having the protozoan parasite Ophryocystis elektroschirra (OE) infect your monarchs, and OE also can result in deformed wings. You should definitely check, especially if your pupae don’t look healthy. To find out how to have your monarchs tested, you can go to the website www.monarchparasites.org. This project is a citizen science project run out of Dr. Sonia Altizer’s lab at the University of Georgia.

Q. When the newly emerged adult monarch pumps fluid from the abdomen into the wings, does the fluid remain a liquid in the veins or do the veins of the wings become solid after awhile?

Q. How does a monarch butterfly know how to fly right away when it hatches out of its chrysalis?

A. Instinct. Unlike humans, insects don’t have to learn much. They are genetically programmed to do things like fly, find food, and migrate (in the case of monarchs). In some ways, this sounds like a great thing. However, there isn’t as much flexibility in behavior for organisms that depend on instinct. We need to learn how to talk, walk, read, etc, but think of the flexibility we have in determining what we do with our life. Insects don’t have that.

Q. Is there any difference between chrysalid and a chrysalis?

A. No, they’re the same thing. Both of them mean the pupa stage of a butterfly. I’ve always thought that people said ‘chrysalid’ because it’s easier to make this word into its plural form (‘chrysalids’). I’ve never known how to make ‘chrysalis’ plural, so I usually just say ‘pupa’ and ‘pupae’! I think you should write a poem about all of these words!

Q. How is the gold formed in a chrysalis and why?

A. We don’t know why. The color itself comes from cardenolides in the milkweed that larvae eat.

Q. What happens to all of the butterflies who do not mate? Do they die sooner or live longer?

A. I’ve done some experiments studying just this question. I thought that males that didn’t mate might live longer, since they weren’t transferring materials to females in spermatophores. However, there were no differences in two experimental groups: males that were kept with females and allowed to mate naturally, and males that were kept in a cage without females. I have also seen no difference in females. The only monarchs who don’t mate in the wild either die before they have a chance to mate, or never are successful in finding a mate. We don’t think that any monarchs are in reproductive diapause their entire lives, unless they die before the end of the winter.

Q. What percentage of monarchs make it to the migratory stage?

A. Monarchs go through 4 or 5 generations each year, and only one of these migrates. The migratory generation is the last one of a year, so it is probably the largest generation, however. It is also probably the one that has the highest mortality before it reproduces, but we don’t have good data on this.

Q. We understand that the monarch shuts down the reproductive cycle before migrating to Mexico. How does this happen?

A. The monarchs that will migrate to Mexico do not mature completely before they migrate. Even though they look just like normal adults, they are not sexually mature. They are sort of like a juvenile, or pre-puberty, person. This happens at some point while they are developing as larvae and pupae, when they are exposed to shortening days and cooler nights.

Q. What starts up reproduction again in Mexico, before the butterfly migrates in the spring?

A. When the butterflies are exposed to lengthening days, and possibly warmer temperatures, their reproductive organs begin to mature.

Q. When rearing monarchs, what do you recommend for a cage?

A. I really like the 2x2x2 foot cages that Bioquip sells. Or, you could make your own cage (check out the directions in our curriculum guide). We make cages in our lab from plywood and screen that work pretty well, and the directions for these are in our guide. You just need to be a little handy with a staple gun, sewing machine, and screw driver! 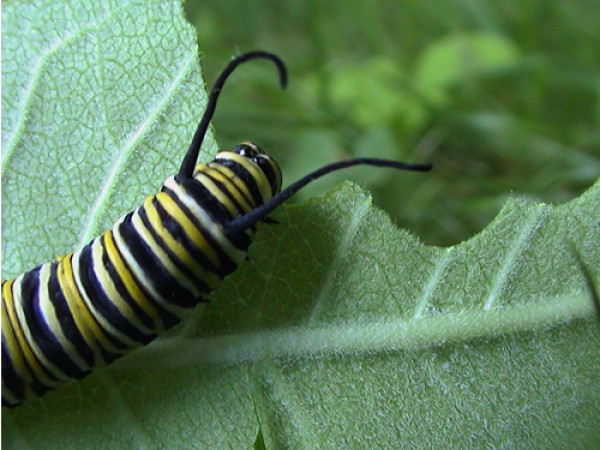