Every fall around Thanksgiving since 1997, teams of citizen scientists and biologists visit close to 200 monarch roosts along the California coast. This Thanksgiving count known as the Western Monarch Thanksgiving Count (WMTC) is organized by the Xerces Society which trains and provides the study methods for these teams as they fan out along the coastal overwintering roosts to count monarchs. To help better understand how the monarch population changes throughout the overwintering season, the Xerces Society initiated a Western Monarch New Year’s Count (WMNYC) in 2016. For the WMNYC initiative, volunteer citizen scientists and biologists monitor monarch roosts during the three weeks surrounding New Year’s Day. Both of these massive efforts provide important snapshots of the health of overwintering monarch populations.

This year, as the field data rolled in from the Thanksgiving (WMTC) counts across the region, everyone became alarmed. The monarch population at most roosts has dropped significantly from earlier years. Final tallies reflect an historic plunge in the number of monarchs overwintering in California this season. In 1997, the WMTC study estimate a population of 1,235,490 overwintering monarchs. Shockingly, in 2018, the WMTC study found only 28,429 overwintering monarchs. Likewise, New Year’s (WMNYC) count reflects a similar plunge in population figures. The volunteer teams counted only 15,358 overwintering monarchs. There are several likely factors. The Xerces Society noted stressors such as habitat degradation and loss, pesticide usage, climate change as well as related factors.

A Colony In California

The Monarch Butterfly Grove at Pismo Beach, California, is one of several overwintering locations that has historically hosted large numbers of monarchs during the winter months. Every fall when monarchs return, trained docents greet visitors and offer tours through the grove pointing out monarch clusters and notable activity each day. They also offer educational talks to help everyone learn more about Western monarchs and set up scopes for visitors to have the opportunity to see the butterflies up close. The monarch population at the Monarch Butterfly Grove at Pismo Beach is one of many locations that saw a drop of the monarch population this year. In 1998, the Pismo Beach overwintering roost had an all-time high of 115,100 monarchs. In 2017, volunteer teams counted only 12,284 overwintering monarchs. In 2018, the count was even worse—volunteer teams counted only 3,082 overwintering monarchs.

Pismo Beach Monarch Butterfly Grove Docent Chair Jan Ojerhom reports “over four inches of rain the last couple of weeks. The first time it rained, all the butterflies left the grove, but fortunately, when nicer weather once again appeared, they returned, but to a different location within the grove.” The monarchs left the grove again with the next storm. “This time when they slowly flew back to the grove, they found a third location to cluster.” The monarchs seemed restless, looking for the perfect place in the sheltered habitat for protection from the wind and rain. A few years ago, three trees fell during an intense storm period. Could the opening in the protective tree canopy make them leave the grove more frequently now in storms?

Hope for the Future

Let’s follow monarch population movements in the West. Periods of abundant rains this winter in parts of the Western range bring hope for lush, healthy milkweeds and abundant nectar along their spring migration routes. We are all hoping for a good breeding season and a population rebound. As the monarch story unfolds, we’ll keep you updated as we receive new reports in the West. 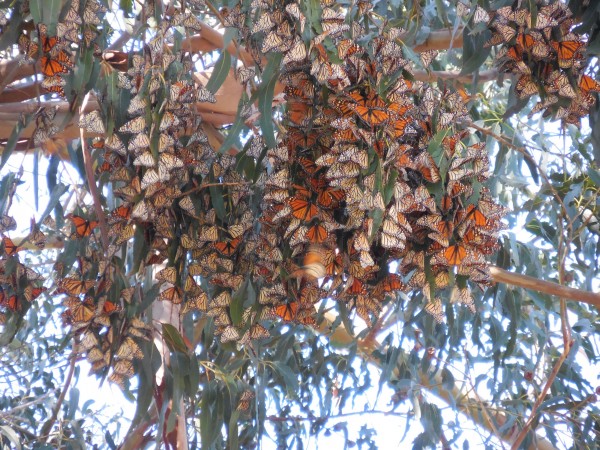 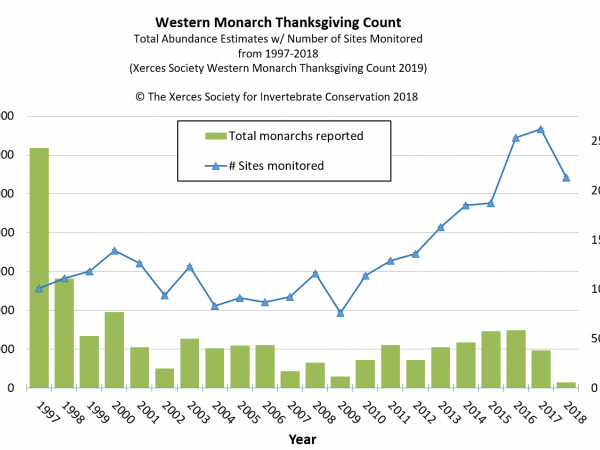 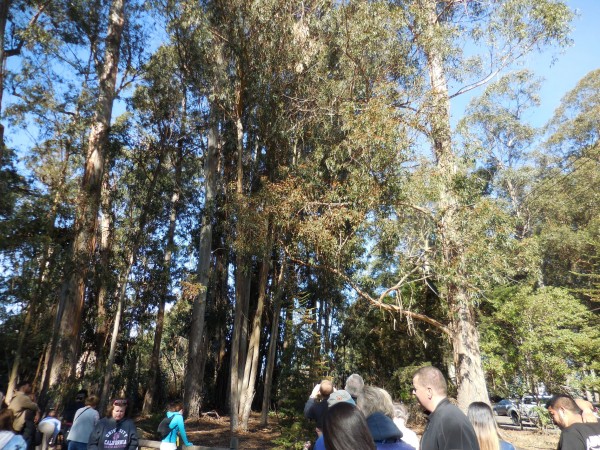