Q. How big are robins?

Q. How much do robins weigh?

A. Robins have many vocalizations—a rich, warbled song composed of long phrases, “whinny” and “tut” calls, and others.

Q. How do robins communicate?

A. Robins communicate with one another primarily by singing and other vocalizations.

Q. How can we study robin songs?

A. One important technique is to find out exactly how many times robins sing at different times of the day.

Q. How fast do robins fly?

A. Robins have been clocked flying from 20-36 m.p.h. They fly faster when migrating than when flying in our backyards.

Q. How smart are robins?

A. Robins are not quick to learn new things as blue jays, and do not have as good reasoning power as jays. But they are adaptable, and can quickly figure out how to find food and shelter in a new area where they’ve never been before. Many of their behaviors are instinctive, which makes them very adaptable but slow to learn new things.

Q. What states and provinces have named the robin their official bird?

A. No Canadian provinces have given the robin this honor, but Connecticut, Michigan and Wisconsin all have named the robin their state bird.

A. Robins were named by homesick European settlers for their beloved and familiar little Robin Red-breast, which has a color pattern brighter but somewhat similar to our robin, though the two species are not closely related.

The Robin Red-breast has a color pattern similar to our American robin, only much smaller, and the red on the breast is a bit brighter and doesn’t go as far down on the belly. The European blackbird is shaped exactly like our robin, and has vocalizations very similar. The European blackbird is very closely related to our robin—it even belongs to the exact same family and genus.

Q. What color are robins?

A. Adults are dark gray above, with their head, wings, and tail almost black, their outer tail feathers tipped with white, and their breast light brown to rich dark brick red (darker and brighter in males). Their throats are streaked blackish and whitish (more pronounced in males) and their lower tummy, where it meets the tail, is white.

Q. How do a robin’s senses compare with a human’s senses?

A. Robin vision is a little more discriminating than ours—it can see things at a farther distance, and may be able to see a wider spectrum of colors than we can. A robin can react to sights much more quickly than we can, to allow it to react as it flies through branches at 20 m.p.h. A robin’s hearing is much more finely tuned than ours. It can hear higher-pitched sounds than we can, and can hear tiny differences in sound quality that our ears just simply can’t detect. It’s sense of touch is not as discriminating as ours in some ways, though it can weave a nest with amazing accuracy relying partly on this sense. Robins can probably not taste as many flavors as we can, and they probably cannot smell as many odors.

Q. What do robins look like when they’re flying?

A. When robins fly overhead back-lit by the sky, it’s often difficult to see their color pattern, but even in very poor light the white area below the red breast is a clear and noticeable field mark. Robins have a flatter, wider profile than many songbirds in flight, and often make calls that make them easy to detect.

Q. Why do robins hop?

A. Most songbirds and other birds that spend a lot of time in trees are “hoppers.” Springing forward in a hop is an efficient way of getting from branch to branch. But on the ground, hopping takes a little more energy than walking or running. Robins are one of the few species that can do both! Robins tend to hop when grass is too high to see through. Sometimes they seem to hop just because they feel like it.

Q. What is the robin’s scientific name and how is it classified?

A. Its scientific name is a combination of the genus and species names, or Turdus migratorius. The robin belongs to:

Q. How are robins different from and similar to other thrushes?

A. Most American thrushes are gray or brown with a white underside speckled with brown or black. Robins are larger and much more brightly colored. The varied thrush of the Pacific Northwest, which sometimes wanders east, especially in winter, is brighter and fancier than a robin, with red patches on its wings and face and a black breast band. Bluebirds are smaller and colored with blue where a robin is gray. Just about all thrushes have large eyes, similar body shapes, take a lot of their food on the ground, and lay blue eggs.

Q. How is a robin’s body adapted to its lifestyle and habitat?

A. Robins have sturdy legs with muscles designed for running or hopping, allowing them to speedily evade predators and efficiently cover open ground while hunting. Their colors are bright enough to attract mates and defend territories without being so bright to alert predators too often. Their syrinx (“song box”) has complex muscles allowing them to sing rich, complex songs that can carry a long distance. Their esophagus is exceptionally stretchy to allow them to eat huge quantities of berries before nightfall in winter, to allow them to survive cold temperatures without being able to eat in the dark. Their intestines are developed for digesting waxy berry coatings and for getting most of the food value out of worms. Their wings have a pointed shape, the most common shape for birds that migrate using a flapping flight. Their tail is medium-length for quick steering as they fly through branches.

Q. Why are some robins all or partly white?

A. Some robins are true or partial albinos.

Q. Is a robin with a lot of white patches on its body an albino?

A. There are many forms of albinism. A true albino robin has no body pigments at all, including in the eyes. Birds lacking any pigments in their eyes have no protection from sunlight, and go blind when fairly young. But if a bird has normal eye pigments, sometimes it can survive a long time with pure white feathers. A bird in this situation is called a partial albino. So are birds that have white patches here and there on otherwise normal-colored plumage. In some partial albinos, white patches are perfectly symmetric. In others, they are more randomly arranged. Some birds are born partial albinos, and sometimes they develop patches of white after traumatic events, such as being attacked by a hawk. Some robins don’t have any pure white, but do appear far more pale than others. Ornithologists call this condition leucism or dilution—a genetic condition when birds produce less-than-normal amounts of normal pigments. 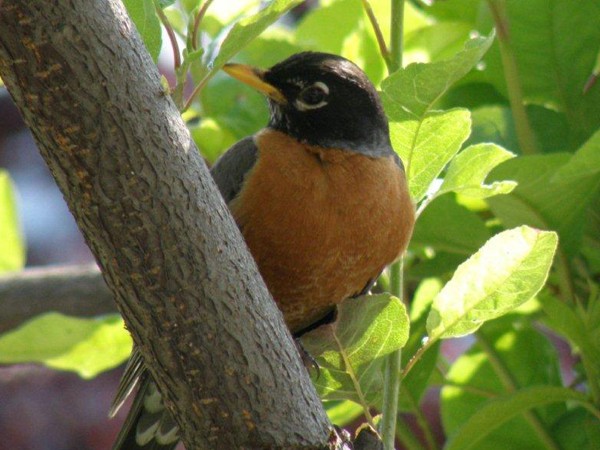 Robin in a Tree