Q. What is the range of the American robin?

A. The American robin is found over most of North America.

Q. What is the robin’s habitat?

A. Robins can be found in a wide range of habitats. You can find them in marshes, fields, forest borders, orchards, hedges, cut-over woods, gardens, urban, suburban, rural yards, and parks.

Q. What do robins eat?

A. Robins eat large quantities of worms and other invertebrates, berries and fruits.

Q. What is the robin’s role in the ecosystem?

A. Robins are omnivores. They serve as predators mostly of insects and worms, but also of small snakes and other small reptiles and amphibians. They are also fruit and berry eaters. Sometimes they eat a berry in one place, and then fly away. When they poop, their droppings often contain the seeds of these berries, so the robins can “plant” them in new places.Robins are in turn eaten by foxes, bobcats, hawks, shrikes, and owls, and crows and blue jays often take their eggs and babies. These are all natural predators. House cats, which are not natural predators because they are fed by humans and maintained at an artificially high population, kill exceptionally large numbers of robins because cats mostly stalk creatures where robins do their feeding on the ground.

Q. What are a robin’s enemies?

A. Some of the natural predators named above are enemies of the robin, though some are also the robin’s natural friends. Jays and crows eat baby robins during the nesting season, but when they aren’t stalking a robin nest, they are very helpful to robins by alerting them of even greater dangers, and sometimes chasing away hawks and owls. Robins may also consider mockingbirds, waxwings, and other birds that compete for fruit to be enemies—they often chase these birds away. Humans who leave cats outdoors and/or use lawn pesticides are probably a robin’s greatest enemies, endangering both the robins and, especially, their newly-fledged babies.

Q. What happens to robins when worms are in scarce supply?

A. Robins can easily switch from eating a lot of worms to taking almost entirely fruits, so when the ground starts getting cold in fall, robins change their diet. During droughts and other periods when worms are temporarily hard to find, robins can eat fruit. If pesticides kill most of the worms in an area, robins may stop nesting in that area.

Q. Where do robins spend the winter?

A. Some robins retreat all the way to southern Texas and Florida, but others winter as far north as they can find berries. So robins have an enormous winter range

Q. What is the American robin’s population status?

A. The American robin is recorded in every state of the United States and every province of Canada on Breeding Bird Surveys. The total population is stable or increasing in most places on a large scale, but in some urban locations where cats and pesticides are common, robins appear to be declining locally.

Q. How can there be more robins today than when the colonists first came to America?

A. When the colonists first arrived, just about all of eastern America was heavily forested, and there were few trees at all in the prairie. Colonists cleared the forests, making it easier for robins to hunt on open ground, and also introduced more species of earthworms from Europe. In the prairie, they planted trees which robins use for nesting.

A. When humans used the insecticide called DDT in the U.S., many robins died during spring migration as their bodies metabolized large amounts of body fat at once—DDT from the worms robins ate all winter was stored in their fatty tissues and all released into their bloodstream at once. This was a harmful effect, and now that DDT is banned in the US, is no longer a problem for our robins. Humans also have very positive effects on migration by planting the trees that provide food and shelter for migrants.

Q. How can we help robins?

A. Keep cats indoors, set out nest platforms for robins, stop using insecticides in lawn sprays and only spot spray weed killers rather than spraying the entire lawn. Plant the kinds of berry trees and bushes that provide abundant food for robins and the kinds of trees and shrubs that provide good cover for nesting. Set out bird baths and set out robin feeders.

Q. How can we make a robin feeder?

A. Robins never visit bird feeders for seed, because they just don’t eat seeds. But some robins do learn to visit feeders to take berries, chopped up apples, and mealworms. You can also offer mealworms in plastic dishes or acrylic window feeders.

Q. What are the biggest dangers robins face?

A. Most robins die from cats, hawks, and other predators. They also perish from accidents such as flying into windows, getting hit by moving cars, being electrocuted, getting infectious diseases, and being poisoned. Chemical insecticides can be very harmful to robins. If you use lawn sprays, be sure that they don’t have insecticides as well as weed-killing herbicides and fertilizers.

Dangers facing robins include (from most dangerous to least):

Q. What are good trees we can plant that provide food for robins?

Some summer berry trees include: 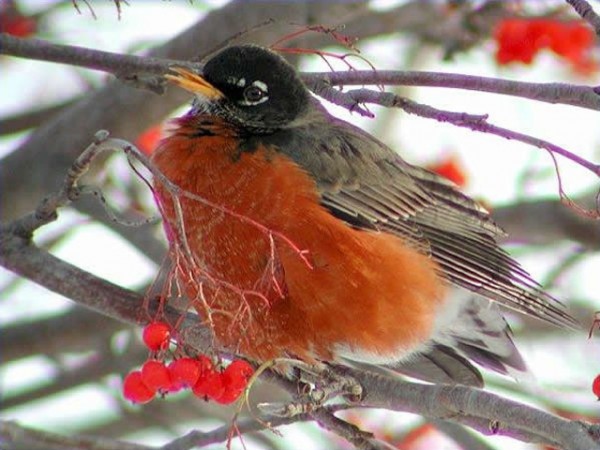 Robin in a crab apple tree in winter