Q. How long do robins live?

A. Most robins die their first year. But the lifespan goes up dramatically for the ones that survive that critical time, because they’ve learned so many important life skills. Of those that survive their first year, most wild robins live to be about 5 or 6. As of February, 2001, the longest-living banded wild robin ever recorded had survived 13 years and 11 months, according to the Bird Banding Laboratory at the Patuxent Wildlife Research Center. In captivity, robins have survived longer than 17 years.

Q. How old are robins when they mate?

A. Almost one year old. Robins are mature adults and ready to breed in the spring that follows the spring or summer they were born.

Q. Do robins mate for life?

A. No, robins do not mate for life. Pairs usually remain together during an entire breeding season, which can involve two or three nestings. However, in spring, sometimes a male and female who mated the previous year will both return to the same territory and end up together for another year. This happens most frequently when they were successful raising babies the previous year.

Q. How long do robins stay in the egg? (egg stage)

Q. How long do robin babies stay in the nest (nestling stage)?

Q. When do young robins learn to fly? (fledgling stage)

A. After leaving the nest (fledging), it takes another 10-15 days for babies to become strong fliers and independent birds.

Q. How long does it take a robin to go from egg to independence?

A. Here is a summary: 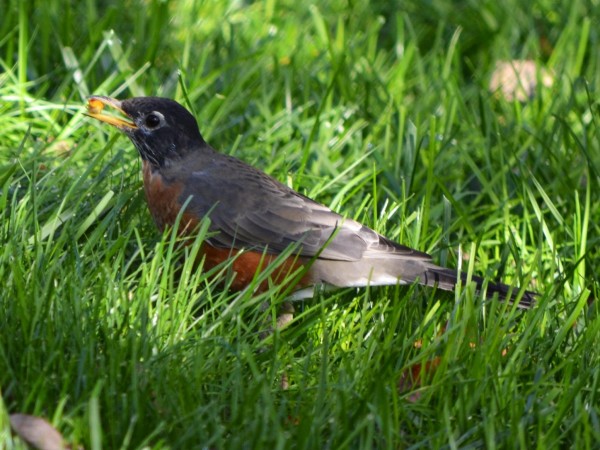