The news was breath-taking. When the results of the Xerces Monarch Thanksgiving and New Year counts were announced, we were devastated to learn how badly the California overwintering monarch population had been shattered. With the Covid-19 pandemic fracturing our daily lives, how can it be possible that the Western monarch population has plunged so rapidly? Despite our initial panic, we are resilient, and we aren’t giving up our quest to help monarchs prosper. So, we empower the winter season as a time to look at the Western monarchs still around us and watch what they are doing. That is exactly what your Journey North report is all about. It’s more important than ever to compare their current behavior with what we’ve seen in earlier years; to put them together like pieces of a puzzle to give us the bigger picture. We begin today with an overview of the broad strokes of the Western monarch overwintering behavior witnessed in the region this winter.

We don’t normally associate overwintering monarch activity with the San Francisco area of California. Usually, they are nestled in the safety of coastal trees in pockets further south. But Dr. David James from Washington State University noticed more monarchs reported this year in the San Francisco region and they were breeding throughout the winter months. This is further north than usually seen. By monitoring I-Naturalist reports of monarch adults, larvae and pupae, he noted that since 2015 there has been a “huge (>5X) increase in observations in 2020 compared to each of the previous 6 years.” So, he waited and then reviewed reports for January.

“I have now extracted data on monarch reports for January 2021 and compared them to the previous six years (see graph). Once again, the data show a large increase in reports of both adult and immature stage monarchs during the past month in the SF Bay area. In fact, the increase is greater than for Nov-Dec. The average number of larvae/pupae reported on I-Nat during January from 2015-2019 was 1.0. This year the number was 63. Similarly, an average of 5.0 adults were reported for January during 2015-19, yet this year there were 58 sightings reported to I-Nat. Of course, some of this increase can be explained by increased use of I-Nat in these Covid times to report sightings, but I doubt that this explains it all. Interestingly, there were signs last January of an increase in sightings when 10 larvae and 12 adults were reported. But the numbers in January 2021 are on another level.”

Since both the Xerces Monarch Thanksgiving and New Year’s counts recorded sharp declines at the known overwintering sites, what could the monarch breeding activity in the San Francisco Bay area mean? The Fall and Winter of the 2020-21 seasons are experiencing a change in the normal weather pattern, a La Nina weather phenomena, that is often a harbinger of above normal temperatures and below normal precipitation in this portion of the West. Could this be affecting monarch activity this season? What could this mean for the spring migration? Dr. David James shared his thoughts.

“In fact, there appears to be a flush of new adults and egg laying. This apparent new generation is likely to be the sons and daughters of the migrant generation that eschewed spending winter at the conventional overwintering sites, in favor of reproduction. I believe the well-being and survival of eggs being laid now and over the next few weeks in the Bay area will play a role in determining the size and extent of western monarch populations this summer. With only 1914 monarchs at overwintering sites (50% sex ratio = estimated 950 females), current Bay area breeding populations may well support at least this number of females. In Palo Alto, 35 miles south of San Francisco, there is at least one community garden where a population of maybe a dozen monarch females are laying hundreds of eggs on chopped down milkweed stalks! In late January Karen Krimmer kindly provided photos and made some counts. She counted 100-200 eggs on different days but noted more eggs keep getting laid. These females are ‘egg-dumping’ a term used to describe excessive egg laying on a limited supply of milkweed. In this case, basically there are only stalks for the females to lay eggs on. Some new growth is slowly appearing on the Physocarpus milkweed (Swan plant), but it will not be sufficient or rapid enough to feed all the caterpillars that are likely to result from this concentrated bout of egglaying. Nobody knew this was going to happen of course, and the milkweed was cut to minimize OE parasite problems.”

Colder temperatures typical for the winter season will slow the growth cycle. We will watch Journey North reports for continued activity in the area as the season progresses. How many other sites in the area have seen increased monarch breeding that can support the Spring migration? Your reports can provide the missing clue.

Judy Lee noted this presence of monarchs as well in the Northern California region in her Journey North report of 2 monarchs at the Morcom Rose Garden in Oakland, CA.

The large number of breeding monarchs in the San Francisco region wasn’t the only winter surprise. Dr. David James reports,

“Brookings, Oregon, is nestled in the far SW corner of Oregon. This year, for the first time, [tagged] monarchs have been reported flying in Brookings in January! One was sighted on January 5 and two others seen a few days later. They were part of a late generation of caterpillars eclosing into conditions that were not strongly inductive for migration. The prime cue for inducing southerly migration is most likely the rate of daylength decline, and this rate in late October is sub-optimal for migration. Thus, these [tagged] butterflies remained in Brookings.”

We often think of tagging monarchs to help us learn migration flyways but this shows the value when we can confirm monarchs staying by their tags, rather than migrating, for the season.

Despite the late time of year, monarchs were still eclosing in December in Southern California. Much is still unknown about the breeding and migratory patterns of monarchs in this warm portion of the state, so reports are especially important to track patterns and trends that are noticeable over time.

“I still have about 13 chrylis [sic] that need to come out. One live birth today, a female. Most of the births in my courtyard over the past two weeks have been male. They normally do not over winter here, but last year was the change up. Even after I cut my milkweed back, they hung out and laid eggs. I had four generations by the time the first generation normally comes back in late May. The winter generations are about 45/55 live vs defected. We have frost nearly every night.”

What roll did a major heat wave in January play in monarch breeding in the region?

Andrew in San Diego, CA, saw one monarch on January 15.

“Adult investigating our hillside pollinator garden. Took a rest on a pine tree before moving on. This day was unseasonably warm – officially 86° but at 90’s in some areas of town.”

Reporting temperatures or unusual conditions with your monarch sighting helps us all understand the conditions where and when they are seen.

More detail in reports helps us learn more about monarch sightings in the area. For example, you can note the time gap in your last sighting of a larva and the freshly eclosed monarch.

Stephanie saw a monarch in Arroyo Grande, CA, on January 18.

“I found a female around 3 PM outside today, looks like she had enclosed 3 to 5 hours before. Not soon after, I saw her take her first flight. Last year I was present for about 100 enclosing, this year, five. I had no idea there was a chrysalis outside, such a surprise!! The last cat I saw was at the end of November.”

Monarchs in Arizona are complicated. Every winter the Arizona lower deserts hosts small numbers of monarch butterflies, some breeding and others nonbreeding. The Southwest Monarch Study began new research to understand their survival strategies based on earlier Journey North reports. Volunteers in the Phoenix area reported weekly monarch activity, local temperature and weather conditions to see any relationship to the weather conditions over time. When present, monarch eggs, larvae and pupae were also reported to track the longevity of the immature state but also their survival rates. Day temperatures so far have varied from 50° to 78° but night temperatures have hovered in the low 30’s at times to the low 50’s. We’ve learned that eggs laid in early November may not eclose until early February, a much longer time than we see in the warmer season. We’ll continue to report our observations as the season continues.

This winter most of the reported monarch activity was in the Phoenix area. But in recent years Tucson has many winter sightings as well.

Sheila observed a pattern in her milkweed patch report on January 17 in Tucson, Arizona.

“I have seen anywhere from 1 to 4 monarchs on my milkweed. Two have weathered wings, one is a young small female, another is a male and not certain of the other two. They keep returning on sunny days. I will try to track them more carefully. This is the first time in five years that I’ve seen any of them winter over.”

Walter in Chandler (in the greater Phoenix area) spotted two monarchs on February 4.

“Saw two monarch butterflies today on my walk. Just passing through on the way to somewhere else.”

How YOU can help!

While the overwintering numbers of monarchs along the California coast are low, there are still small numbers of monarchs scattered across the warmer areas of California and Arizona. Your reports of their activity are critically important this season. Keep your phone or camera with you on your walks to document any monarch activity and report any sightings. As temperatures warm, monarch activity will increase and movement out of the coastal and desert areas will be more apparent in March. When you can, expand on what you see – do the monarch’s wings look fresh and new or worn, what flowers are in bloom – and don’t forget to report milkweed that is emerging or flowering. Early spring refueling nectar is important since monarchs will lay eggs on milkweed before it flowers. If you live in the lower deserts of Arizona and California where there is evergreen milkweed, report and photograph the fresh new growth or flower buds where early breeding monarchs like to lay their eggs, too.

We look forward to hearing from you this Spring! Weekly Western Monarch migration reports begin in March and we’d love to feature your observations. 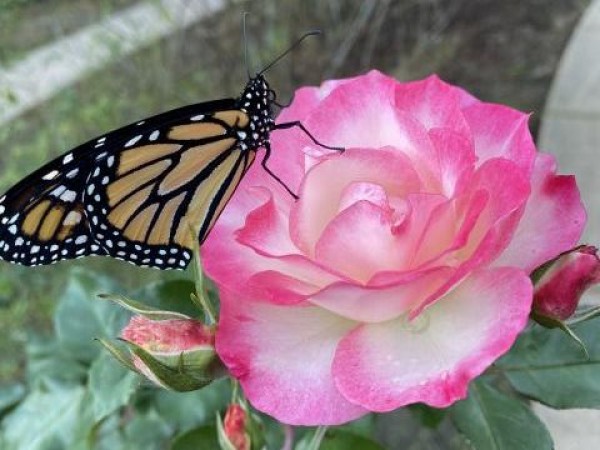 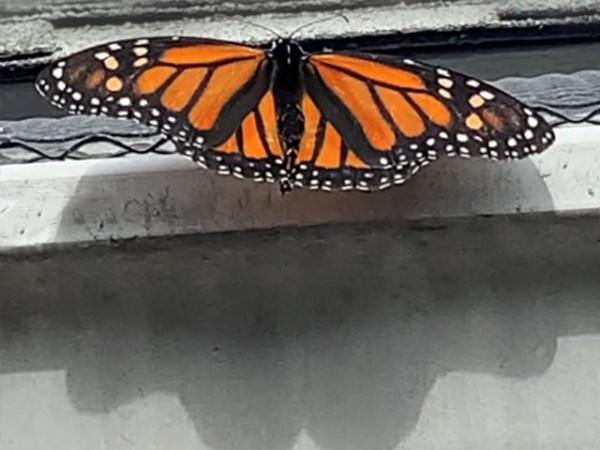 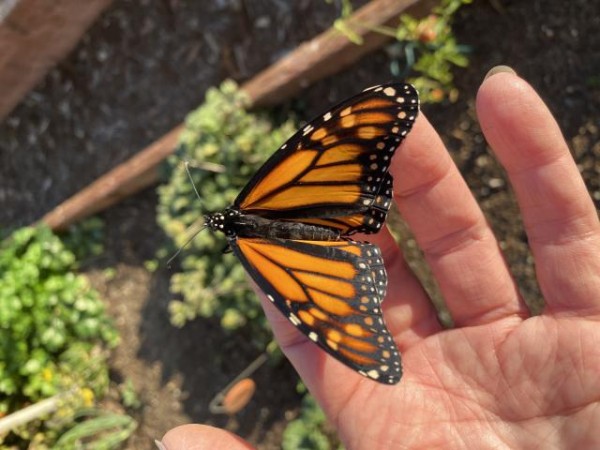 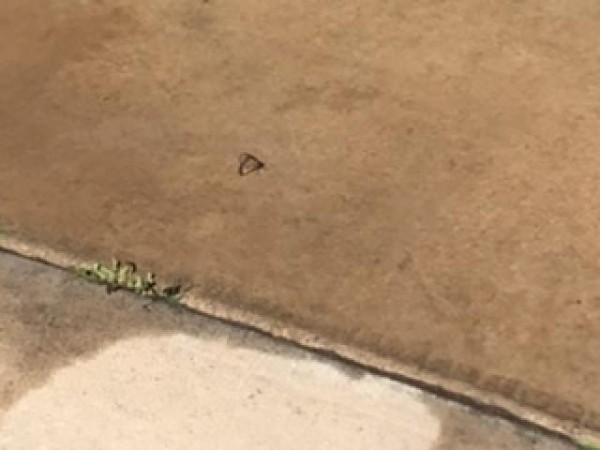