Monarchs Across the West!

Monarchs reached across all the Western states this week and entered Idaho for the first time! Citizen Science reporters shared detailed encounters. You can join them in their yards and in the field. Dr. David James explains his summer monarch breeding forecast. Think about where YOU might see monarchs in the West this summer!

Peggy reported three monarchs in Nipoma, California on June 3. “One Wes noticed emerging from its chrysalis.”

This wasn’t likely what Marta wanted to see in her yard on June 7 in Camarillo, California.

“Our dog came back to the patio with a colorful lump…a monarch…that must have just hatched somewhere in the garden. We unfolded the wings and let it hang on a branch. Its wings straightened out…[and] started flapping…” Lucky this monarch looks okay.

In most years, monarchs first begin to appear in the northern half of Nevada in late May or early June. Penelope reported her first egg on June 2 in Gardnerville, Nevada.

“A monarch spotted May 30 in Gardnerville 5 miles away and photographed for local newspaper. Spotted again in my garden milkweed on June 2 and egg found. Egg hatched this morning 06/08/2020.”

The weather has turned cold and rainy again in northern Utah with rain and near freezing temps at night. Because this weather may have slowed local monarch migration and breeding, Becky was doubly grateful to see her first monarch in the northern region of Utah in Nibley on June 3.

“An adult passed through my yard…I live along a river with a canal on the backside of 2 acre property. My yard has milkweed and nectar-rich plants and, subsequently, attracts a lot of female monarchs that lay eggs. The temp was about 83. Sunny with little wind. Other species breeding during this time are painted ladies and western tiger swallowtails. I live in a valley surrounded by tall mountains, hence the later date of arrival compared to other portions of northern Utah.”

The sheer number of eggs was surprising! Rachel in Salt Lake City, Utah, found more monarch eggs on June 4 in her yard. “Found an additional 14 in my waystation tonight - total of 17 for the day. They must still be first generation, and I haven’t seen this kind of activity for 4-5 years!”  We asked Rachel for her thoughts about the monarchs she is seeing in the area.

“We are cautiously optimistic in the greater Salt Lake City area after such early sightings and eggs found on mostly showy milkweed.  We normally don’t see eggs until mid to late June, and the first sighting this year was by Adrienne on  May 15, followed closely behind by others along the Wasatch Front.  I have three large waystations in the area, and two of the three have had many eggs, and the first chrysalis found June 7 in my yard. My last adult sighting was a weathered looking female on June 5 as she left my side yard heading over the fence to the north.  Keeping our fingers crossed this is a good sign of a strong season ahead!”

Eric shared a detailed observation in Juntura, Oregon on June 1, when he found one monarch in the air. Are monarchs reaching Washington? Be sure to report when you see them!

CM saw the first monarch of the year in Weiser, Idaho, June 4. “It was an adult, flying thru my yard. I have seen several flying in the area. Unsure if it’s the same one or multiple.”

Migration in the Pacific Northwest

“We are in the second week of June and nearing the end of the period when monarchs actively migrate northward. Historically, Monarchs first appear in WA and BC [British Columbia] during the first week of June. Once we reach June 15, the daily increase in daylength becomes too small to stimulate significant migration. So as of June 9, where are we now with monarchs in the west? Well, the good news is that there have been 5 confirmed sightings in the PNW [Pacific Northwest] since June 1! The bad news is that none of these have been further north than central Oregon. So 2020 is likely to be similar to 2019 in terms of the size of the monarch population in WA, BC and ID during summer. Only 8 monarchs were confirmed in WA during 2019 and most of these were from near the OR/WA state line. Hopefully the few monarchs that make it into the PNW this summer will have good conditions for successful breeding.”

This is our last weekly report of the Spring Migration season, but your observations are even more valuable during the summer months! During the warm days of summer, monarchs can often be found in the higher elevations in Arizona, Nevada and Utah as well as Idaho and hopefully Washington this year, too. So look for them if you travel this summer at the Grand Canyon and other Western National Parks and recreation areas. Report sightings to Journey North so we know where you are seeing monarchs. Don’t forget photos, too.

Remember to take your camera when you are traveling or on a hike. Share your story with us and we’ll be back to share your reports as the Fall Migration begins. Thank you for all your observations! We look forward to sharing your stories again soon. Look out for information about the Monarch Bioblitz this summer and submit your observations to Journey North. Happy summer! 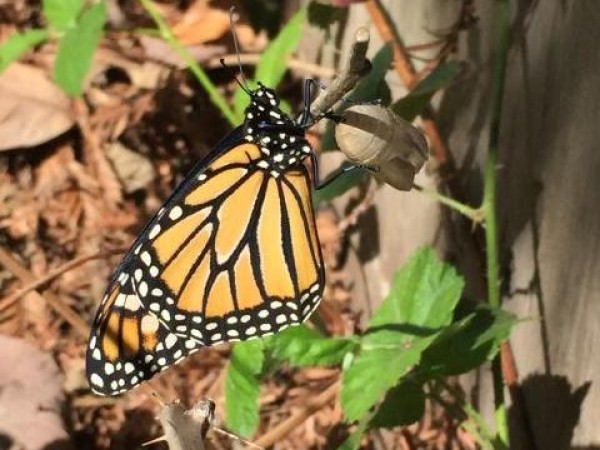 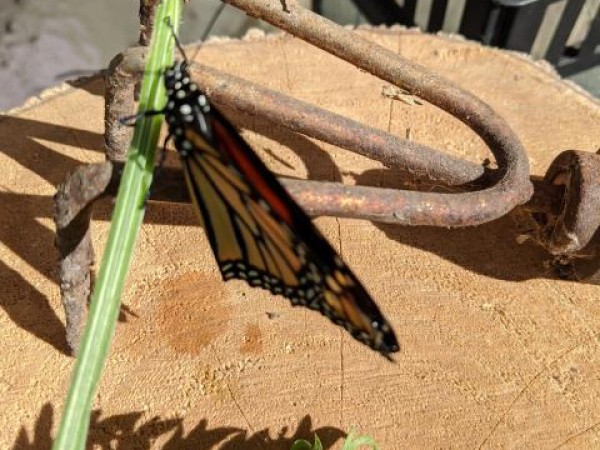 Hatched Somewhere In The Garden 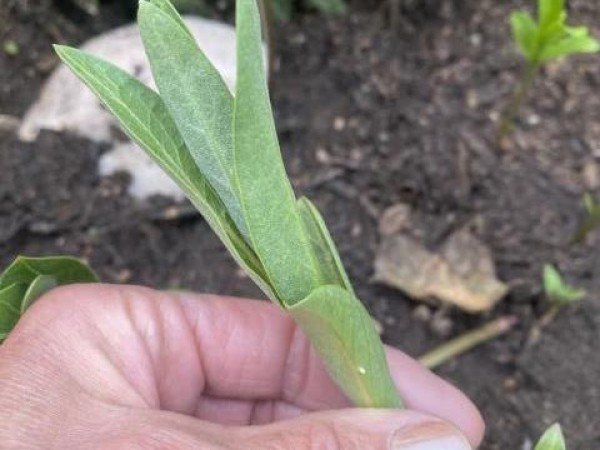