Note: Observations highlighted in this report are from October 1–October 6. To explore more recent observations, check out “The Leading Edge” section of the news update and explore our maps.

As monarchs move nearer to their overwintering sites, community scientists reports frequently include multiple numbers of monarchs or singletons flying through in succession. A storm system slowed down the migration for a few days this week but soon northerly winds will help monarchs soar closer to their destination. Monarchs are already flying along the California coast!

A sample of recent sightings in the West – Thanks to the many observers who provided more sighting details and photos this week!

Daniel found monarchs in Lompac, California, on October 1. “20 Monarchs along the coast!”

In Middleton Idaho, Ann, saw one monarch in her garden. “One adult fluttering around our garden for 15 minutes around 5 pm. (MDT). He seemed to like the marigolds.”

On October 2, Stephen in Helendale, California, found monarchs while golfing. “Was playing golf and spotted 3 Monarchs. Was able to take one picture when one landed on the course.”

On October 3, Darleen in Gilbert, Arizona, saw one monarch.  “Worn out looking male with tattered wing spotted with a large group of queen butterflies I had been watching all day in my butterfly garden. I noticed a new butterfly that looked like a Monarch so went to grab my phone to take photo. First Monarch of the Fall season in my yard.”

Claudia reported 3 monarchs on October 5 in Peoria, Arizona. “3 Monarch males seen in my Peoria, AZ pollinator garden 3:40-4:18pm, sunny, temperature 88F. Only reporting 2 as one could be one I reported early afternoon, so 3 or 4 males today. This is peak migration through AZ. Listing this as male #3, nectaring on Red Bird-of-Paradise. All very active, several times all 3 chasing one another. Could never capture all in same photo.”

April lives in Casa Grande, Arizona, and reported 1 monarch on October 6. “7:30am, nectaring on desert willow tree. 65 degrees, sunny. Rains yesterday. First sighting of the season here after seeing many queens this past month.”

Della in Peoria spotted 2 monarchs on October 6 as well. “At 8:30am on 10/6/21 and then at 9am I saw two separate Monarchs. The first one appeared from the Cottonwoods and Goddings Willows at Skunk Creek flying purposefully from west to east, about 20 feet above ground. The second appear flying from North to South along the line of trees at Skunk Creek, about 20ft high, dipping in and out of the trees and finally flying south. It was about 85F, sunny no breeze.”

Migration sightings of multiple monarchs in the West are exciting, so take a few moments to absorb the phenomenon. Grab as many details as you can remember and consider adding them to your report. How many monarchs do you see? All at once or you can count monarchs flying overhead over a set time interval of your choice. If the monarchs are close enough to see, what is their wing condition? Are the wings fresh and new with vivid color or worn and tattered? Can you tell the gender? Do you see male and female monarchs feeding on flowers side by side? Did you experience a female monarch laying eggs or only nectaring?  Do you see 3 or 4 monarchs (or more) roosting nearby each other in a tree as dusk approaches or in early morning while it is still cool? (Frequently they can be found on the Southeast side of a tree or shrub so they can quickly warm in the morning sun.) Or, did several monarchs spend the night right on a rabbitbrush or other shrub in flower? These are just a few of the ways you can describe what you are seeing this special time of year.

Here is an adult monarch sighting I reported to Journey North—the first monarch in my backyard this season as just a sample since I had more time to observe this week. This time I was able to monitor her for awhile while I was gardening. I was curious to see if this female monarch would return the next morning to lay eggs or if she was nonbreeding as hoped for the migration. You can read my report and photo here.

Cooler weather is forecast next week and will likely trigger monarchs to hurry on their way. Keep a camera in hand to document any monarchs you see or that fly by. Include as much information as possible such as what the monarch was doing, feeding on, or any noteworthy find. Thank you for your support. Your contribution of data increases the understanding about monarchs. 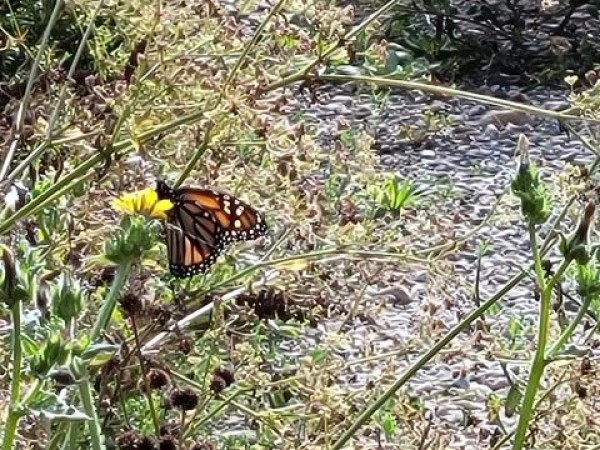 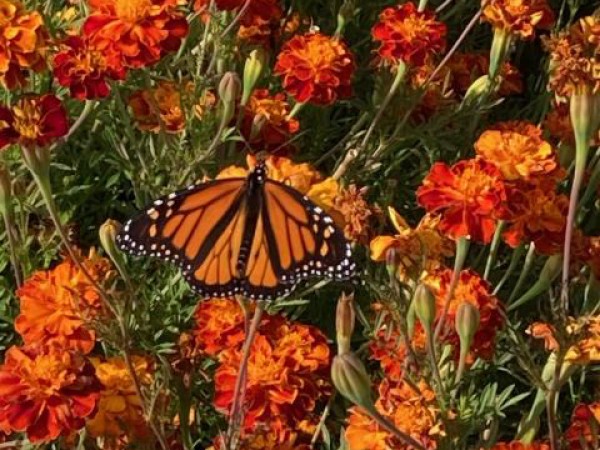 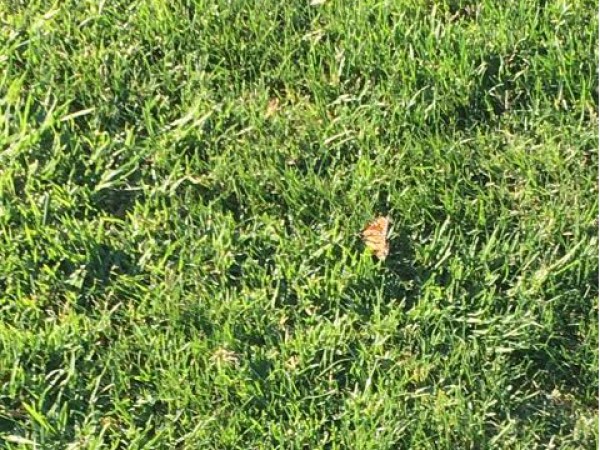 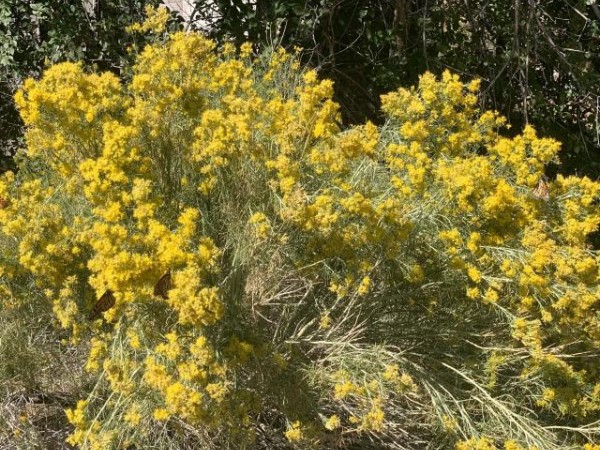 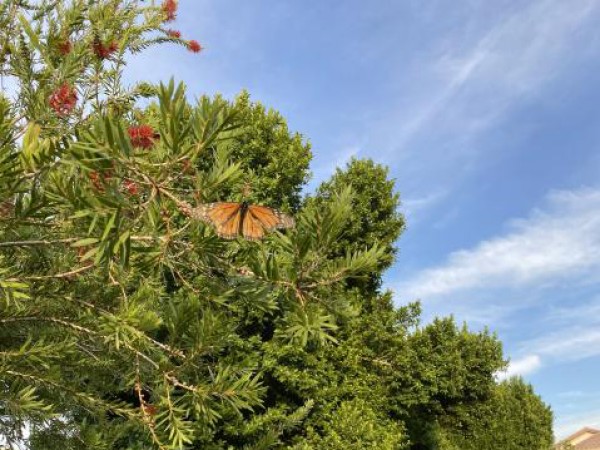 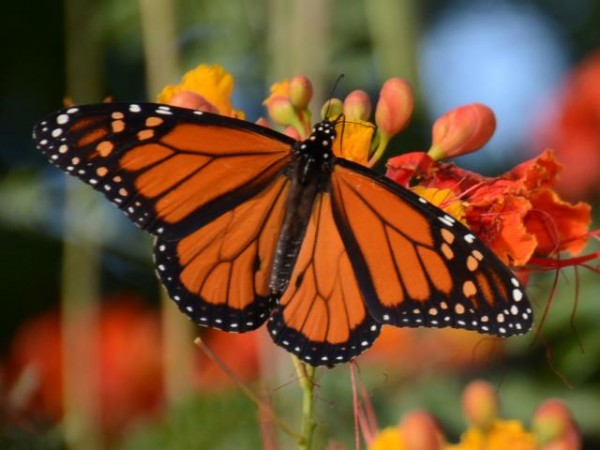 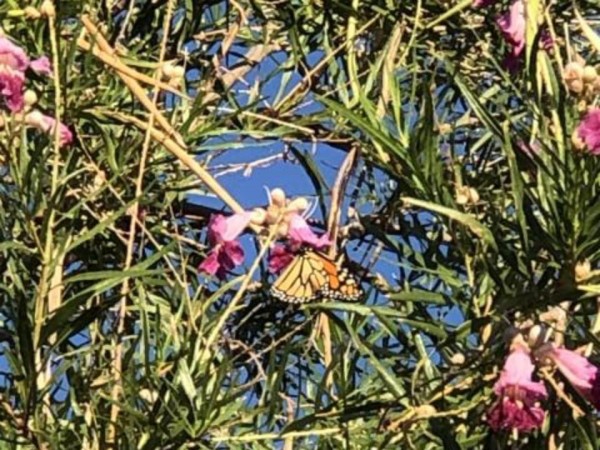